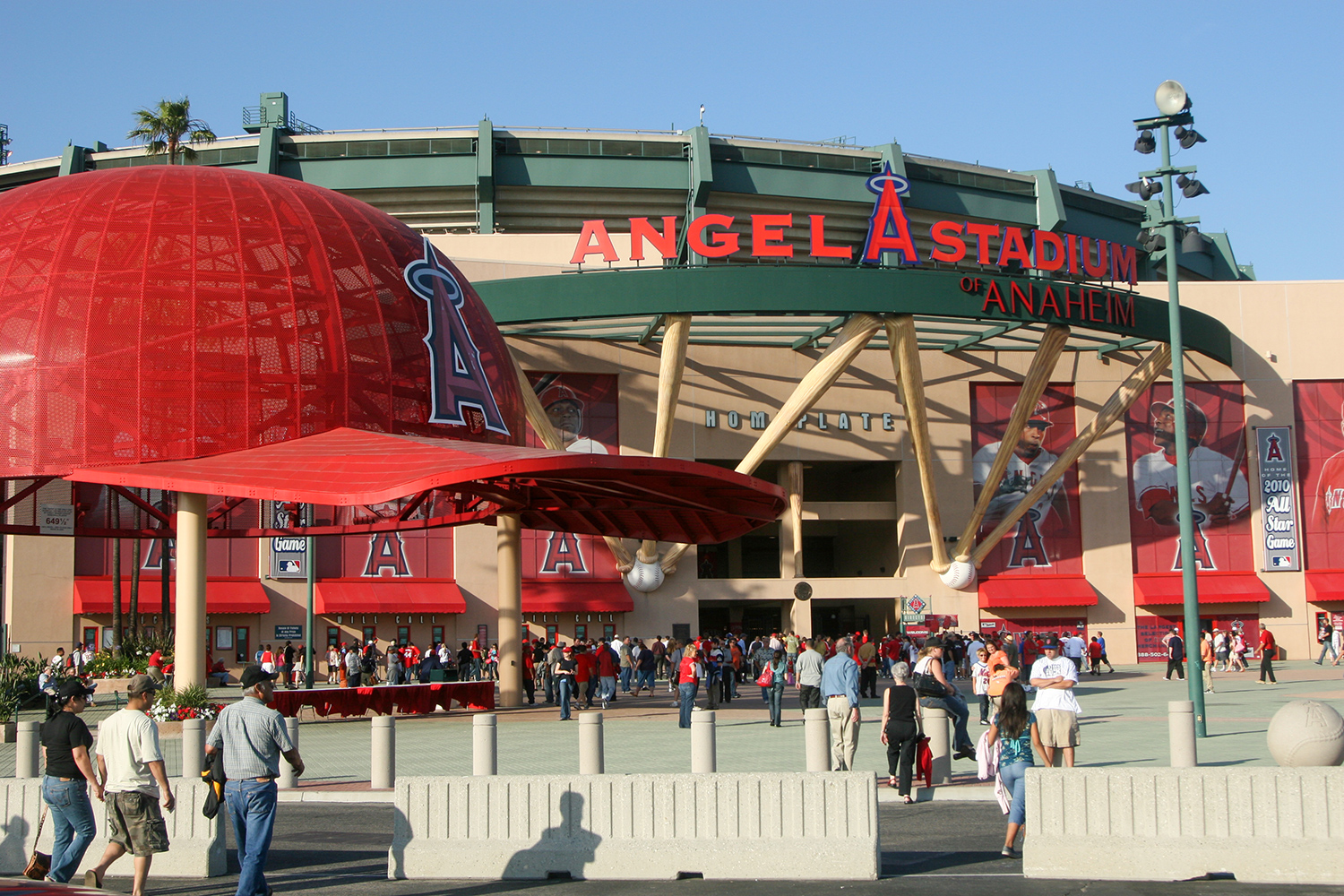 Angel Stadium, the home of the Los Angeles Angels of Anaheim in Anaheim, California on June 16, 2008. (Photo: Gordon Donovan)

After spending their first five years of existence playing at Wrigley Field and Chavez Ravine, the Angels landed in their new home in Orange County. Since opening the doors for its first exhibition game Apr. 9, 1966, Angel Stadium has played host to some of the Club’s memorable events including seven Western Division clinching games (1979, 1982, 1986, 2007, 2008, 2009 and 2014), three All-Star Games (1967, 1989 and 2010) and the 2002 World Series, including the Angels’ Game 7 victory over the San Francisco Giants to clinch the franchise’s first championship.

Presently, Angel Stadium sits as baseball’s fourth-oldest ballpark, trailing only Boston’s Fenway Park, Chicago’s Wrigley Field and Los Angeles’ Dodger Stadium. Affectionately known as “The Big A”, Angel Stadium has seen over 119 million fans pass through its gates since 1966, including a current stretch of 17 consecutive seasons of three million fans, a streak only the Angels and Yankees have achieved since 2003.

After an Aug. 31, 1964 groundbreaking ceremony, Anaheim Stadium, as it was originally known, was completed in 1966 at a cost of $24 million. The facility’s centerpiece was a giant A-frame scoreboard standing 230 feet high and was the source of the stadium’s nickname.

Anaheim Stadium underwent construction to enclose the stadium in 1979 for additional seating to accom- modate the Rams’ football games. Seating capacity was increased to 64,593 for baseball and more than 70,000 for football. A total of 108 executive style boxes were added to surround the rear of the Club Level. In addition to the Stadium Club, there were two other private dining areas designed for groups — the Stadium Pavilion and the Football Press Box.

At that time, the Big A board was preserved and moved to the edge of the parking lot adjacent to the Orange Freeway behind the right field area.

When the Rams left for St. Louis, Anaheim Stadium’s primary tenant remained the Angels, who originally signed a 35-year contract (through 2001). Renovations began Oct. 1, 1996, to revert the 30-year old structure back to a baseball only facility and the ballpark was renamed Edison International Field. The total cost for the stadium renovation was estimated at $100 million and the project was completed in time for the Angels' Opening Day, Apr. 1, 1998.

New enhancements were added all around the ballpark but perhaps the most noticeable is the center field waterfalls and rock formation that come together to form an “A”. Settled inside the waterfall’s rapids are water geysers that originally shot water into the air whenever an Angels player hit a home run. 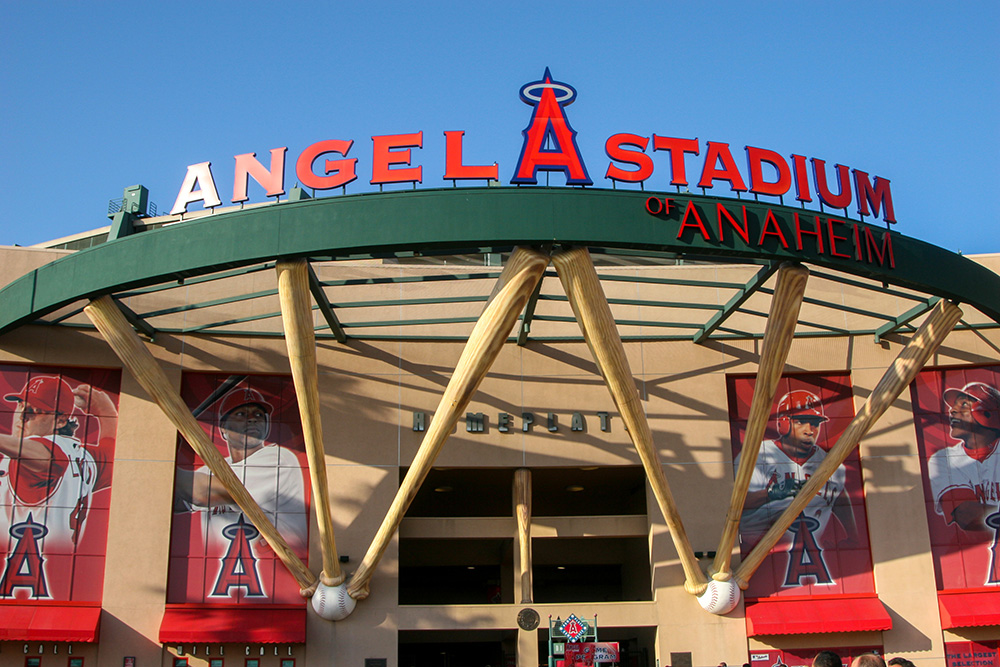 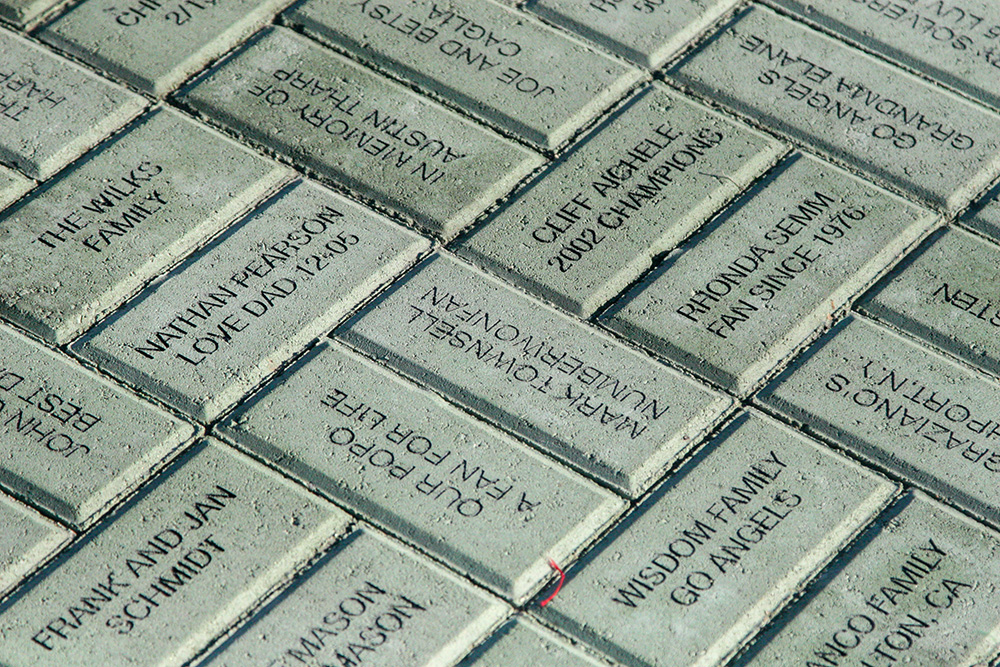 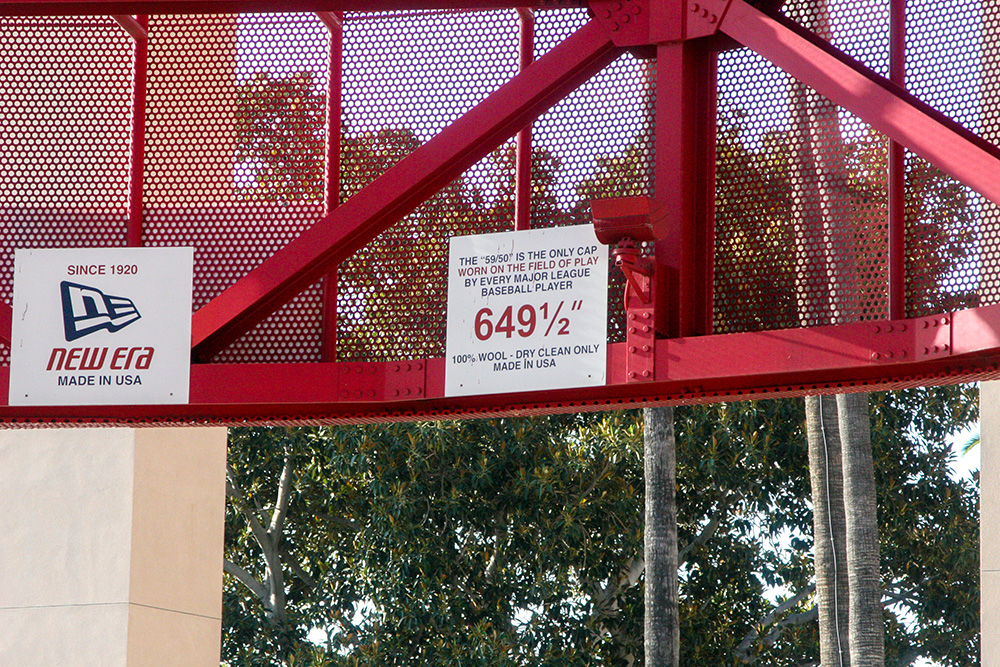 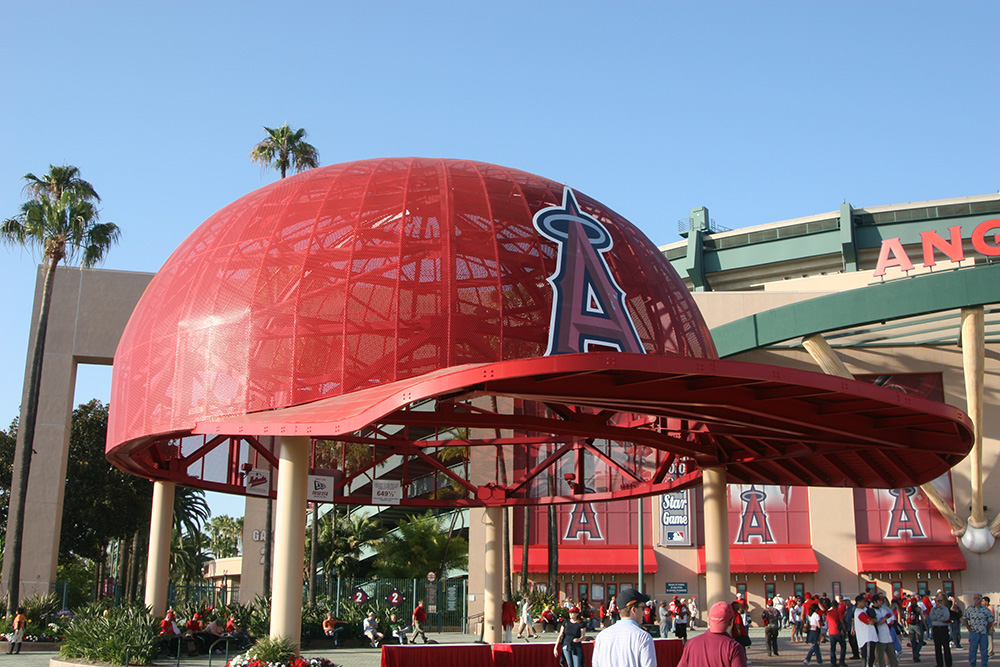 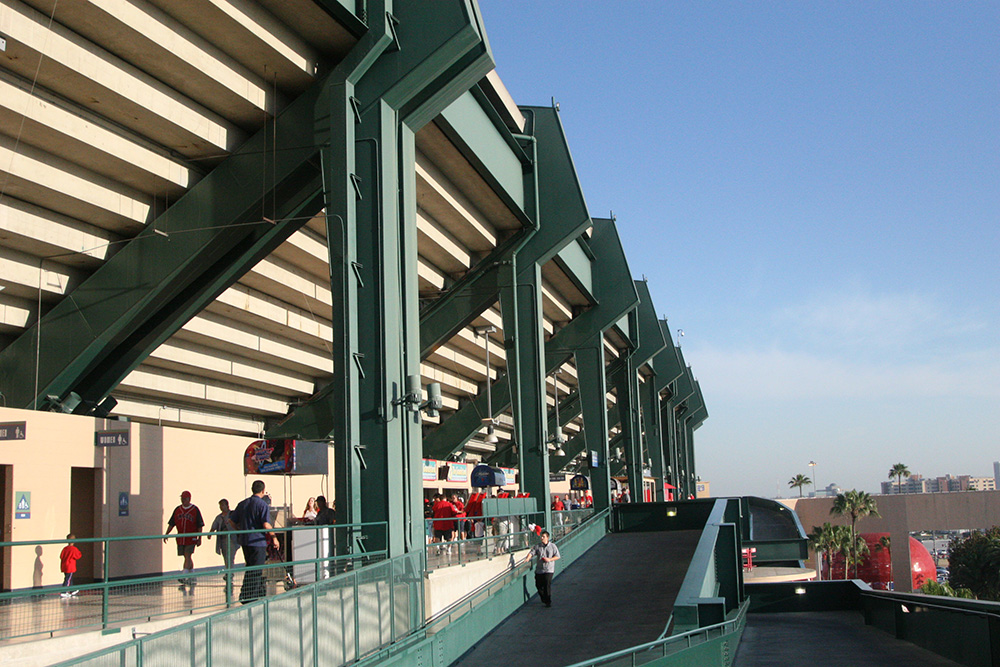 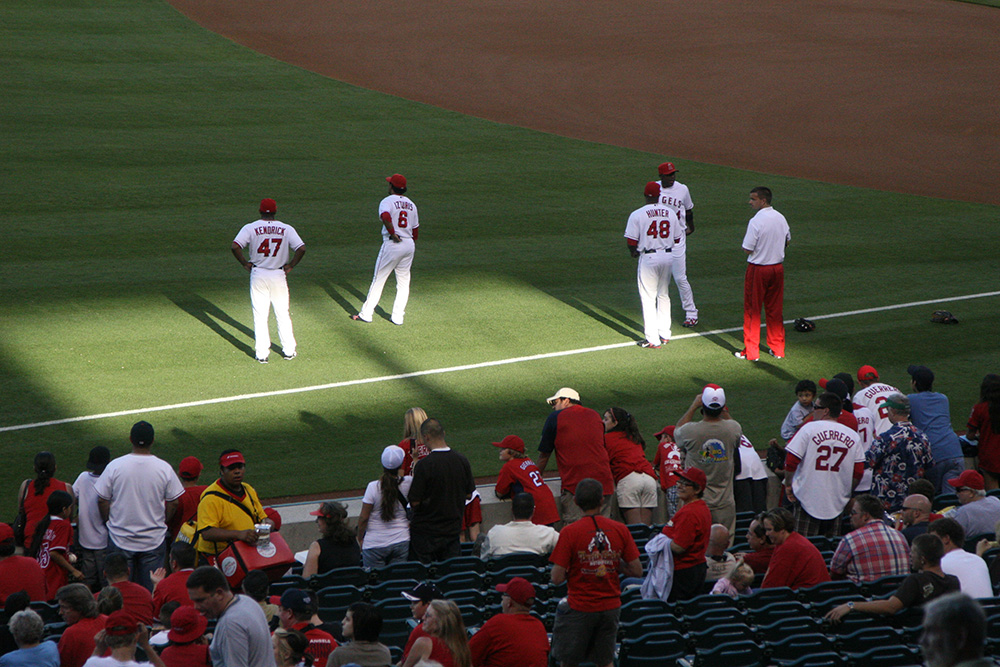 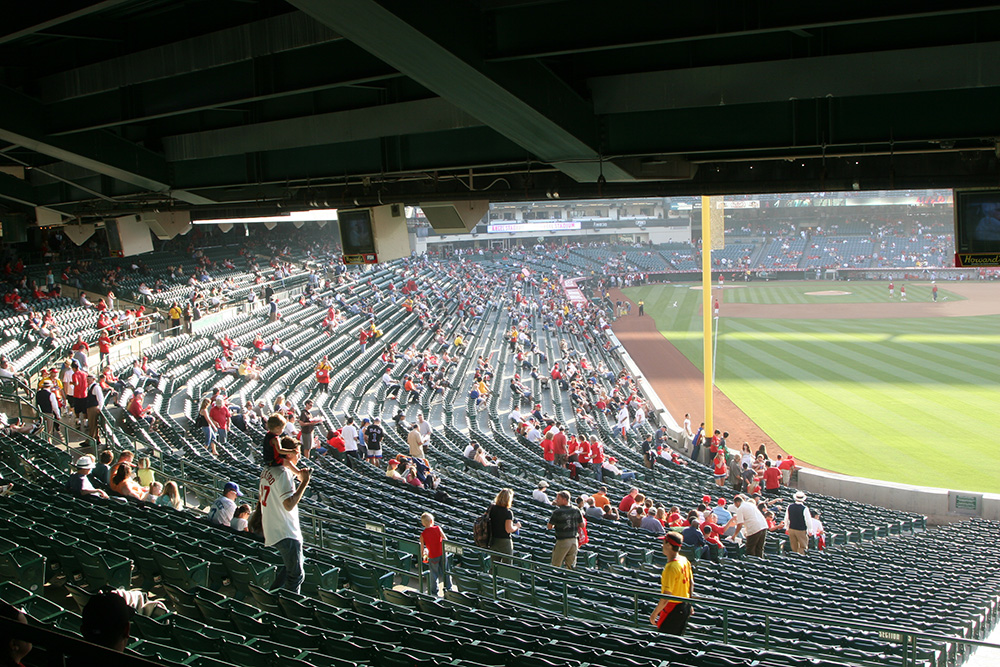 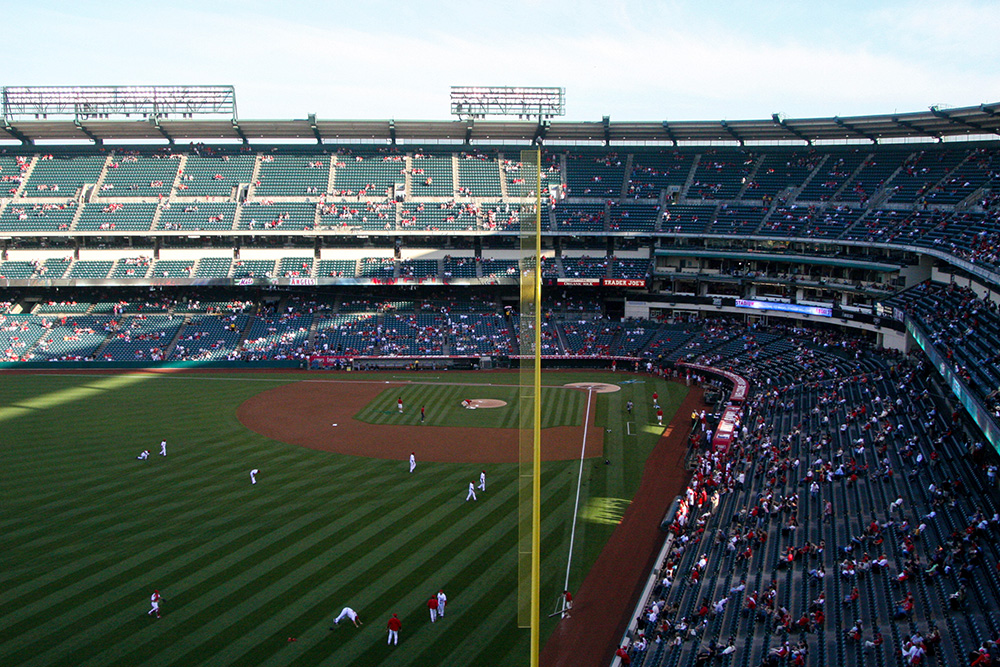 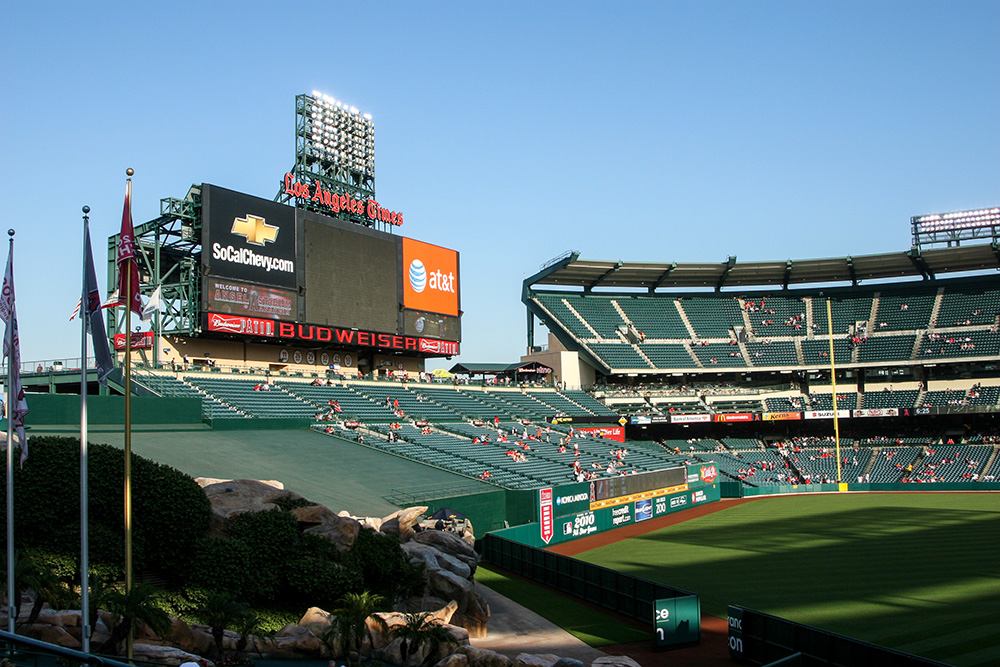 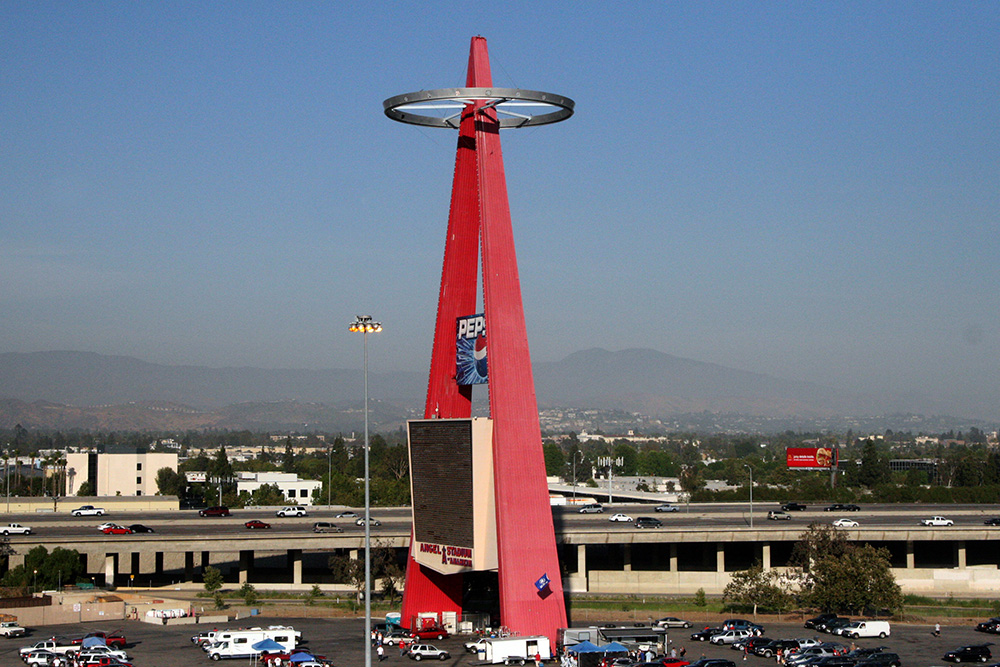 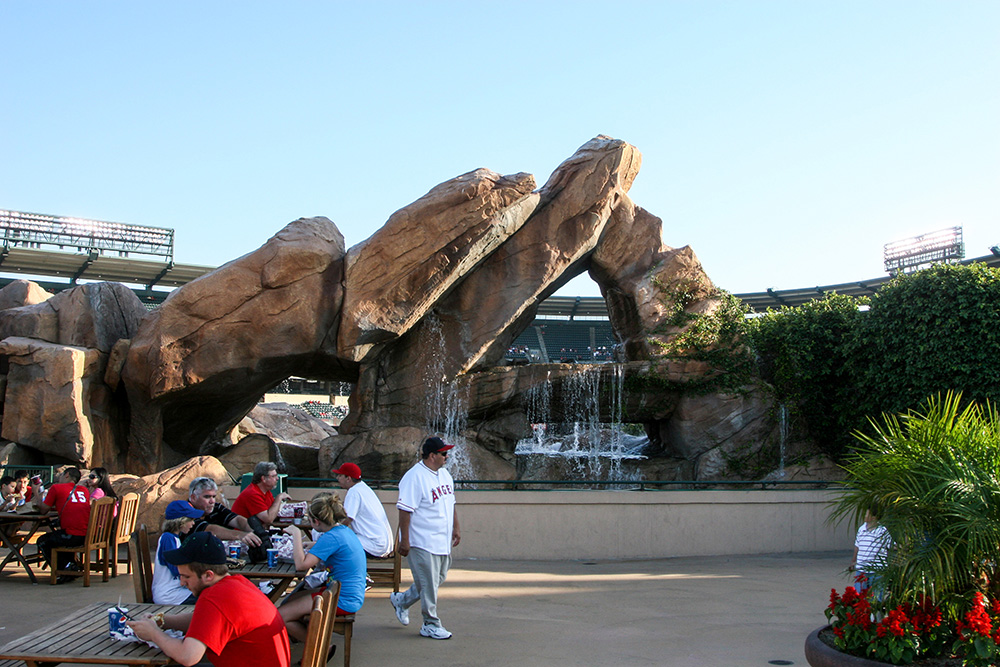 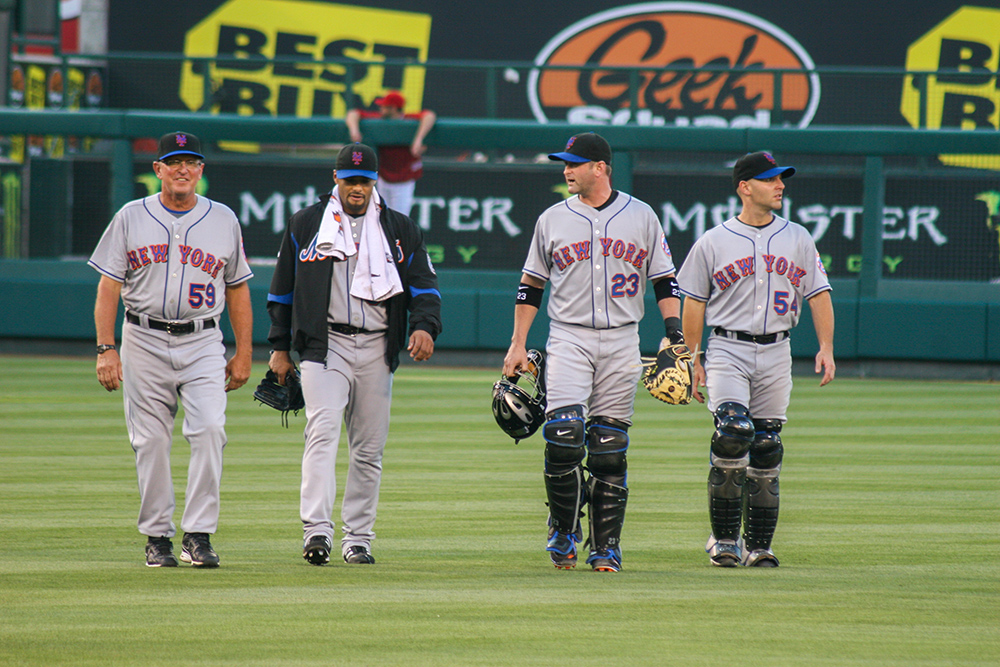 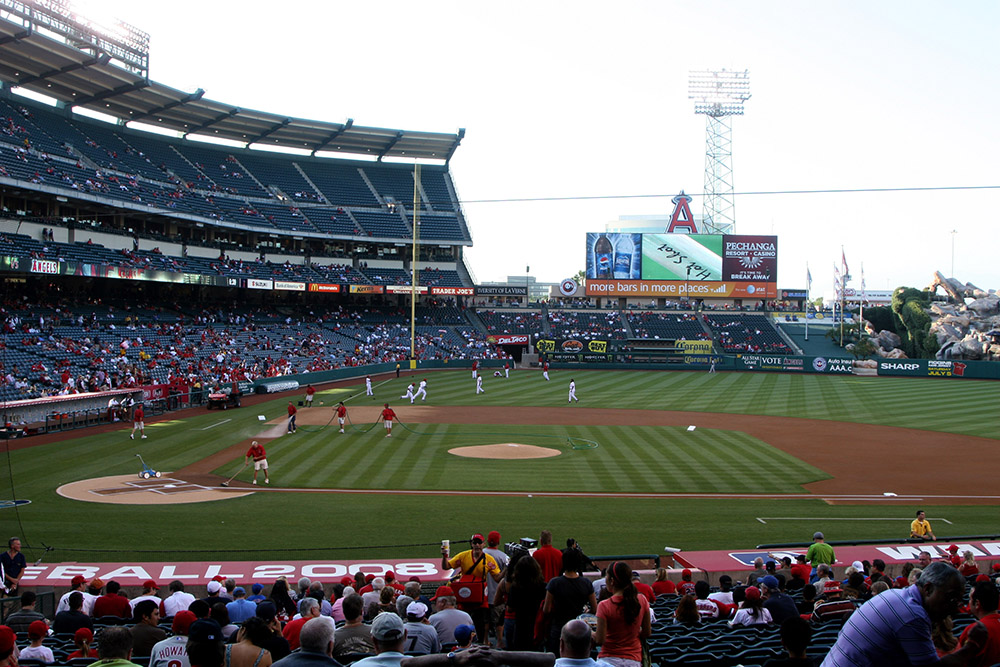 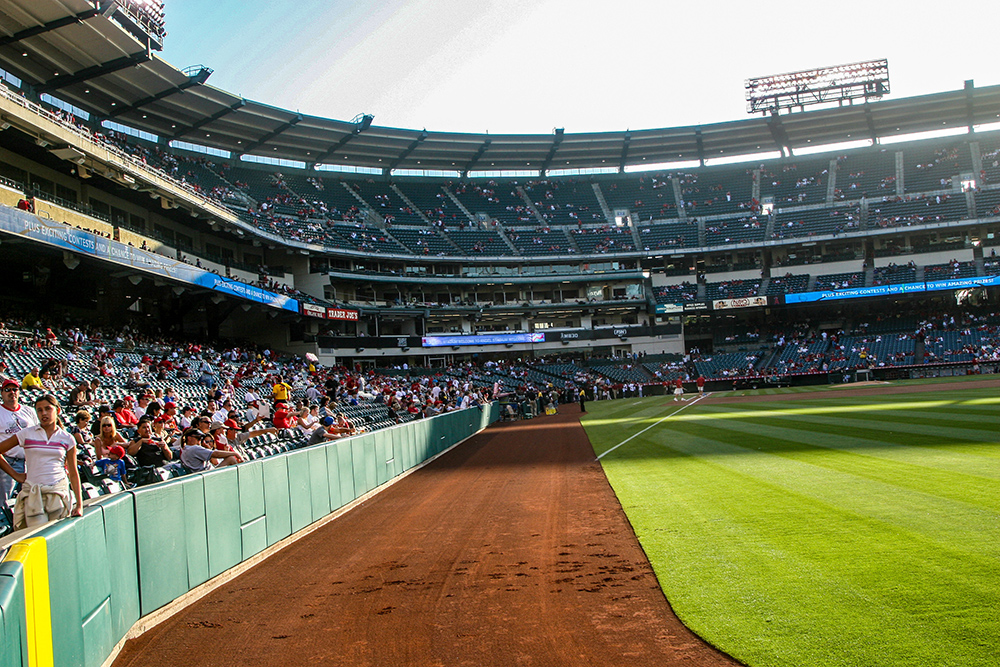 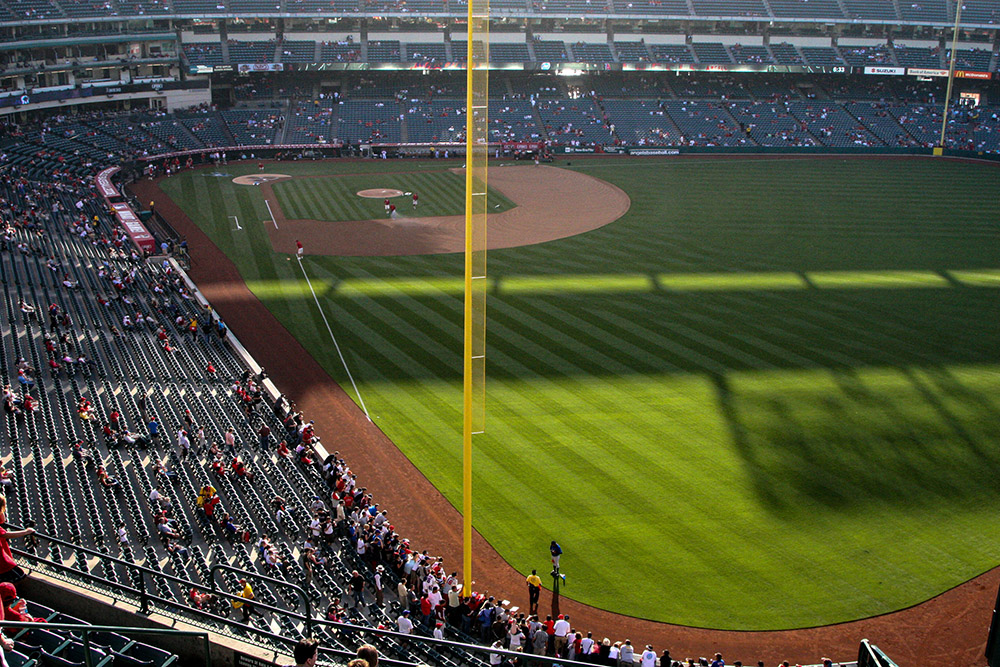 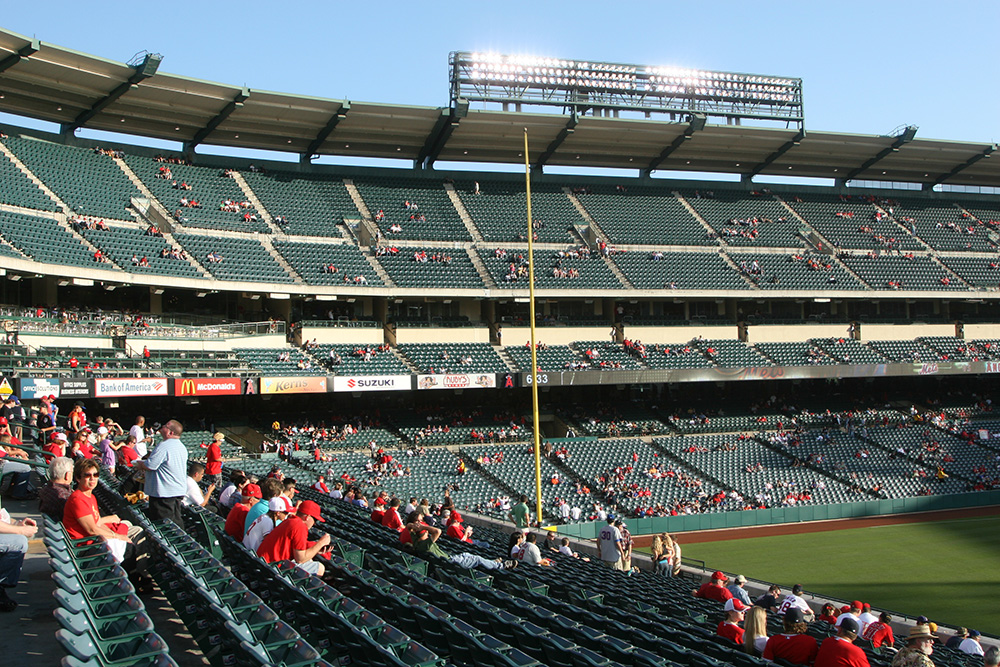 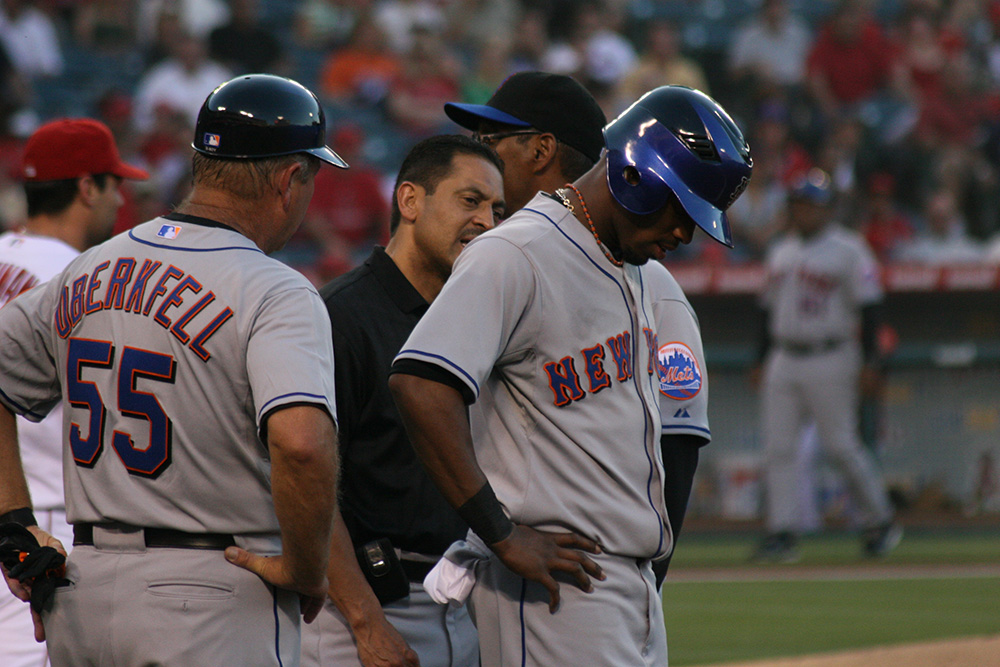 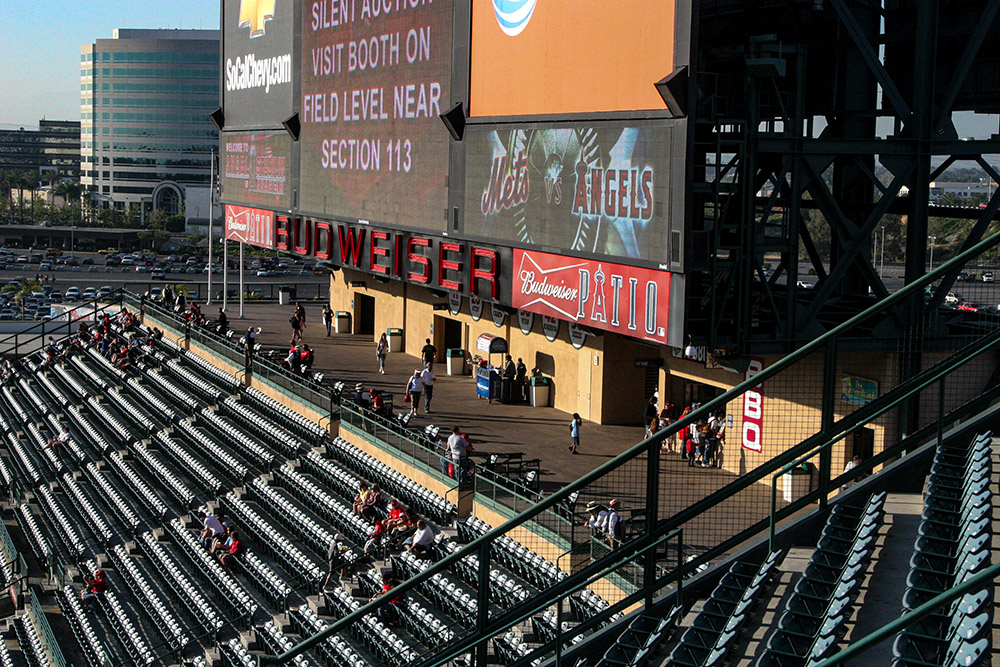 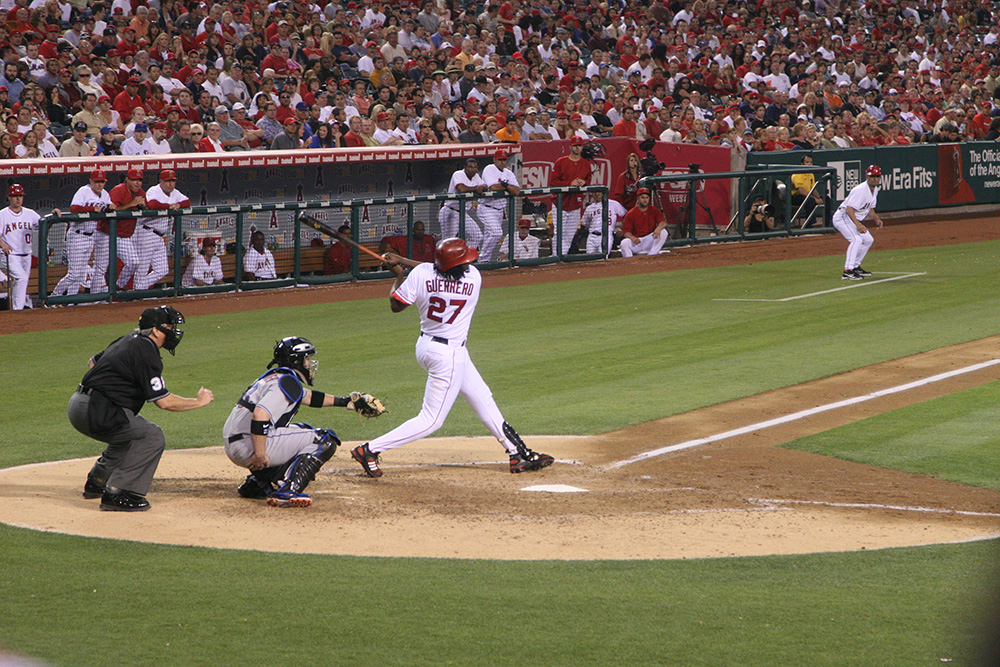 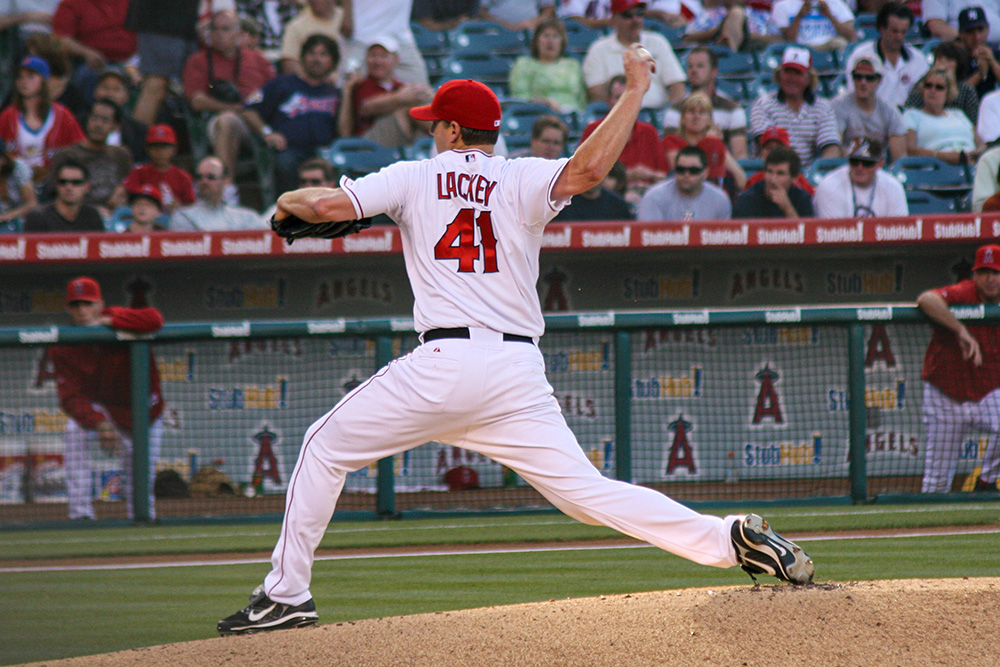 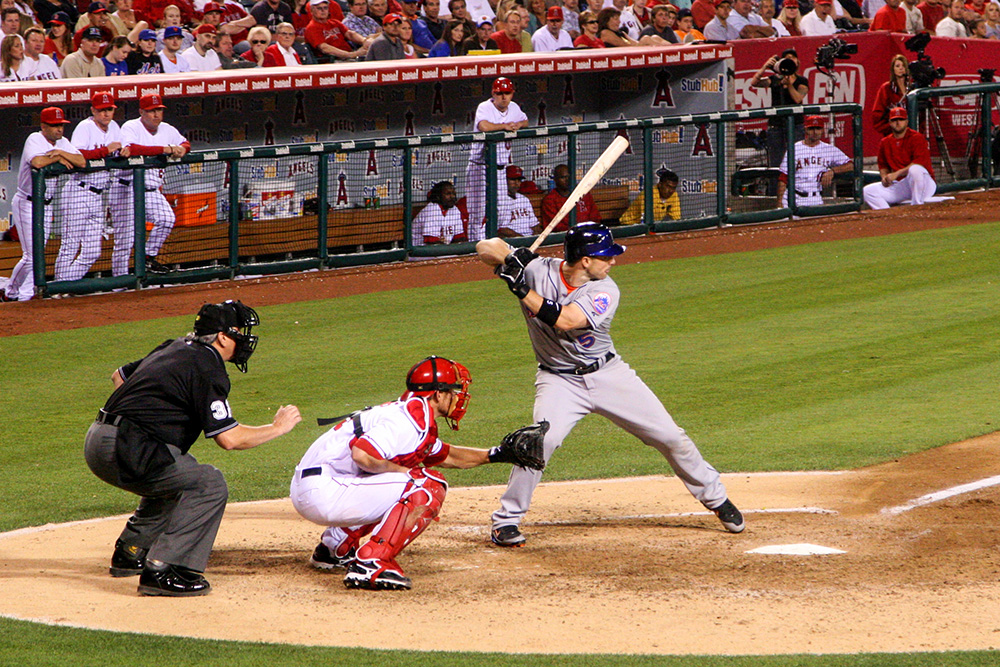 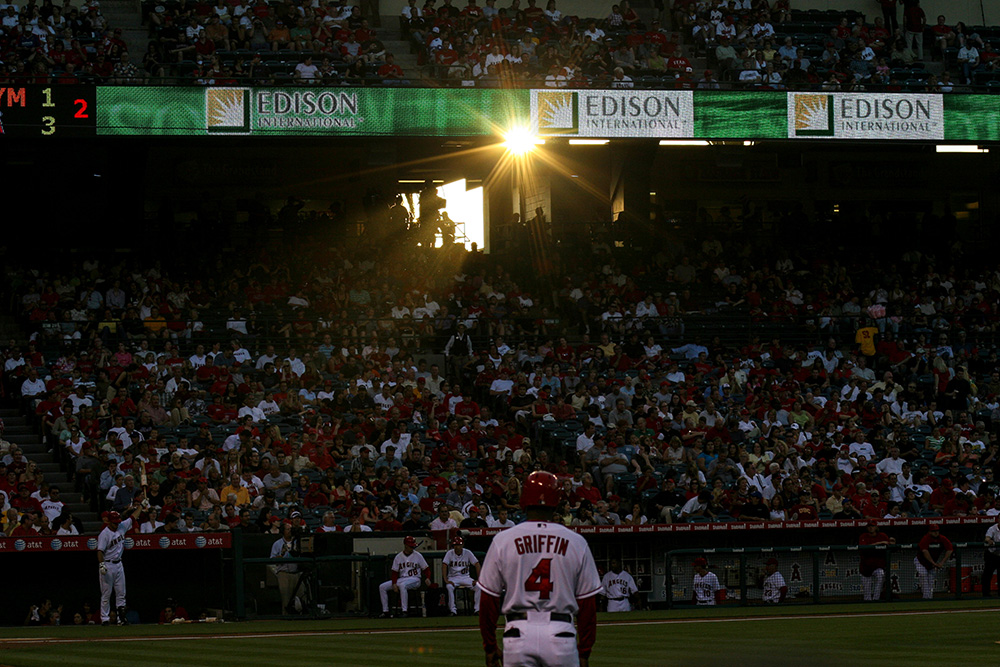 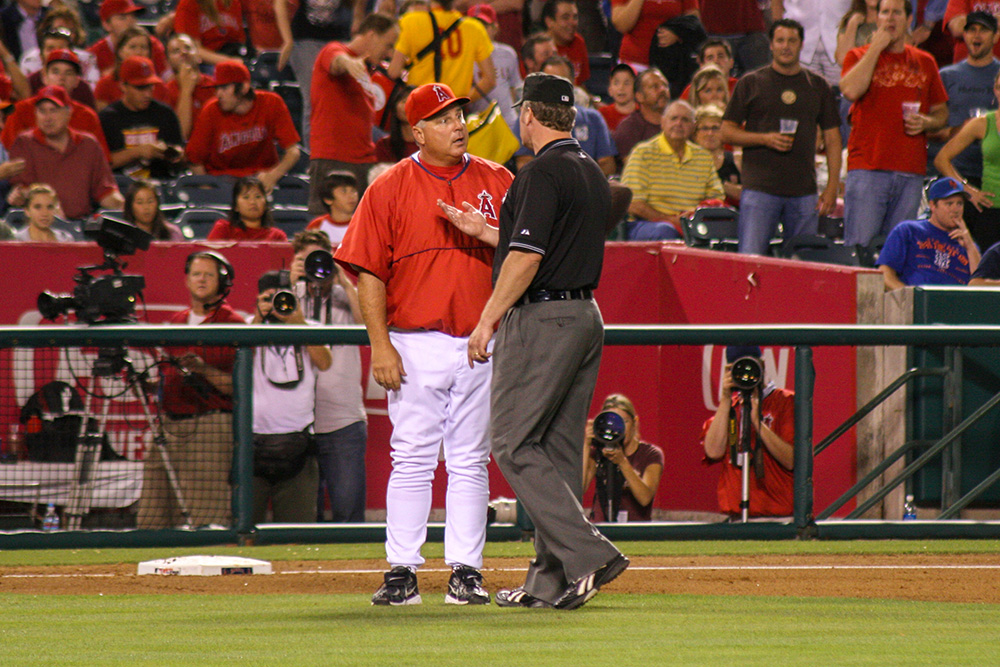 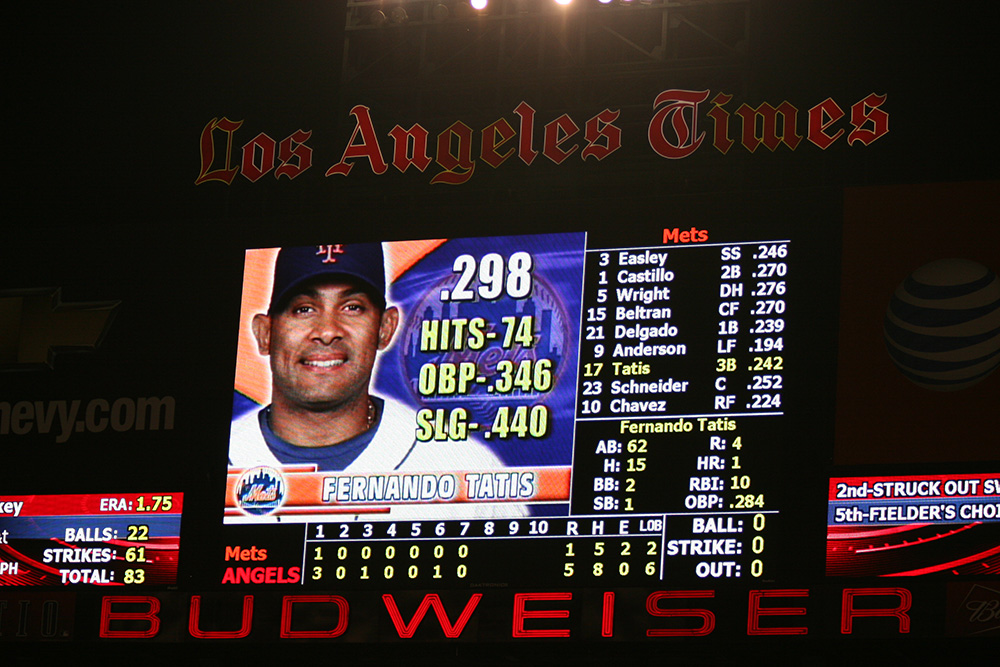 Ballpark: C - Felt like an imitation of Dodger Stadium and other concrete donuts from the 1960's. Stadium renovated for the Rams in the 1980's really reminded me of RFK and Shea with palm trees. The Big “A” is now in the parking lot along the highway. Green seats are great with fans dressed in red. A waterfall and rocks in the outfield. That's baseball to me!

Fans & Atmosphere: D - Dodger fans only in red, no fans in their seats at the start or at the end of the game, need to beat traffic. Some of the fans are not there for the game, too busy on cell phones and gambling. Lots of Big A’s. Some die hard fans who stopped after the game to say hello and chat.

Food: C - Tried their version of a Dodger dog. It's a hot dog! Looked around for something unique and no signature food was available. Angel hair pasta maybe?

Mascot: D - Disney left the park with it’s characters years ago. They still show the rally monkey video whose time has come and gone. No mascots stuffed animals to bring home.

Team Tradition: D - Looked for a Hall of Fame or something to honor teams history. Wanted to see some Bo Belinsky, Dean Chance and Clyde Wright stuff. The exterior of the park is decorated with full scale banners of stars John Lackey, Torii Hunter, Chone Figgins and Vladimir Guerrero. Statue outside of Gene Audrey and a large Angels helmet.

Location: C – I stayed in Los Angeles and drove there for a few games. Google maps said less than an hour drive...it lied. Bad idea on my part was that traffic was a horror show. Met a friend there who lived in Anaheim and they were late for the game. Have no idea what there is to do in Anaheim? No bars or restaurants nearby.