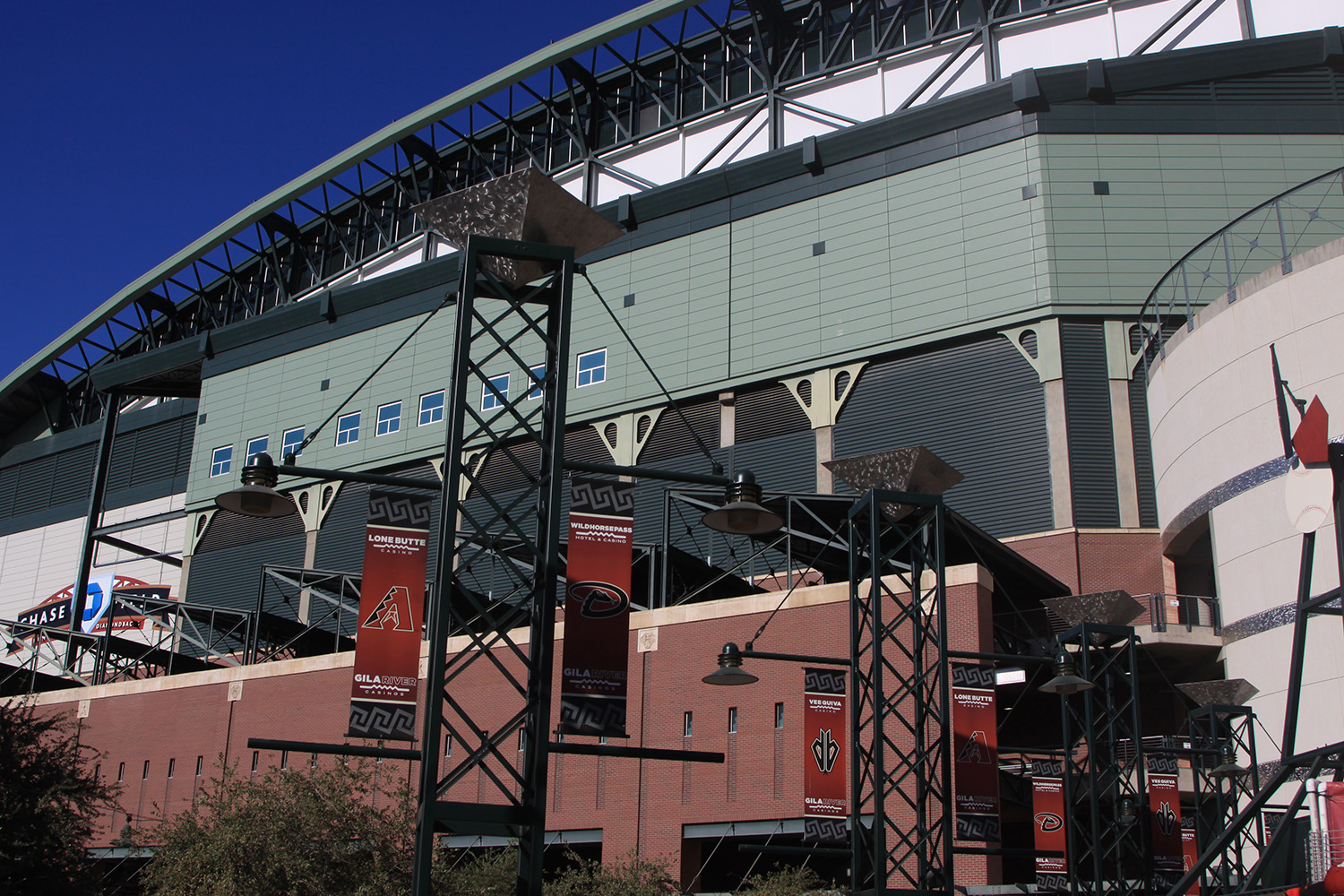 Chase Field, located in downtown Phoenix, has been home of the Arizona Diamondbacks since the team's first game in 1998. Originally called Bank One Ballpark, the name change was announced on September 23, 2005 after Bank One merged with JP Morgan Chase & Co. (Photo: Gordon Donovan)

Chase Field (formerly Bank One Ballpark) is the second stadium I have visited with a retractable room. Milwaukee was the first; while I was there the Brewers had the roof opened a sunny 80 degree day. I am not a big fan of retractable roof ballparks, but it's necessary in Phoenix and some other cities.

Chase Field had the roof opened when I arrived for a tour at 11:30 in the morning. The temperature in Phoenix that day reached 115 degrees, so a roof is necessary in the Arizona summer.

After I picked up my tickets, I had a few minutes before the tour so I wandered into the Diamondbacks team store. I was greeted by two enthusiastic employees who were there to help me. I purchased a few items and was impressed by the friendly staff.

The tour went around the ballpark, to the press box, a luxury box and Diamondbacks' dugout. Luckily, this tour did allow us on the field and some other areas that some other tours don't allow.

The tour leader was rather bland and pointed to lots of places like doors we could enter. In other tours, the leaders would take us behind those doors, playing the role of baseball fan and motivational speaker.

The three trademarks of Chase Field are of course the retractable roof, the dirt pathway from home plate and the swimming pool in right field.I returned to the stadium an hour before game time and saw the ballpark was near empty. The only crowds were behind the visitors' dugout seeking souvenirs.

The roof was closed and it was darker inside the park and much cooler than the 100-degree temperature outside.

I asked an usher if it was okay to walk around and take photos. He said yes and to enjoy - another pleasant staff member. As I walked around the park, I ran into Met fans who were transplanted New Yorkers. Many missed the east coast sports scene; people in Phoenix were not as passionate about pro sports. The field level concourse was easy to move around and filled with stores and concession stands.

I grabbed a hamburger at FAT BURGER for $6.00. It was very good. I then headed towards my seats and decided to get a hot dog and soda. At the concession stand, everything stopped when the National Anthem was performed. No one moved everywhere I turned. This wasn't New York, Philadelphia or many other ballparks where people will wander around during the anthem. I found my seat and by visitors' dugout, 10 rows back - really great seats.

The rows in front of me were empty as were all the seats to my left. This meant I could move around and get clear shots with my camera. A few people behind me who were Mets fans who now live in the Phoenix area now. Then a few Diamondback fans arrived at game time to my right. I heard a lot of frustration from fans of both teams. The Mets were not going to spend money or make any moves. The Diamondbacks were young and talented, but underachieving after making the playoffs just two years earlier. They were looking to dump salaries.

There was one fan from another New York team who the Diamondbacks defeated in the 2001 World Series. I always wonder why some people come to games wearing jerseys of teams not playing at that particular venue that game. This fan screamed at several players about poor play and contracts. People laughed at the fan when he was corrected about some of his incorrect facts. Later on, someone noticed that he was quiet and perhaps left. Another fan said he was actually asked to leave by security for his behavior.

The game went back and forth and in the middle innings, the bullpen doors opened in right field and four large "foam heads" emerged with Diamondbacks hats. The heads resembled Randy Johnson, Luis Gonzalez, Matt Williams and Mark Grace. Recently the Diamondbacks started a legends race of players who have made a significant contribution to the organization on the field. The legends race is similar to the Presidents Race at Nationals Park in Washington, D.C., and the Sausage Race at Miller Park in Milwaukee.

During the 7th inning stretch, Baxter (the team mascot) tosses team shirts on top of the dugout with the Rally-backs. Baxter rounds around the park posing with fans and taunts the fans of the opposition. While I was there, he hit a fan with a whip cream pie and ripped up a sign held up by a fan.

I attended two games there on the field level by the visitor's dugout. Prices were expensive for a non-contender - over $100. Other teams that did not believe they would contend this season charged half of what I paid for the same seats. I should have bought cheaper seats and moved down.

The Diamondbacks defeated the Mets in both games. The second game went 14 innings with most of the ballpark empty when it ended at 11:30 to complete the three game sweep. The ballpark is great, food was good, and the staff was the friendliest I ever encountered. I wore a neutral shirt the first game and a Mets shirt the second and was treated the same by the staff.

When in Phoenix, take a tour on an off day to see the closed-off areas when the team is home. Check out some of the beautiful golf courses in the area. Then see the Diamondback and their friendly staff in their cool home in downtown Phoenix. 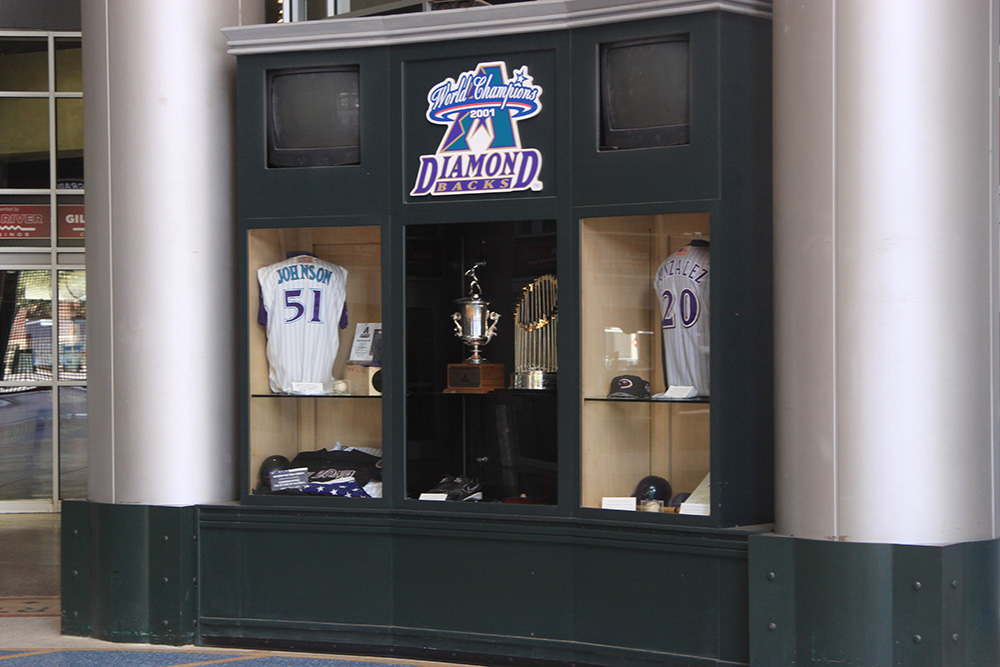 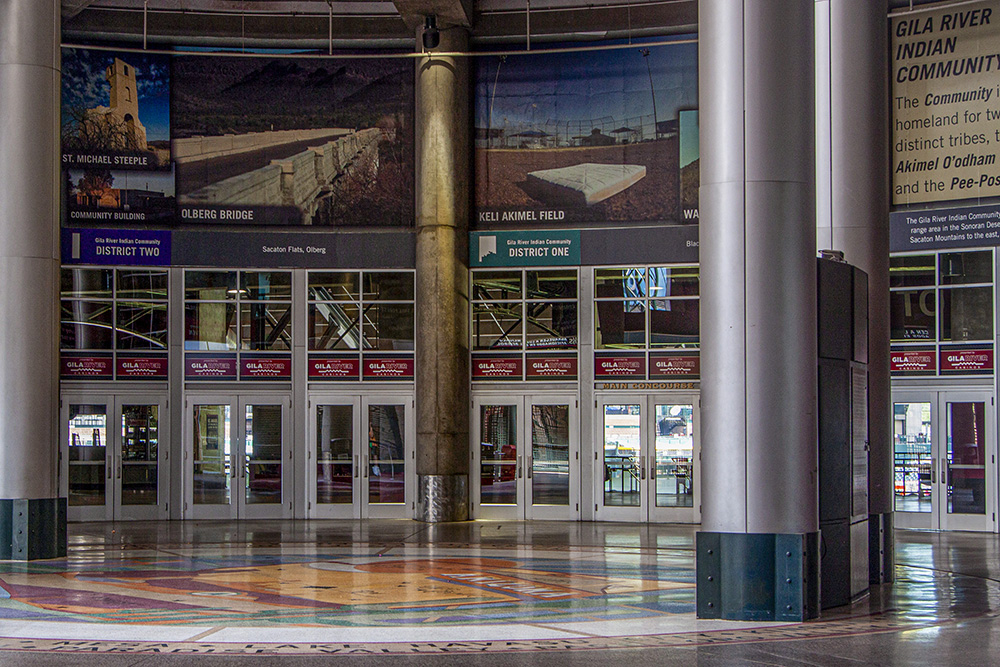 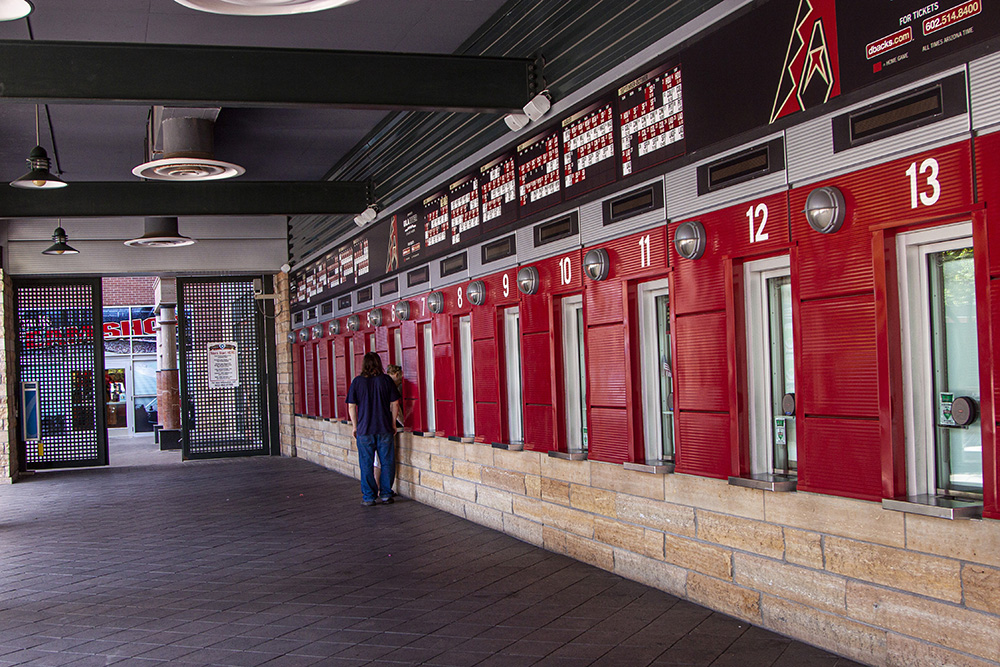 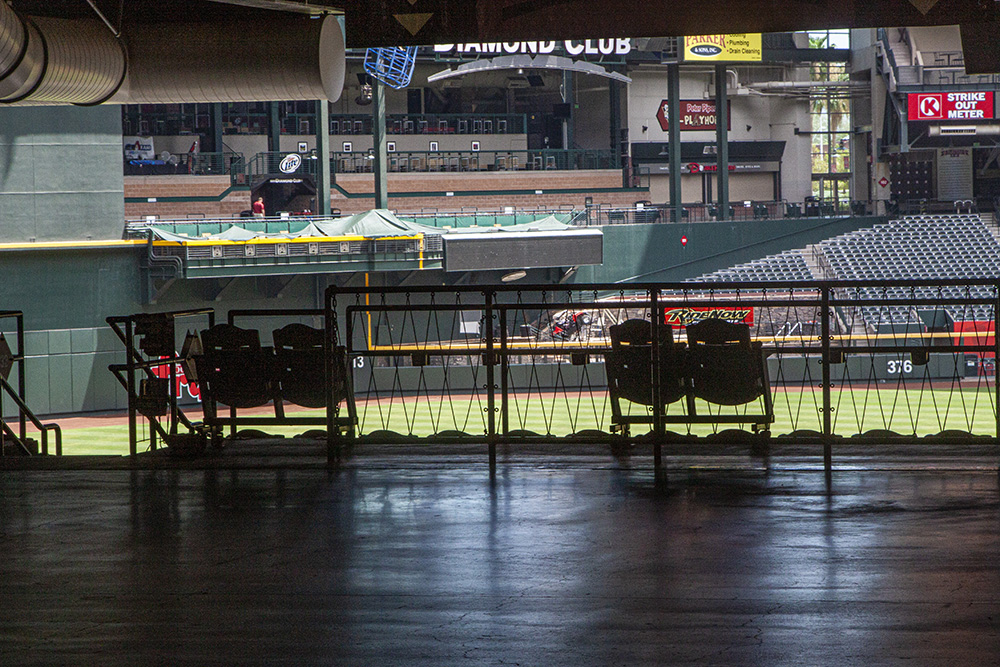 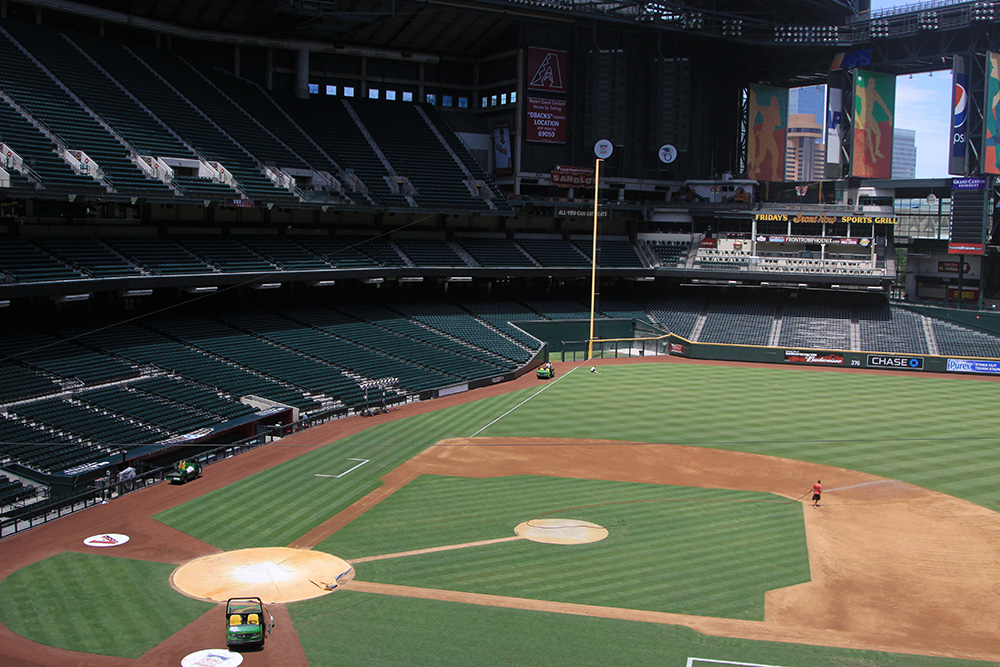 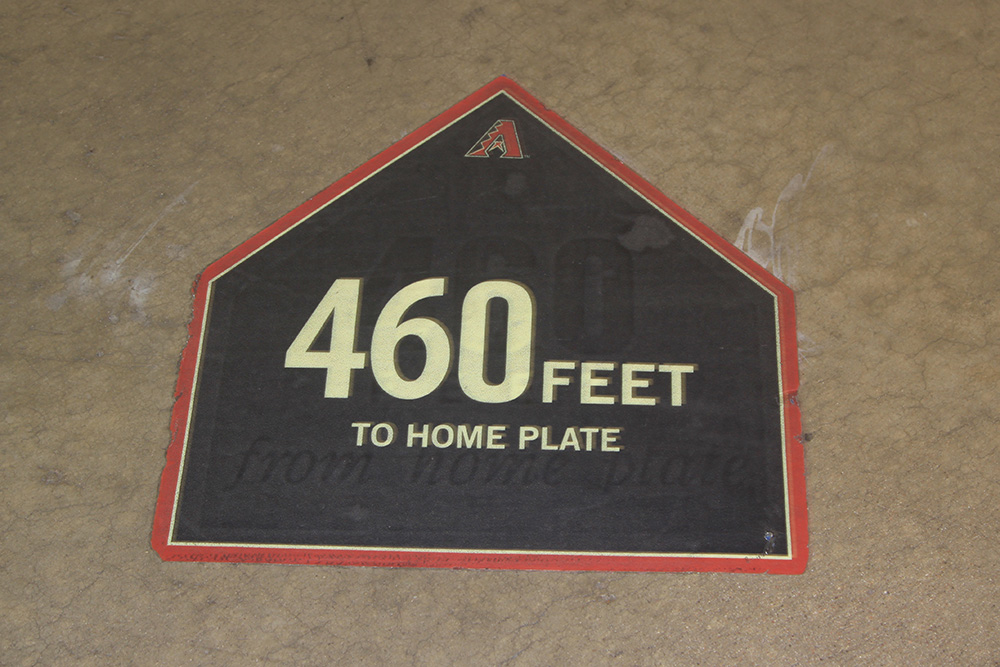 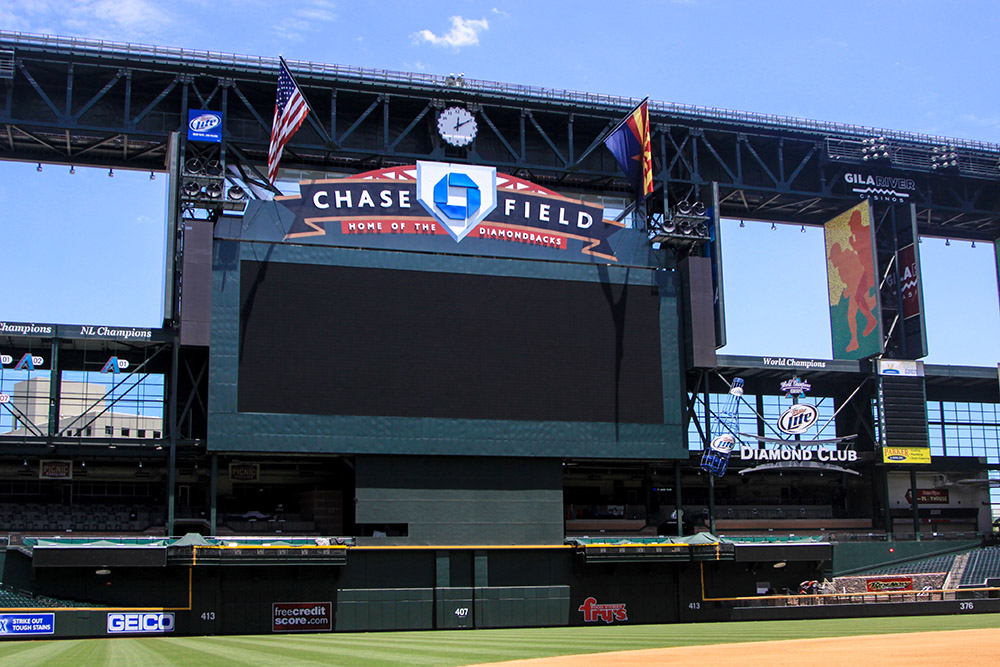 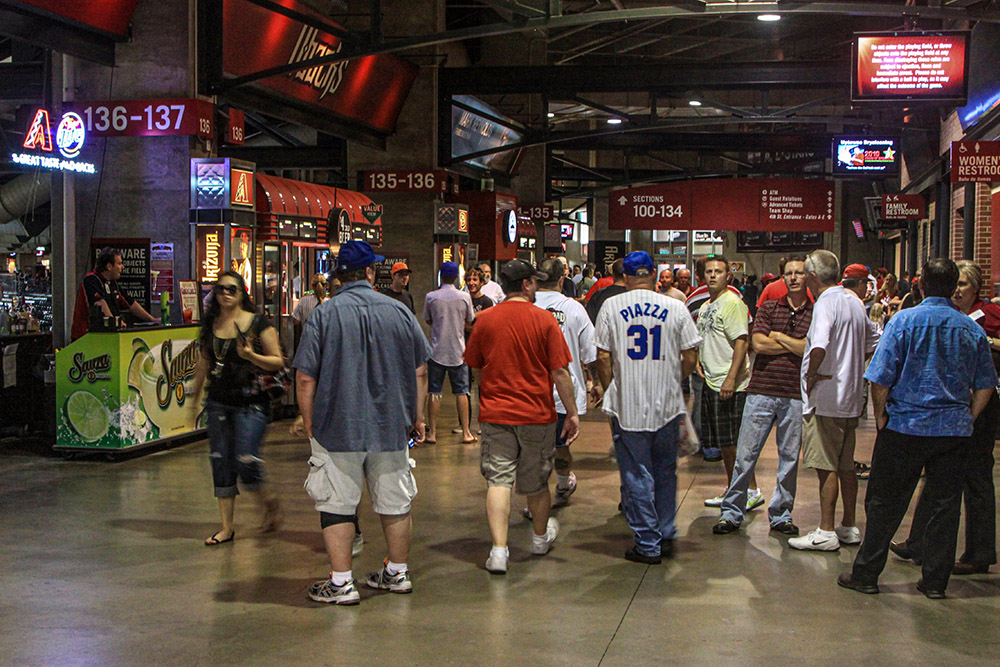 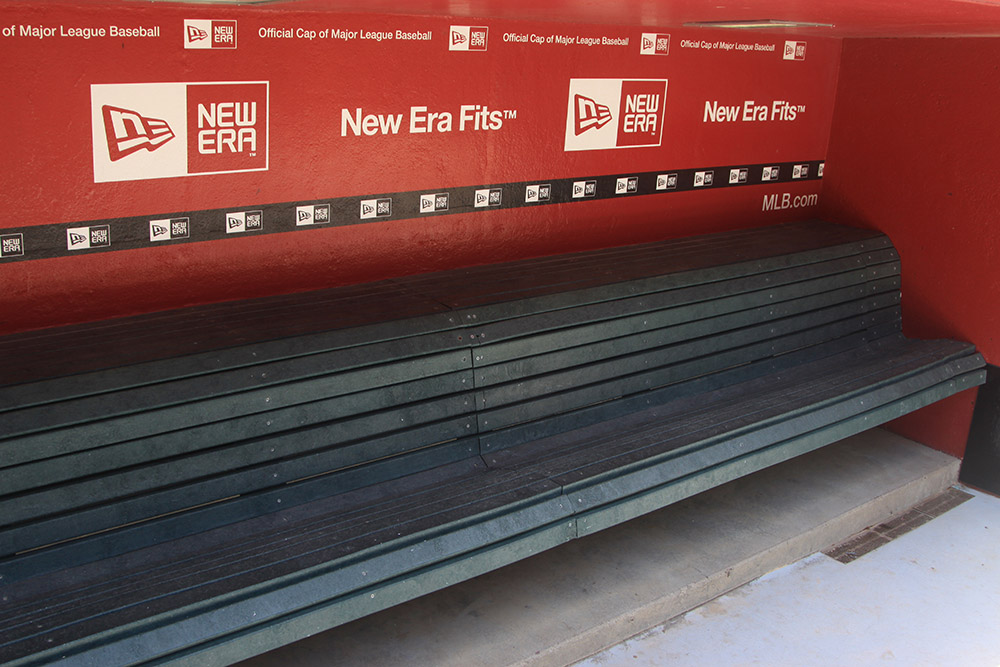 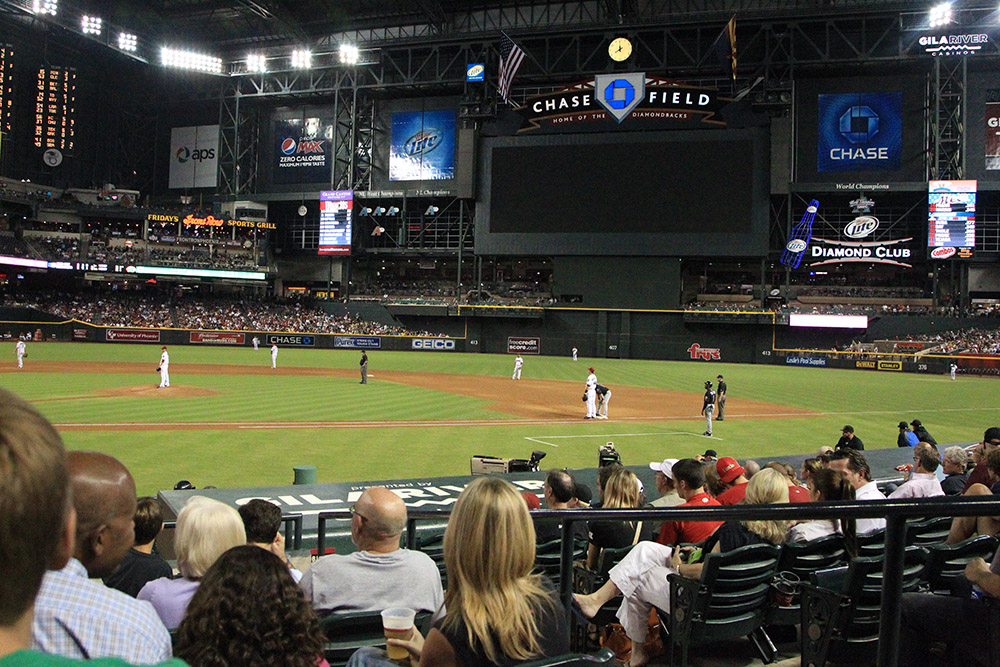 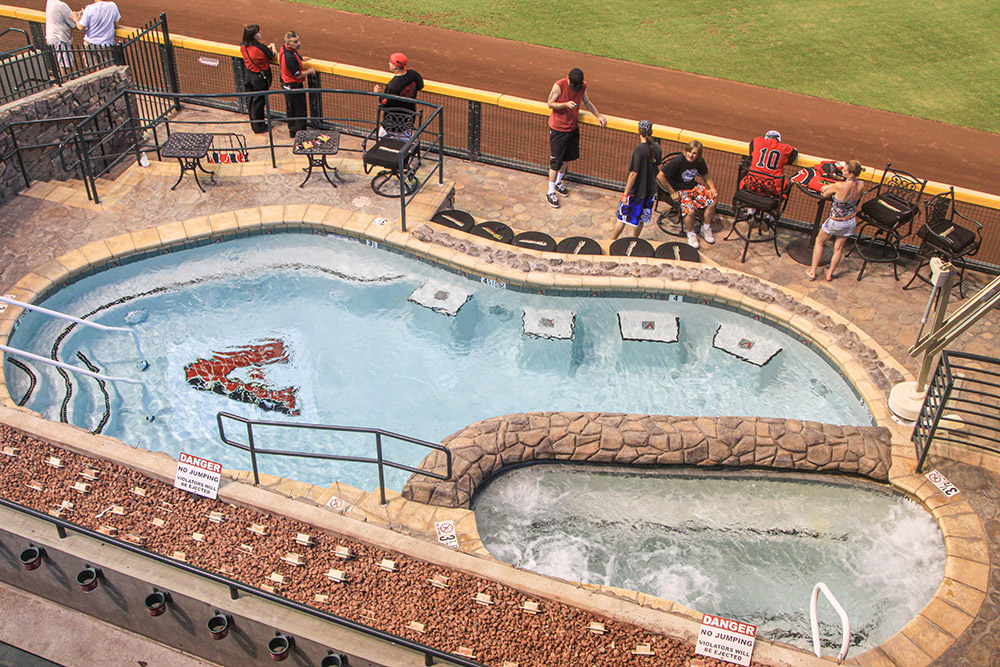 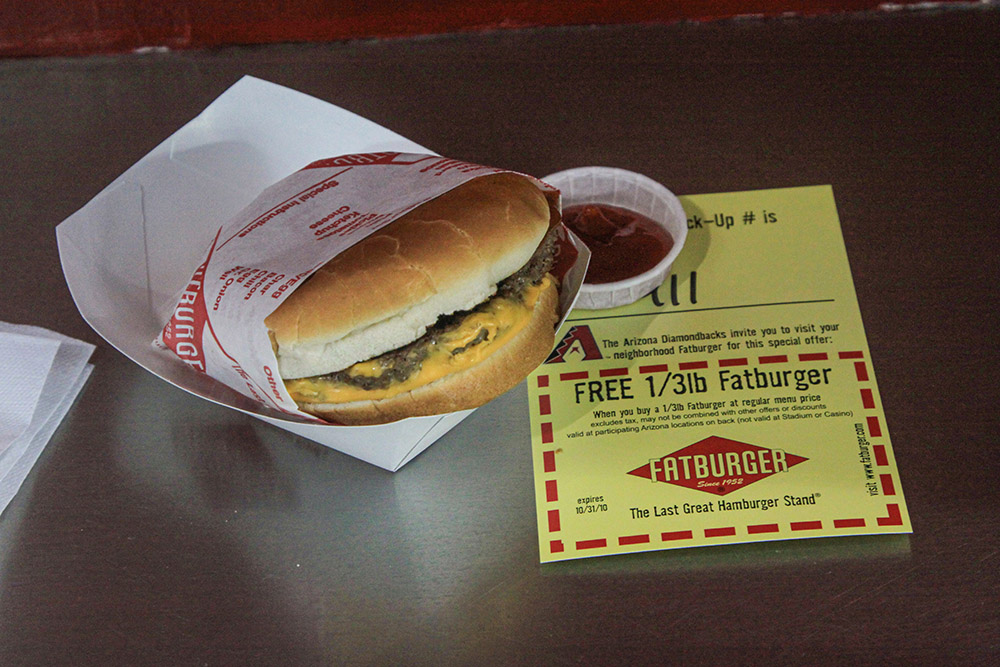 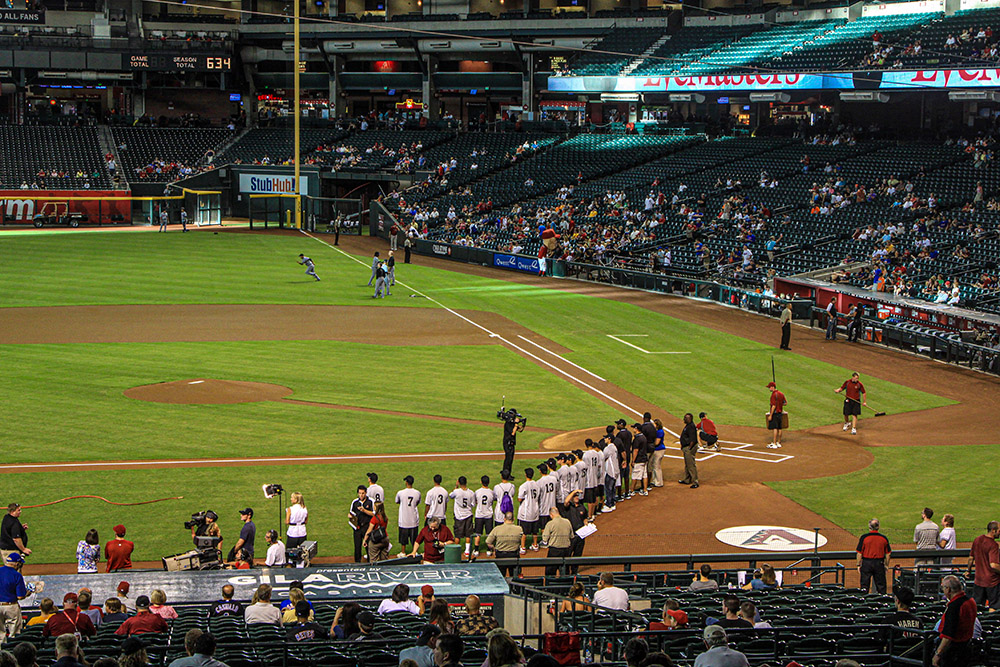 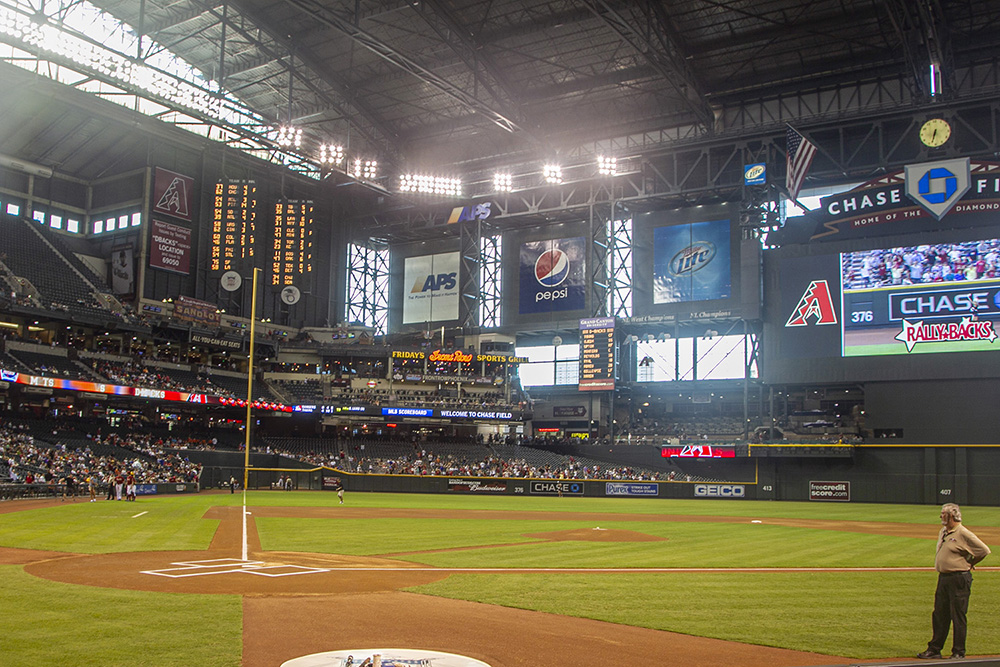 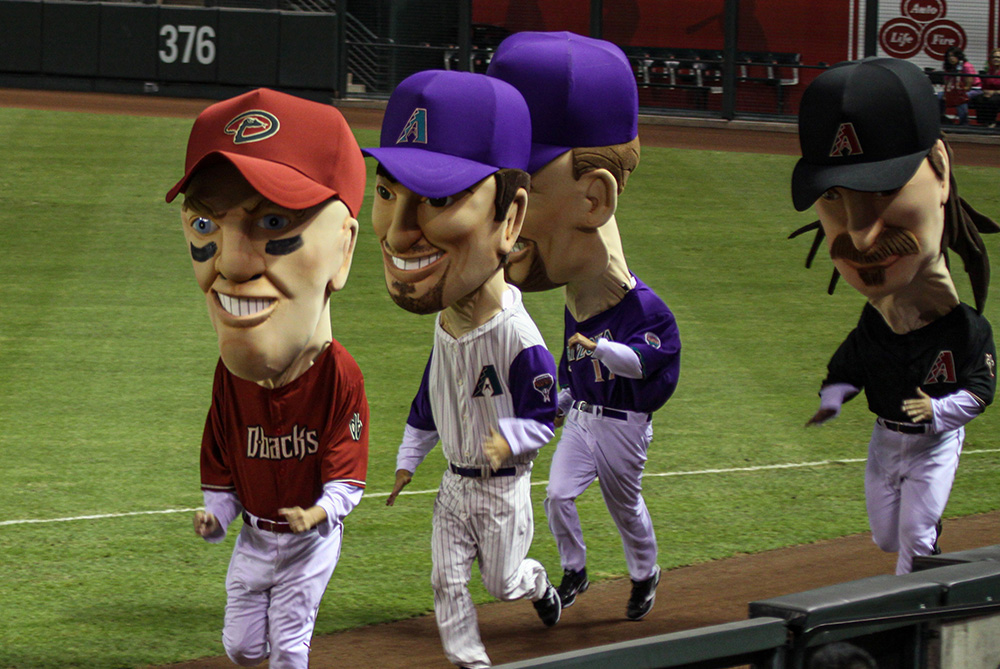 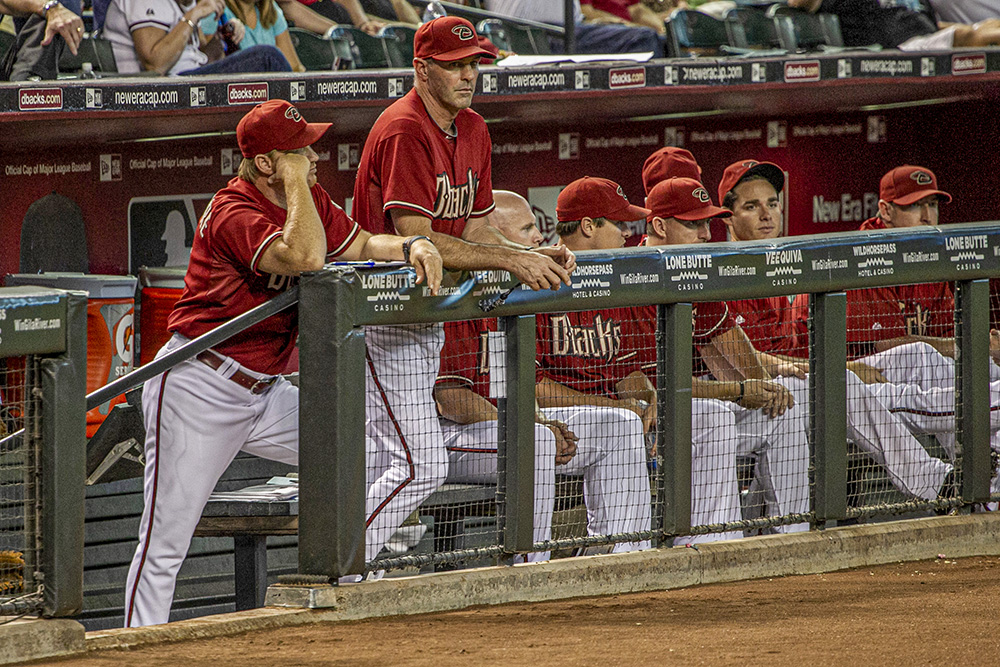 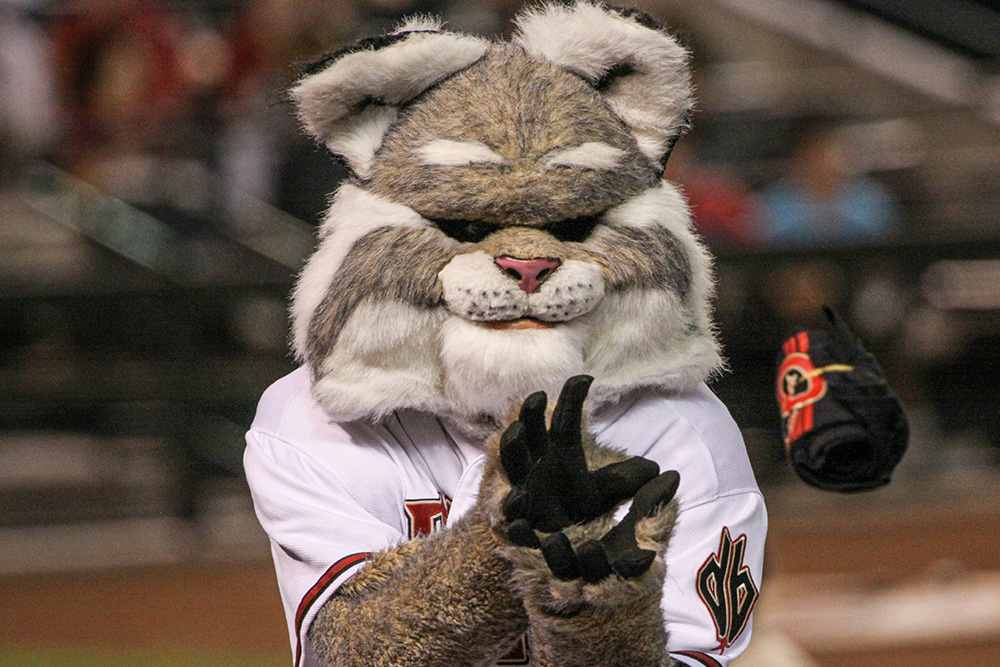 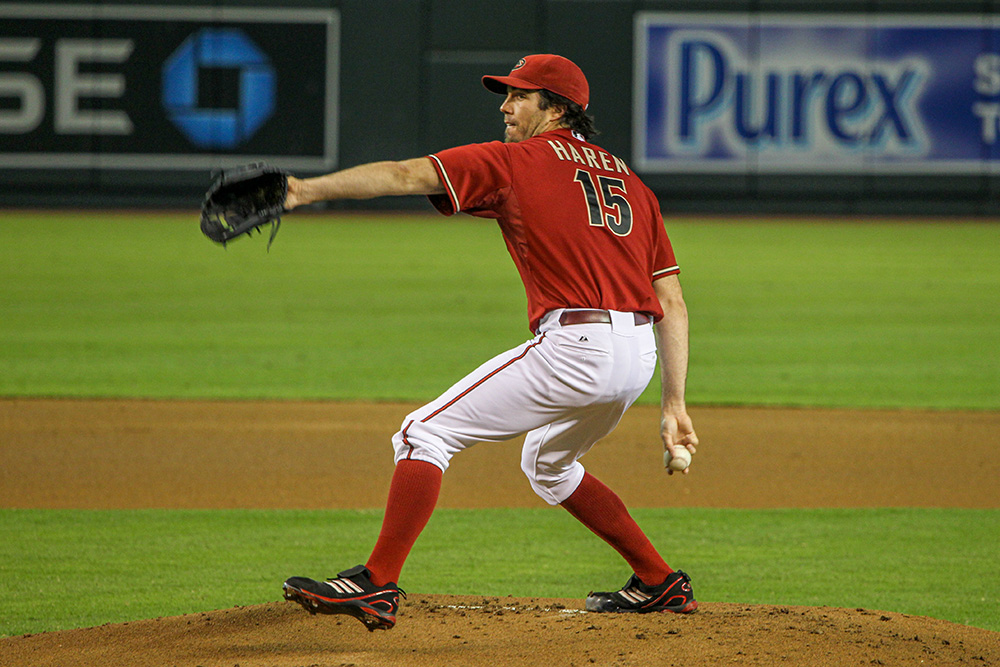 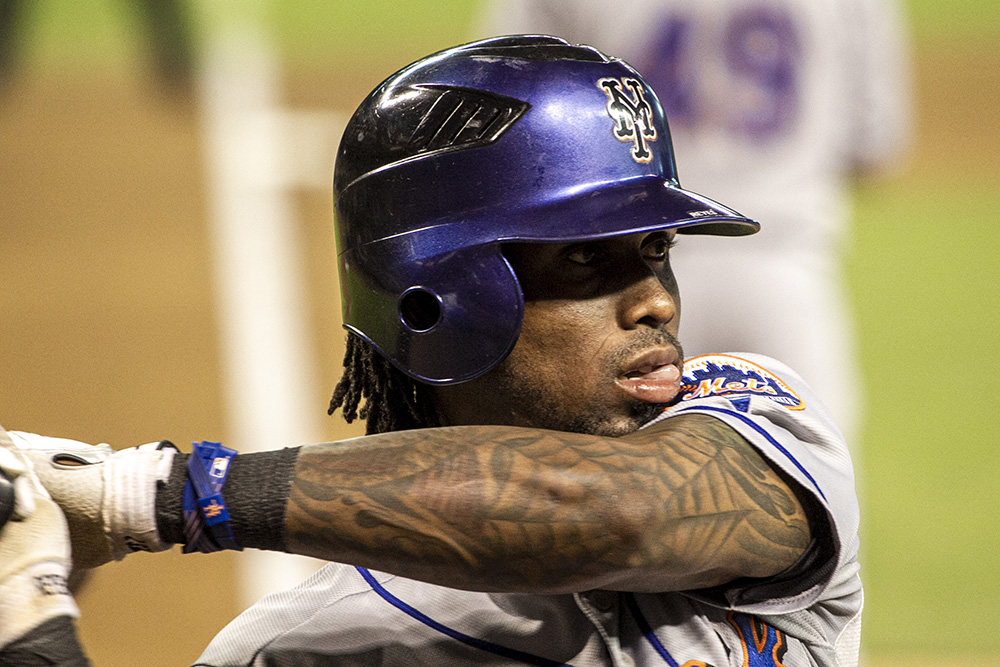 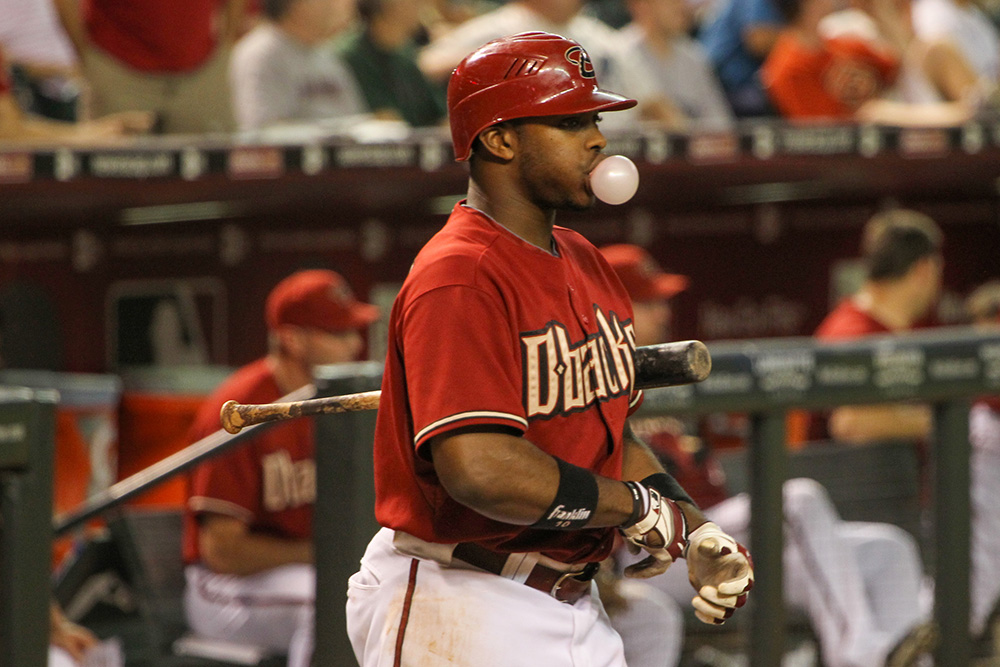 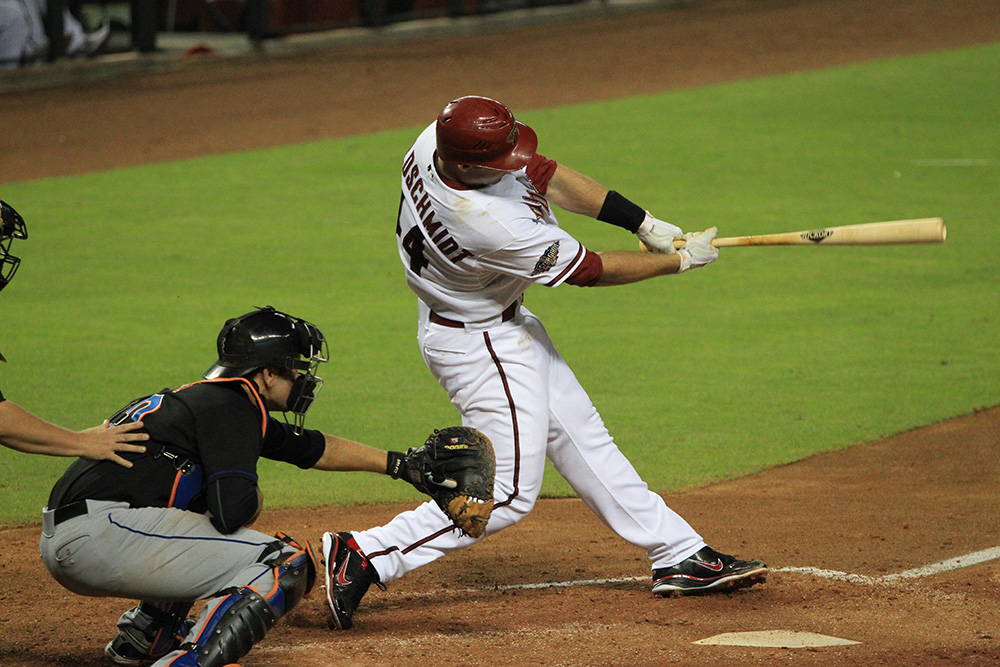 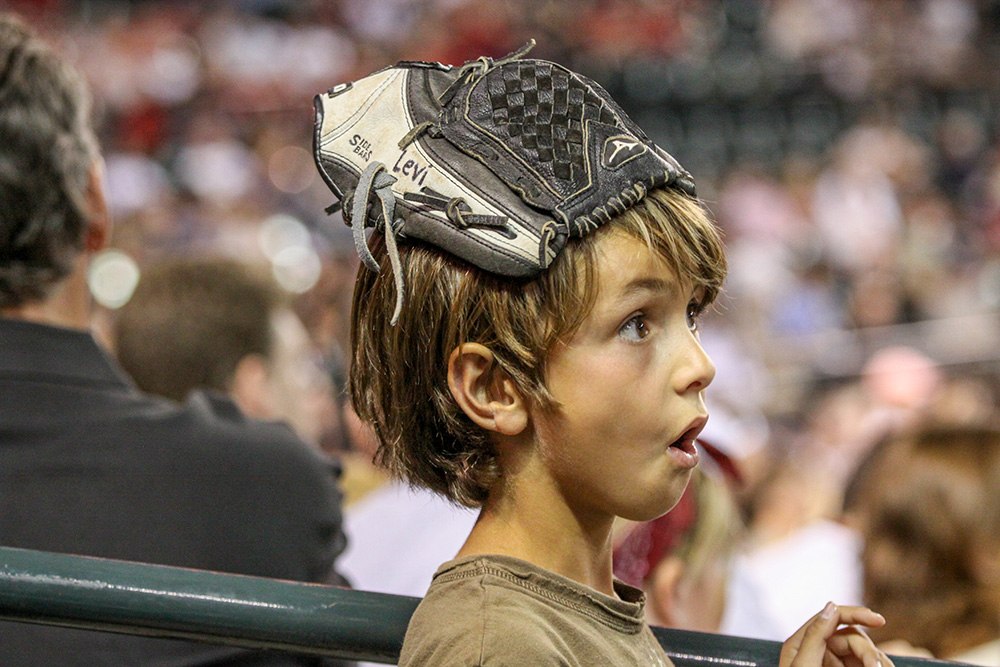 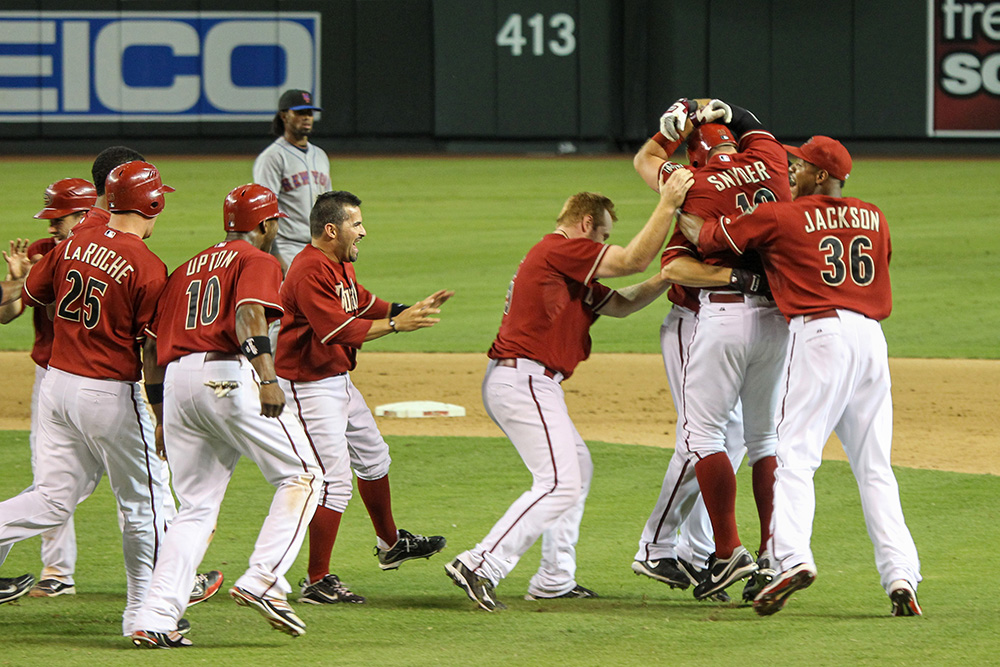 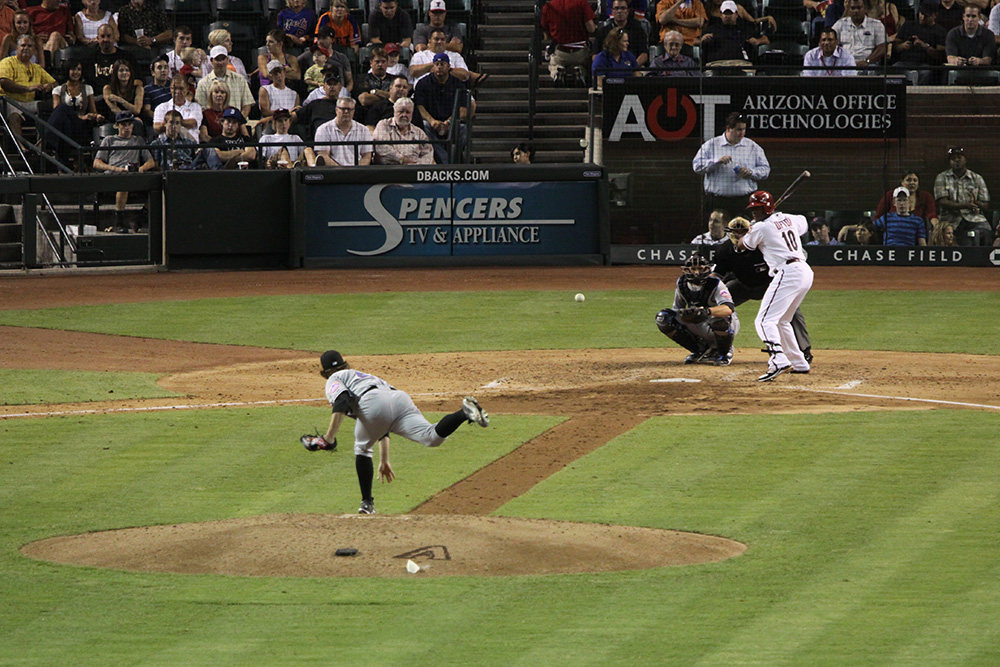 Ballpark: B - The three trademarks of Chase Field are of course the retractable roof, the dirt pathway from home plate and the swimming pool in right field. Beautiful rotunda.

Fans & Atmosphere: C - The fans? More Met fans present and I felt like I was in an airport hanger. During the national anthem the staff in the kitchen of concession stands came out and removed their hats. Everybody stood still in concourses. Never seen this before. Prices were expensive for a non-contender - over $100 by dugout.

Mascot: B - Baxter an obnoxious Bobcat. He hit a fan with a whip cream pie and ripped up a sign held up by a fan. Not fan friendly in my opinion.

Staff: A - Staff was the friendliest I ever encountered. I wore a neutral shirt the first game and a Mets shirt the second and was treated the same by the staff. Went to the fan assistance office and complemented the staff who showered me with gifts.

Team Tradition: C - Not a baseball town, college sports are big. Won the World Series in 2001 and the trophy is in the rotunda. Nice team store with memorabilia.

Location: A - Downtown Phoenix, easy to get to with parking available.