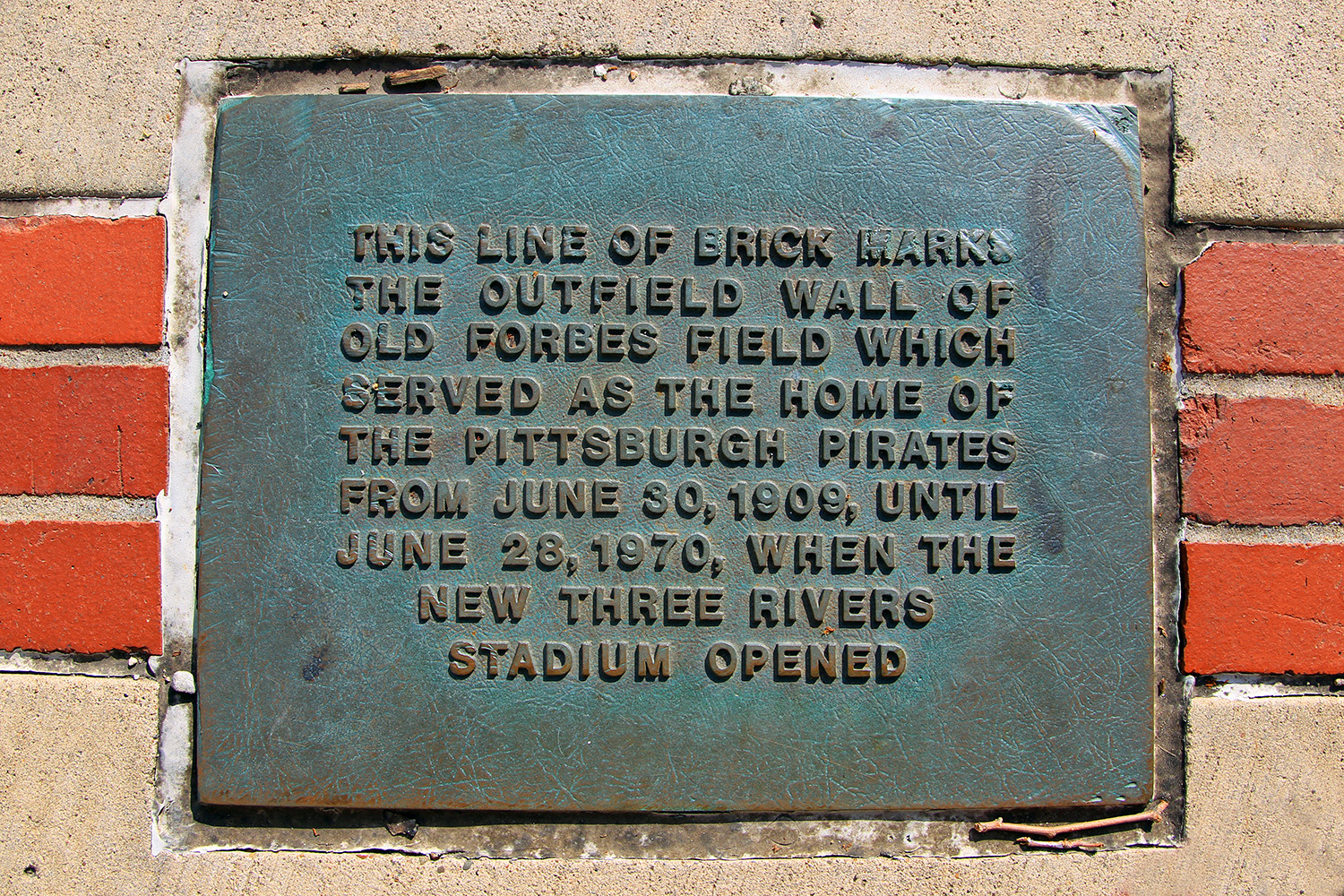 The original location of that wall is outlined by bricks extending from the left-center field wall into the sidewalk. (Photo: Gordon Donovan)

Forbes Field was a baseball park in the Oakland neighborhood of Pittsburgh, Pennsylvania, from 1909 to June 28, 1970. It was the third home of the Pittsburgh Pirates and the first home of the Pittsburgh Steelers.The stadium was named after British general John Forbes, who fought in the French and Indian War, and named the city in 1758.

The US $1 million ($26.3 million today) project was initiated by Pittsburgh Pirates' owner Barney Dreyfuss, with the goal of replacing his franchise's then-current home, Exposition Park. The stadium was made of concrete and steel (one of the first of its kind) in order to increase its lifespan. The Pirates opened Forbes Field on June 30, 1909 against the Chicago Cubs, and would play the final game that was also against the Cubs on June 28, 1970.

The field itself featured a large playing surface, with the batting cage placed in the deepest part of center field during games. Seating was altered multiple times throughout the stadium's life; at times fans were permitted to sit on the grass in the outfield during overflow crowds. The Pirates won three World Series while at Forbes Field.

Though Forbes Field was praised upon its opening, it began to show its age after 60 years of use. The park was the second oldest baseball field in the league at the time – only Shibe Park in Philadelphia was older. The location of the park, which was initially criticized for not being developed, grew into a "bustling business district" which led to a lack of parking space. One sportswriter wrote that The House of Thrills had become "as joyless as a prison exercise yard".

Following a plan to expand their adjacent campus, the University of Pittsburgh purchased Forbes Field in 1958, with an agreement to lease the stadium to the Pirates until a replacement could be built. A proposal for a new sports stadium in Pittsburgh was first made in 1948, but plans did not attract much attention until the late 1950s.

Construction began on Three Rivers Stadium on April 25, 1968. The Pittsburgh Pirates and the Chicago Cubs played a double-header on June 28, 1970. Pittsburgh won the first game 3–2. In the later game Al Oliver hit the last home run in the park, and Matty Alou drove in two runs as the Pirates closed the 62-year-old stadium with a 4–1 victory.

The 40,918 spectators in attendance stood and cheered as Dave Giusti retired Willie Smith for the final out at the stadium. Pirates Hall of Famer Roberto Clemente played 15 seasons at Forbes Field. He was emotional during the last game saying, "I spent half my life there." After the game, home plate was dug up and taken by helicopter to Three Rivers Stadium to be installed in the artificial turf.

Some remnants of the ballpark still stand, surrounded by the campus of the University of Pittsburgh. Fans gather on the site annually on the anniversary of Bill Mazeroski's World Series winning home run, in what author Jim O'Brien writes is "one of the most unique expressions of a love of the game to be found in a major league city". 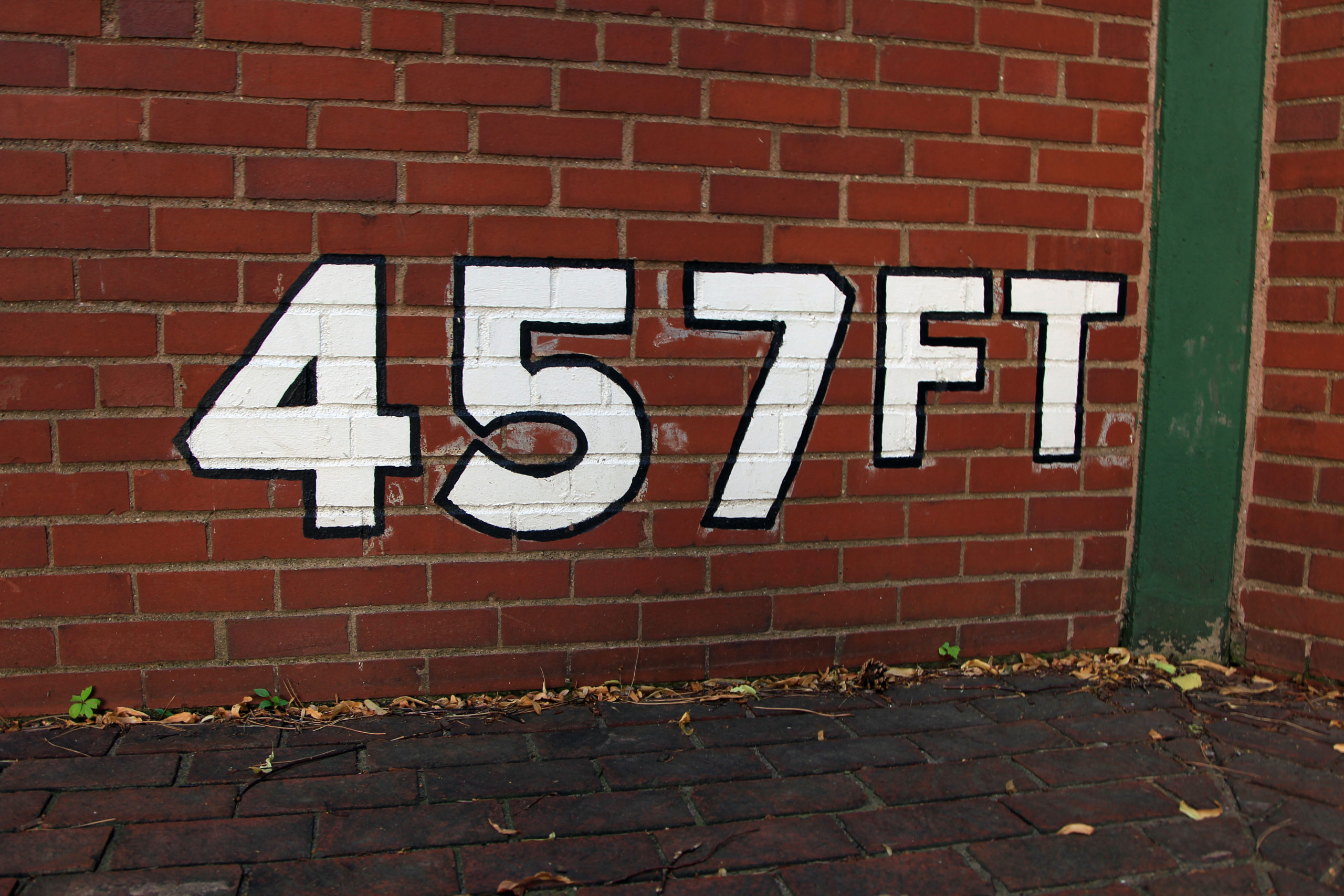 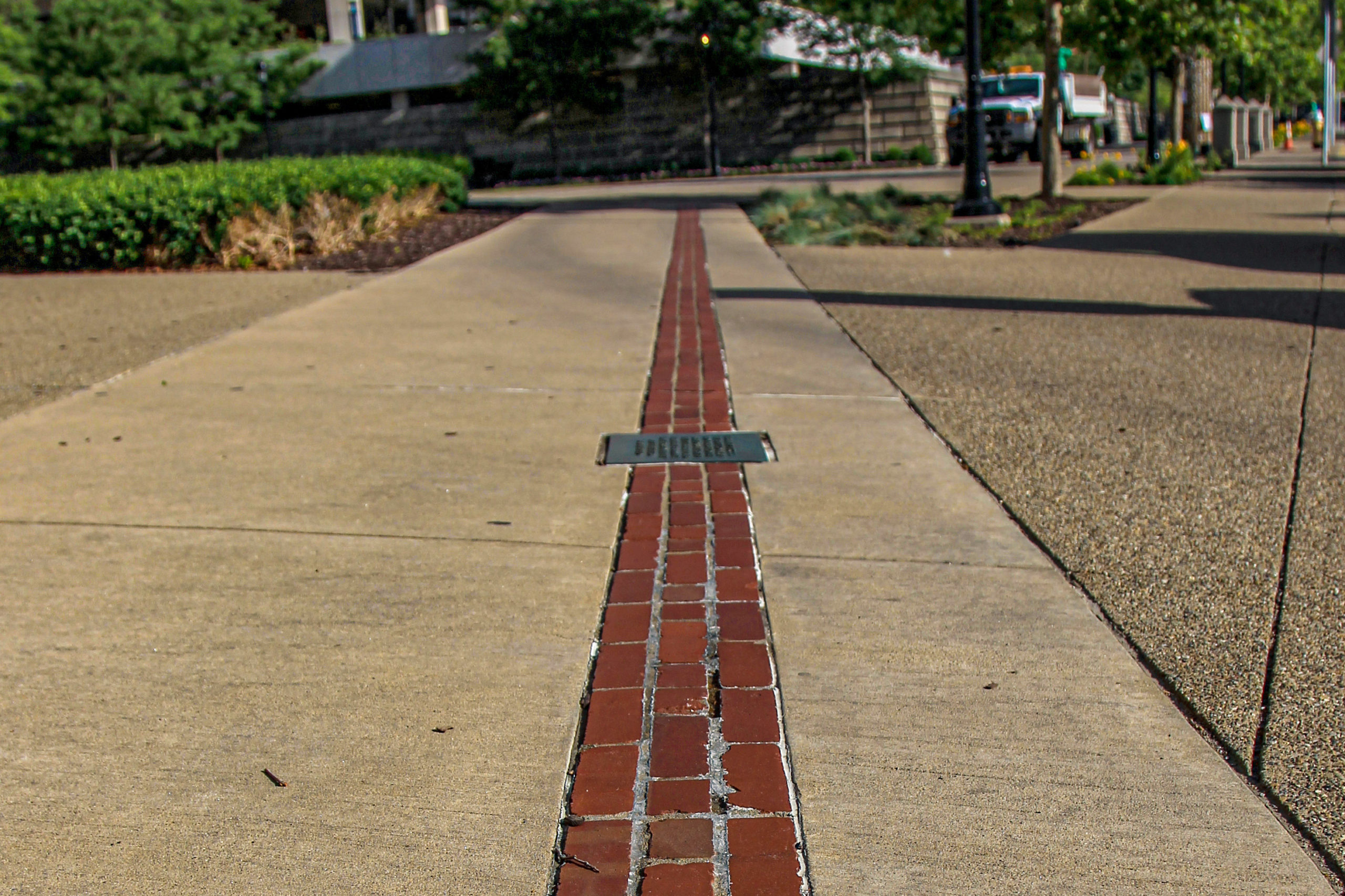 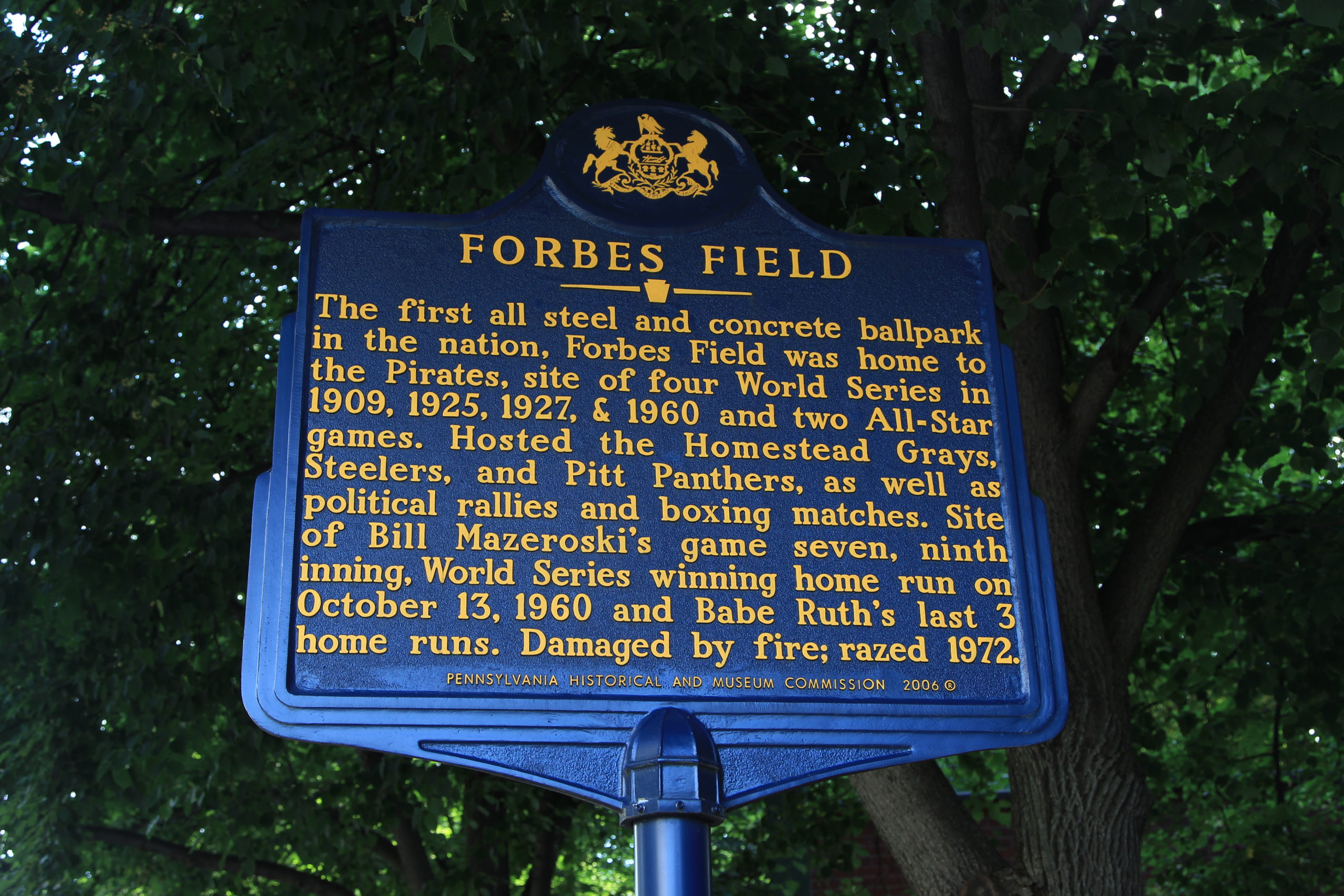 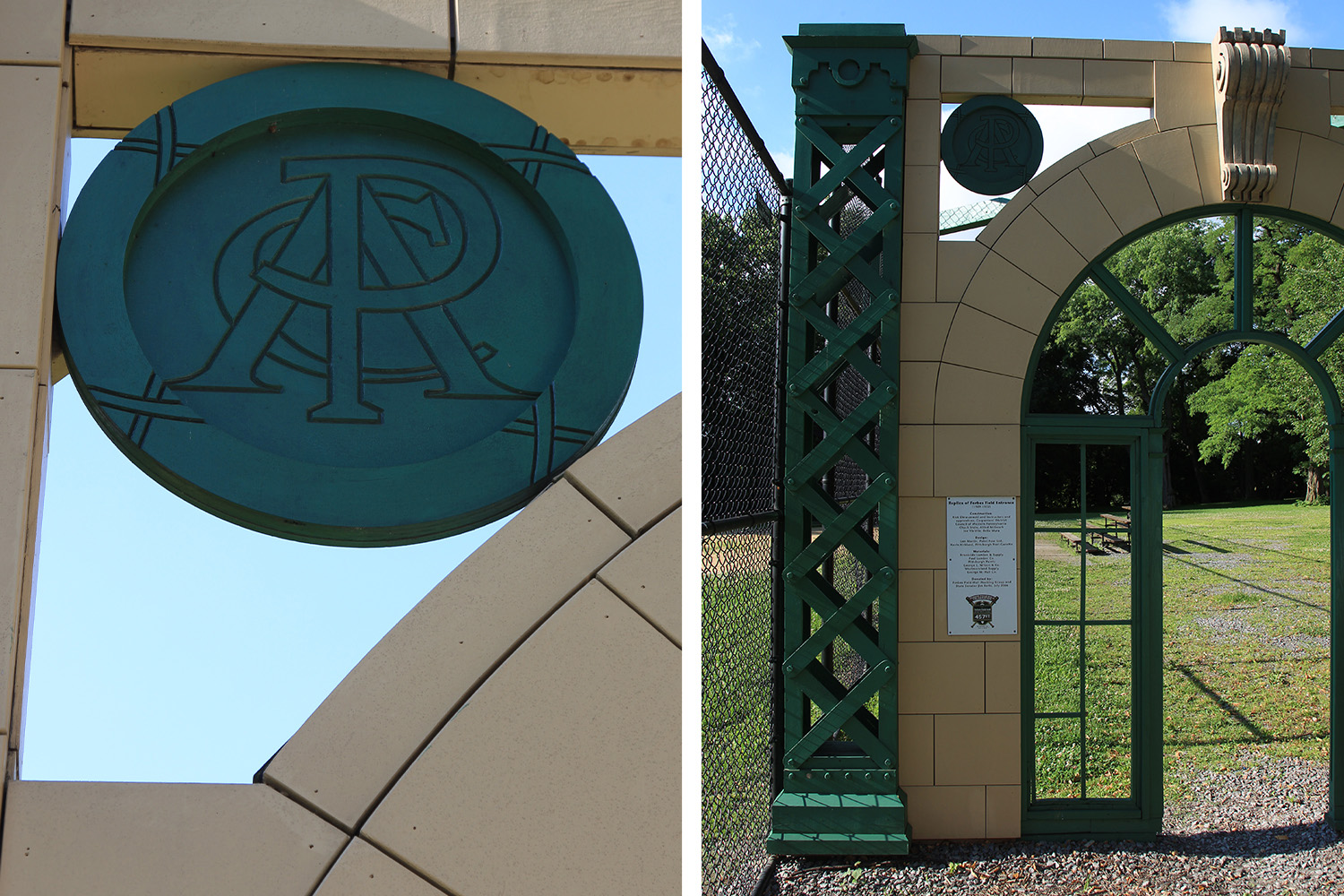 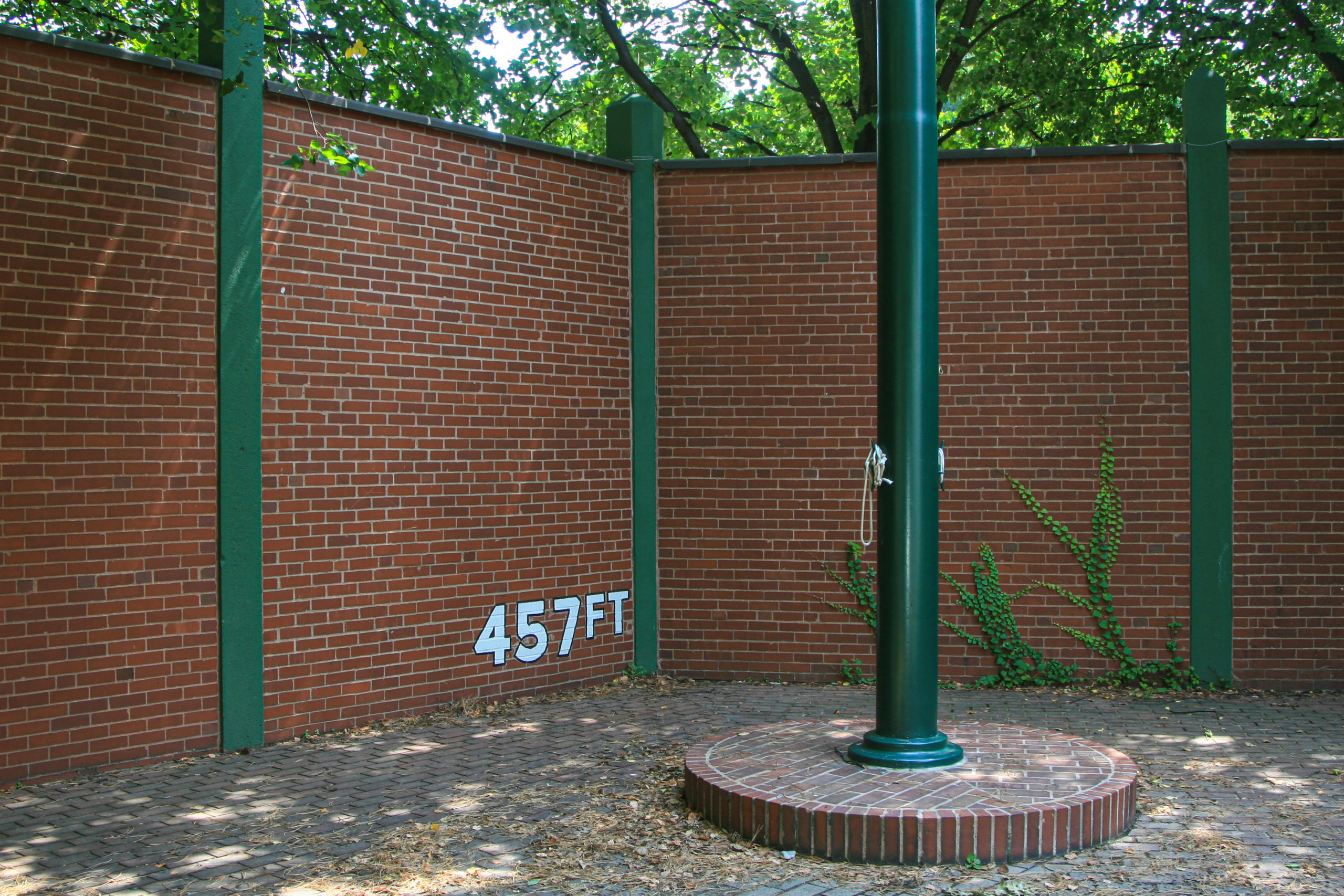 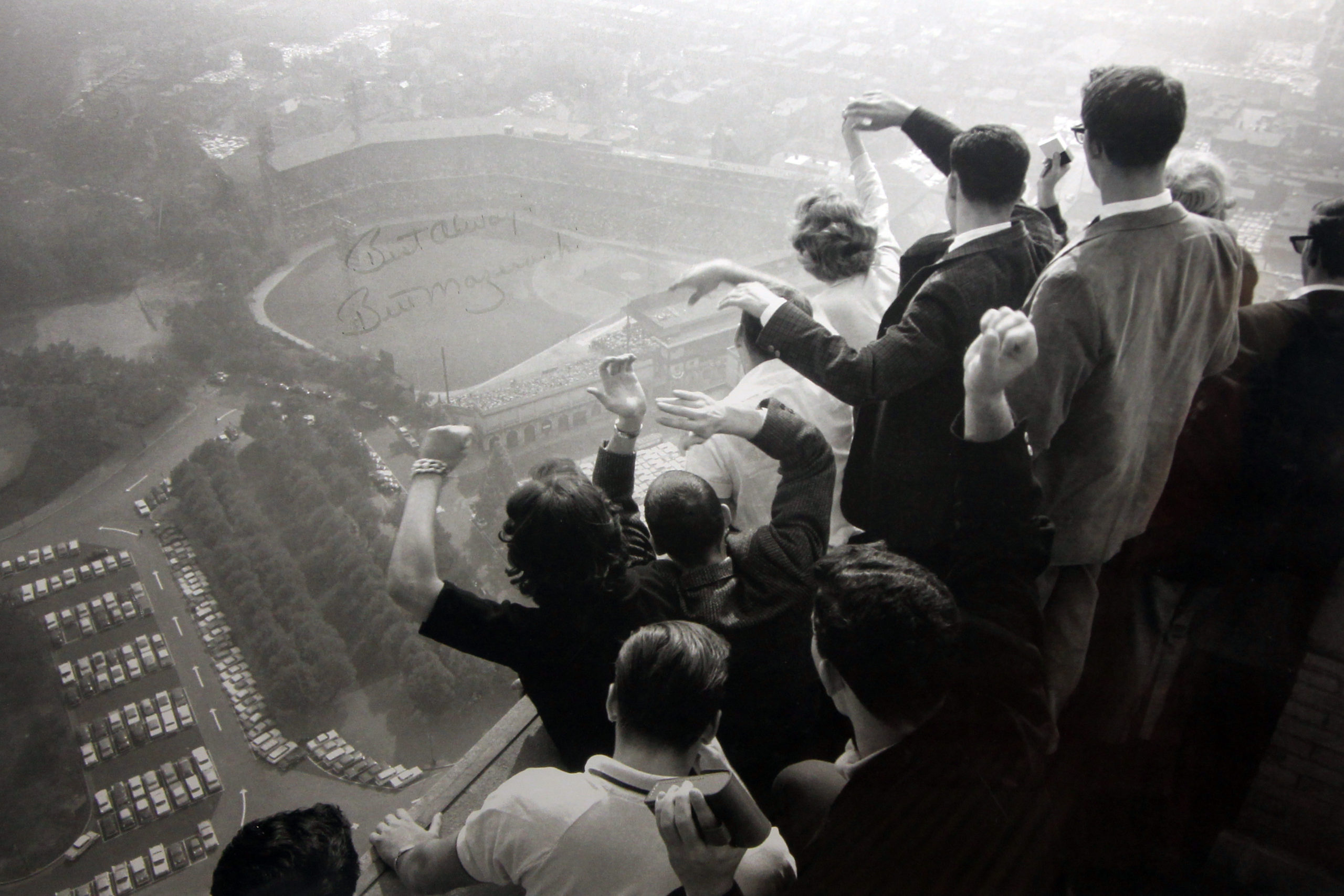 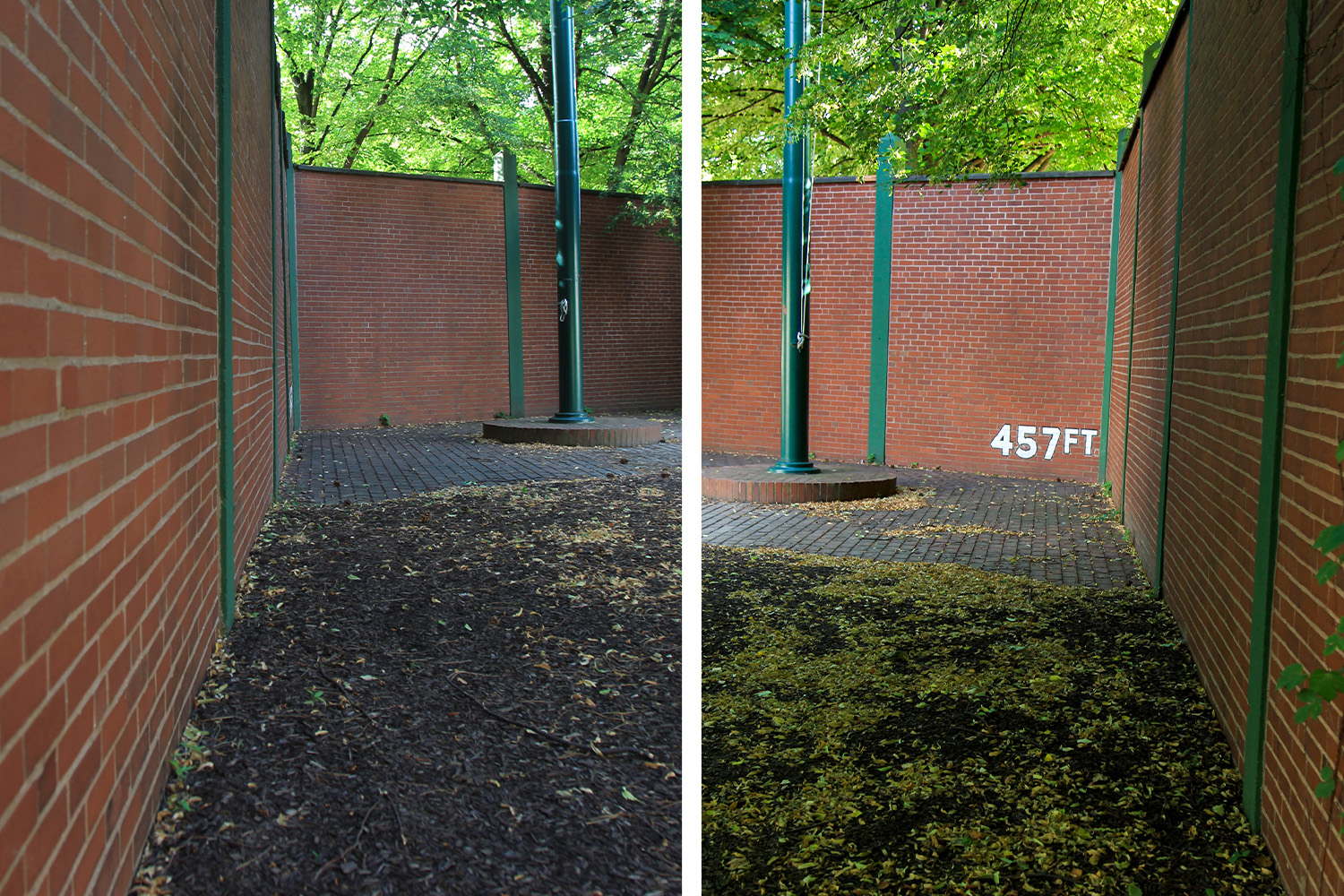 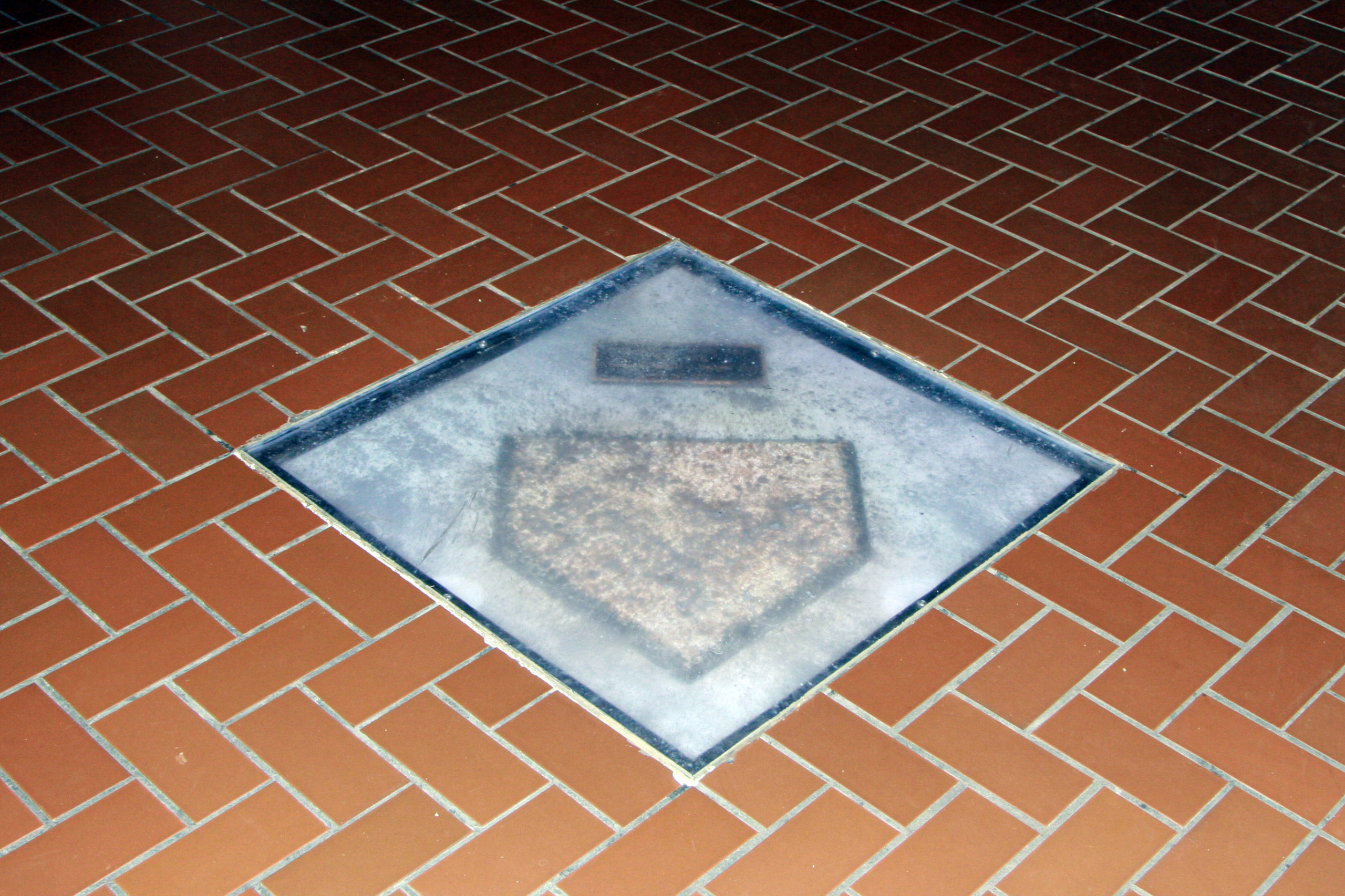 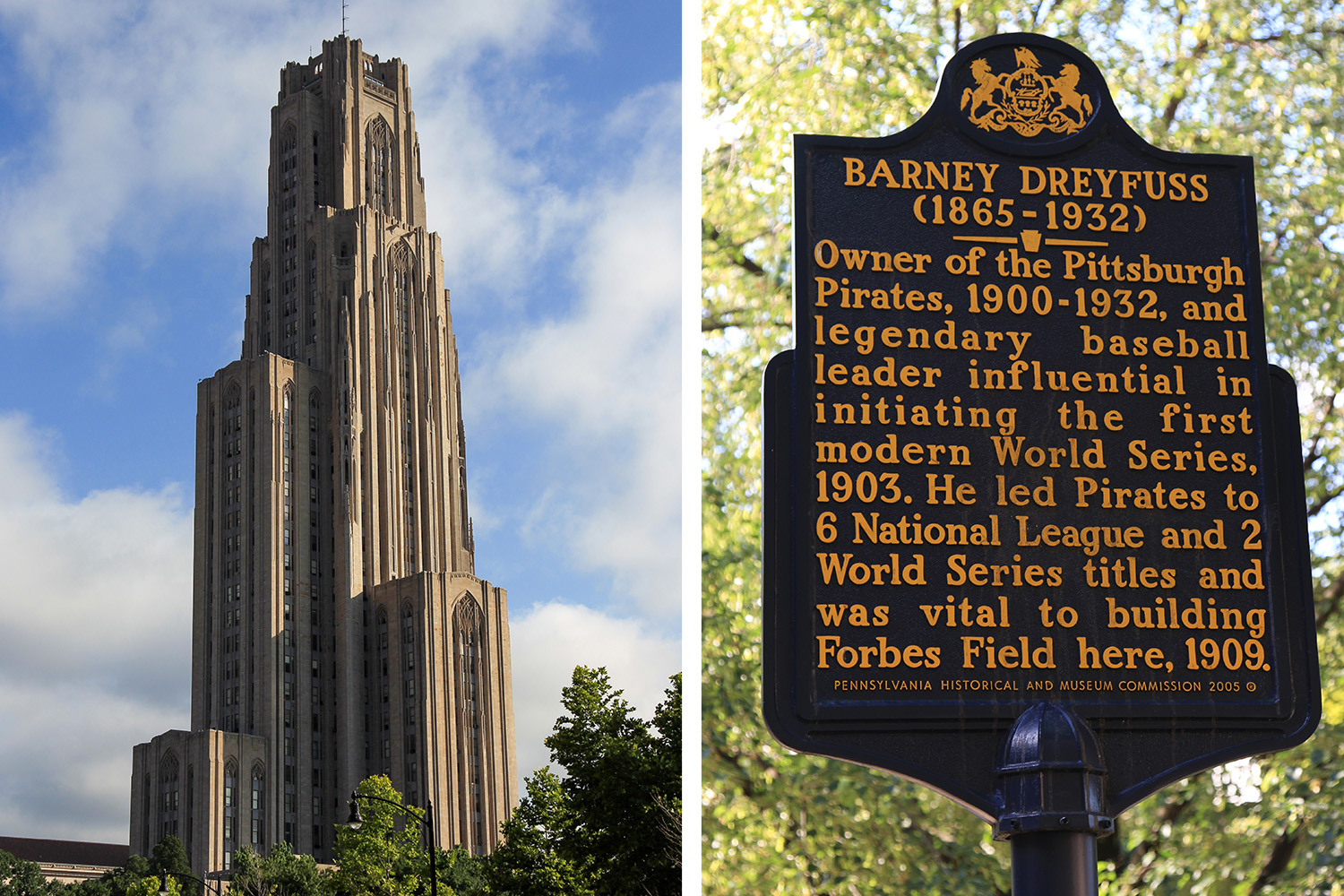 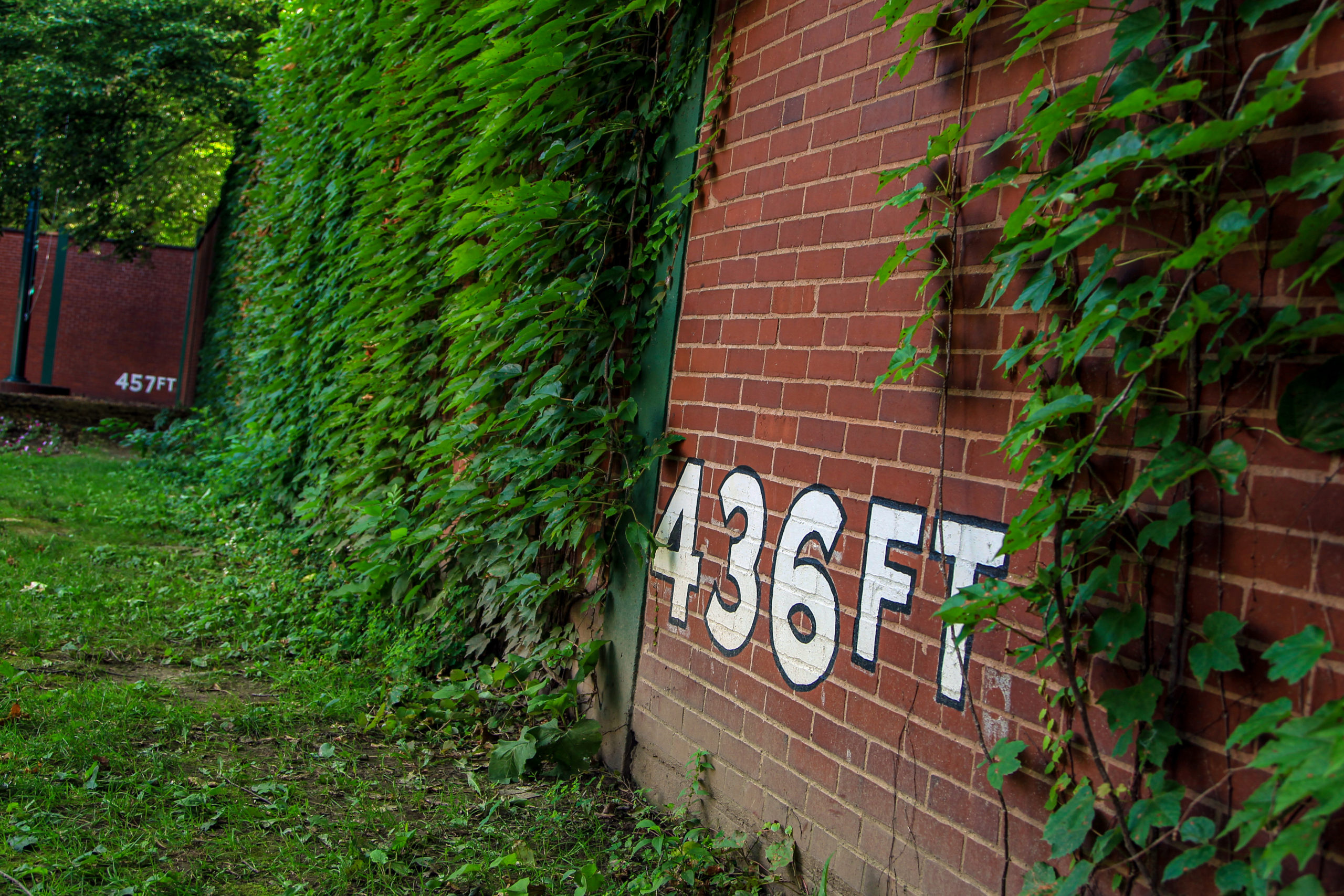 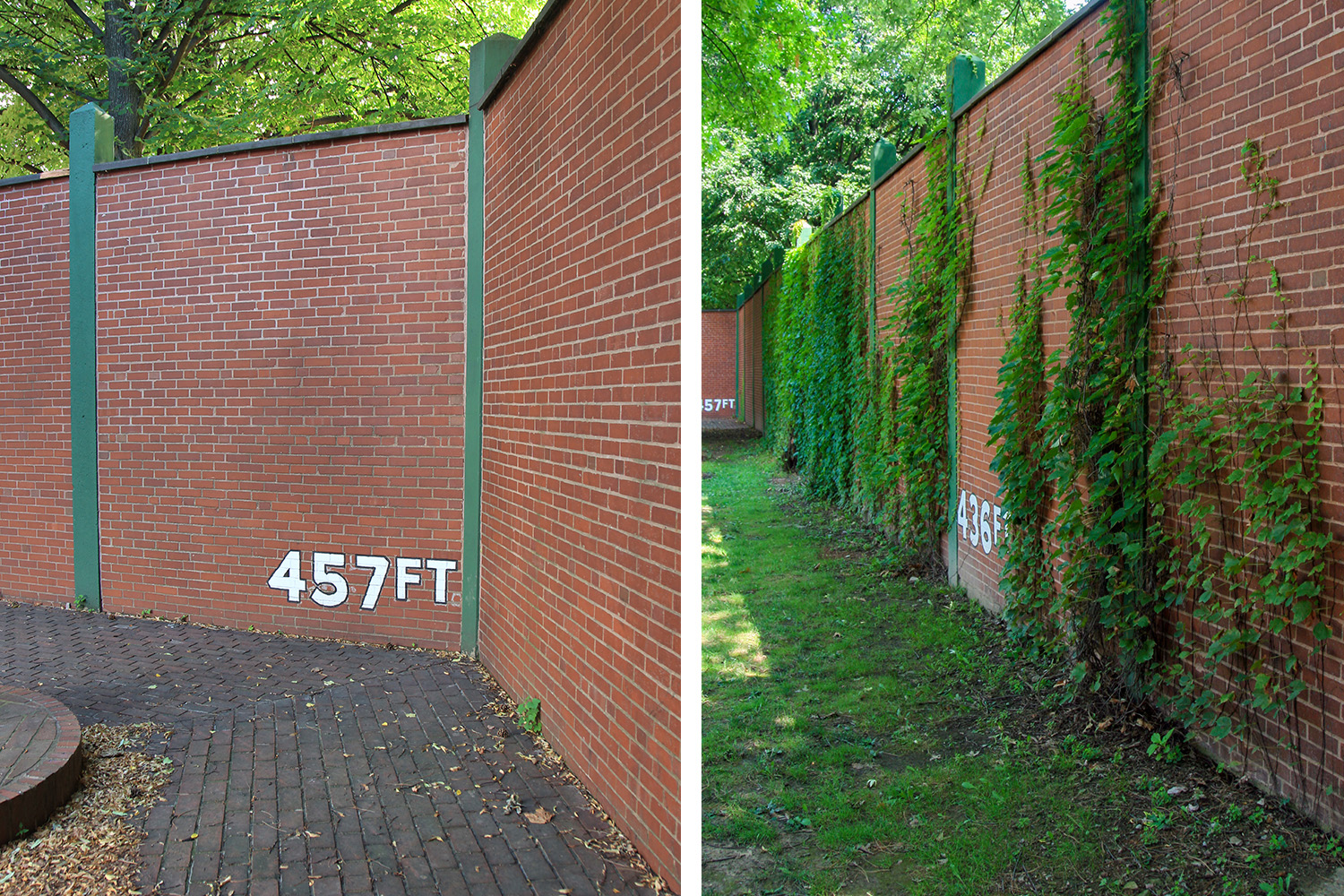 The 1909 season also marked the beginning of a new era in ballparks as the Pirates christened Forbes Field on June 30 that year. Since 1891, the Pirates had called Exposition Park — which was located on virtually the same site as Three Rivers Stadium — their home. Described as the “Hialeah of Ballparks” when it opened, Forbes Field would remain the home of the Pirates for six decades and would host many great moments.

On May 25, 1935, Babe Ruth hit the last home run of his Major League career in Forbes Field. The blast cleared the right-field wall, then cleared the screen and finally cleared the doubledeck grandstands. The historic shot (a first of that distance in Forbes Field) was approximately eighty-six feet high and at least three-hundred feet away from home plate. 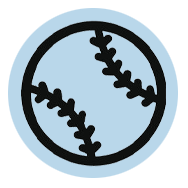 Did you know that the first ballpark elevator was installed here, and during the 1950s, the first outfield wall "crash pads" were installed?

More than four-thousand Major League ball games were played at Forbes Field and a no-hitter was never thrown by any pitcher from any ballclub ever in its history.

This portion of the wall remained after Forbes Field was torn down, and was refurbished in 2006 in time for the All-Star Game hosted in Pittsburgh.

On August 5, 1921, Forbes Field was the site of the first MLB game broadcast on the radio. Harold Arlin announced the game over KDKA from a box seat next to the first-base dugout.

Though Forbes Field was praised upon its opening, it began to show its age after 60 years of use. The park was the second oldest baseball field in the league at the time—younger than only Shibe Park in Philadelphia.