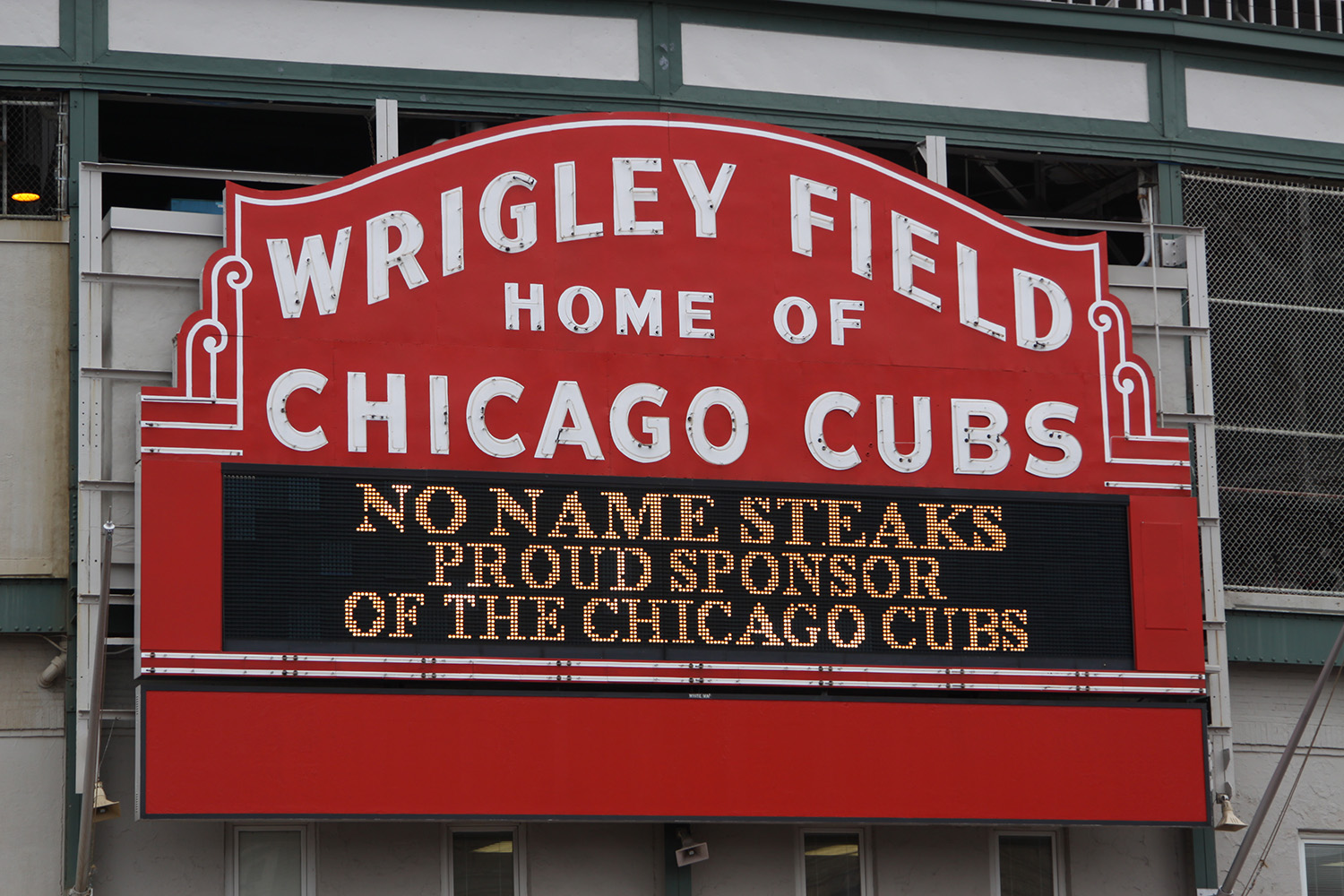 The iconic red marquee over the main entrance at Wrigley Field, the home of the Chicago Cubs in Chicago, Illinois on Aug. 28, 2009. (Photo: Gordon Donovan)

Between 1921 and 1970, it was also the home of the Chicago Bears of the National Football League. Most recently it hosted the second annual National Hockey League Winter Classic on January 1, 2009.

The area surrounding the ballpark contains residential streets, in addition to bars, restaurants and other establishments and is called Wrigleyville. The ballpark's mailing address is 1060 W. Addison Street. 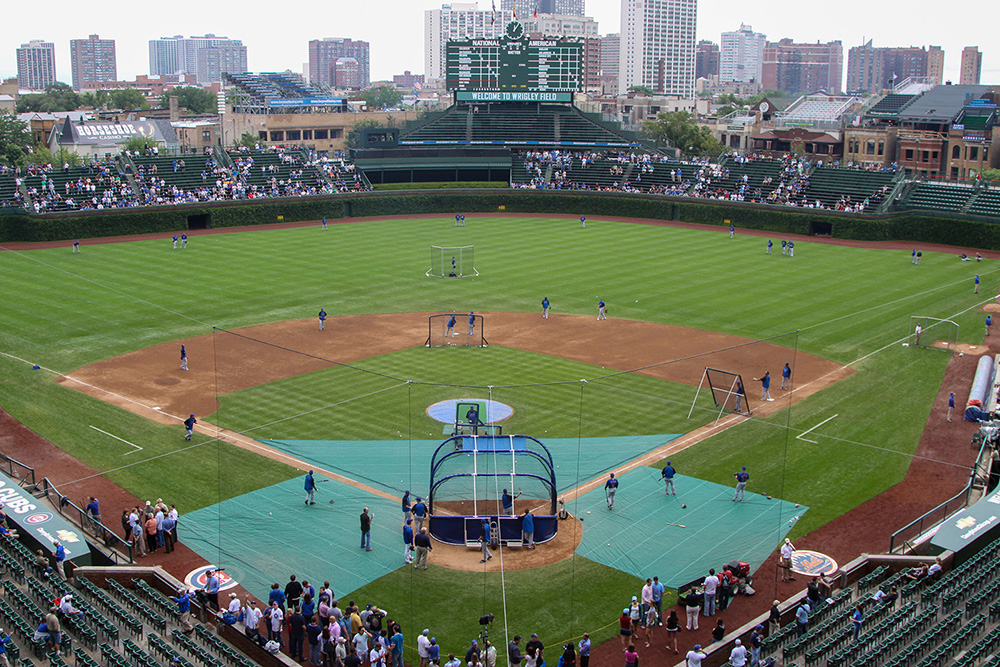 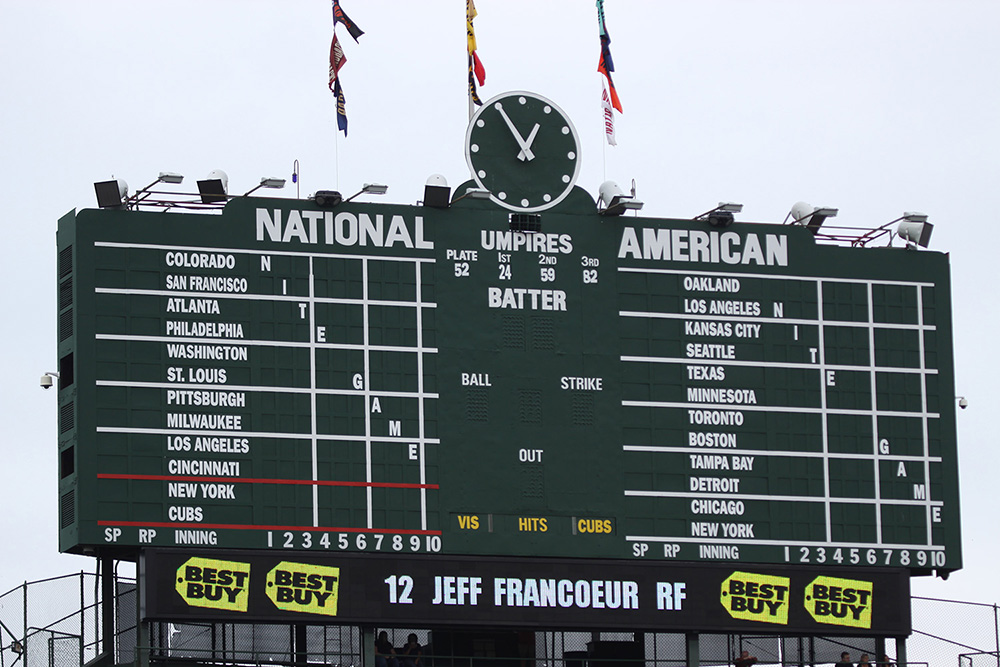 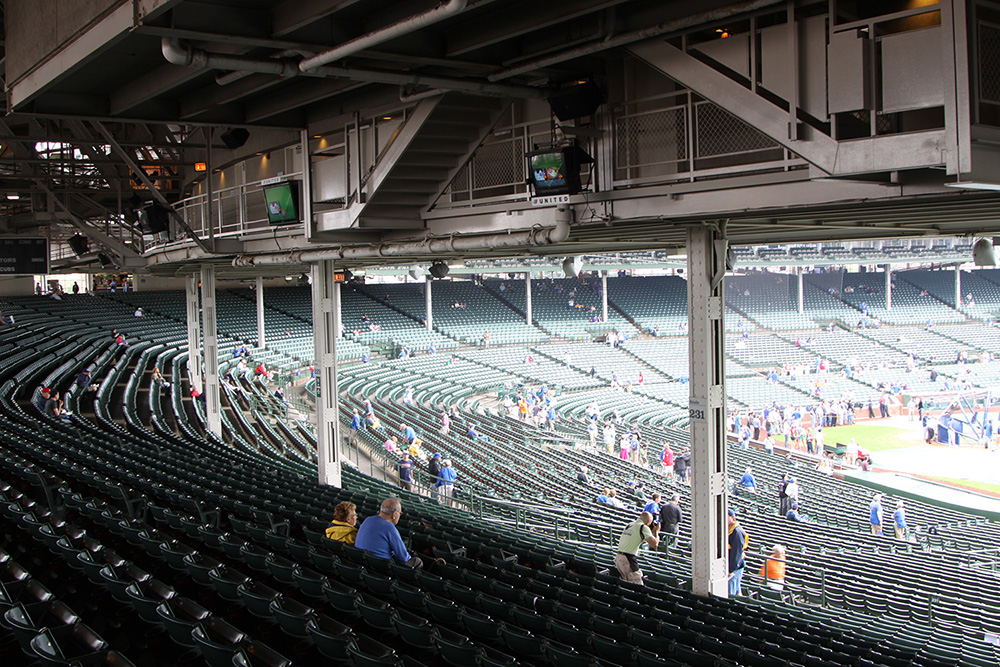 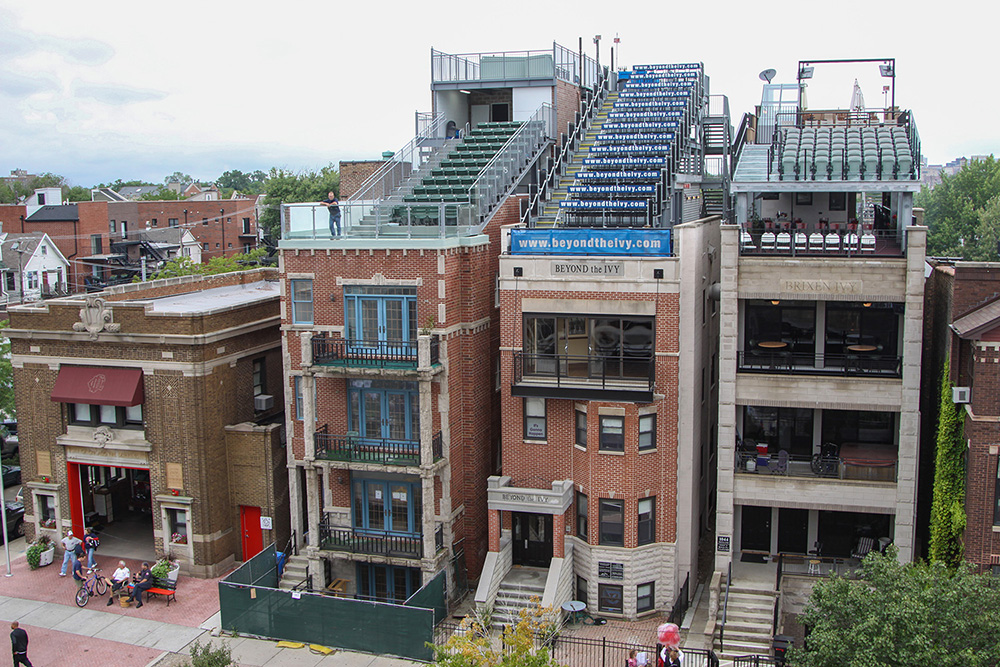 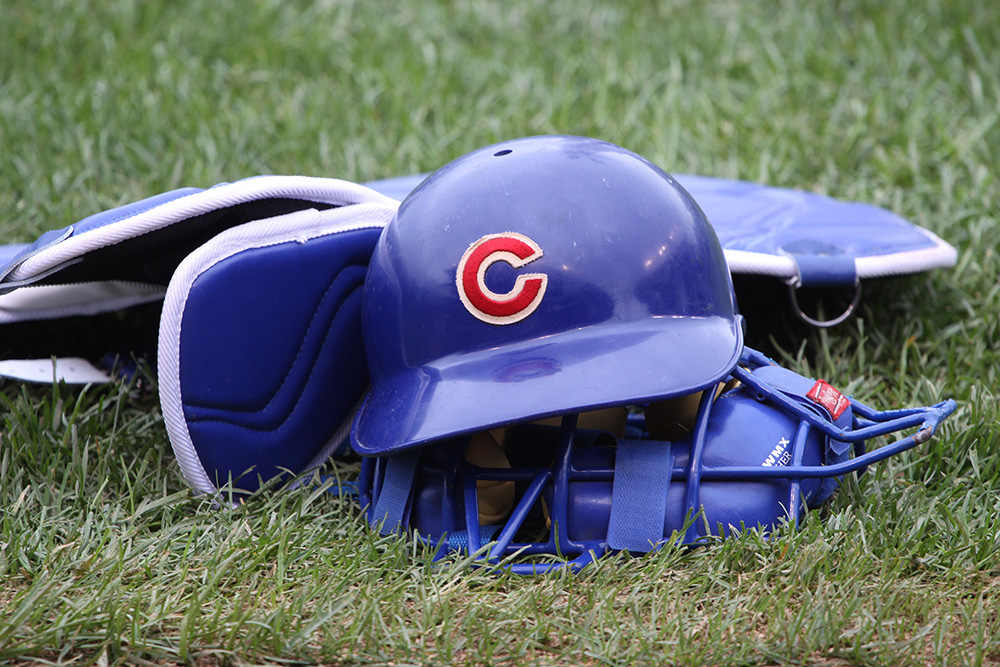 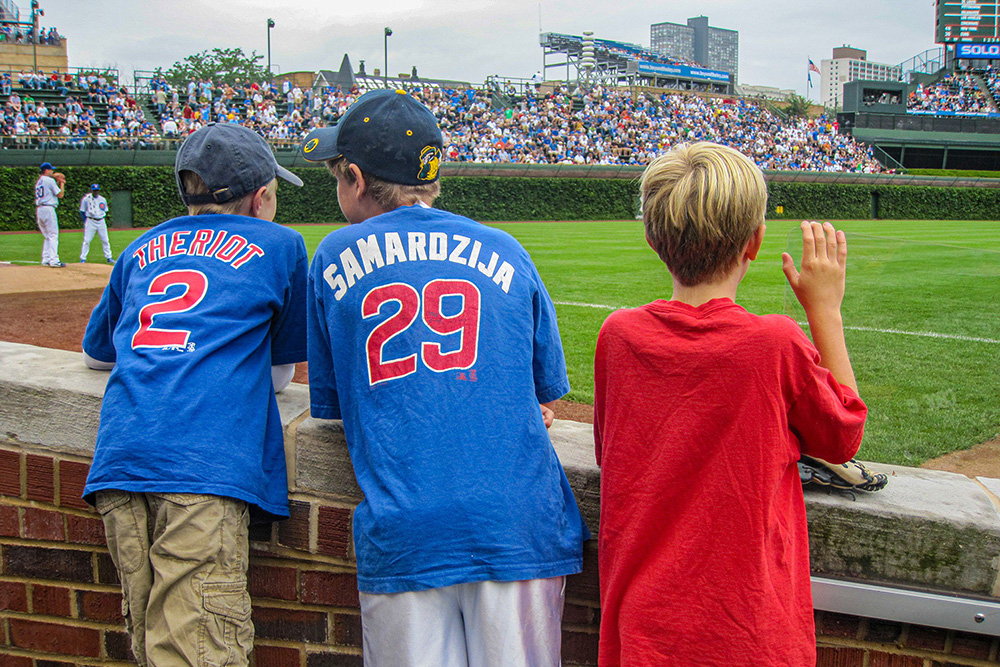 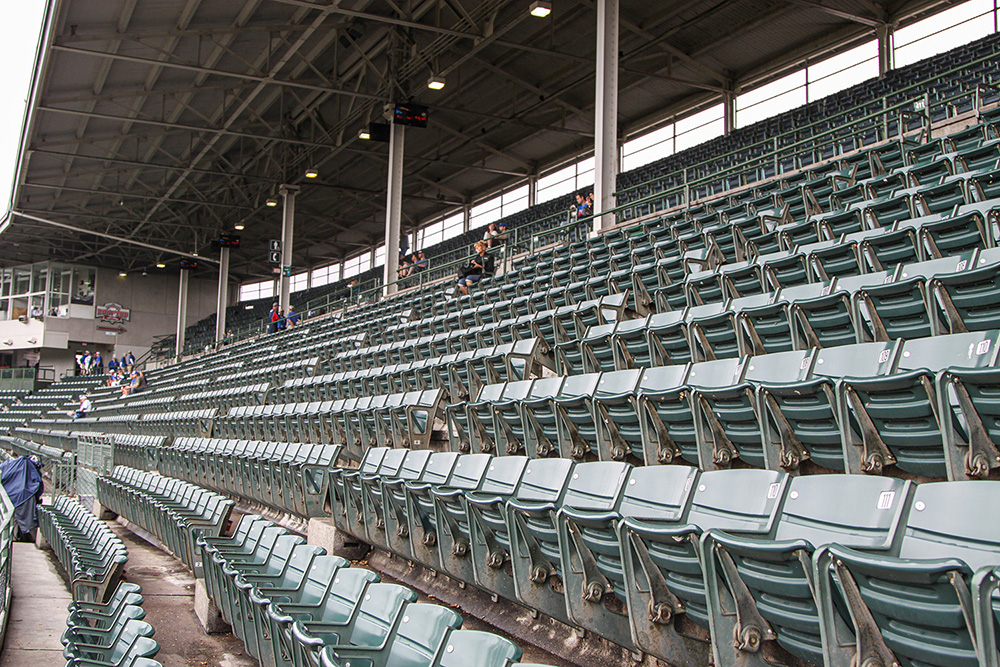 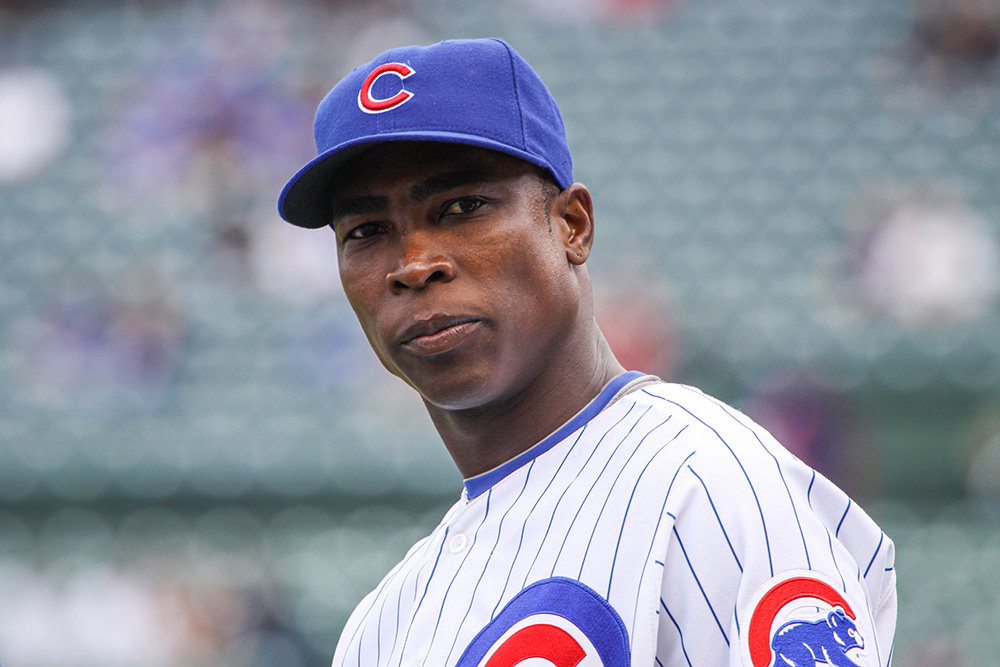 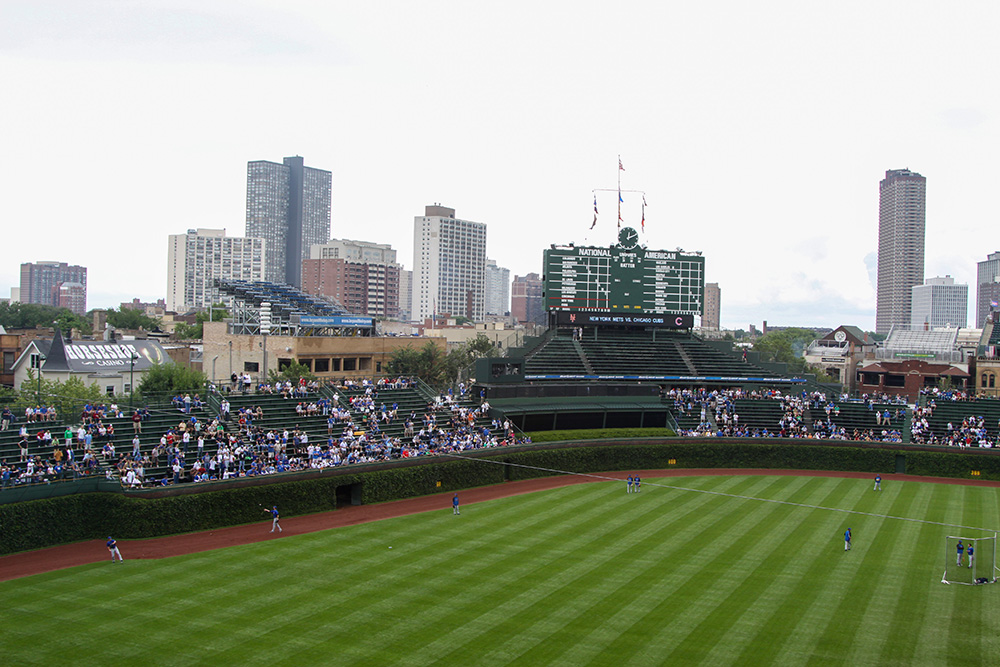 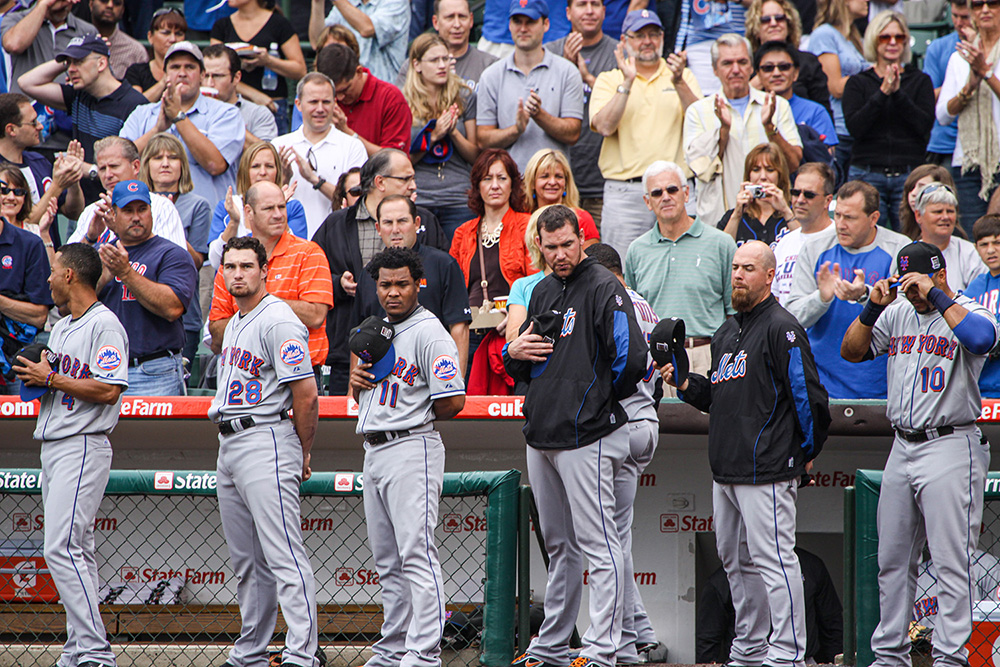 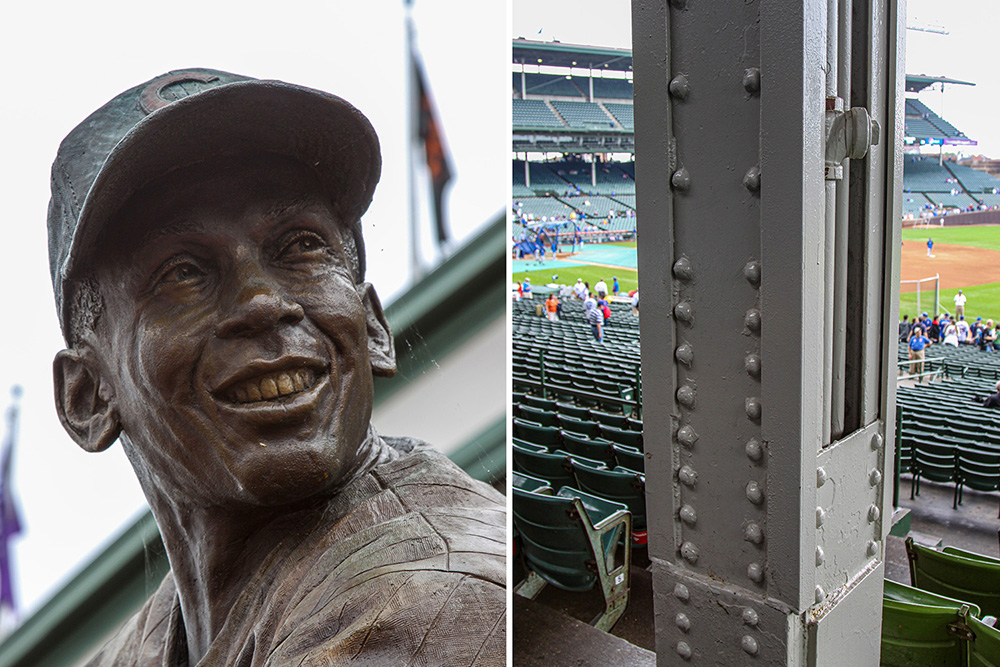 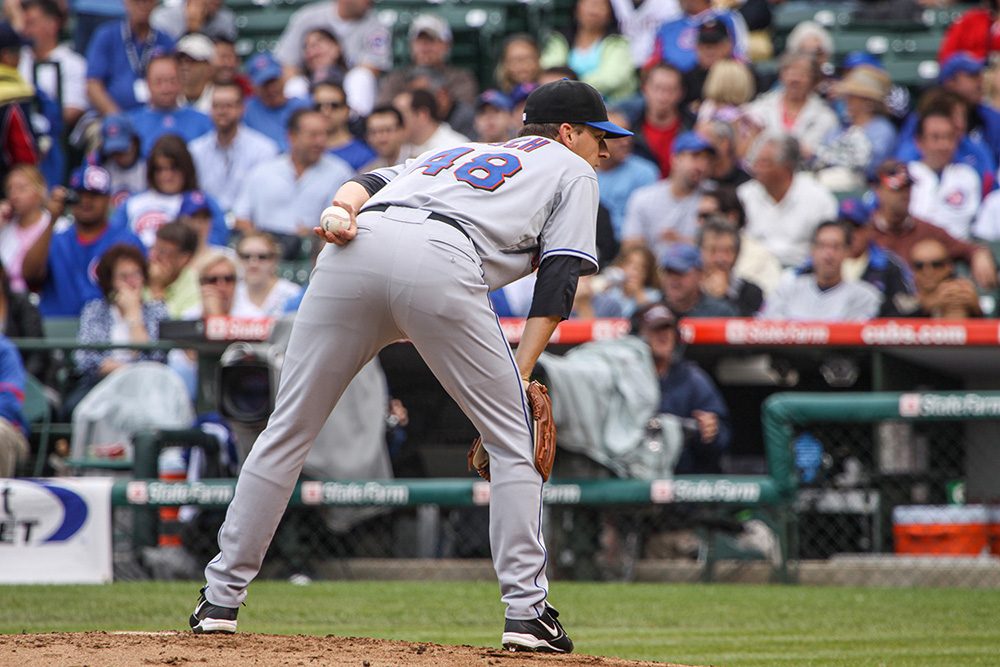 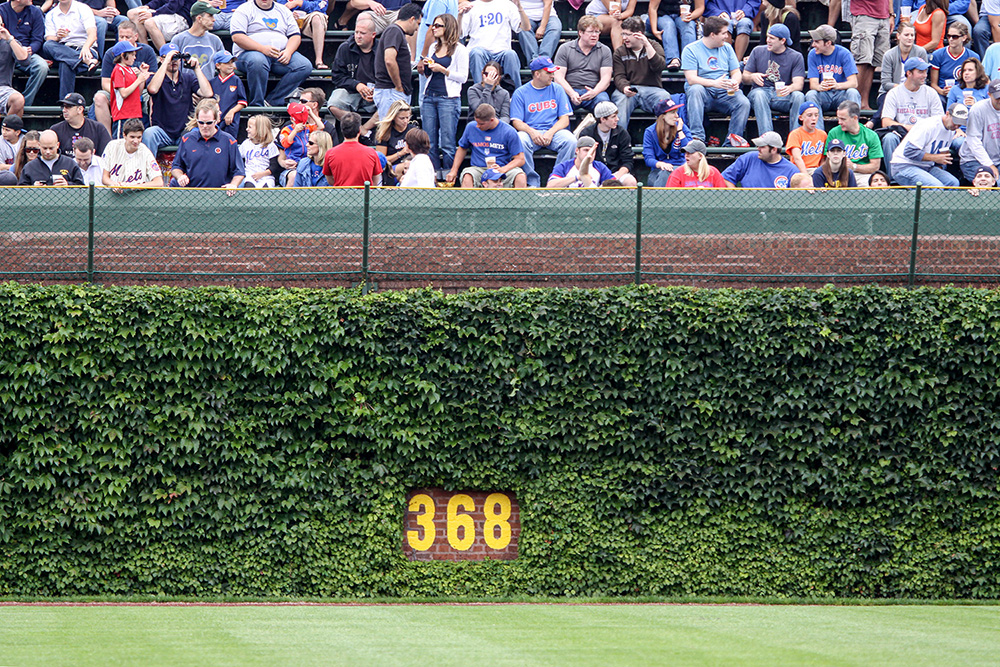 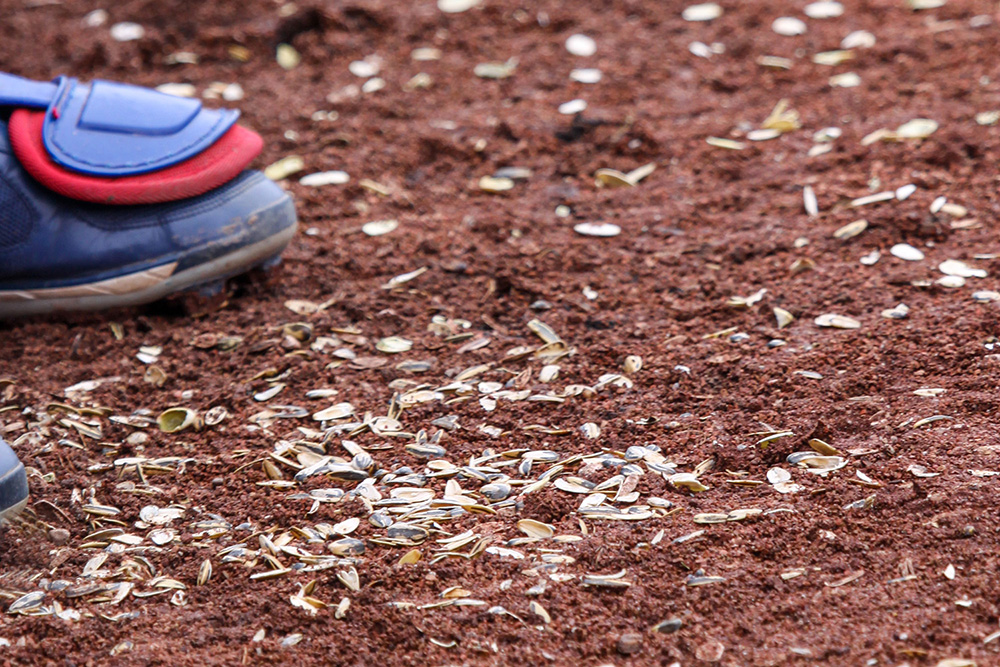 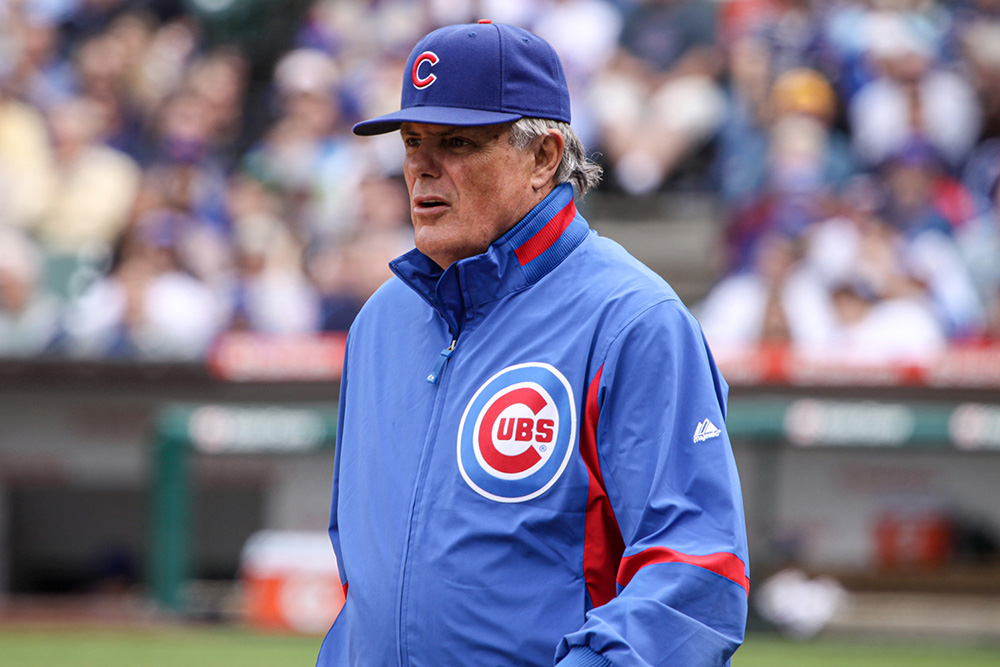 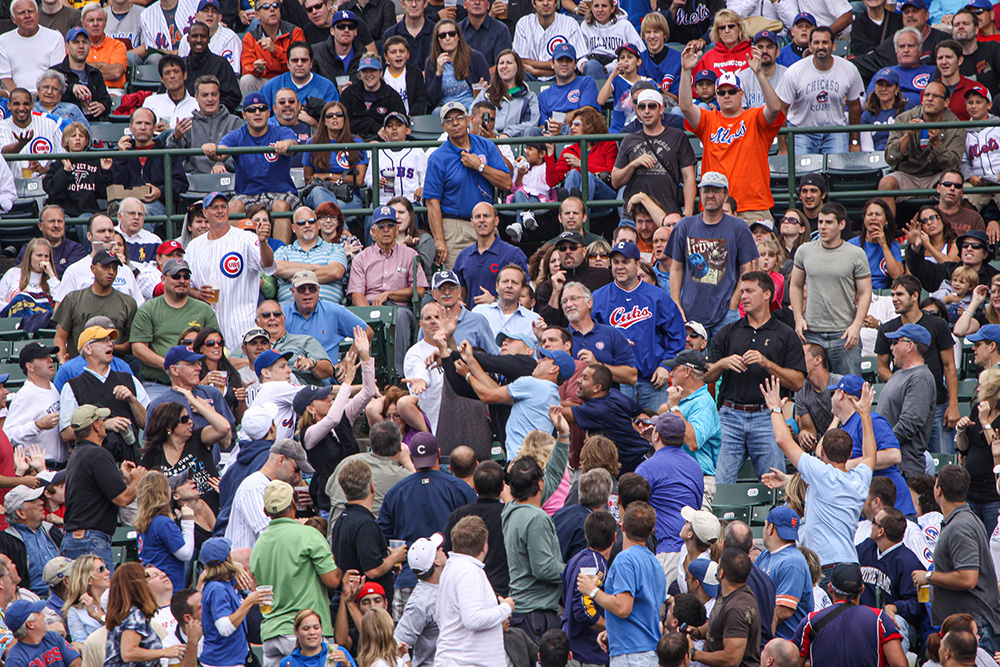 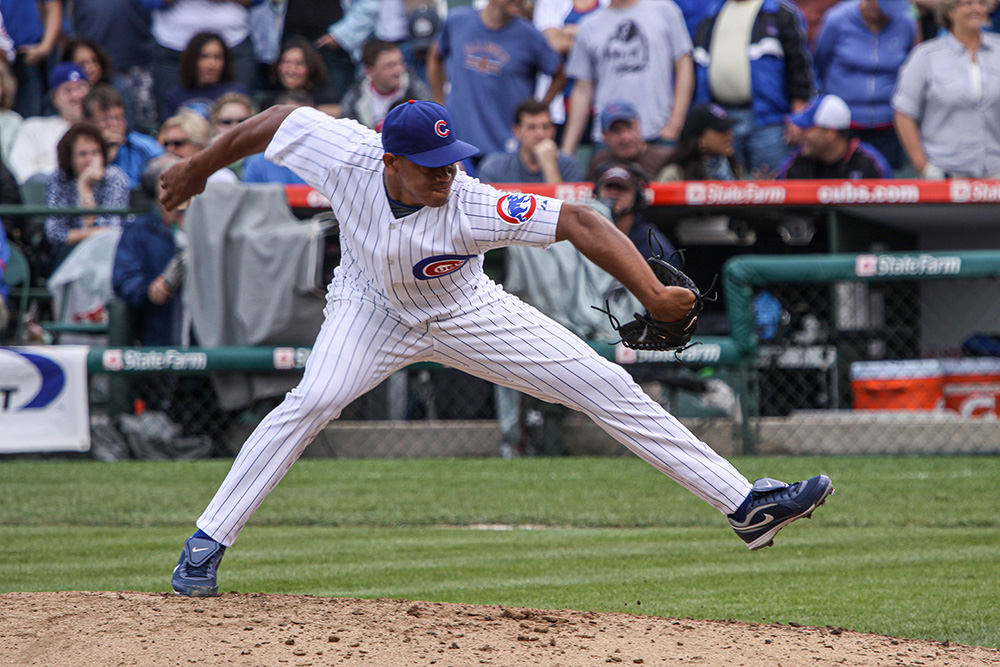 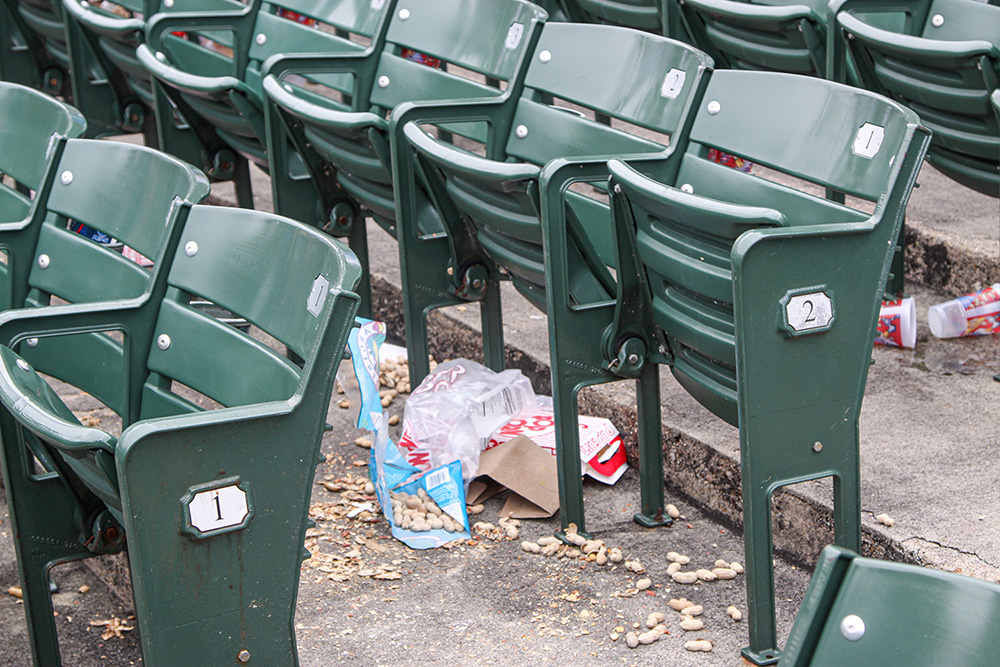 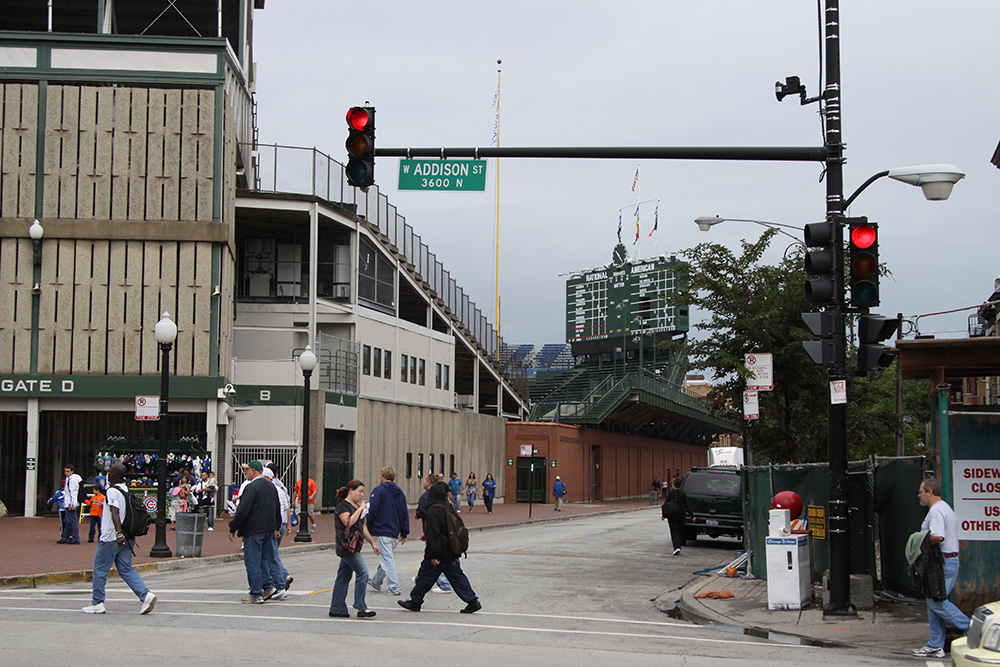 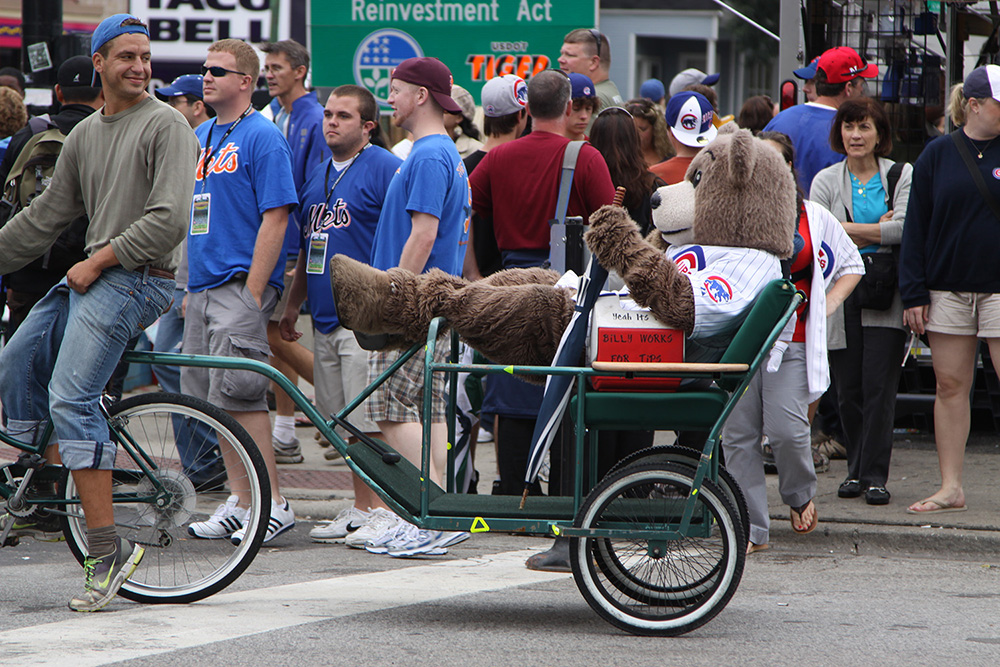 Ballpark: C - Although many people think Fenway Park and Wrigley Field are great old ballparks, the truth is that the seating is crammed with narrow aisles. Many of the seats are rusty and uncomfortable. The corridors are tight and hard to pass. Did not see any balls eaten up by ivy covered walls.

Fans & Atmosphere: A - On a crumby weather day in the middle of the week, the ballpark is filled. Despite the fact the Cubs are out of contention against another non-contending team, the New York Mets.

Food: F - Had to be the worst food I ever had. Tossed some of it out. Chili dog, chicken fingers and soda for $20.00. Had pizza down the block afterwards.

Mascot: INC - No mascot for the old school team. Saw a guy dressed as a bear on streets posing for photos after game.

Staff: A - Surprisingly friendly and helpful. One security guard was very kind and insisted we take photos with him. Walking around ballpark taking staff was inviting and kind.

Team Tradition: A - The Cubs have not won the World Series in 104 years, the longest championship drought of any major North American professional sports team and are often referred to as "The Lovable Losers" because of this distinction.

Location: A - Located in Chicago's north side Lake View community at 1060 West Addison Street. Limited parking and the train was the best way to get to Wrigley. I flew in and took train to game and train back to airport after game.