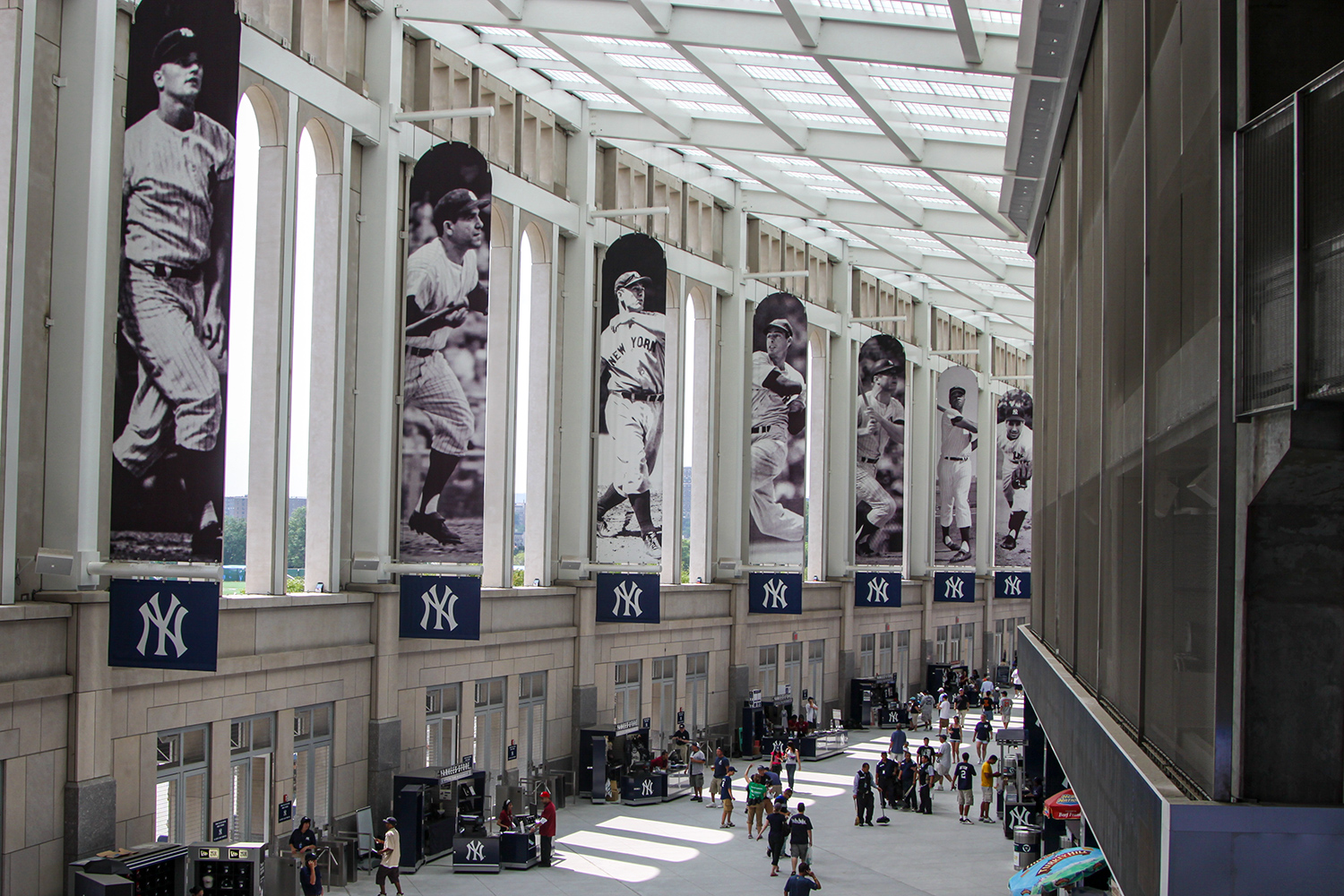 The Great Hall at Yankee Stadium, the home of the New York Yankees in the Bronx, New York City on July 22, 2009. (Photo: Gordon Donovan)

The interior, a modern ballpark with greater space and increased amenities, features a playing field that closely mimics the 1988–2008 dimensions of the old park. The current stadium features 4,300 club seats and 68 luxury suites.

The controversial price tag was $1.5 billion, which makes it not only the most expensive baseball stadium ever built, but the second-most expensive stadium of any kind (after MetLife Stadium in East Rutherford, New Jersey).

Although Yankee Stadium has been praised for its amenities and its usage of "classic" design elements from the original facility, the new stadium has been widely criticized for fan-unfriendly practices.

Seats within the first eight rows in the lower bowl, called the "Legends Suite", rank among the highest priced tickets in professional sports, with the average ticket in the section selling for $510 and the most expensive single game-day ticket costing $2,600.

During construction of the stadium, a construction worker and avid Boston Red Sox fan buried a replica jersey of Red Sox player David Ortiz underneath the visitors' dugout with the objective of placing a "hex" on the Yankees, much like the "Curse of the Bambino" that had plagued the Red Sox long after trading Ruth to the Yankees. After the worker was exposed by co-workers, he was forced to help exhume the jersey.

The Yankees organization then donated the retrieved jersey to the Jimmy Fund, a charity started in 1948 by the Red Sox' National League rivals, the Boston Braves, but long championed by the Red Sox and particularly associated with Ted Williams.

The worker has since claimed to have buried a 2004 American League Championship Series program/scorecard, but has not said where he placed it. Despite the Yankee terrorist, the new ballpark has a beautiful collection of photographs and other memorabilia from the Yankees proud history in The Bronx. The Yankees Museum is filled with great memories for all baseball fans. 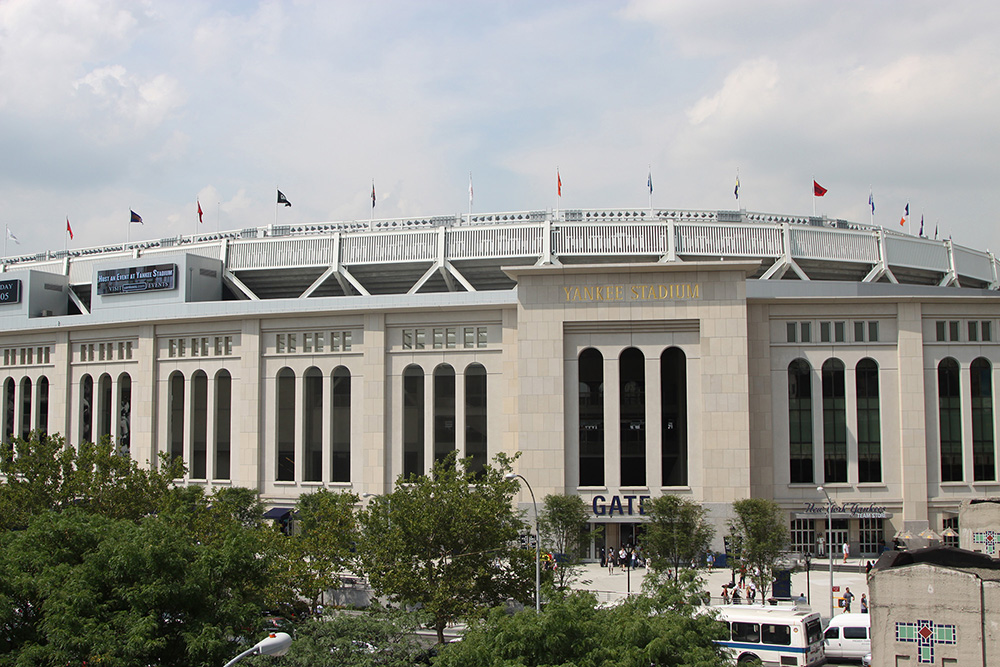 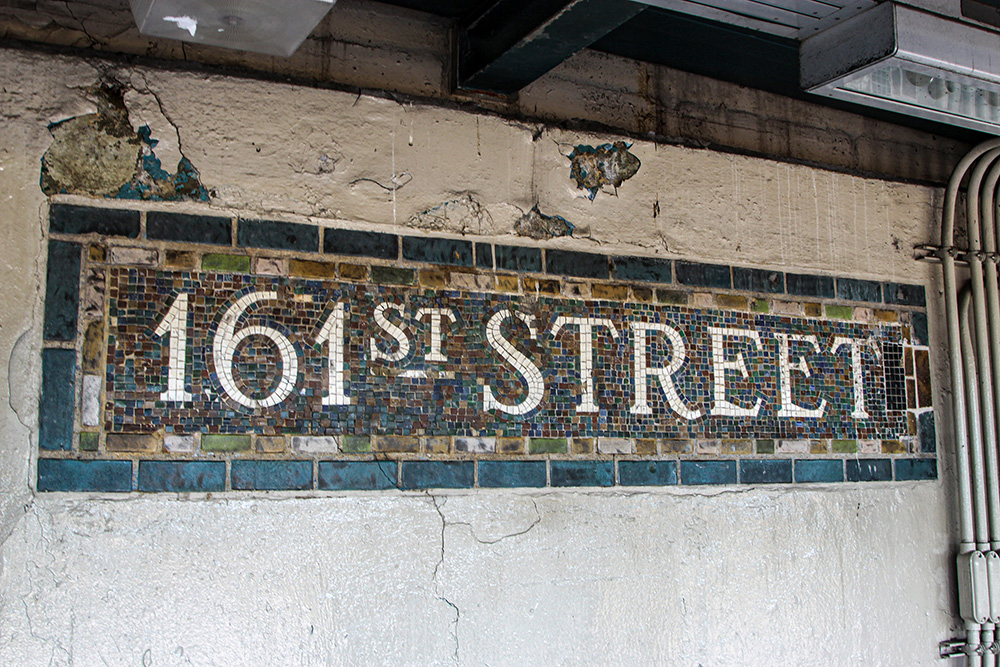 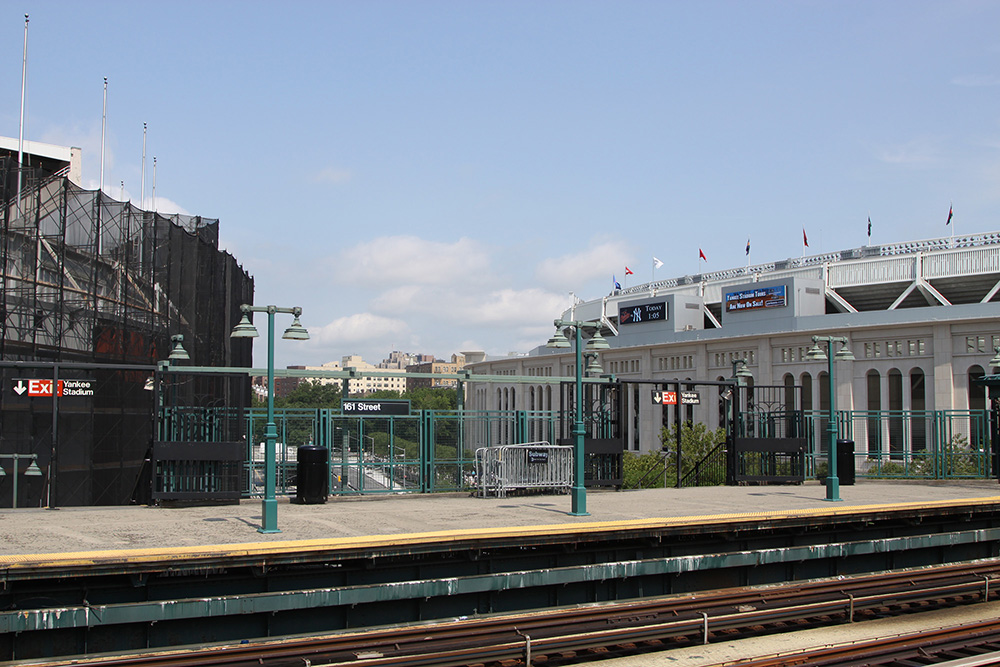 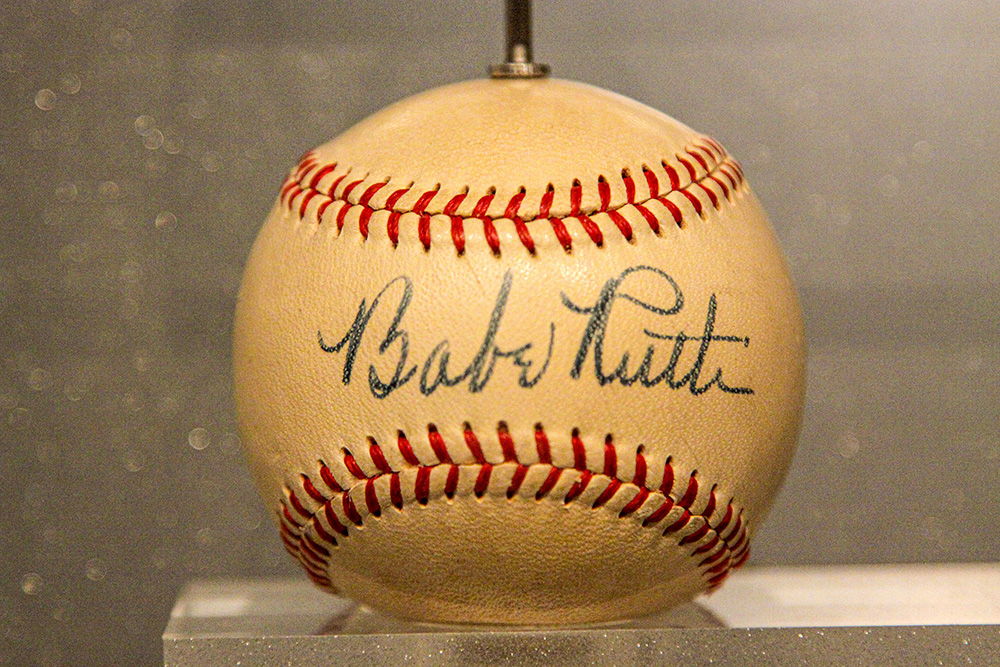 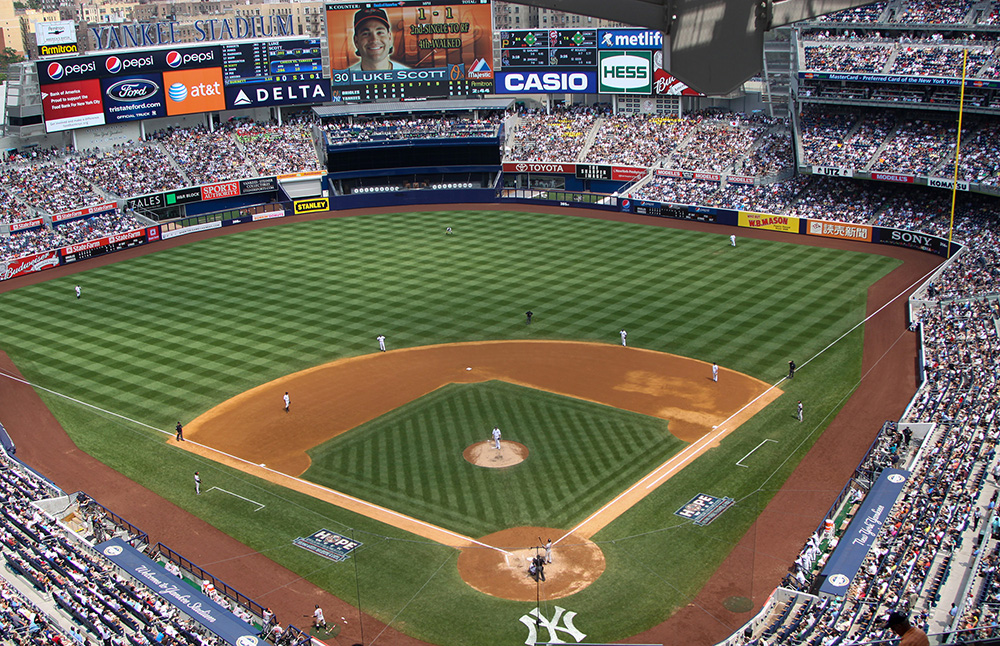 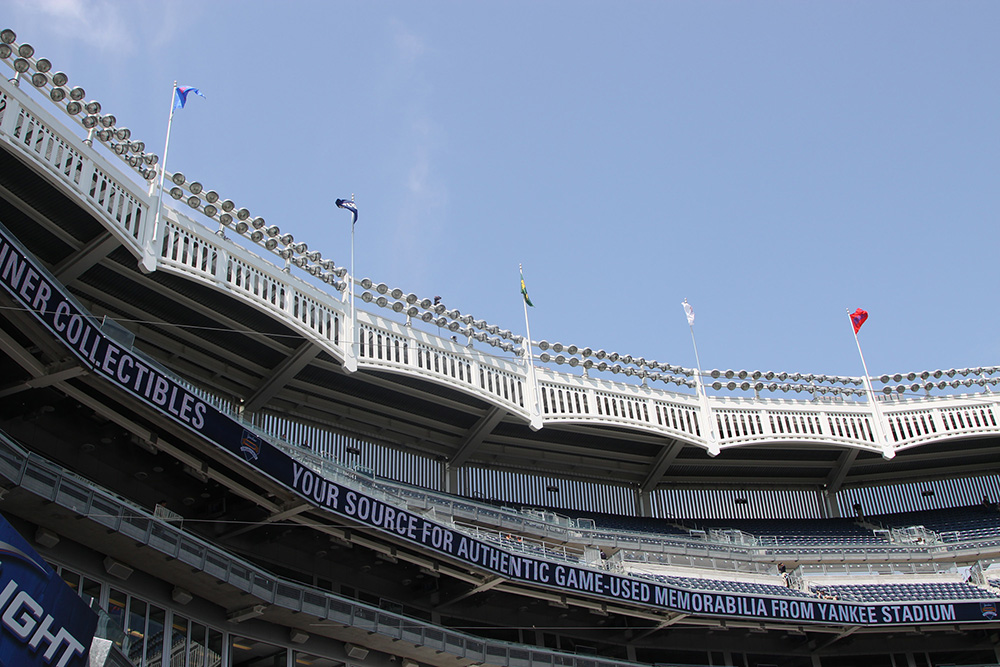 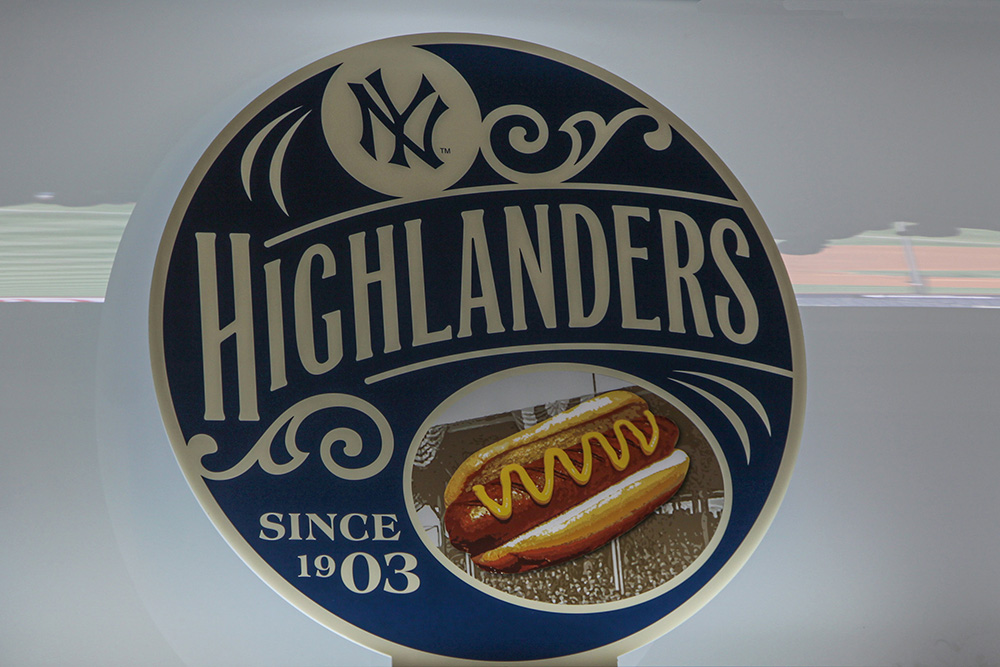 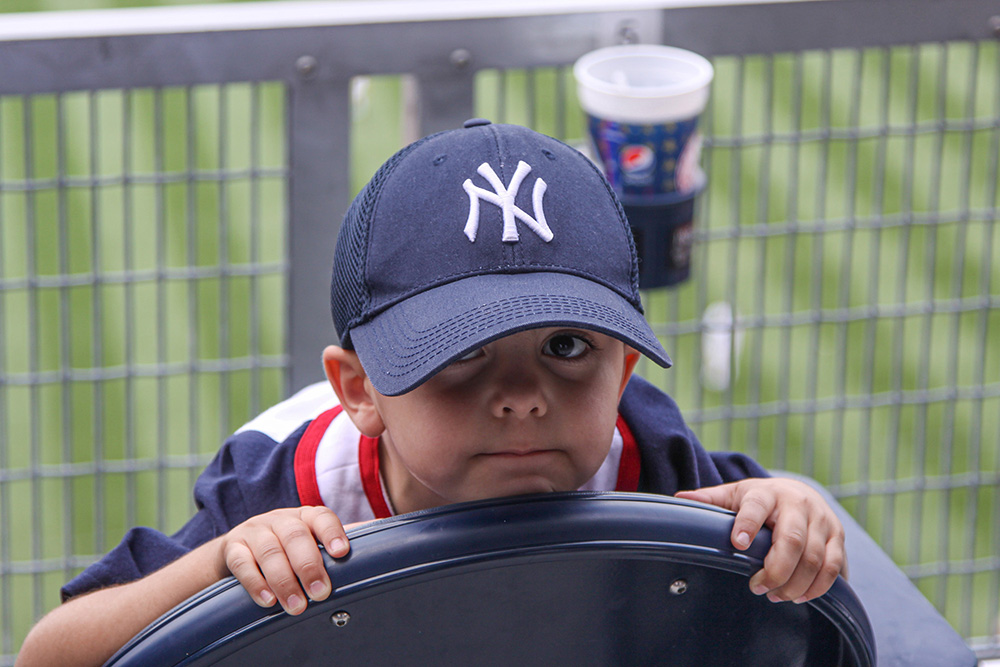 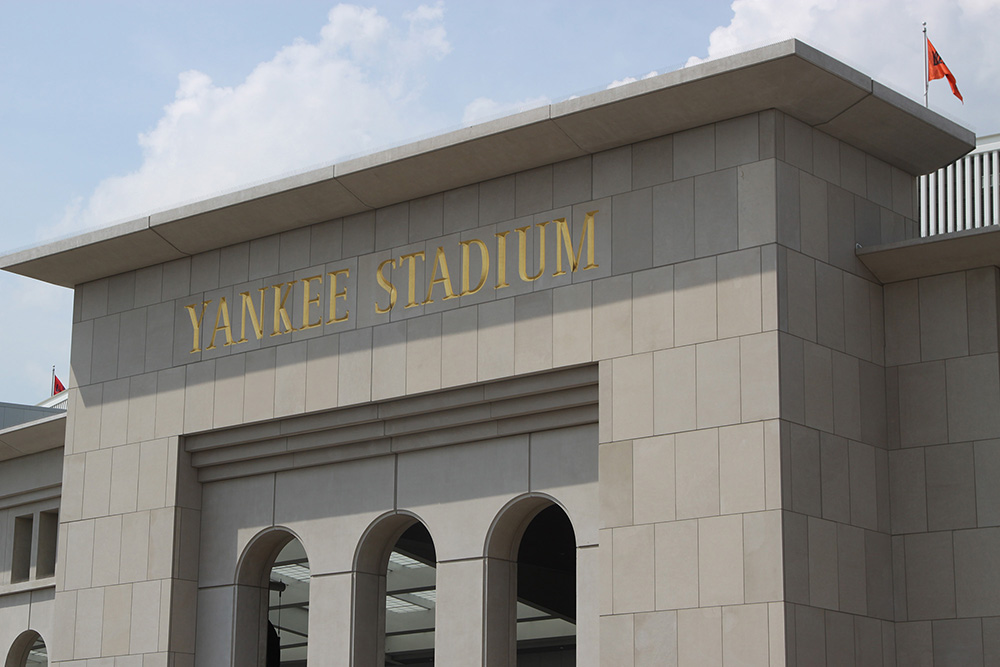 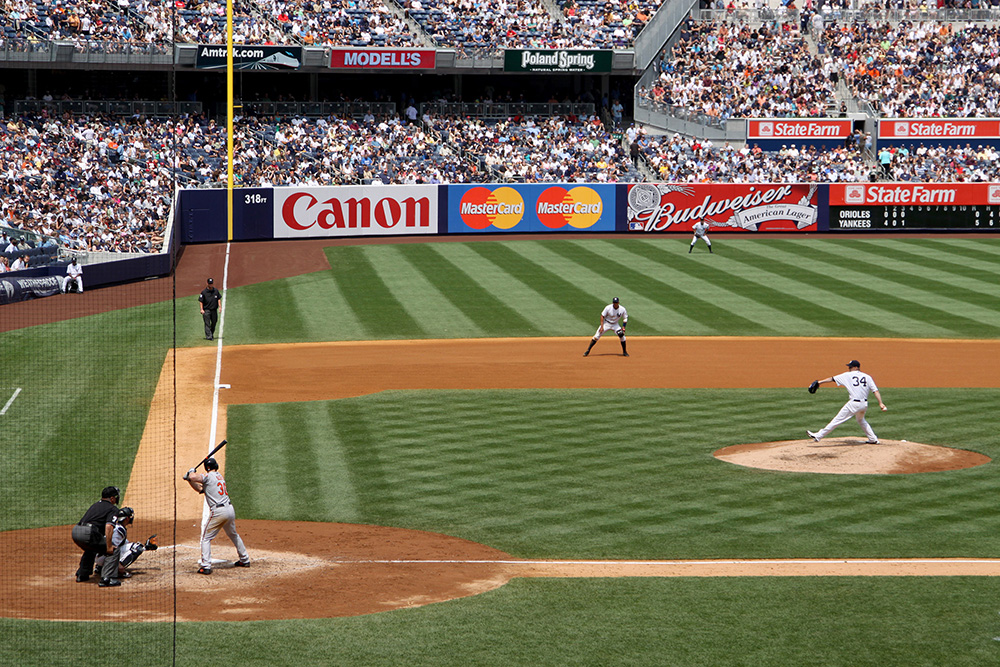 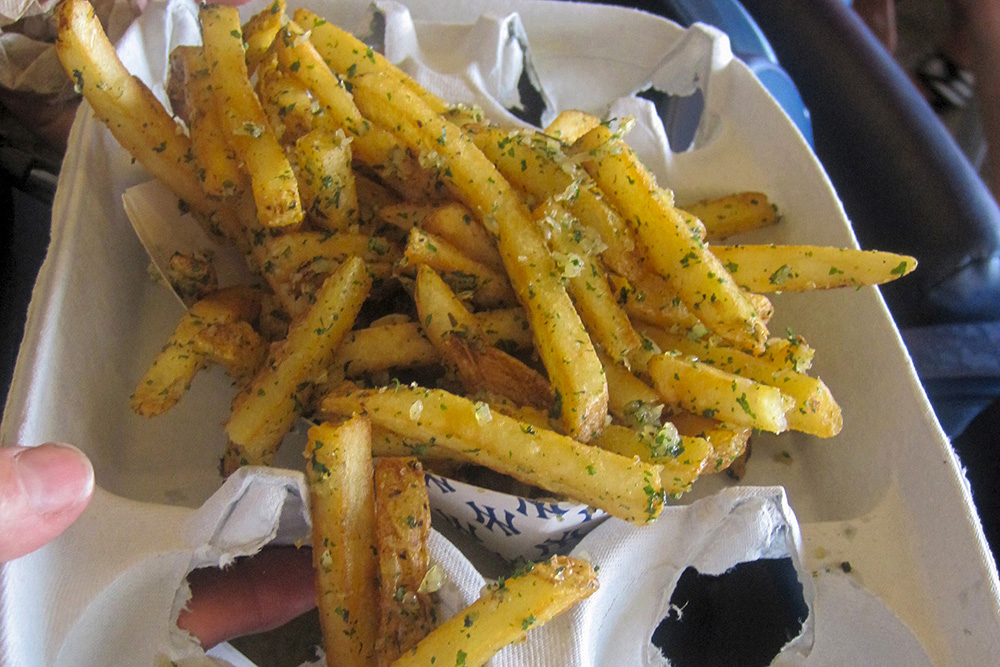 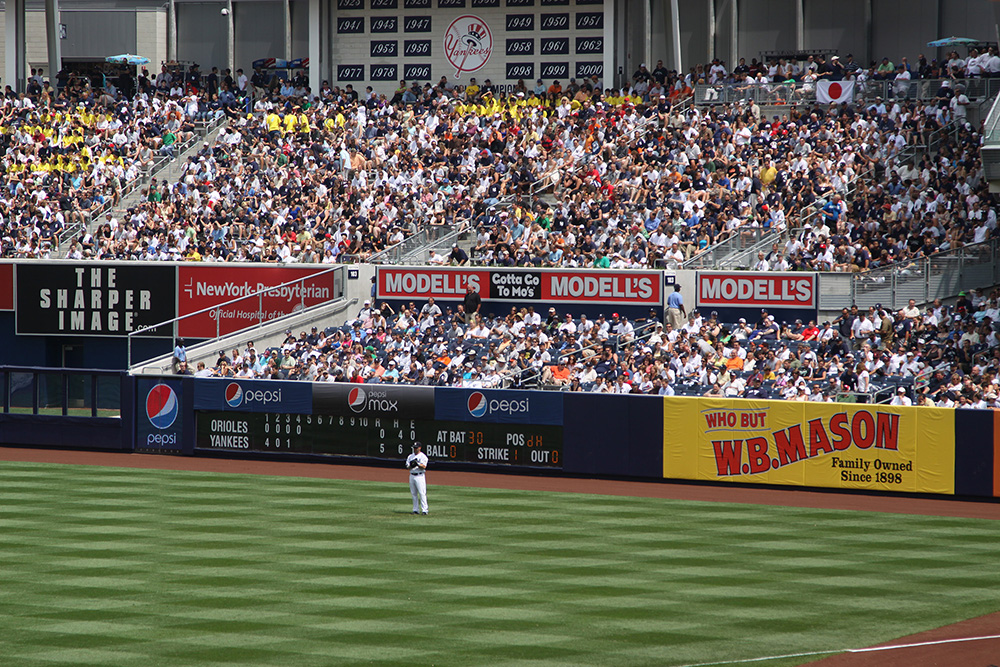 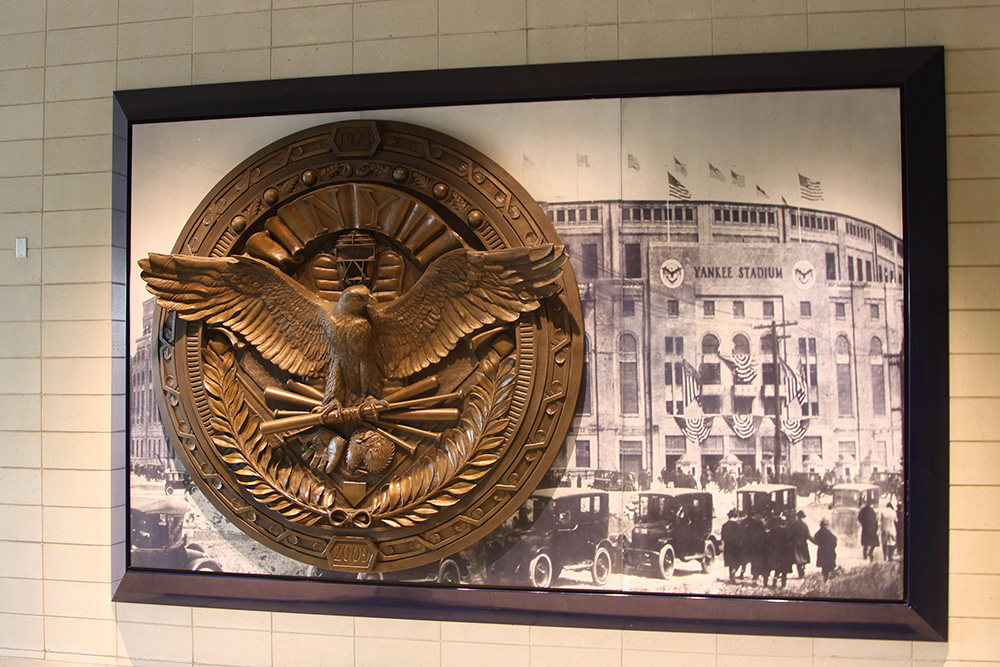 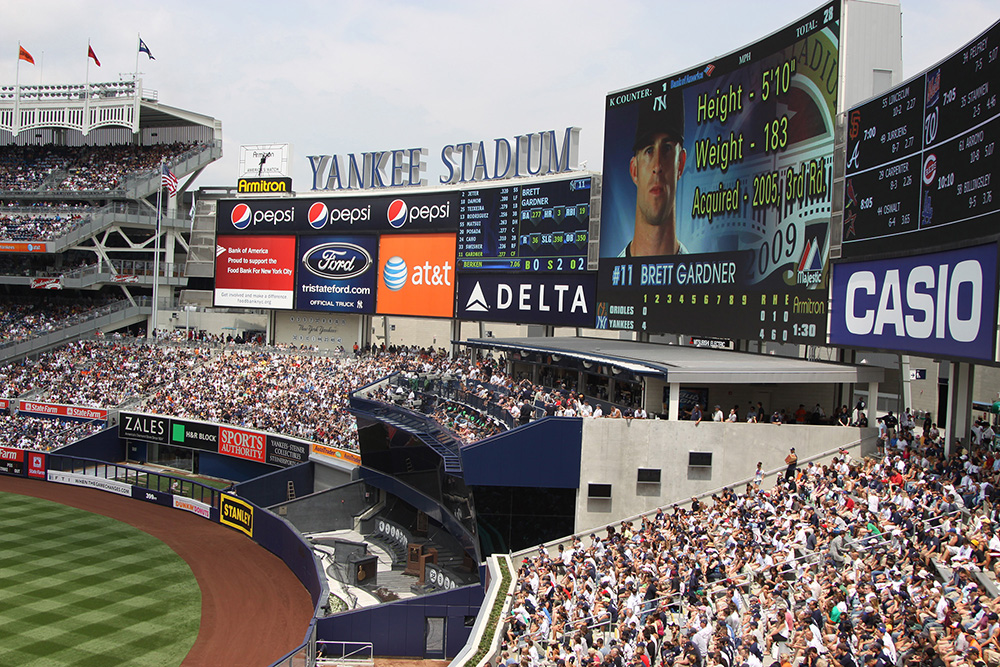 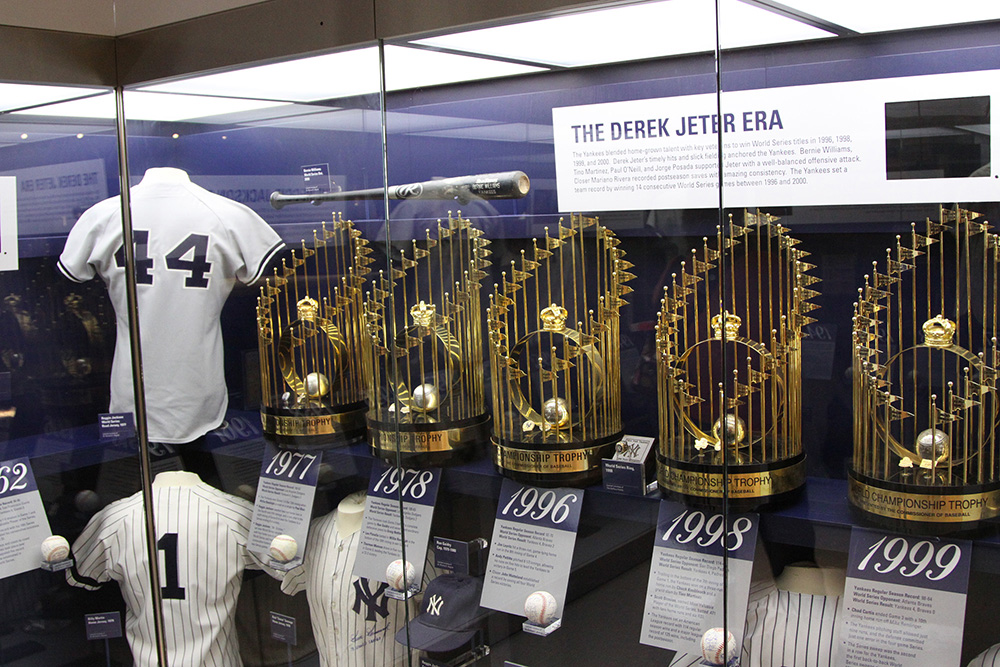 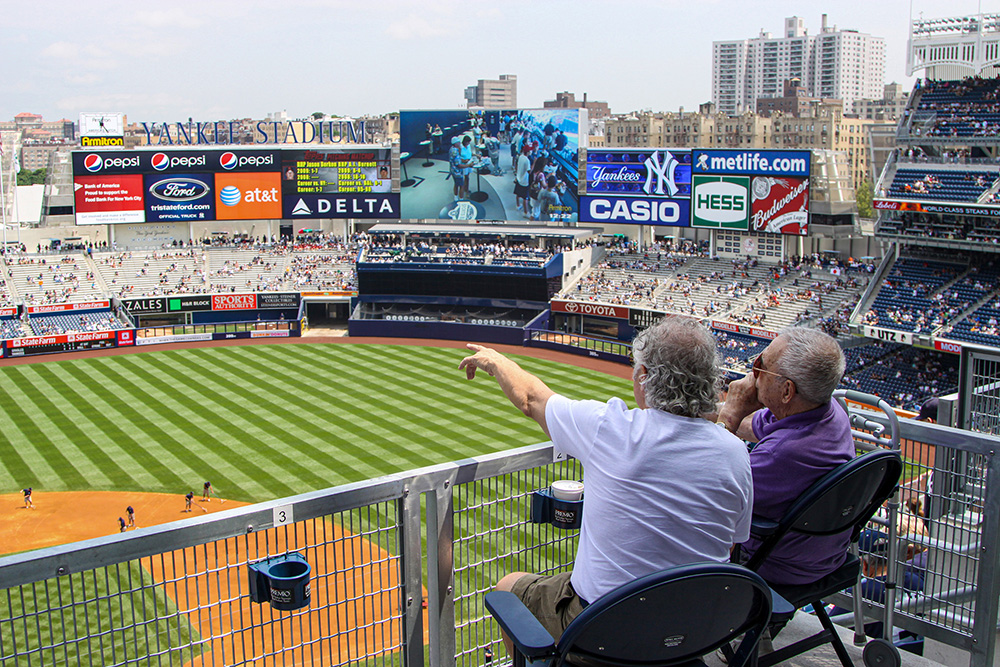 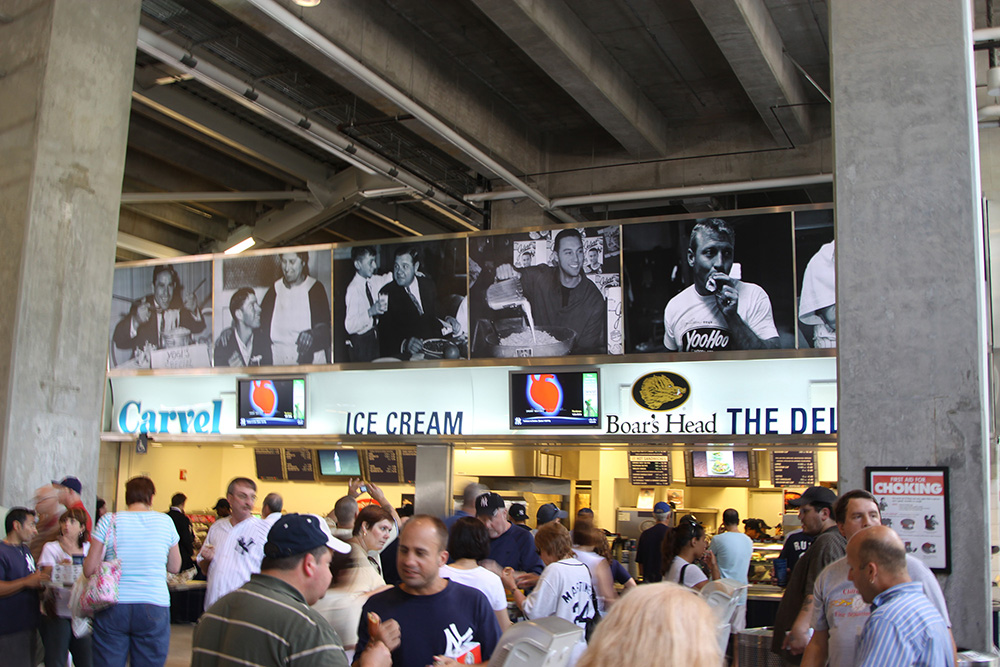 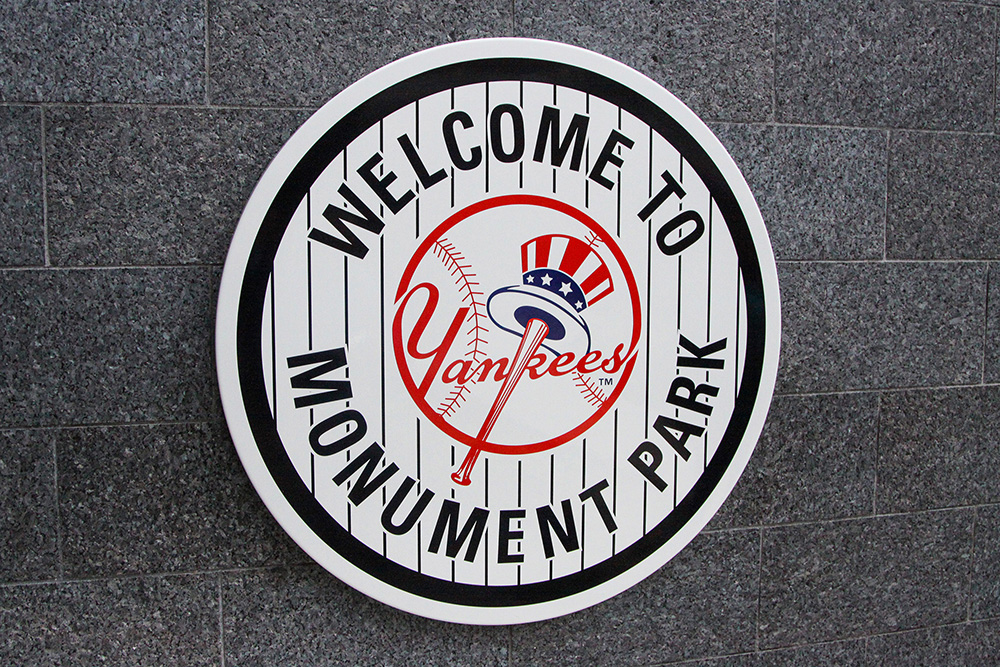 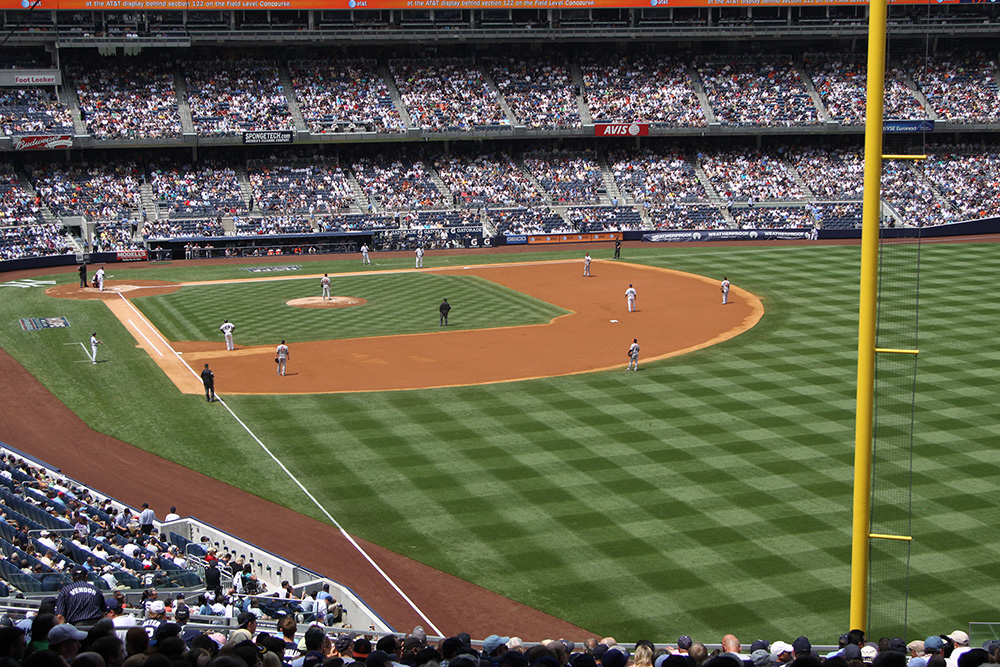 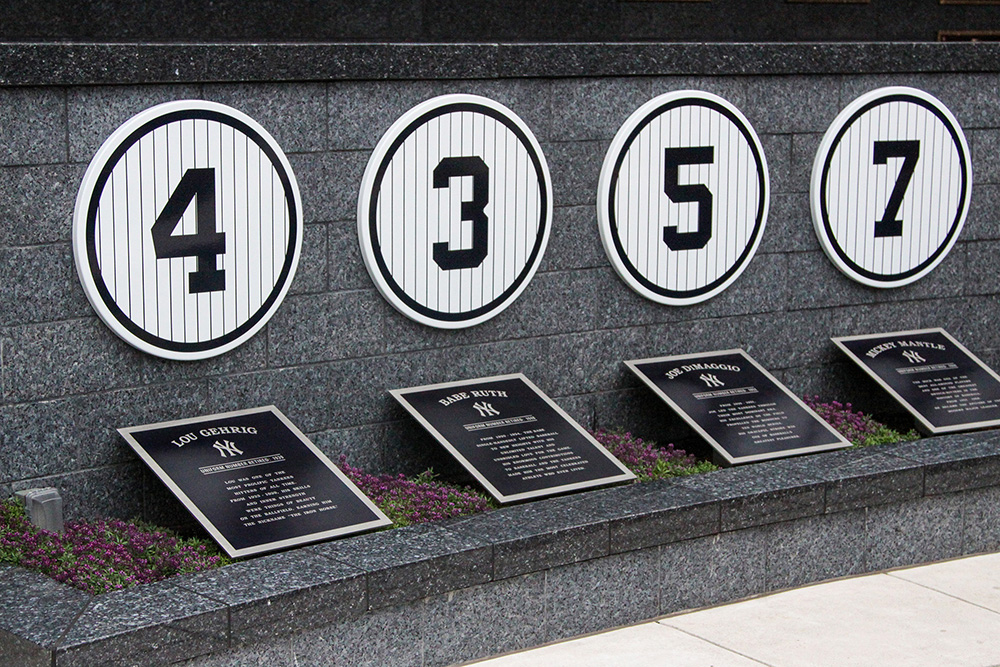 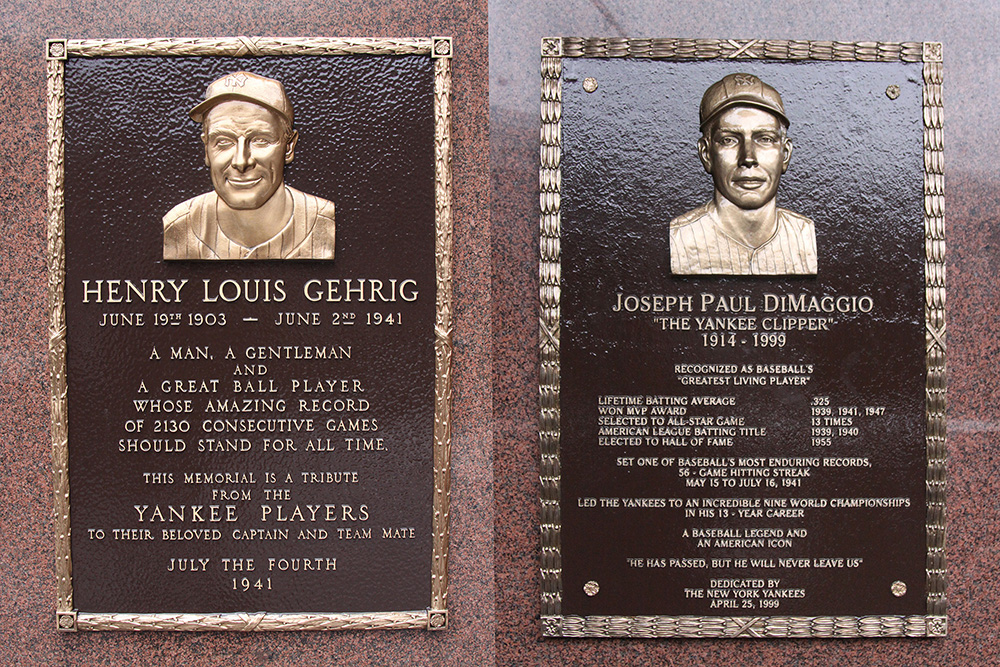 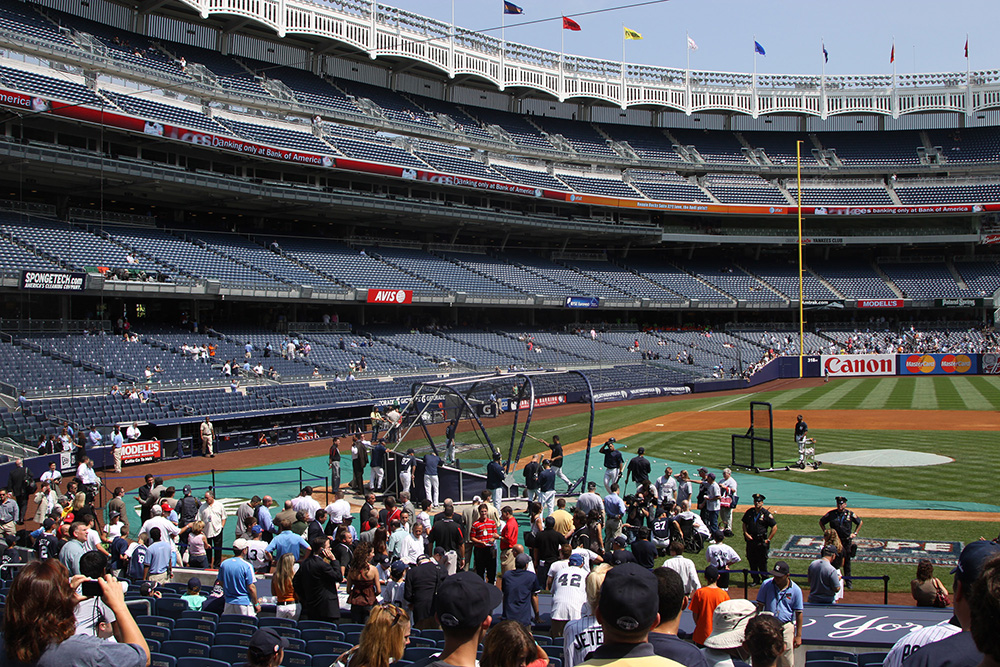 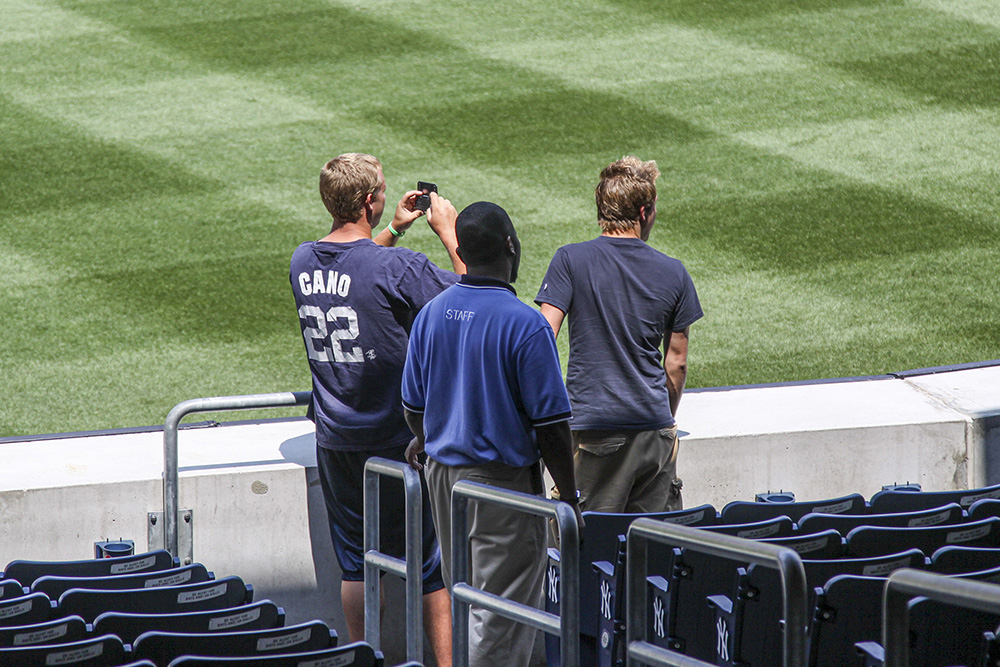 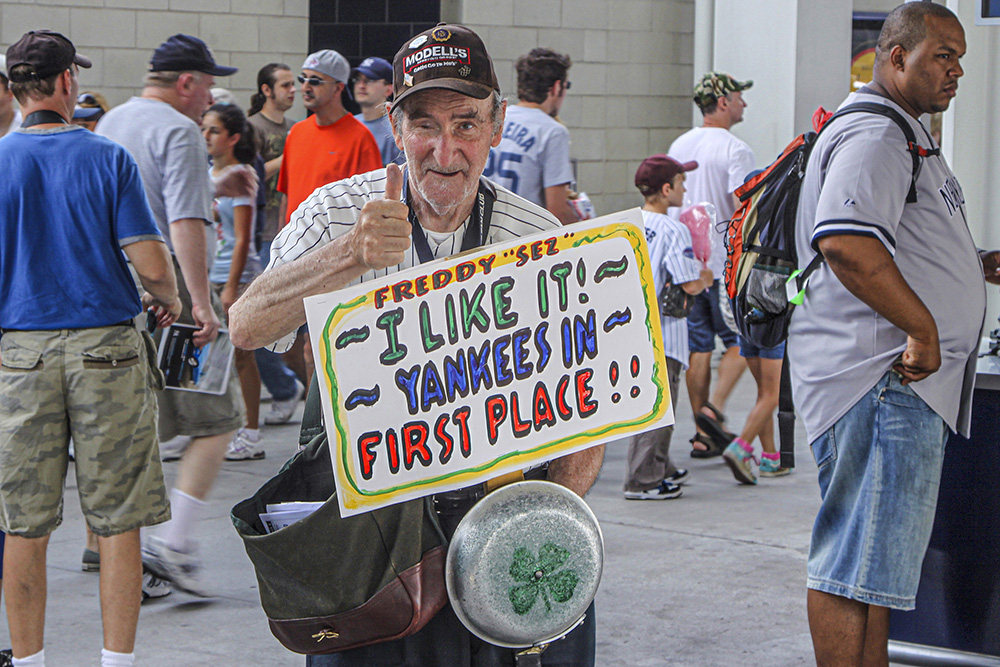 Ballpark: B - The decorative frieze with pennants like the old stadium and how they honor history is great. You can see the field from all section concourses, except behind home plate where there’s a Wizard of Oz curtain blocking the view of the field.

Fans & Atmosphere: B - Feels corporate with lots of ads and no place to sit and eat like at Citi Field, Citizens Bank, Nationals Park, and Fenway Park. Outfield areas are great places to enjoy games because of bars. $25.00 a ticket in the Grandstand behind home plate in upper level.

Food: B - Garlic french fries. Did I mention the Garlic French Fries? Cheese Steak is great. Water and lemonade in a cup with no lid. $33.00 for all food purchased.

Mascot: INC - We don't need no stinking mascot. We have 26 rings!

Staff: F - Impolite, poorly trained, asked two staff members who walked around with a sign "ask me a question if you need help?" They didn't know the answer. Security staff are not too swift. Concessions people were unpleasant.

Team Tradition: A - Yankee Pride is everywhere. Very well done in the Great Hall, museum, and in the food court with photos of past Yankee players eating. This is where Citi Field and Mets lose out.

Location: B - The new ballpark was constructed across the street of the 1923 Yankee Stadium, on the former site of Macombs Dam Park. A quick subway ride from midtown Manhattan, limited parking and plenty of traffic.