At the left-center field concourse there are statues of all of the players whose numbers have been retired by the Tigers (with the exception of Jackie Robinson, whose number was retired in every MLB park in 1997 and is located on the wall in right-center field).

A statue of Ty Cobb is also there, but he does not have a number, as he played baseball before players began to wear numbers on their uniforms. These players' names, along with the names of Hall of Fame players and broadcasters who spent a significant part of their career with the Tigers, are also on a wall in right-center field.

Ernie Harwell, the team's long time radio announcer and a recipient of the Hall of Fame's Ford C. Frick Award, has a statue just inside the stadium on the first base side.

Comerica Park is currently the only ballpark in the Major Leagues to feature a distinctive dirt strip between home plate and the pitcher's mound. This strip, sometimes known as the "keyhole", was common in early ballparks, but it's very rare in modern facilities.Additionally, the home plate area is in the shape of the home plate itself, and not as a standard circle.

The flagpole located between center and left fields was originally in play, as was the flagpole in Tiger Stadium. However, the left field wall was moved in front of the pole before the 2003 season. A ball that hits the pole is now ruled a home run.

Detroit Tigers' starting pitcher Justin Verlander (35) follows through on a pitch during the first inning of a baseball game against the New York Mets at Comerica Park on June 30, 2011 in Detroit Michigan. (Photo: Gordon Donovan) 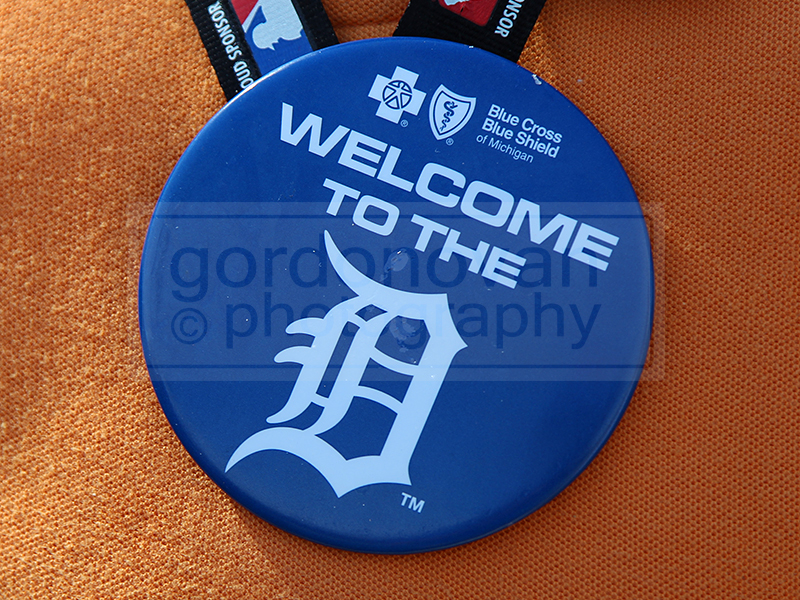 The ushers, many of whom used to work at Tiger Stadium, are friendly - even to fans wearing Mets gear, like myself. Several ushers suggested other attractions in the area to see and thanked me for coming. (Photo: Gordon Donovan) 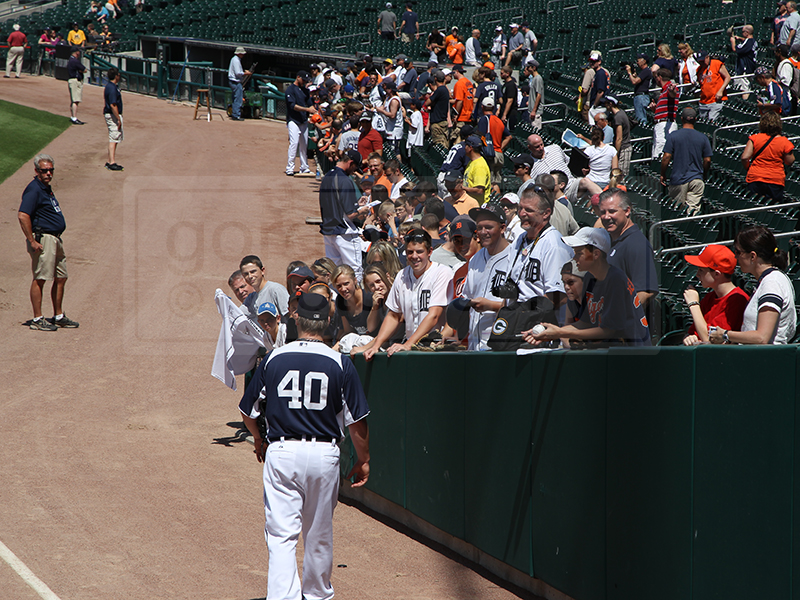 Fans stand along the outfield walls seeking autographs from players. Crowds gather about two hours before game time. Cabrera, Ordonez and Verlander seem to be fan favorites as many fans wore their names and numbers on shirts and jerseys. (Photo: Gordon Donovan) 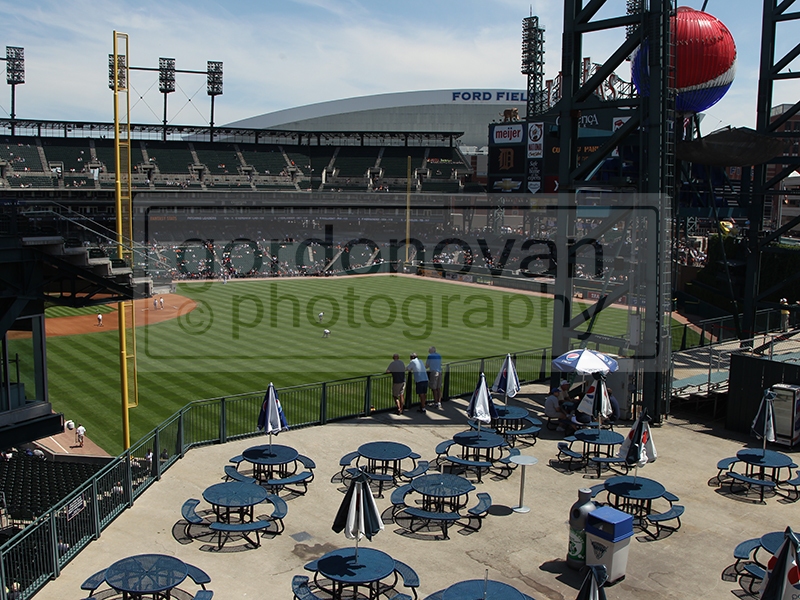 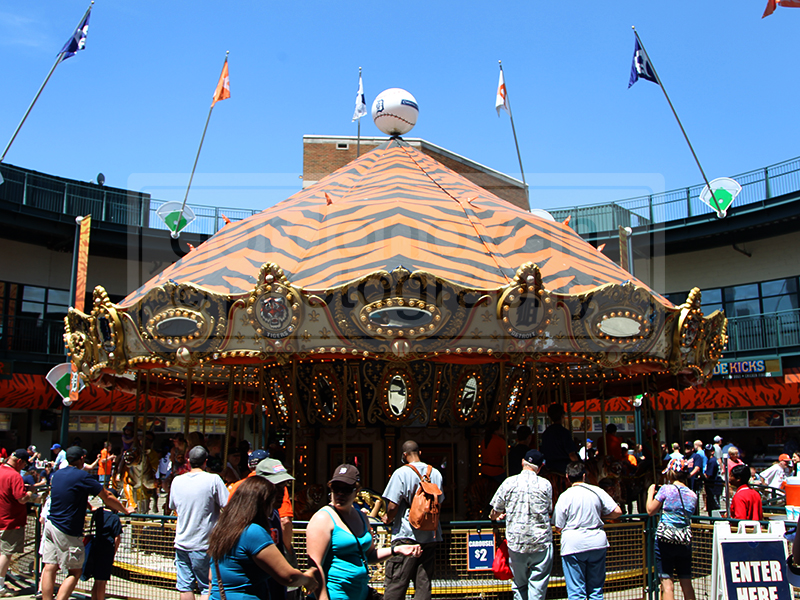 In the middle of the food court, a merry-go-round is available for the young and young-at-heart, with patrons riding atop tigers instead of horses. (Photo: Gordon Donovan) 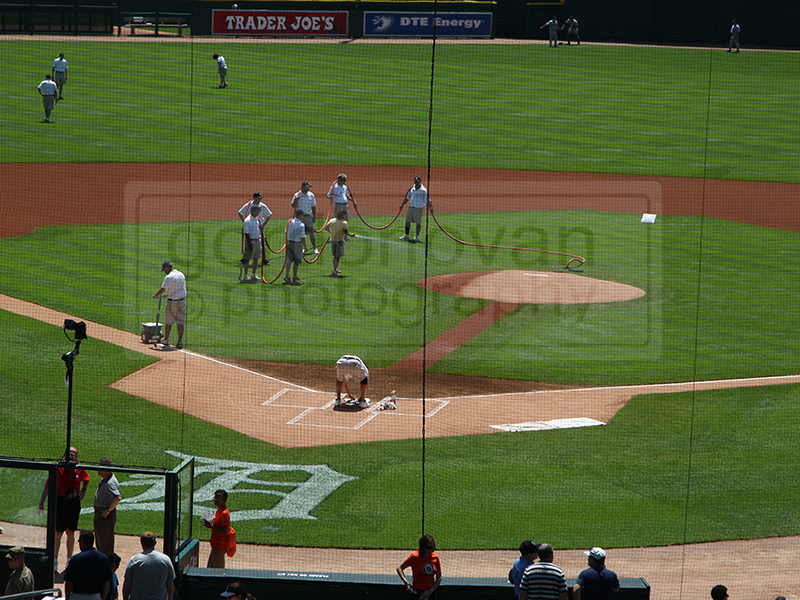 The Tigers' grounds crew prepares the field prior to the start of the game. The cut grass surrounding the home plate is shaped like a home plate. Comerica is one of two parks with a throwback dirt path between the pitcher's mound and home plate. (Photo: Gordon Donovan) 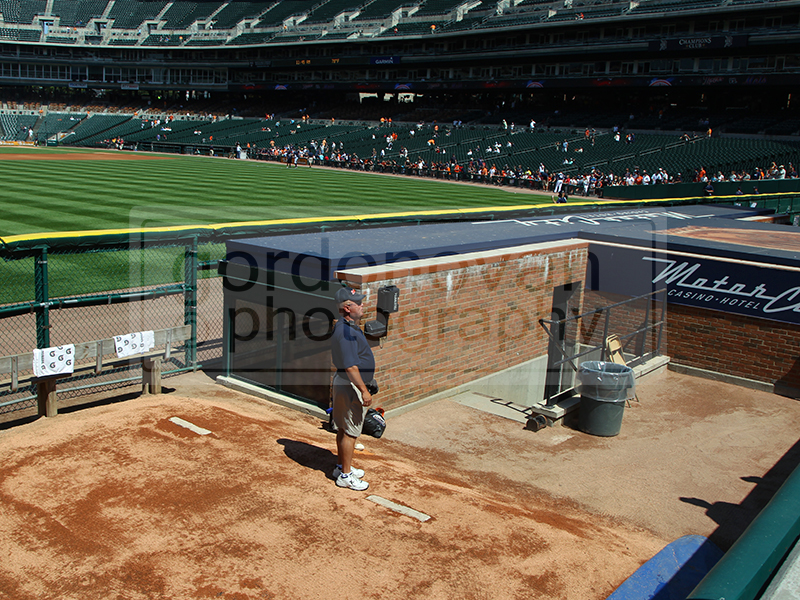 Before the 2003 season, the club moved the distance from left-center field from 395 to 370 feet. The bullpens were moved from right field to an empty area in left field created when the fence was moved in. The team removed the flagpole from the field of play, originally incorporated as an homage to Tiger Stadium. (Photo: Gordon Donovan)

The wide concourses are filled with food and merchandise vendors. Food choices include traditional ballpark fare as well as several restaurants that include Little Caesars, Big Cat Court, the Brushfire Grill and the Labatt Blue Light Grill. (Photo: Gordon Donovan) 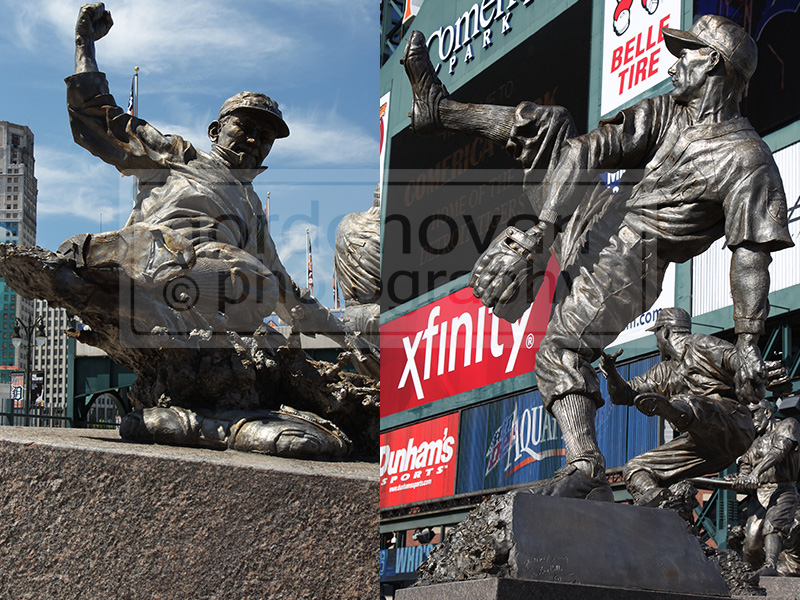 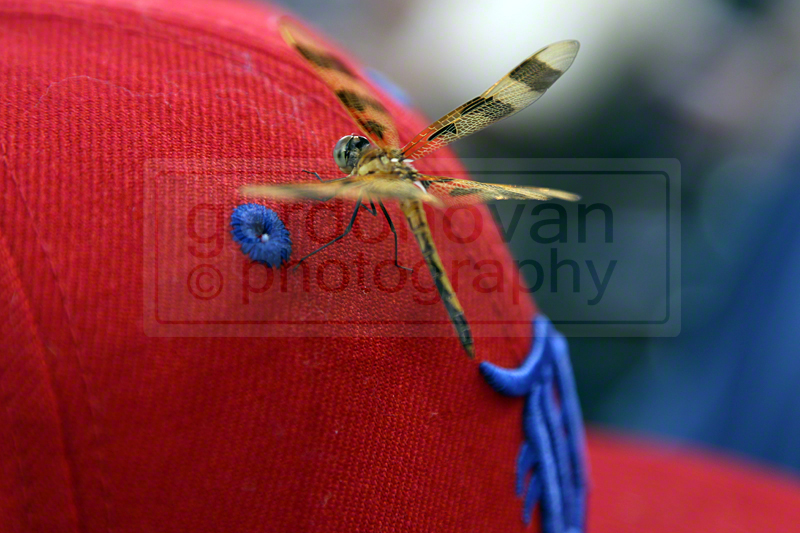 Some cities have gnats that attack players of the opposition; here a dragon fly sits on top of a Tigers' fan cap. Many dragon flies visited the ballpark after dark and found refuge under the bright lights of the ballpark. (Photo: Gordon Donovan) 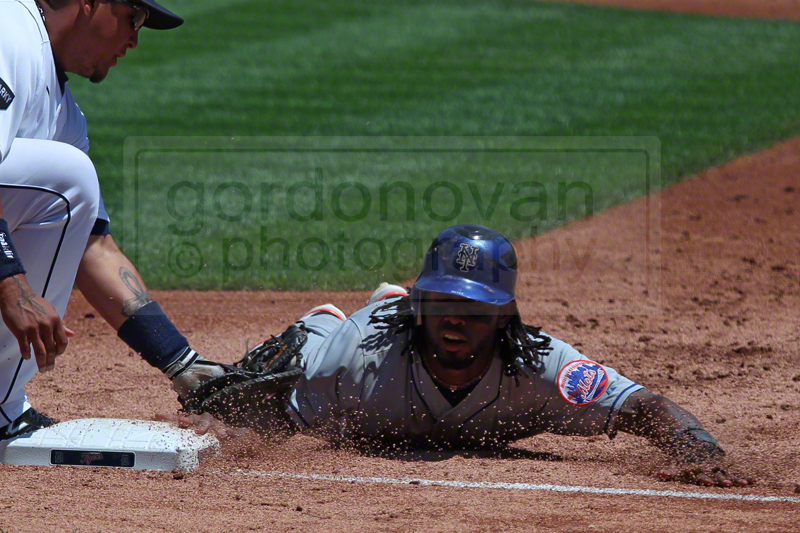 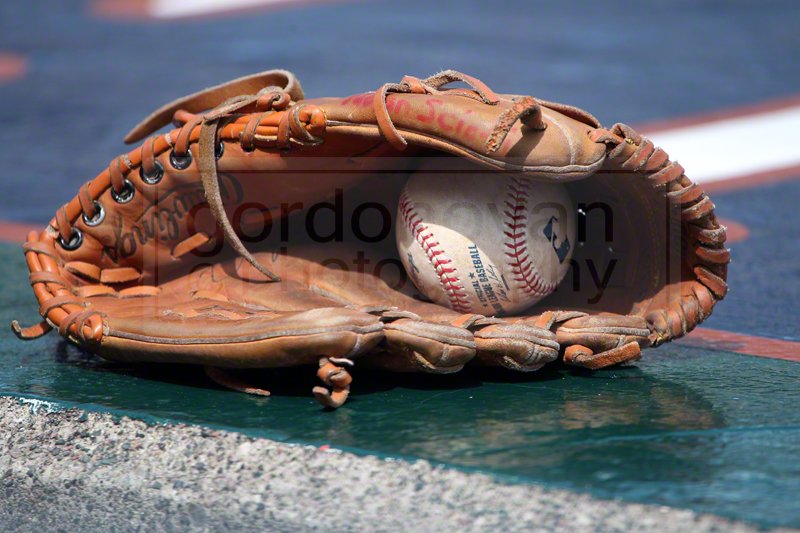 A ball and glove sit on top of the visitors dugout at Comerica Park. (Photo: Gordon Donovan) 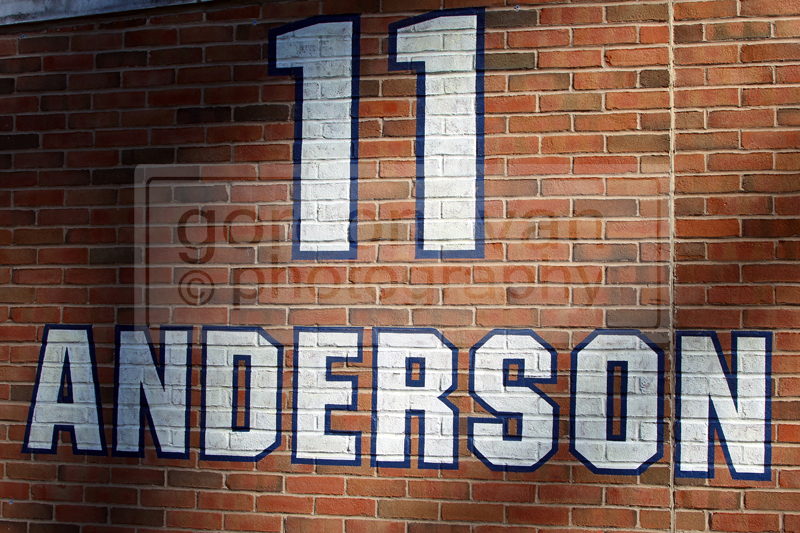 Names and numbers are painted on the brick walls on both sides of the ivy-covered batters eye in center field. The most recent addition to Comerica was former manager Sparky Anderson. (Photo: Gordon Donovan) 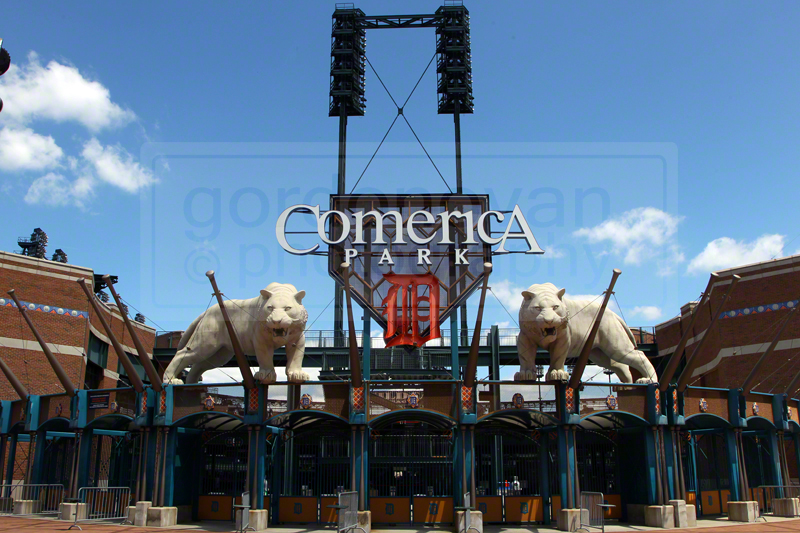 There are three main gated entrances to Comerica Park, each featuring attractions on a grand scale. Among the features are 80-foot high baseball bats framing the gates, tiger sculptures, and Pewabic tile accents. (Photo: Gordon Donovan) 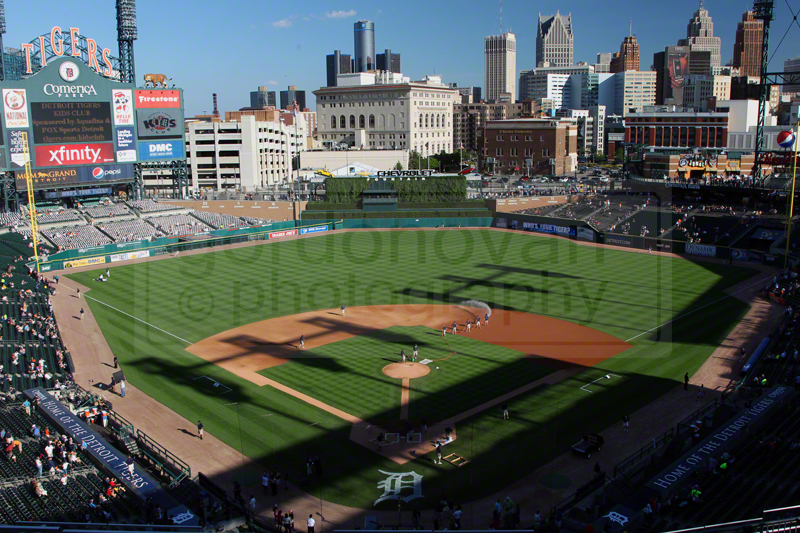 With no upper deck outfield seats, no ballpark offers a better view of a downtown skyline than Comerica Park. (Photo: Gordon Donovan)

Comerica Park features a main scoreboard that is one of the largest in baseball. The ballpark now seats 41,782 fans and, with standing room, at least 45,010. (Photo: Gordon Donovan) 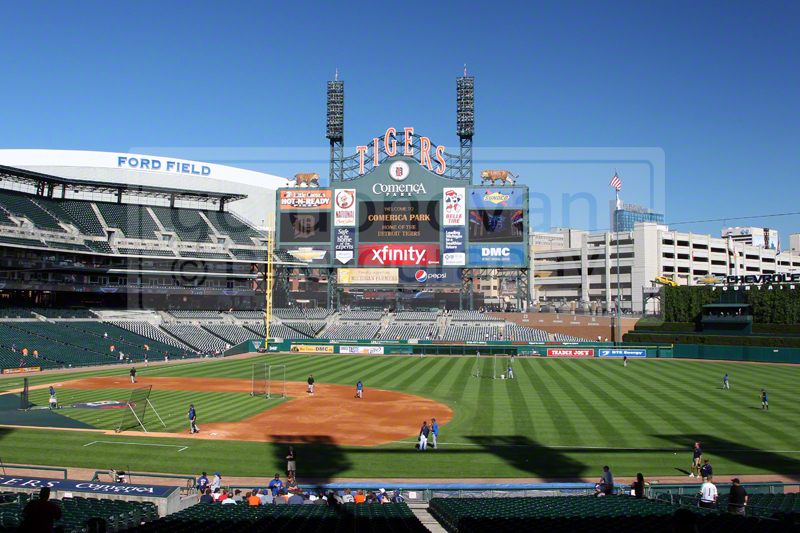 There are approximately 23,000 seats in the lower bowl of Comerica Park and 2,000 in the two suite levels. There are roughly 11,000 in the main upper deck. (Photo: Gordon Donovan)

Ballpark: A - Great views of field and downtown Detroit from any seat. No tours available for visitors while the team is in town.
Fans & Atmosphere: B - Sat with fans over two games that were not the most knowledgeable baseball fans, felt embarrassed for them. A few Detroit residents only root for the Red Wings.
Food: B - Food choices include traditional ballpark fare as well as several restaurants that include Little Caesars, Big Cat Court, the Brushfire Grill and the Labatt Blue Light Grill.
Mascot: B - Paws, he's cute but not that exciting. He could have been having an off-day.
Staff: A - Friendly staff, several members came over and asked if I was visiting from out of town. Loved seeing retired people working at the park as fan friendly ambassadors dressed in older Tiger uniforms.
Team Tradition: A - Beautiful monuments and names and numbers of former stars fill outfield. No Hall of Fame but a great walk of fame displaying teams history adding a touch of Detroit industry.
Location: A - Downtown Detroit. It's safe walking with a group at night, but don't go past the expressway a block away.