Petco Park is an open-air ballpark in downtown San Diego, California. It opened in 2004, replacing Qualcomm Stadium as the home park of Major League Baseball's San Diego Padres. Petco Park is named after the pet supplies retailer Petco, which is based in San Diego and paid for the naming rights.

Petco Park differentiates itself from many other Major League ballparks built in the same era by eschewing "retro"-style red brick and green seats. The stadium is clad in Indian sandstone and stucco; its exposed steel is painted white and the 41,164 fixed seats are dark blue. The design is meant to evoke the sandy color of San Diego cliffs and beaches, the blue of the ocean, and the white sails of boats on the nearby bay.

The official address of Petco Park is 19 Tony Gwynn Way, in honor of the eight-time National League batting champion who wore that uniform number during his entire major league career with the Padres. A 10-foot (3.0 m) statue of Gwynn was unveiled on the stadium grounds on July 21, 2007.

The "Park at the Park," a grassy berm sloping above the outfield fence, is open during game time, allowing fans to sit and watch games for $10.[28] When no games are being played, the Park at the Park serves as a free local park for area residents.

The Western Metal Supply Co. building, a hundred-year old brick structure that had been scheduled for demolition to make way for Petco Park, was saved and incorporated into the design of the ballpark.

The building was renovated and contains the team store, private suites, a restaurant and rooftop seating. The southeast corner of the building serves as the left field foul pole, and is protected by a strip of bright yellow angle iron. 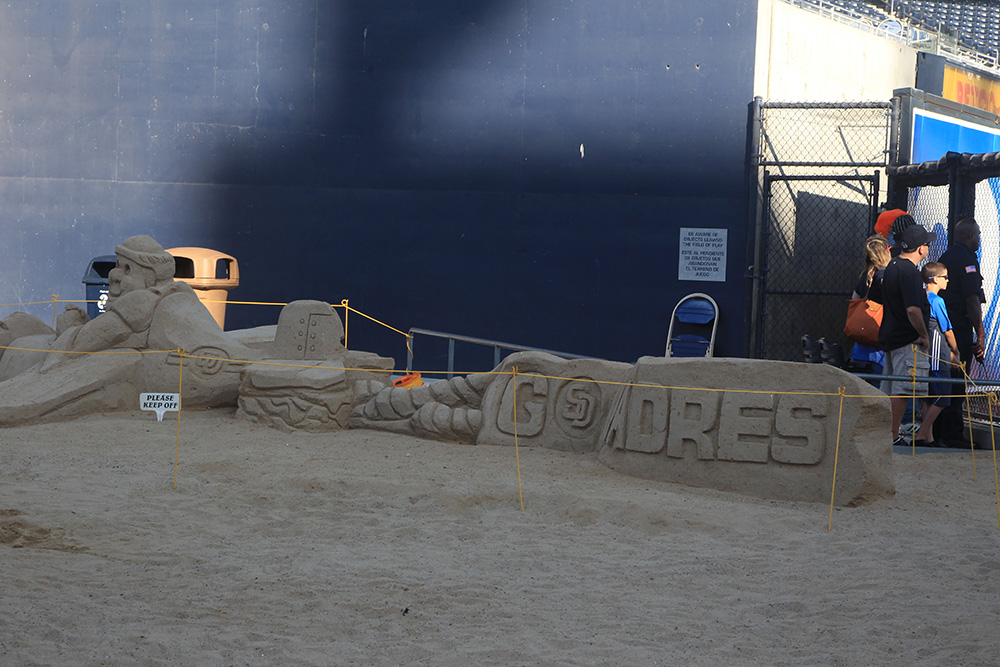 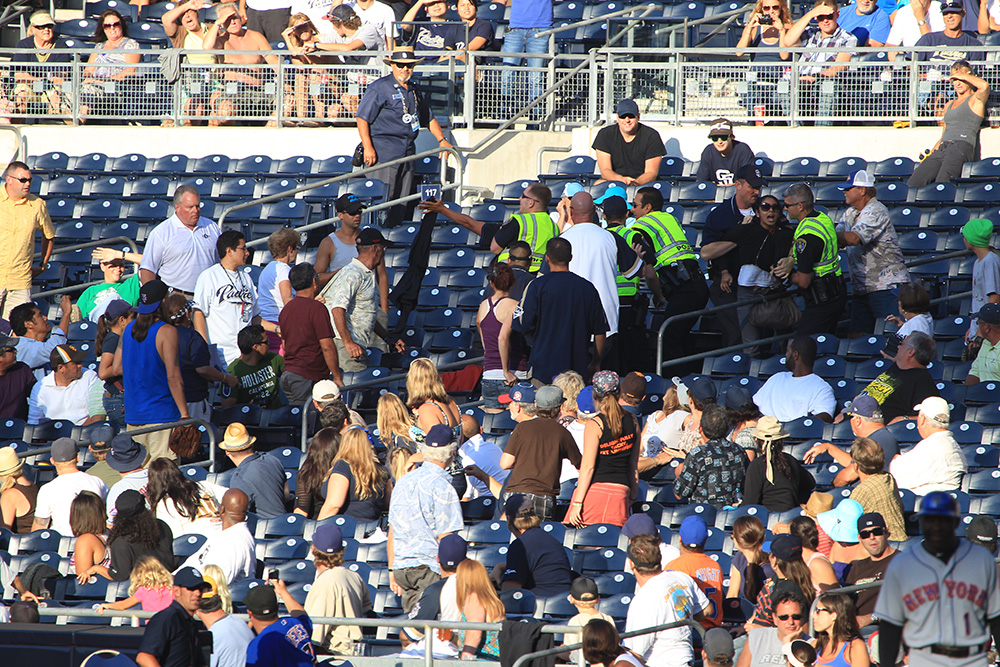 Security drags out a few unruly fans during a baseball game between the New York Mets and San Diego Padres at Petco Park. (Photo: Gordon Donovan) 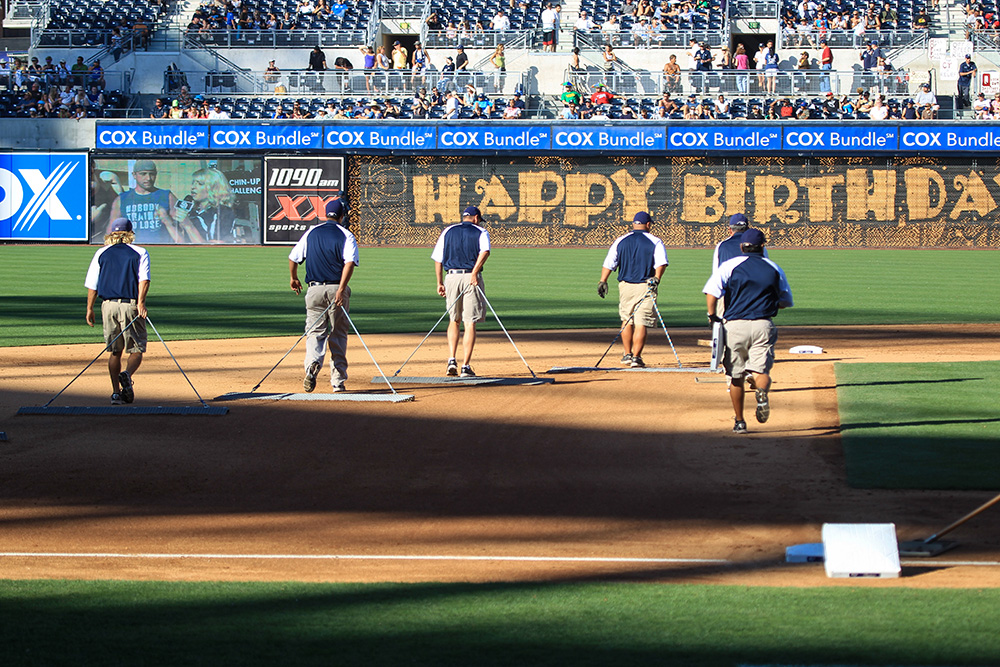 San Diego Padres' grounds crew drags the field during the fourth inning of a baseball game against the New York Mets at Petco Park on August 17, 2011 in San Diego, California. (Photo: Gordon Donovan) 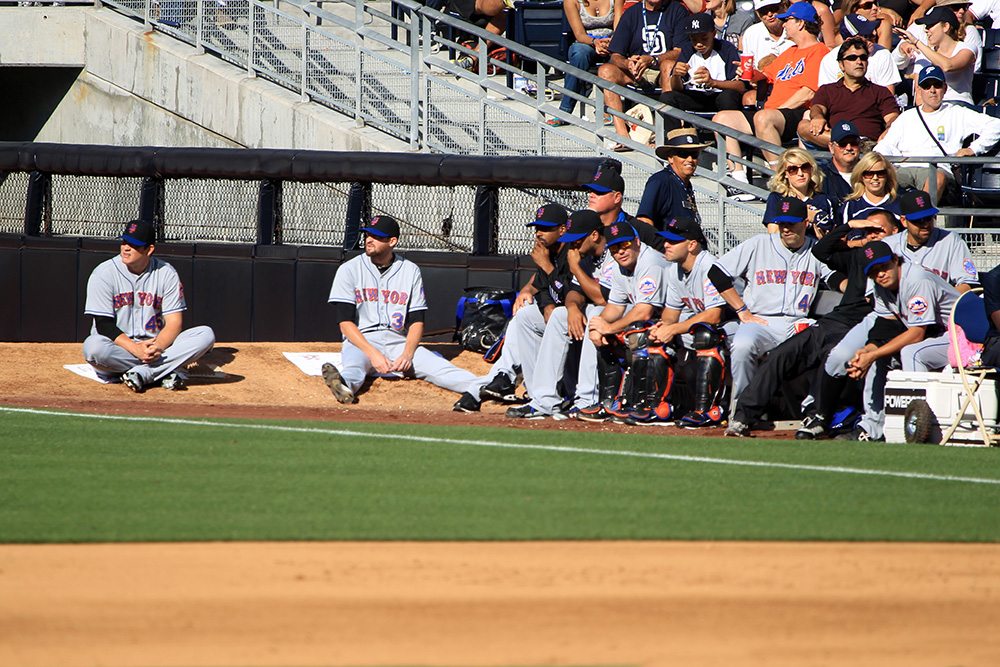 Strange thing here: the visitors bullpen is along the home team's side of the field, while the Padres bullpen is in left field. (Photo: Gordon Donovan) 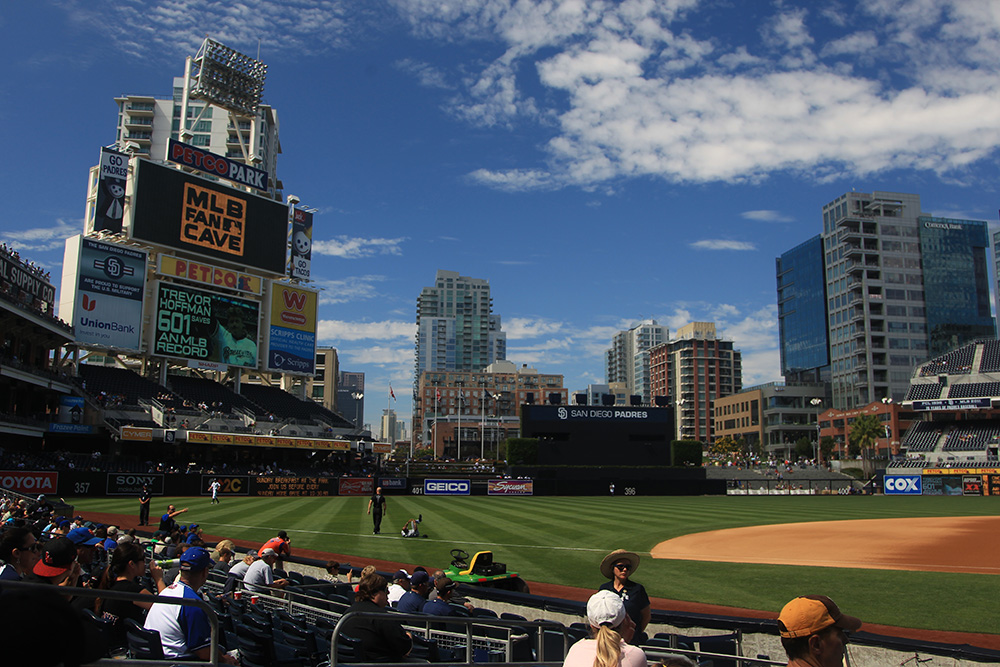 The scoreboard in left field and the signature feature of Petco: the Western Metal Supply Co. Building. Built in 1909 at a cost of $60,000, the building hosts the team store and private party suites available for rent on a game-by-game basis. The fourth floor hosts the Padres Hall of Fame Bar & Grill. (Photo: Gordon Donovan) 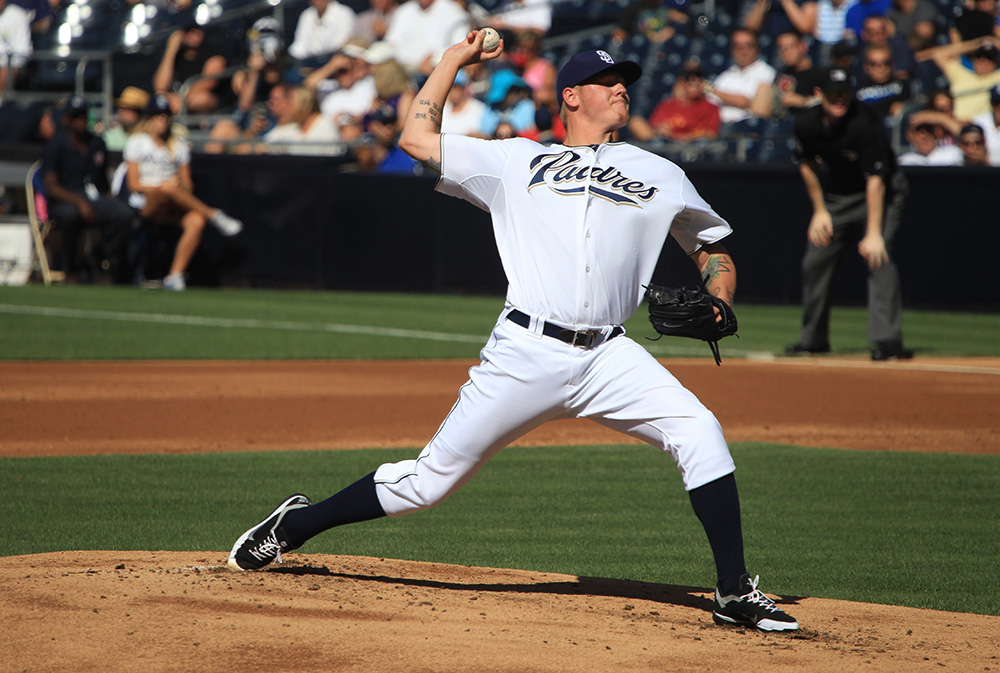 San Diego Padres' starting pitcher Mat Latos (38) follows through on a pitch during the first inning of a baseball game against the New York Mets at Petco Park on August 17, 2011 in San Diego, California. (Photo: Gordon Donovan) 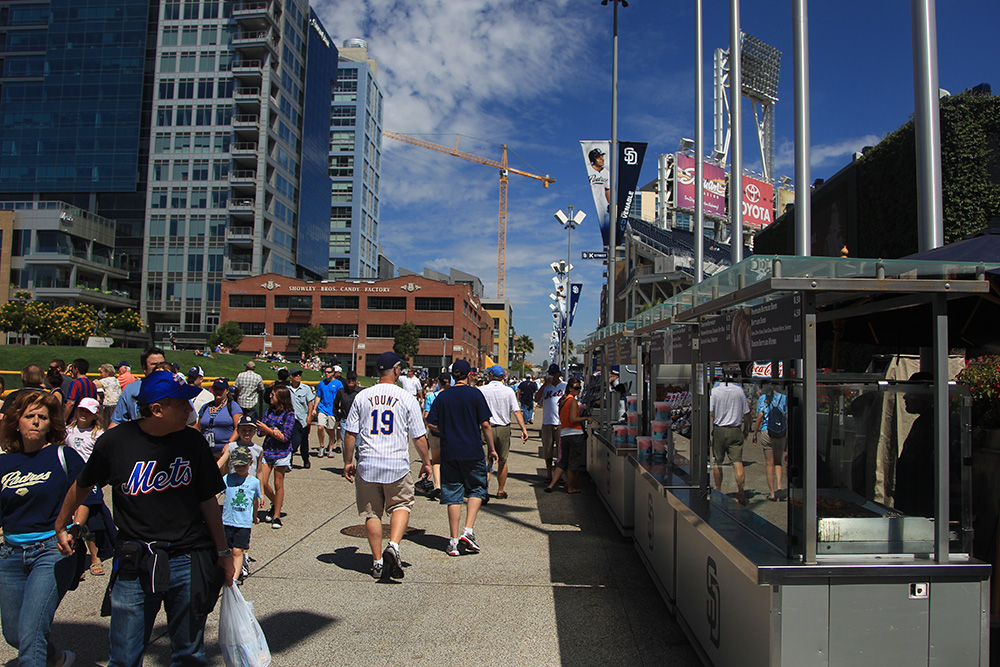 Fans walk through the concourse in the "Park at the Park," a grassy berm sloping above the outfield fence at Petco Park. (Photo: Gordon Donovan) 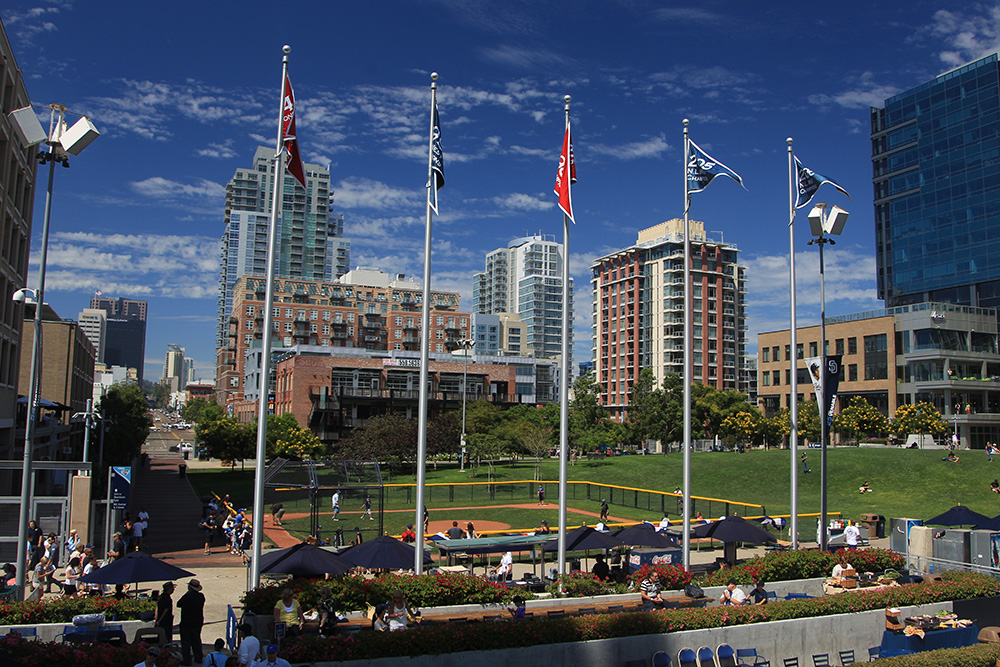 Downtown San Diego is just beyond the "Park in the Park" in the outfield. (Photo: Gordon Donovan) 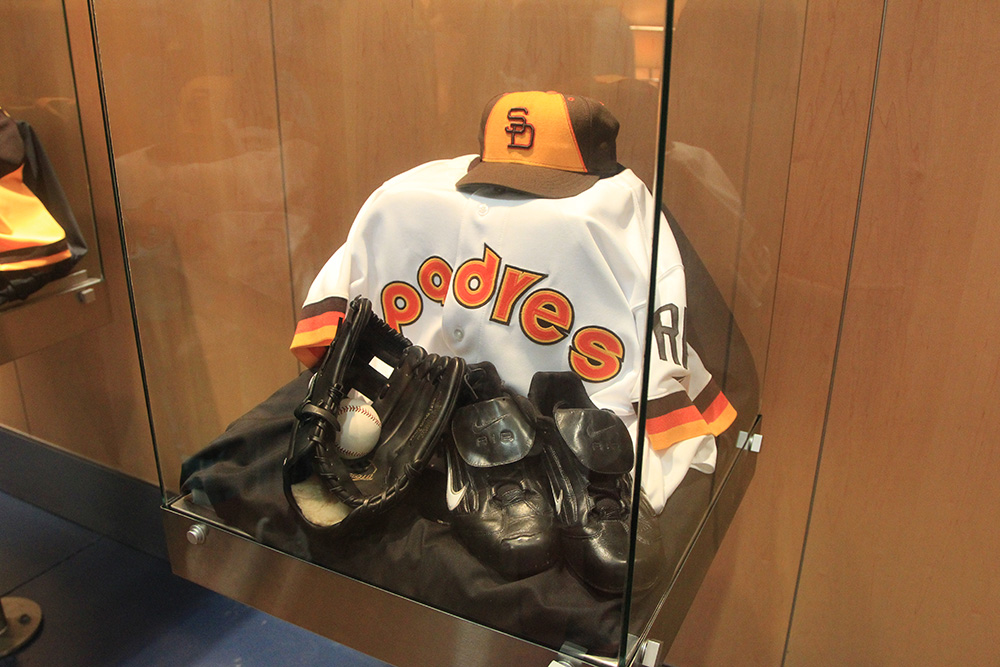 The VIP entrance is decorated with Padres' uniforms of the past in display cases. These are some of the ugliest uniforms you'll ever see. The Pacific Coast League (PCL) club is decorated with vintage PCL memorabilia including team uniforms. (Photo: Gordon Donovan) 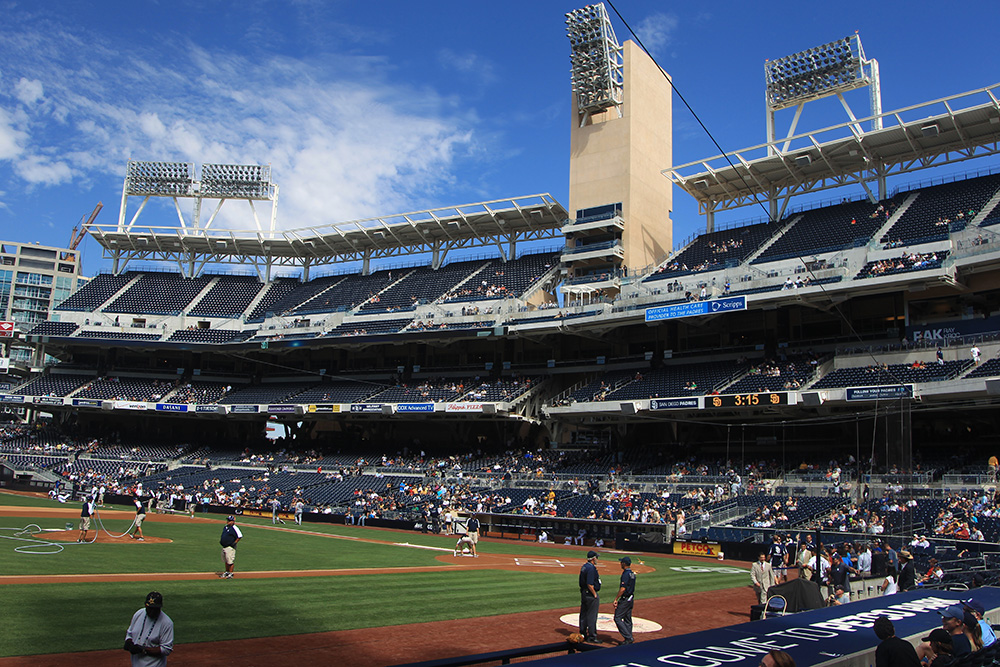 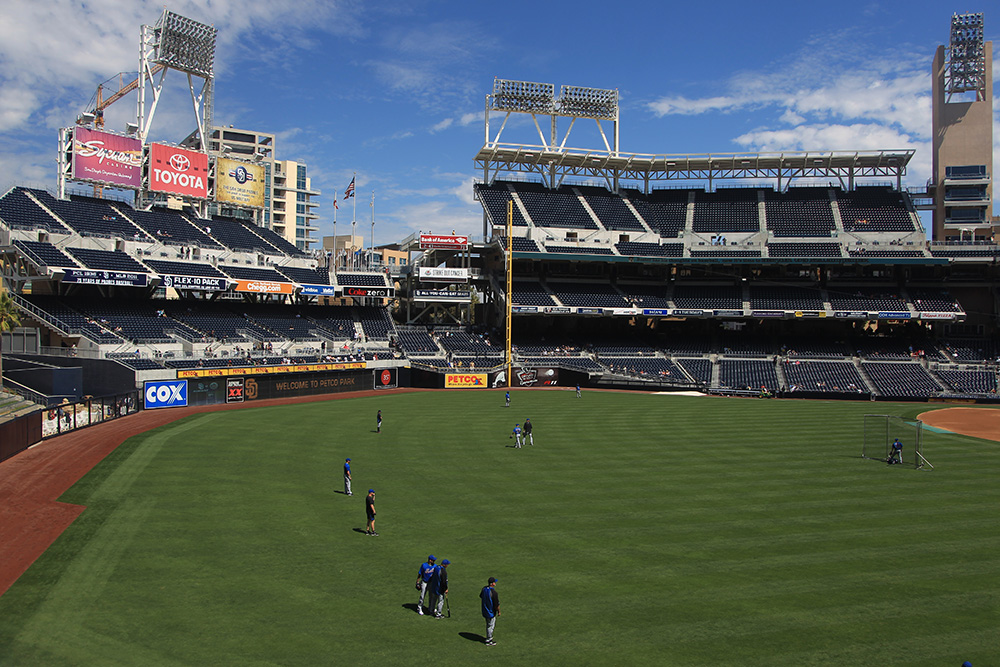 The New York Mets take batting practice before the baseball game against the Padres at Petco Park in San Diego. (Photo: Gordon Donovan) 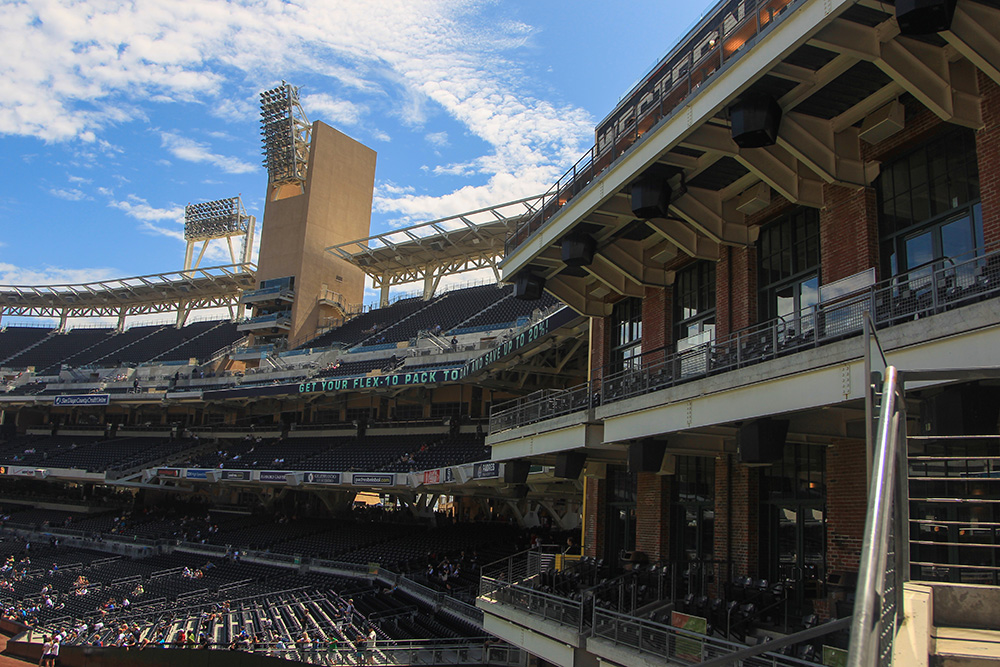 A view of the Western Metal Supply Co. building seats from at Petco Park at San Diego. (Photo: Gordon Donovan) 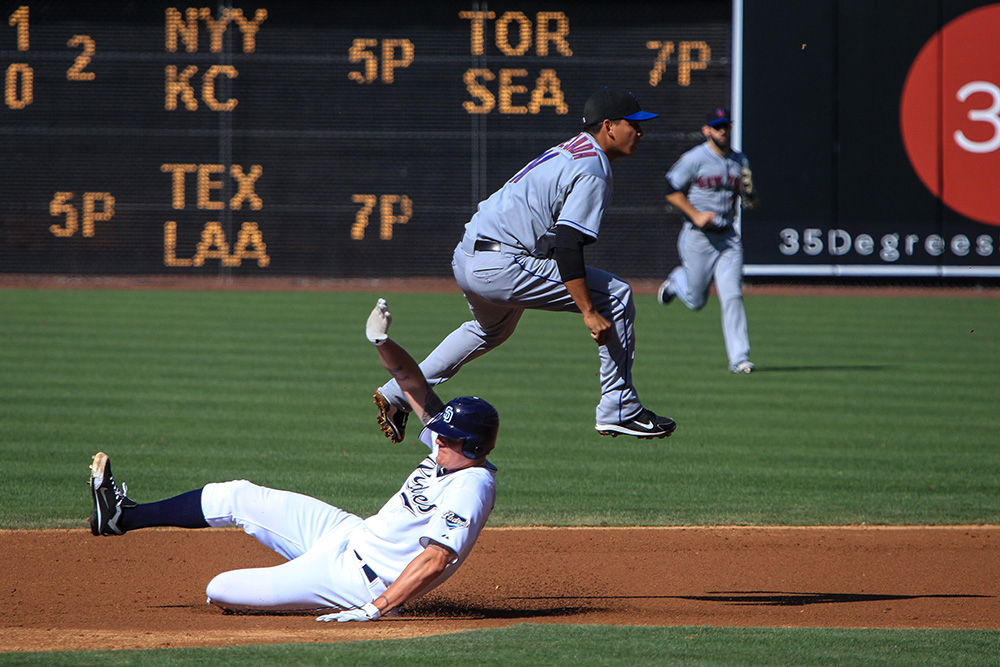 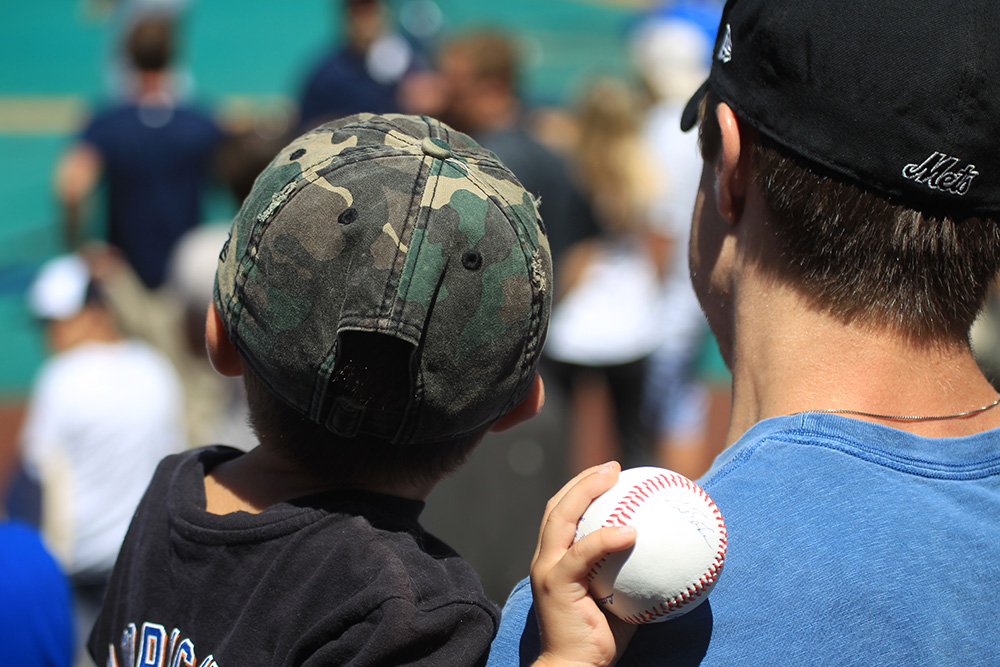 A young fan holds a ball as dad and he seeks autographs from players before the game. (Photo: Gordon Donovan) 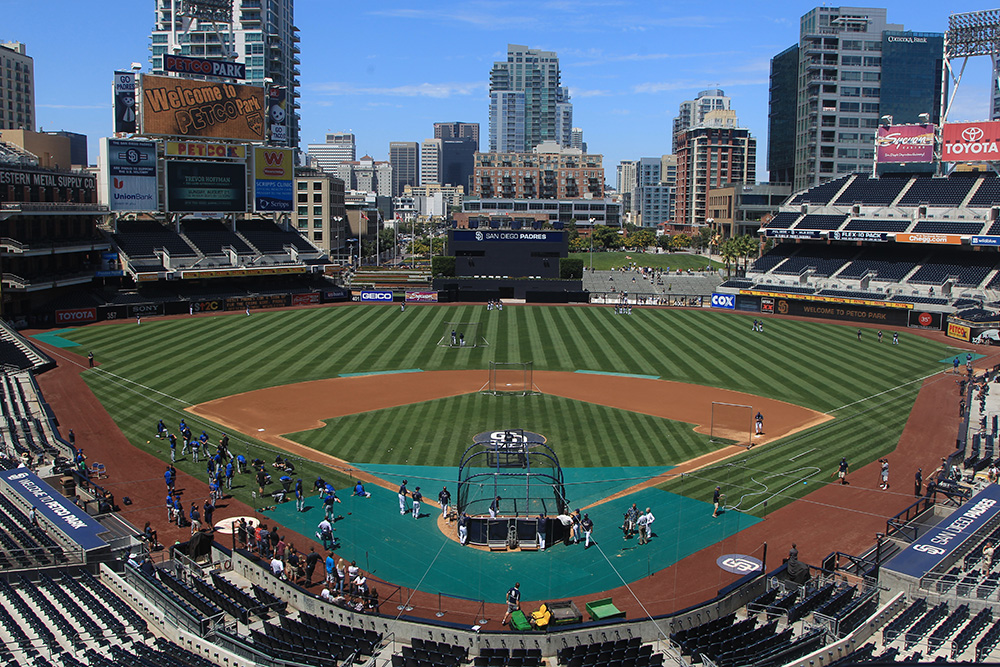 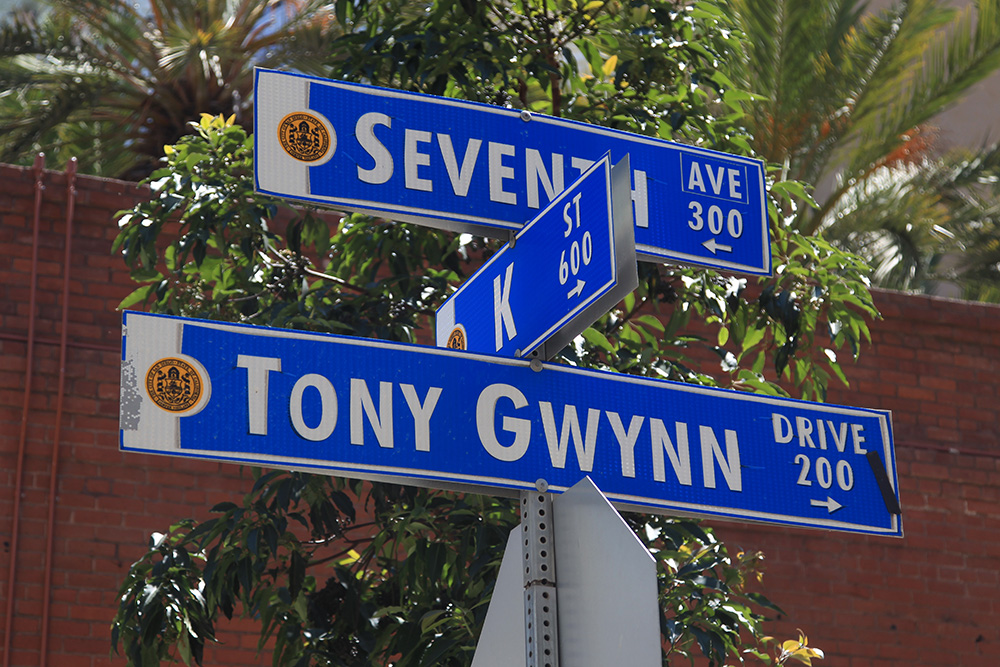 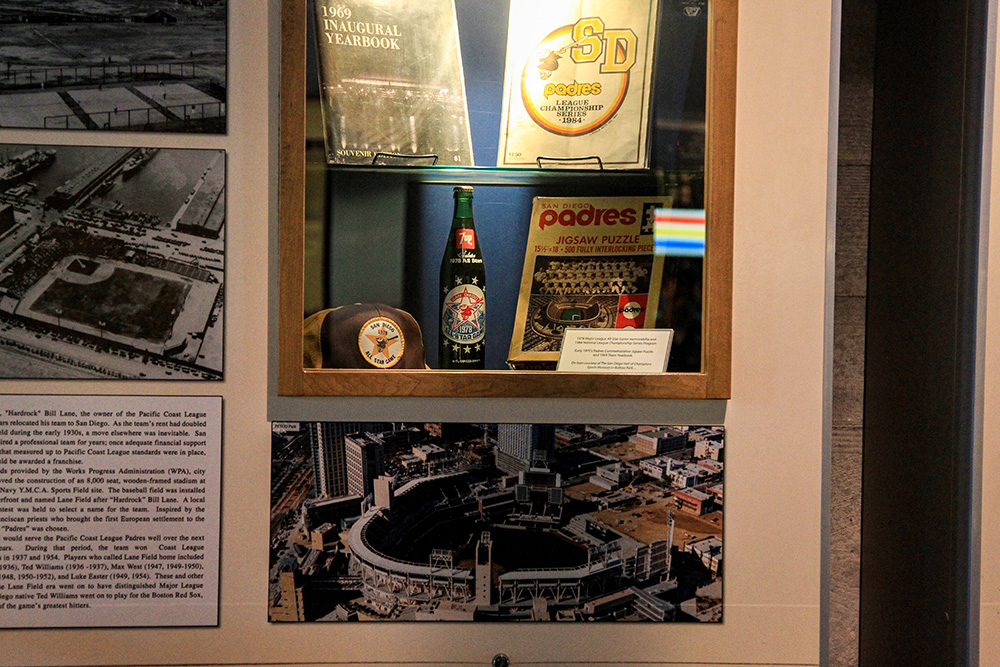 One of the display cases in one of the concourses in Petco Park honoring the team's history. (Photo: Gordon Donovan) 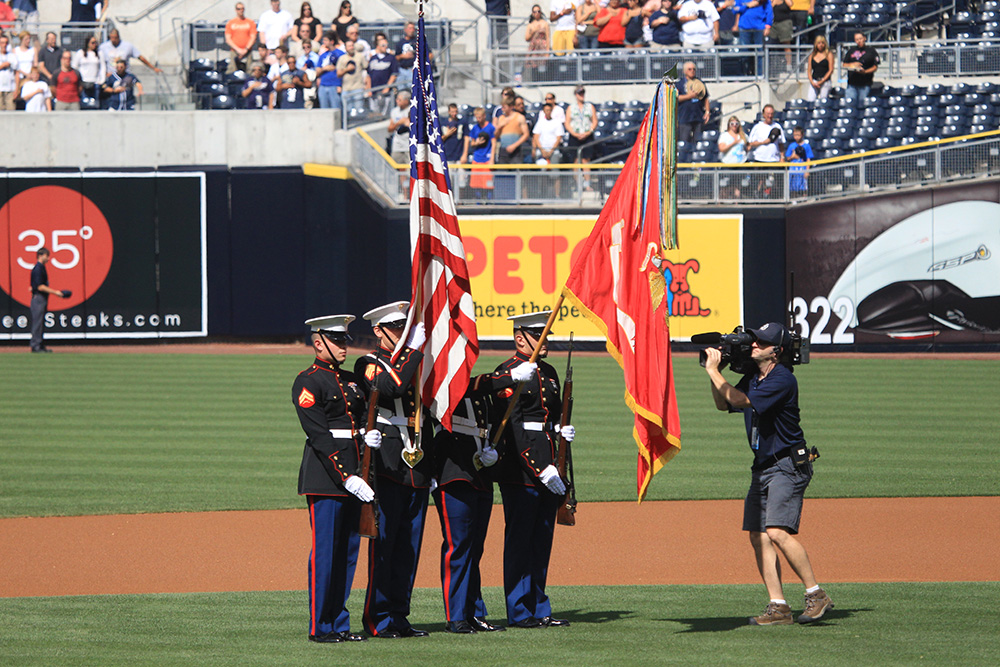 The honor guard presents colors before the start of the game. The team and fans acknowledge all veterans in attendance before the game after the national anthem. (Photo: Gordon Donovan) 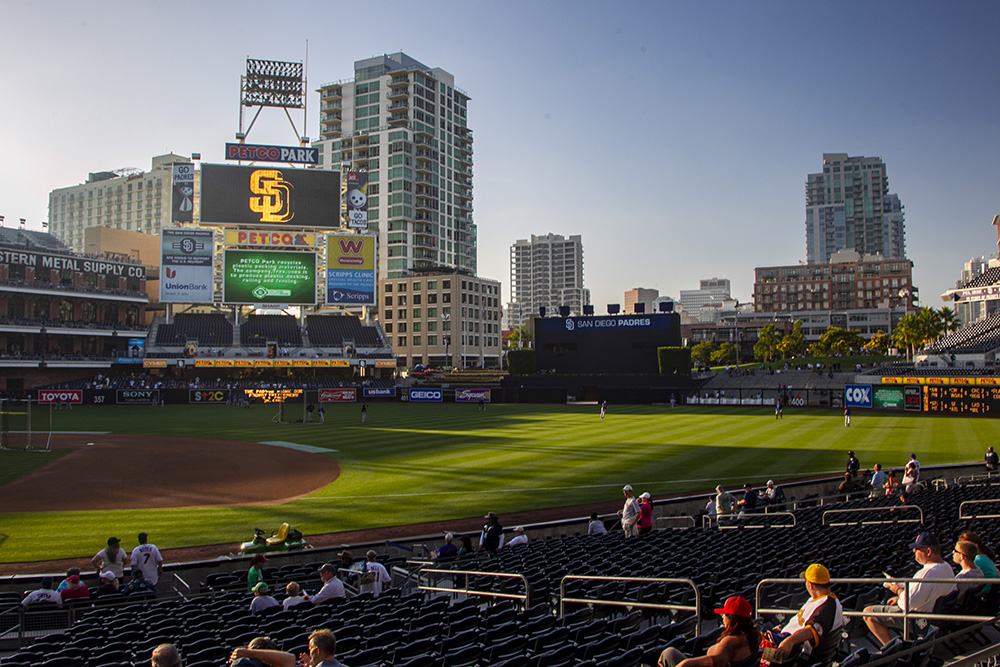 A view of the seats along the first base line looking towards left field before the baseball game between the New York Mets and San Diego Padres at Petco Park. (Photo: Gordon Donovan) 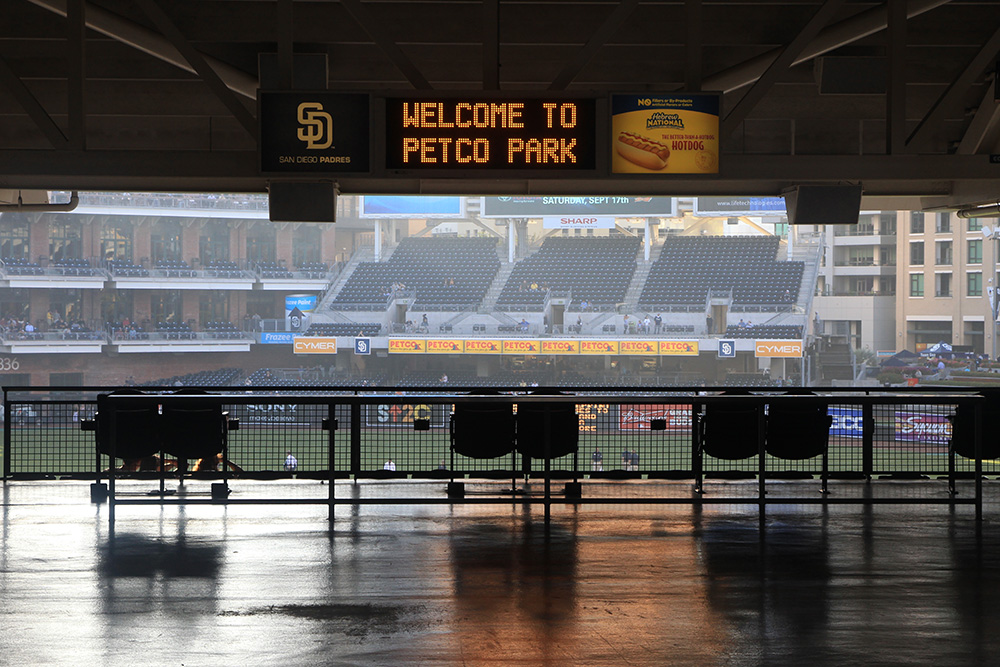 Concourses are spacious, open and airy. Signature towers and terraces offer panoramic views of the bay, the downtown skyline, Balboa Park and the mountains on the horizon. (Photo: Gordon Donovan) 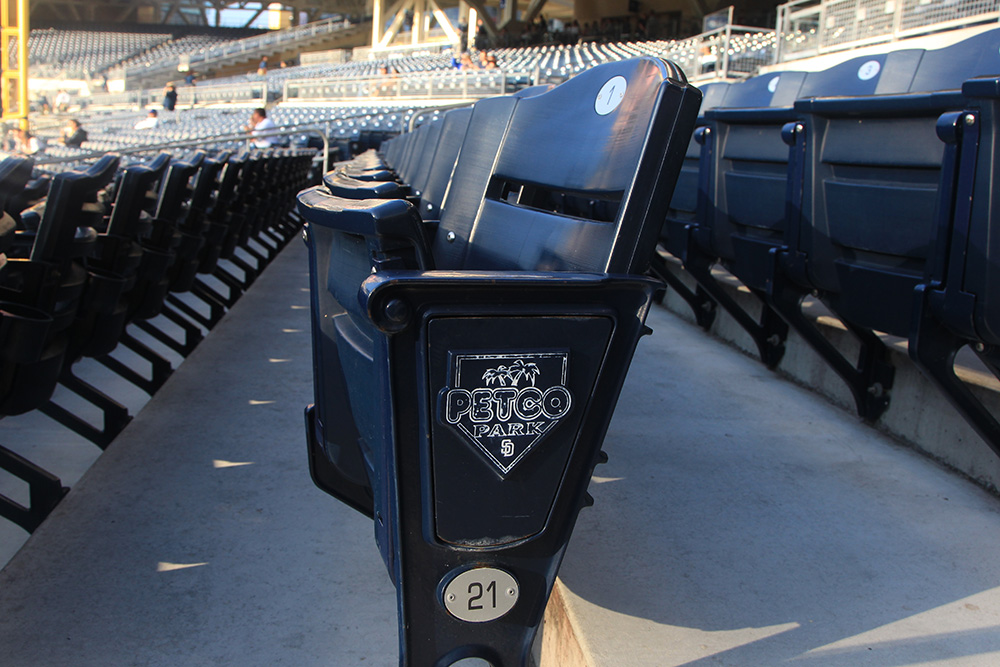 The Petco Park logo adorns the sides of field level seats. The tour of the ballpark was not very good since it did not go on the playing field or press areas. The tour leader seemed anxious to get the tour over quickly. I learned more about park speaking to ushers. (Photo: Gordon Donovan) 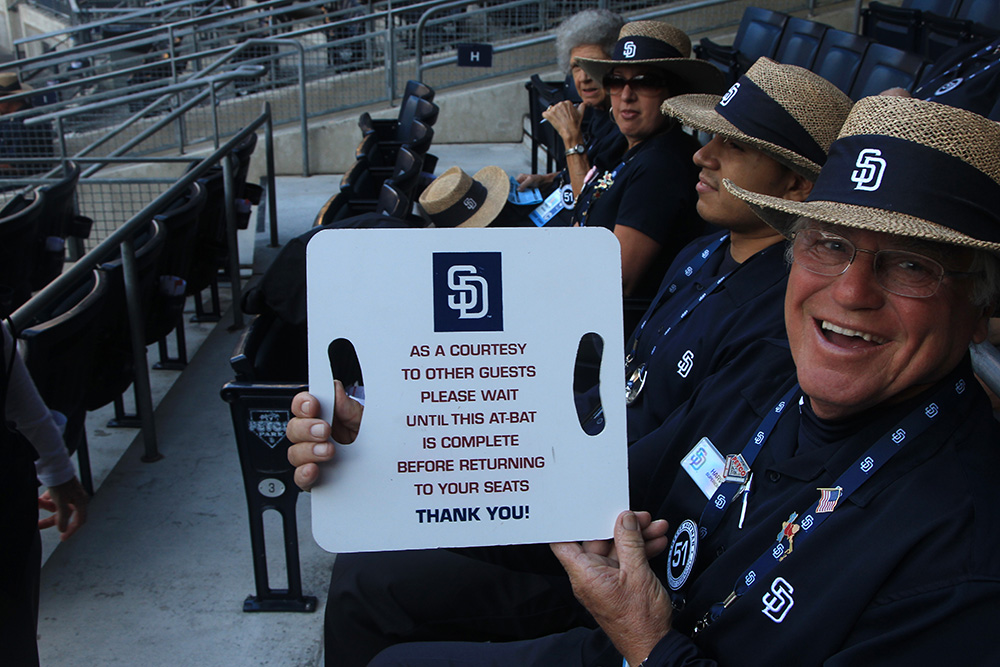 As a courtesy to others, guests are asked to refrain from walking in aisles during player at-bats from the top of the second inning until the conclusion of the game. Guest Services representatives are provided with handheld signs to remind guests to observe this policy. (Photo: Gordon Donovan) 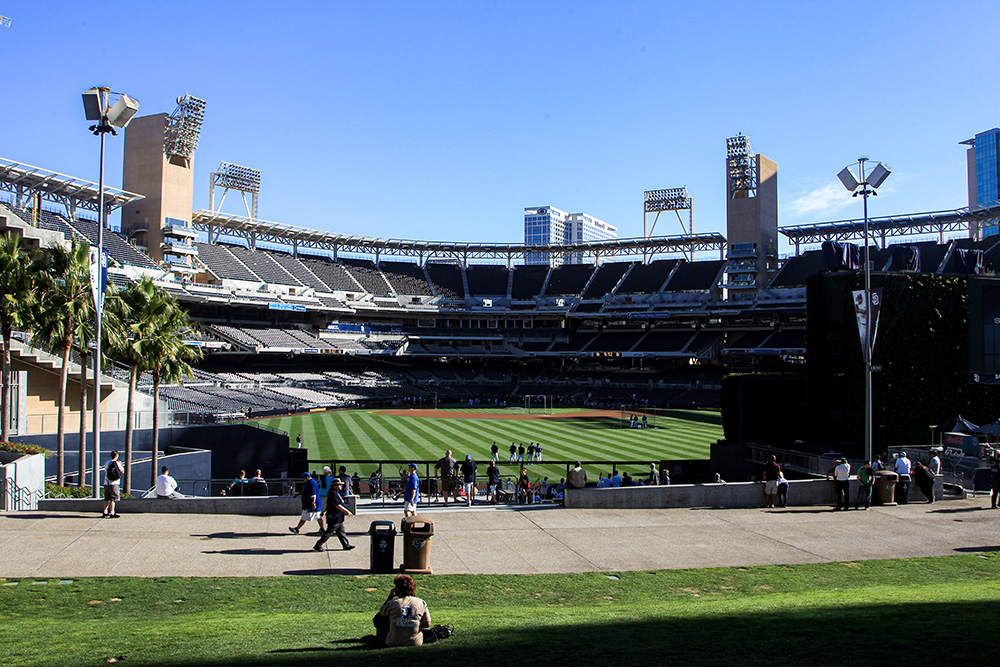 View of Petco from "Park at the Park" on top of Picnic Hill. During non-event hours, it serves as a neighborhood park. (Photo: Gordon Donovan) 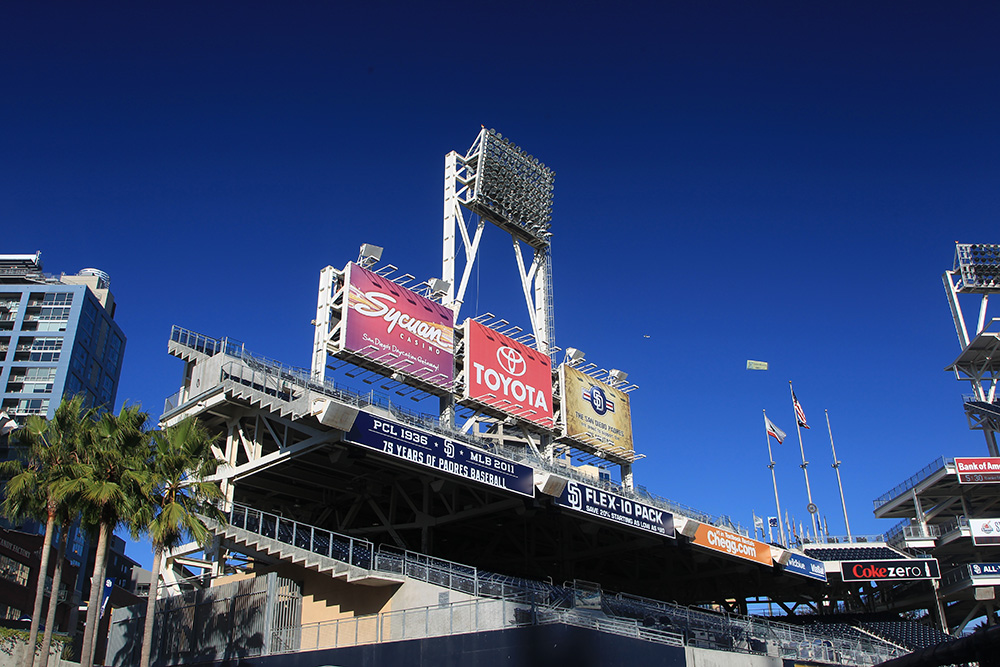 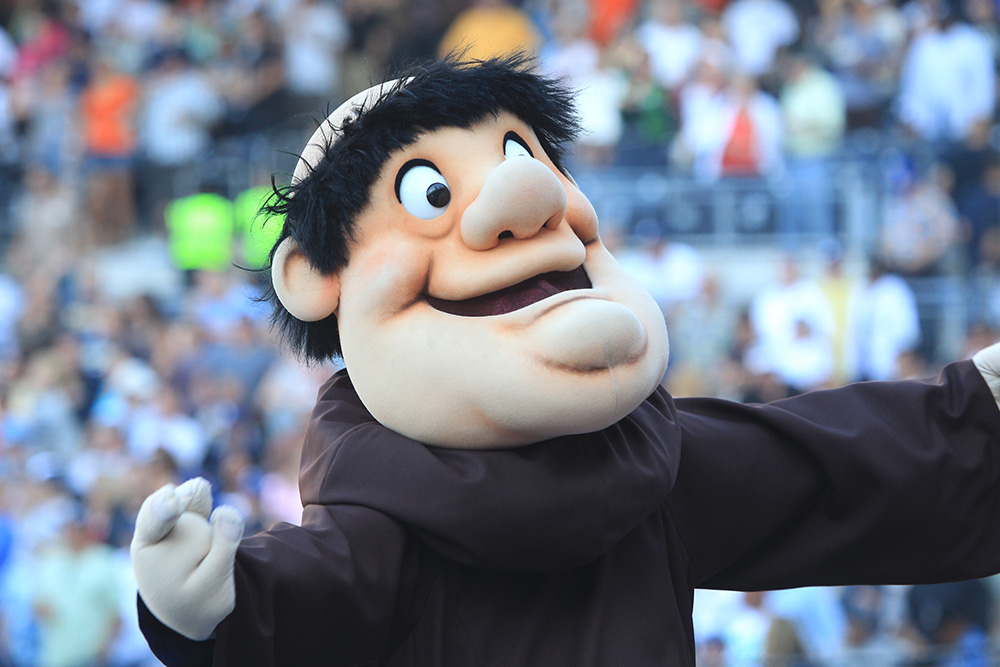 "The Swinging Friar" is the official mascot of the San Diego Padres. This fun-loving character pre-dates the Major League Padres, first serving as the mascot for the Pacific Coast League Padres. (Photo: Gordon Donovan) 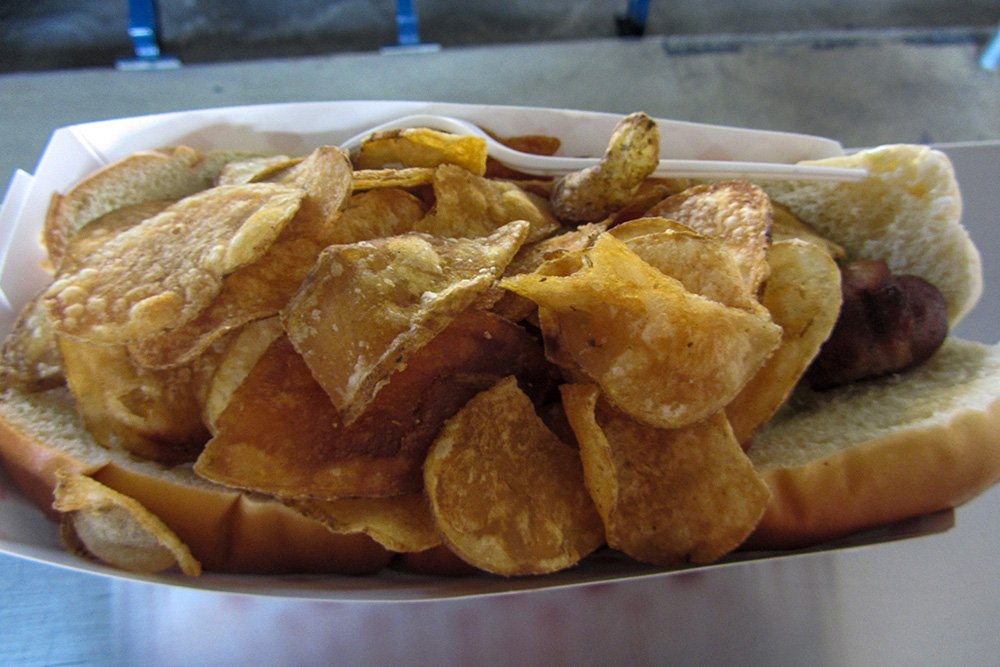 A hot dog covered in potato chips with beans, spicy tomatoes and onions. This dog and water from Diego Dogs cost $14 and was filling. There are 28 choices of bars or concessions at Petco Park. (Gordon Donovan) 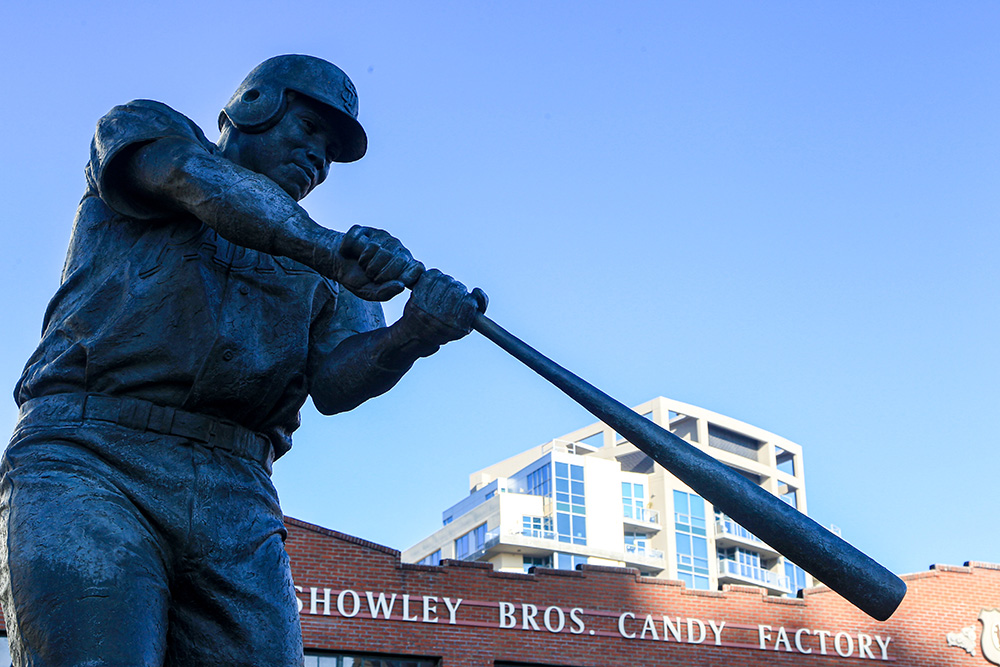 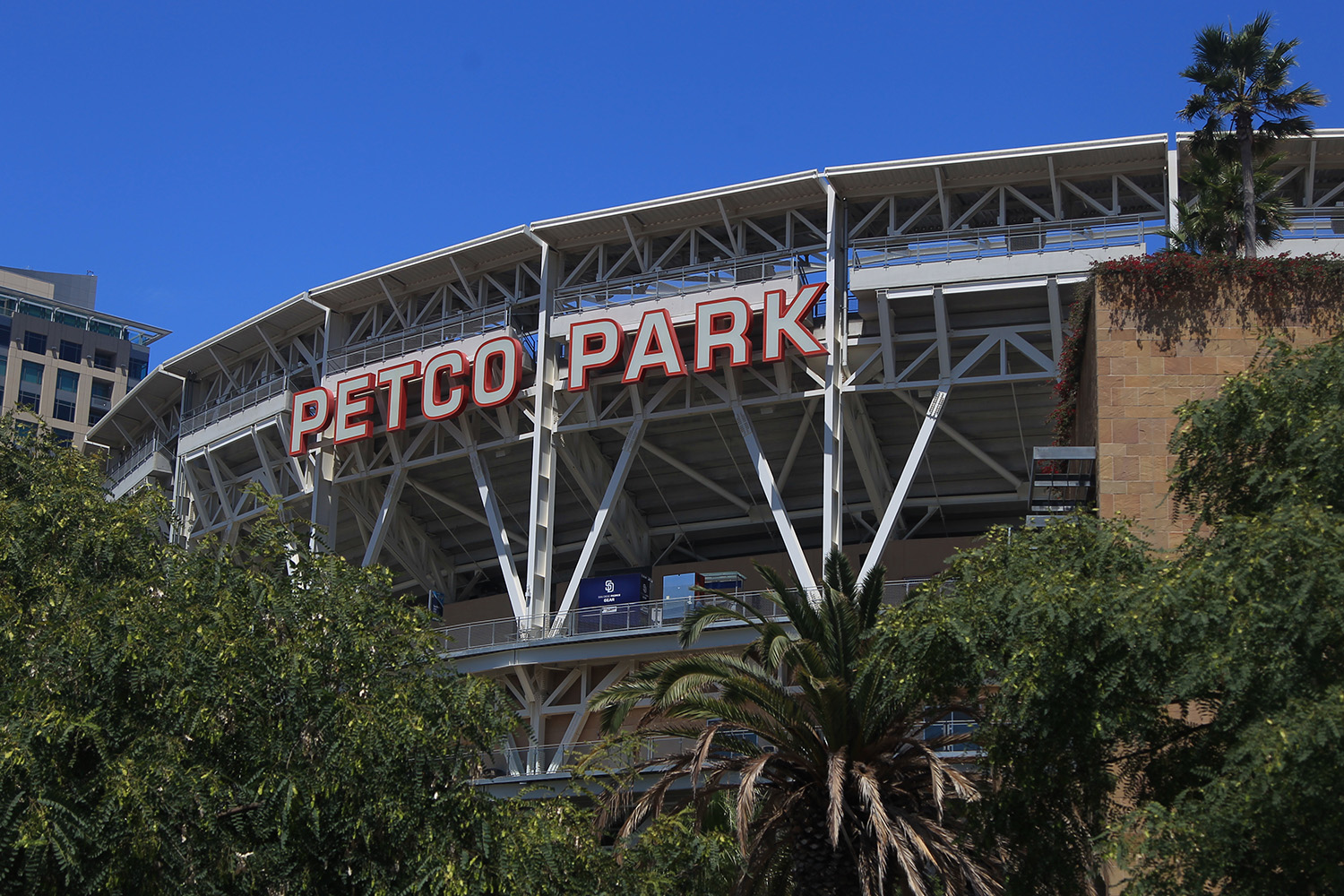 Palm trees and beautiful weather are two of the features of Petco Park. Architecturally magnificent, the stadium celebrates the natural beauty and cultural diversity and unique spirit of the region. It opened in 2004, replacing Qualcomm Stadium as the home of the San Diego Padres. (Photo: Gordon Donovan)

Ballpark: A - Clean and well kept, concourses were wide on field level. Great views of field all around. Beautiful area in center field where fans can watch games for $5 called "Park at the Park." Located just beyond the right field fence, "The Beach" sand area is a unique part of the Petco Park experience. Sat behind visitors dugout, six rows up for $71.

Fans & Atmosphere: B - The "Park at the Park" opens two and a half hours prior to the first pitch. Gates open an hour and a half before game time. Had areas for the kids like a mini ball park in center field. Several fans stood outside garage to seek autographs from players hours before game. Found more visitors than hard core fans.

Food: B - Food choices include traditional ballpark food as well as several restaurants that include Randy Jones BBQ, Filippis Pizza, Friar Franks and Anthonys Fish Grotto. Had a foot long dog with spicy tomatoes and onions with homemade potato chips and water for $14.

Mascot: C - "The Swinging Friar" is the official mascot of the San Diego Padres. This fun-loving character pre-dates the Major League Padres, first serving as the mascot for the Pacific Coast League Padres. He was chosen as the mascot in 1961 and has become a Padres fixture. He is kind of dull.

Staff: A - Friendly security staff. Ushers were courteous and some were real baseball fans. The ballpark tour guide was kind of snippy when she was overwhelmed by questions she did not know the answer to.

Team Tradition: B - No real team Hall of Fame, retired numbers of several Padres with borderline credentials. The Padres Hall of Fame Bar & Grill is located on the fifth floor of the Western Metal Supply Co. Building with glass enclosed lockers with memorabilia of Padre stars. Team and fans acknowledge all veterans in attendance before the game after national anthem.

Location: A - Downtown San Diego, walking distance from downtown hotels. Some limited parking around the ballpark.