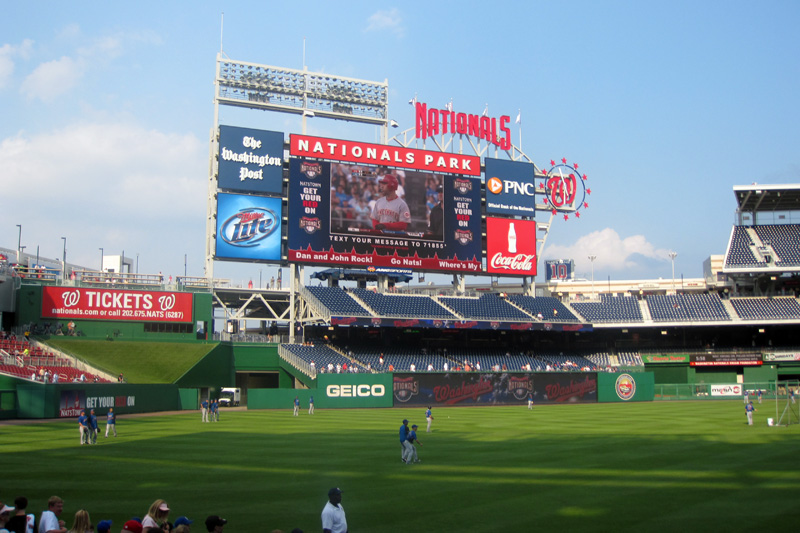 The park’s name echoes the original name of the early-1900s ballpark used by the Washington Senators/Nationals, which was called National Park until it was rebuilt and renamed Griffith Stadium.

According to the Elias Sports Bureau, Zimmerman’s game-winning home run was the third walk-off home run in major-league history to be hit in the first MLB game played at a stadium. The game was the most-watched MLB opening night in the history of ESPN.

Fans & Atmosphere: B – Great baseball scene for a new franchise
that will lose about 115 games this year. Several ballpark improvement projects were completed by the Nationals during the off-season to improve park.

Mascot: A – Screech the Eagle and the Mount Rushmore Presidents. The Presidents race every game with Teddy Roosevelt has never won a race in the four years the Nationals have played in D.C.

Staff: B – Great and friendly staff, found one or two ushers unpleasant.

Team Tradition: C – They don’t acknowledge the Expos and honor the two Washington Senators franchises that left town. The Nationals continue the nation’s capital’s baseball tradition of being first in war, first in peace and last in National League East.

Location: A – Nationals Park is located in the Southeast quadrant of Washington, D.C. on a block of South Capitol Street called Taxation Without Representation Street (a main artery separating Southeast from Southwest Washington) at the Anacostia River waterfront.