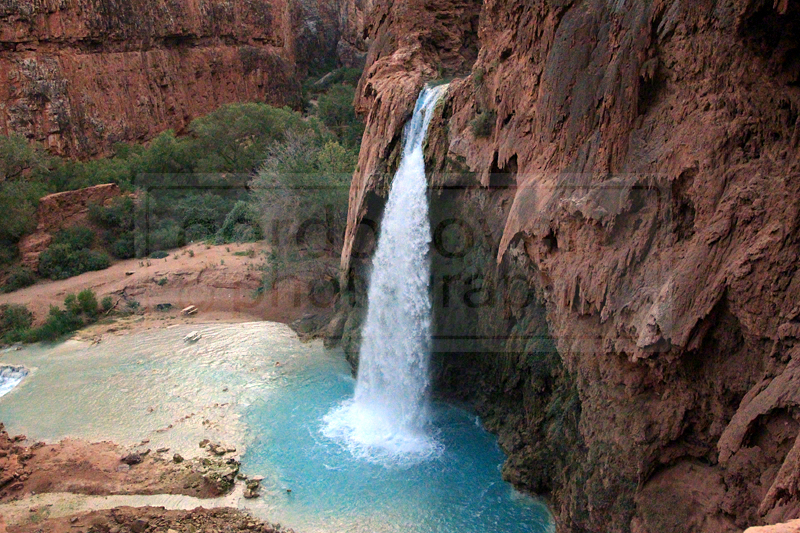 Havasu Falls and Havasu Creek get their blue color from the magnesium in the water. As the pools deepen and the calcium carbonate is slowly released from the water, the bluer the water appears as the relative magnesium content increases.

Havasu Falls is known throughout the world and has appeared in numerous magazines and television shows, and is often included in calendars that feature incredible waterfalls or beautiful scenery. Visitors from all over the world make the trip to Havasupai primarily for Havasu Falls.

This, the most striking waterfall in the Grand Canyon, sports a wide sandy beach and plenty of shady cottonwood trees to relax by. Havasu Falls is just a quarter mile from Lower Navajo Falls and about a quarter of a mile before you reach the campground.

Easily accessible from several paths leading down to the refreshing waters, of course you must take a swim. Below the major pool, you can explore smaller pools as the stream cascades and winds its way towards the campground.

The trail head begins at Hualapai Hilltop. Hualapai Hilltop can be reached at the end of Indian Road 18 which is 65 miles north of Route 66. The Havasupi Indian Reservation is west of the Grand Canyon Village on the South Rim. 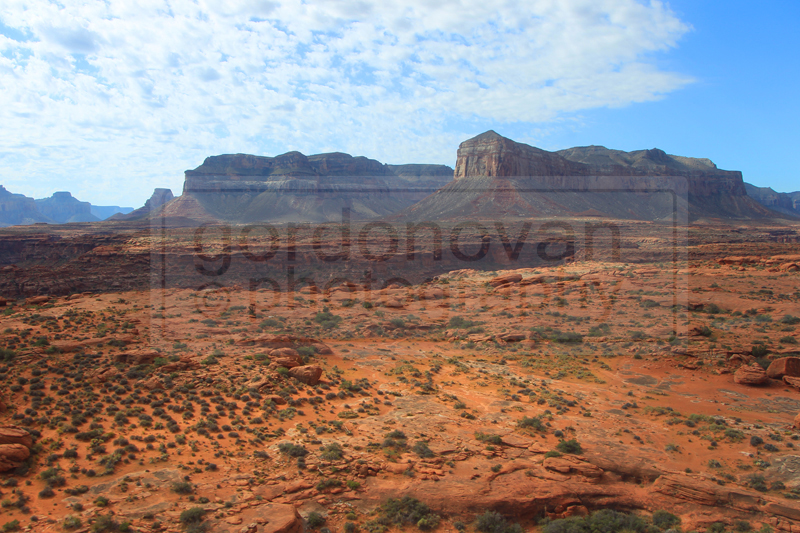 The helicopter ride out of the Huvasupai Indian Reservation back to the hilltop. No way was I going to hike out today. 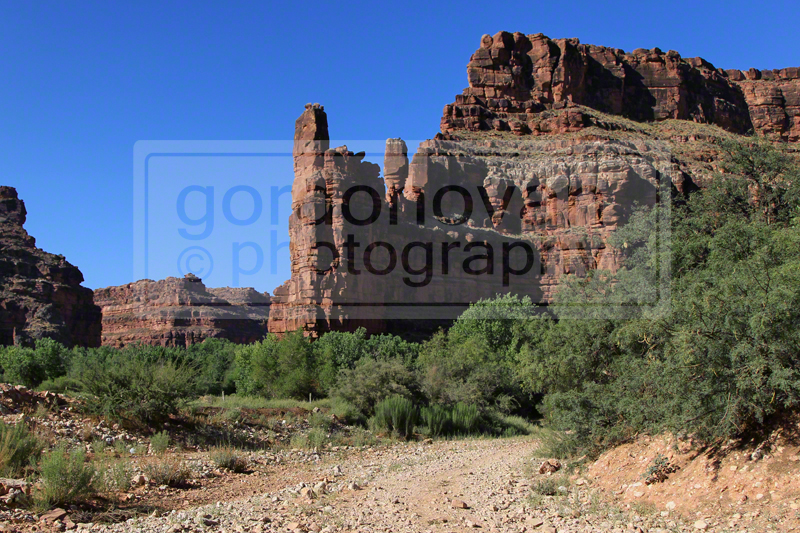 At the camp I was told to follow another trail along the creek that went eight miles downhill to the Colorado River. More hiking! No wonder I go cellulitis. 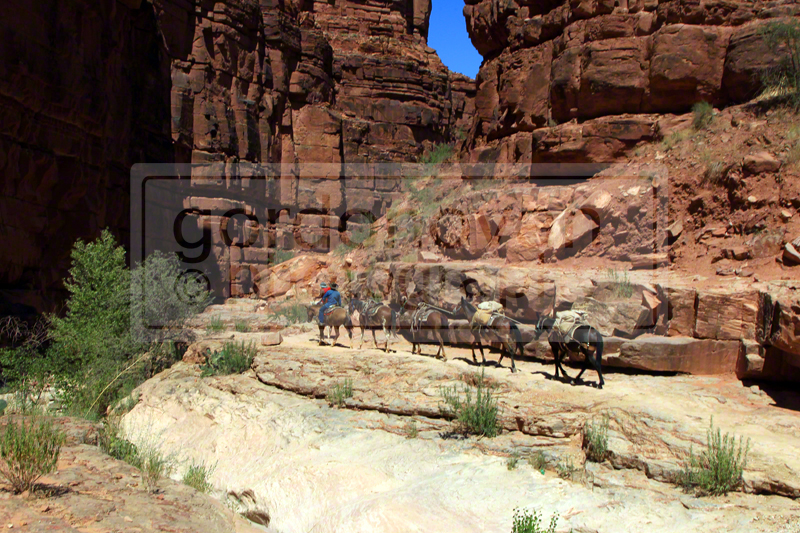 The trail carves through a narrow canyon as you make your way to the village. Please Carefully Listen for and Watch out for the mule pack trains that frequent the trail during tourist season and DO NOT wear headphones. 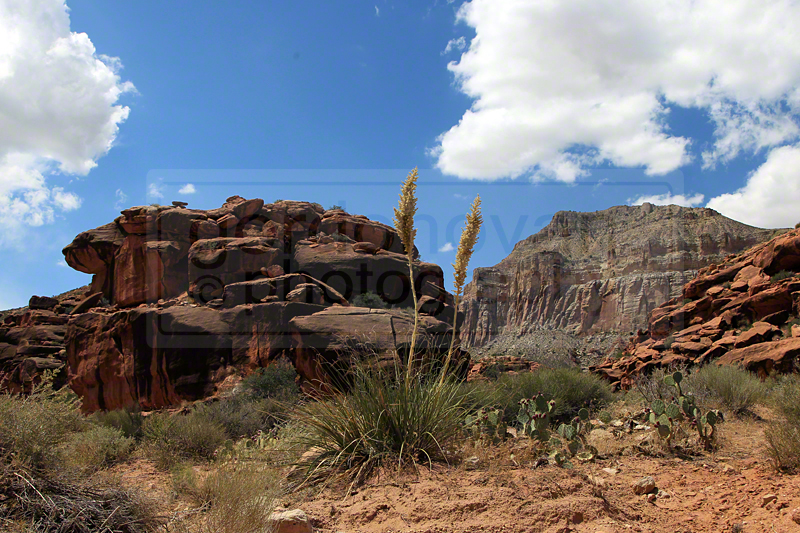 Hikers are encouraged to start early to avoid the midday heat during the summer. Never hike in the middle of the day to avoid serious ailments such as dehydration, heat exhaustion or heat stroke. 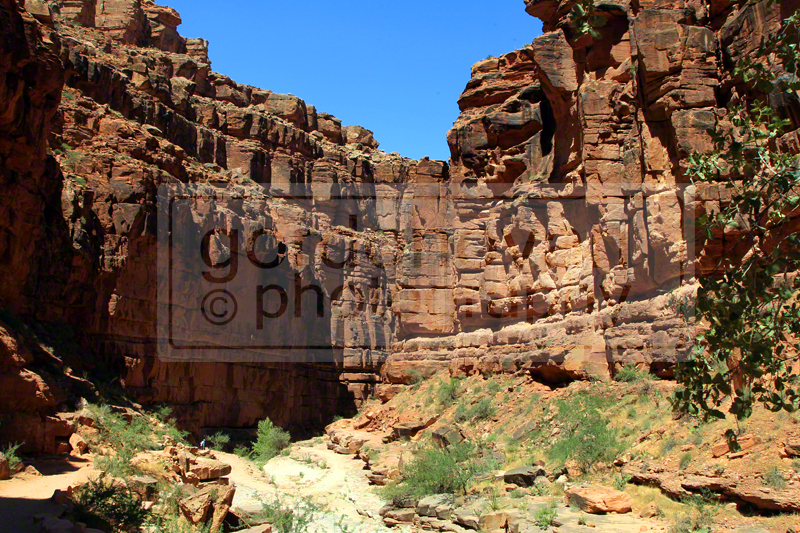 The canyons that were high as lower Manhattan skyscrapers. 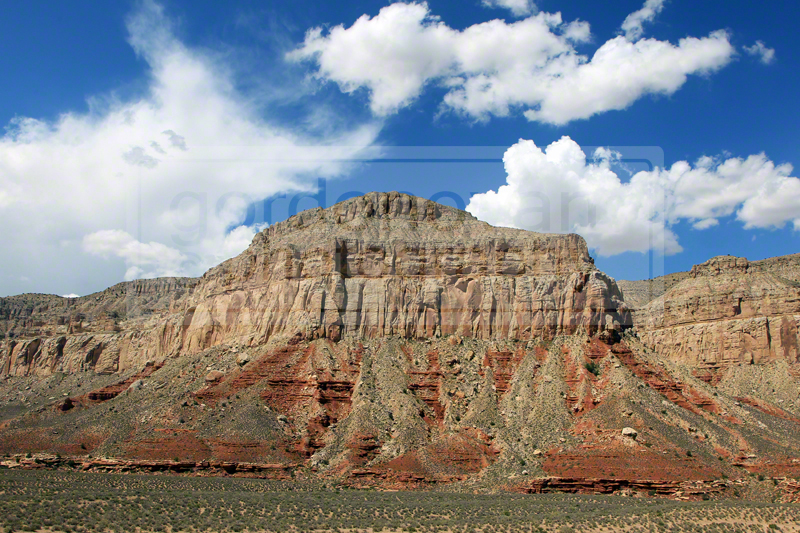 The hike is considered moderately difficult. The hike starts off steep and winds down switchbacks for at least a 1 ½ miles. 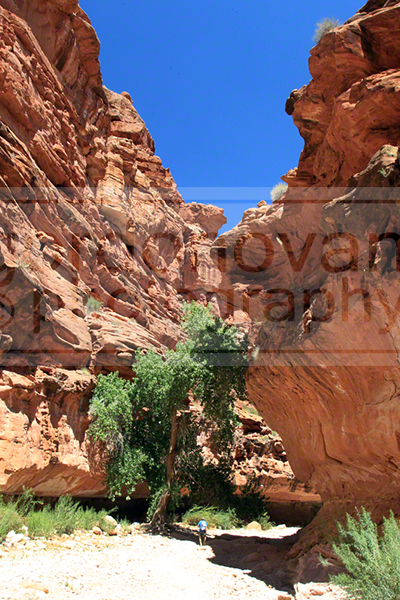 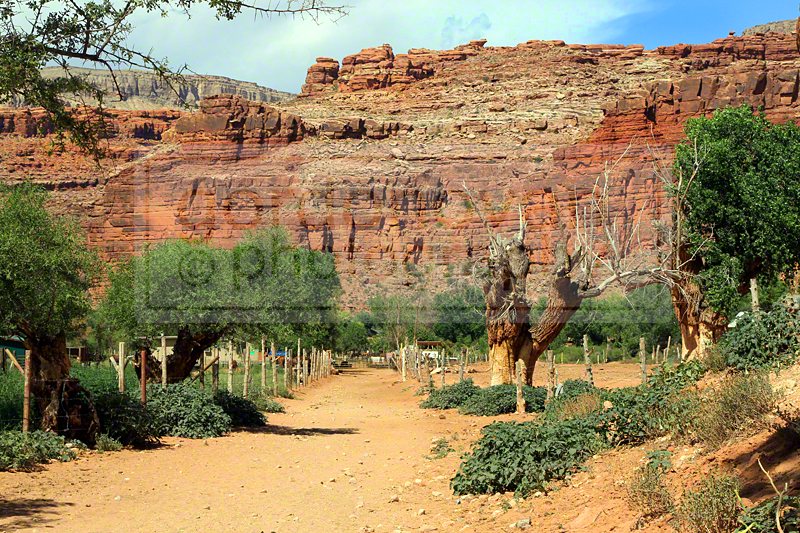 After four hours I reached the camp, I was done. The first seven miles were easy, I felt like I was going to collapse in the last mile. Man did my hamstrings ache. 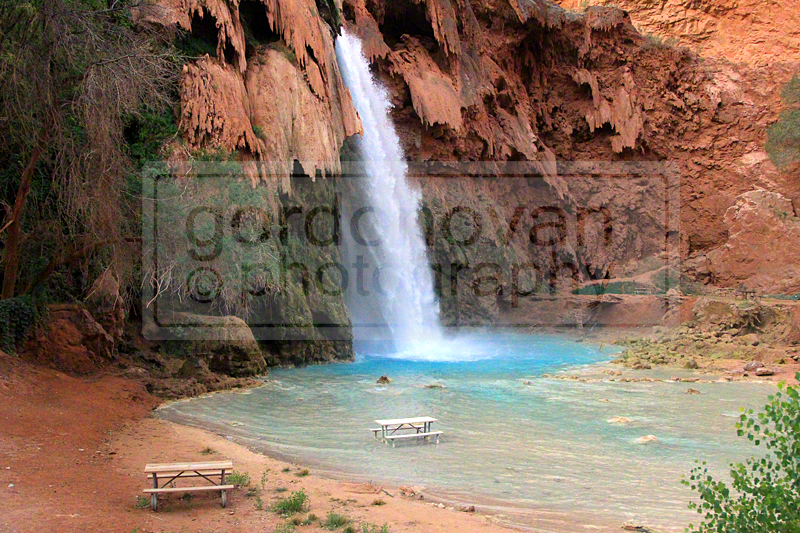 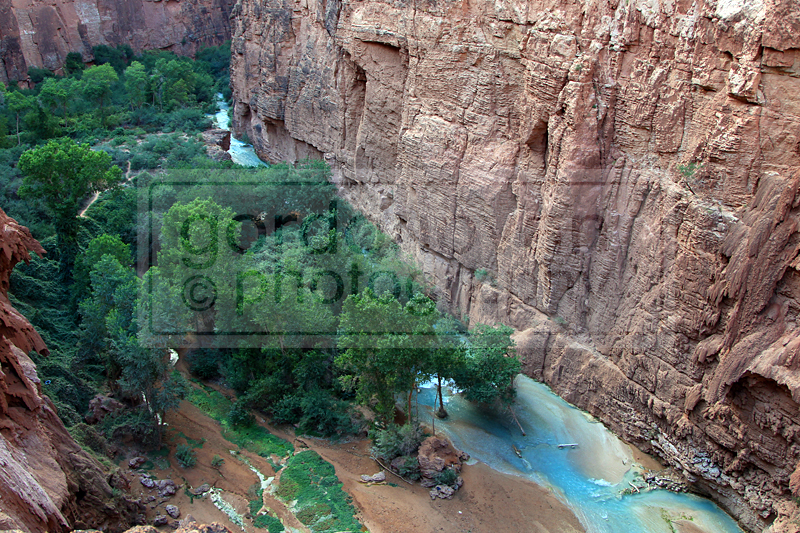 Mooney Falls is named after a miner who fell to his death here in 1882. There are several versions of the story, including one where Mooney was suspended on a rope half way down the cliff unable to go either up or down. 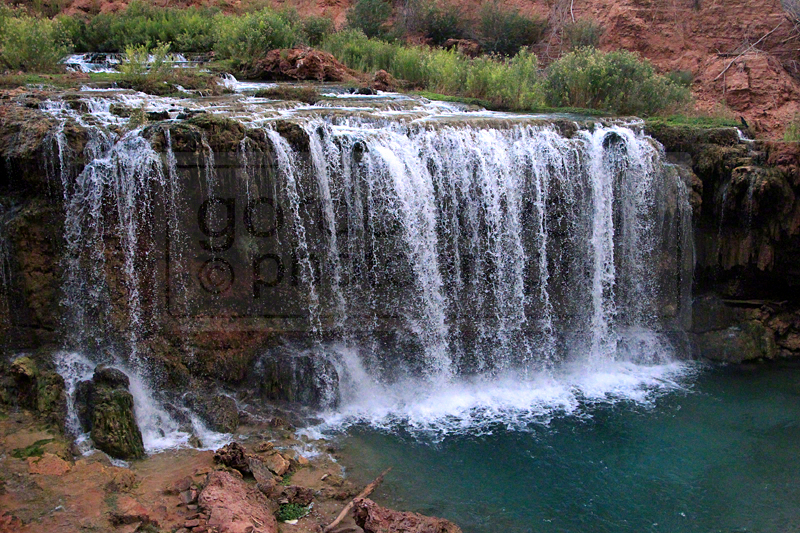 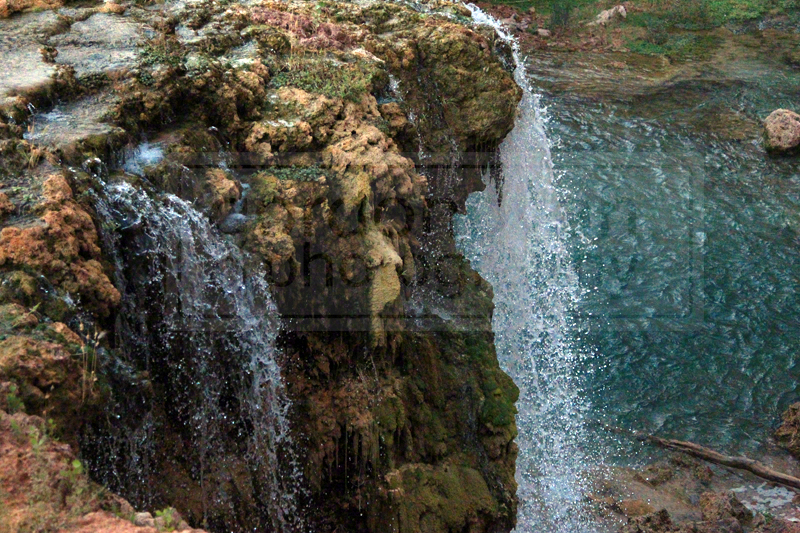 Rock Falls is about 30' high and nearly 100' wide and has a nice swimming hole. 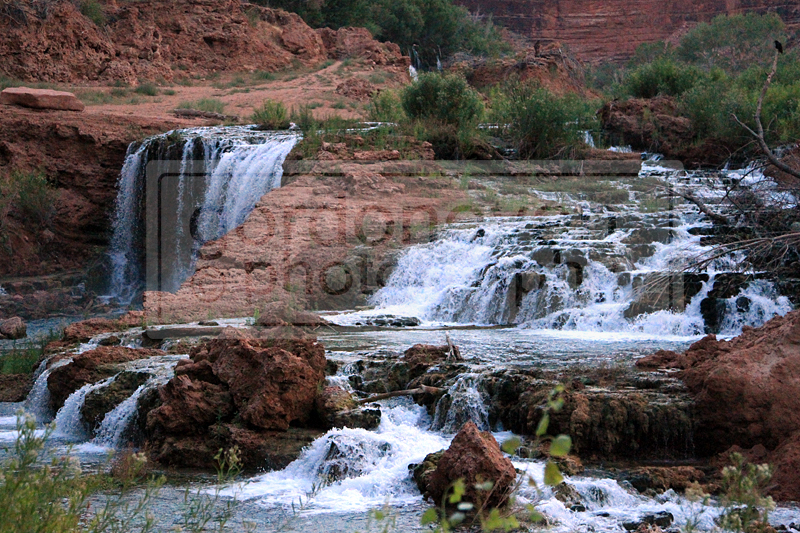 Rock Falls was the second major waterfall created by mother nature during the flood of 2008 when a massive mud slide caused the creek bed to move. 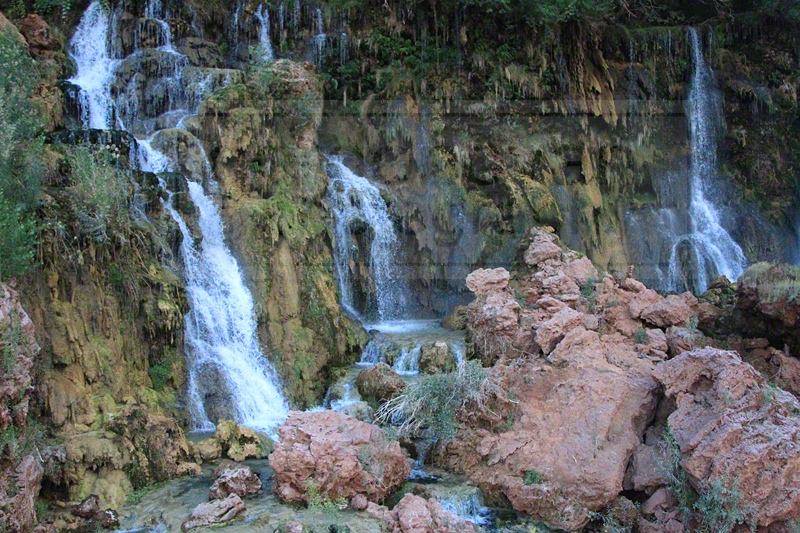 Upper Navajo Falls come into being in 2008 when the flood of that year moved massive amounts of rock and mud gouging out a deep bed. The old Navajo Falls was bypassed in the process leaving it dry. 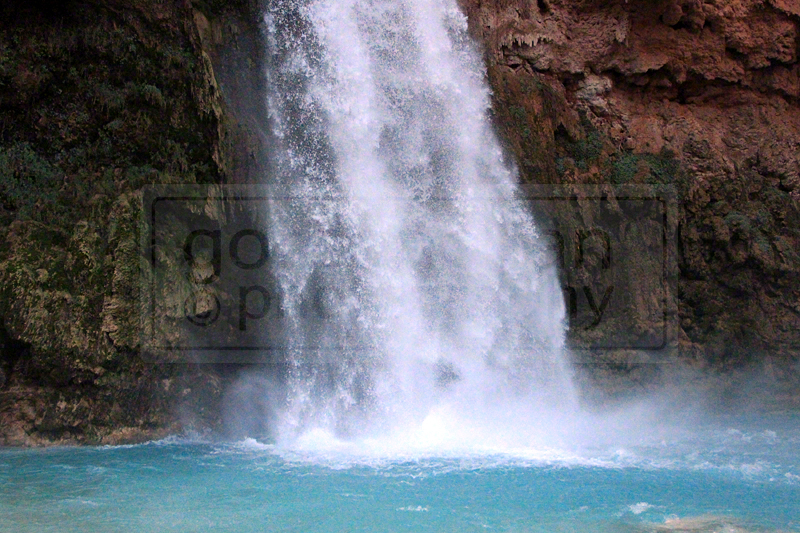 As the creek originates from a spring, the water rarely deviates from 70 degrees Fahrenheit year round. 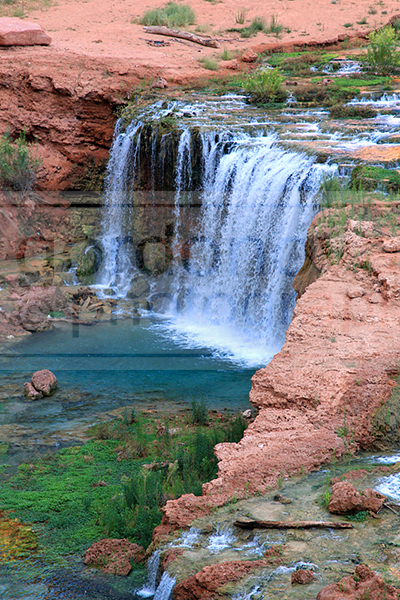 There is a ledge directly under and behind the falls that many visitors scramble up to jump through the refreshing shower into the crystal clear pool. 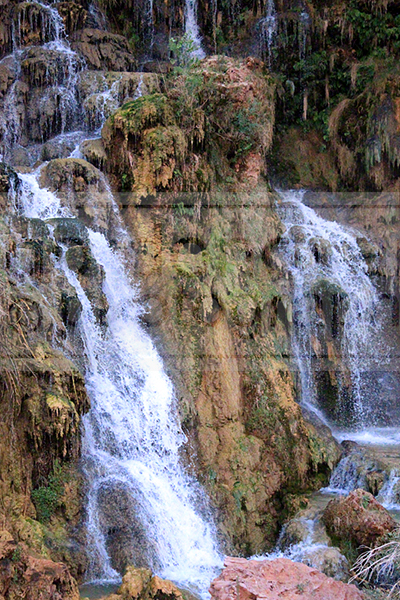 New Navajo Falls has one of the same characteristics of its namesake; the creek erupts out of dense vegetation in many different streams to fall about 50' into the pool. 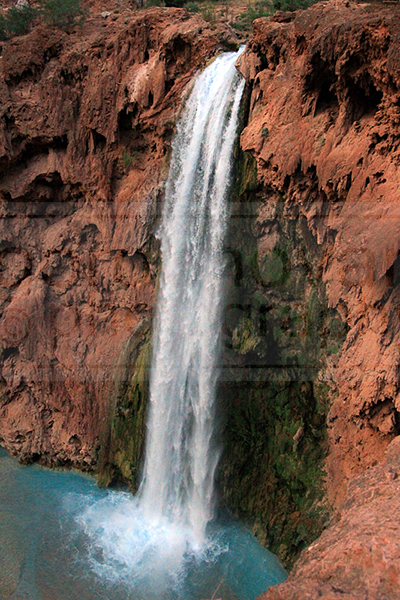 Mooney Falls is the tallest of our waterfalls tumbling over 190' into a large blue pool which is perfect for swimming.