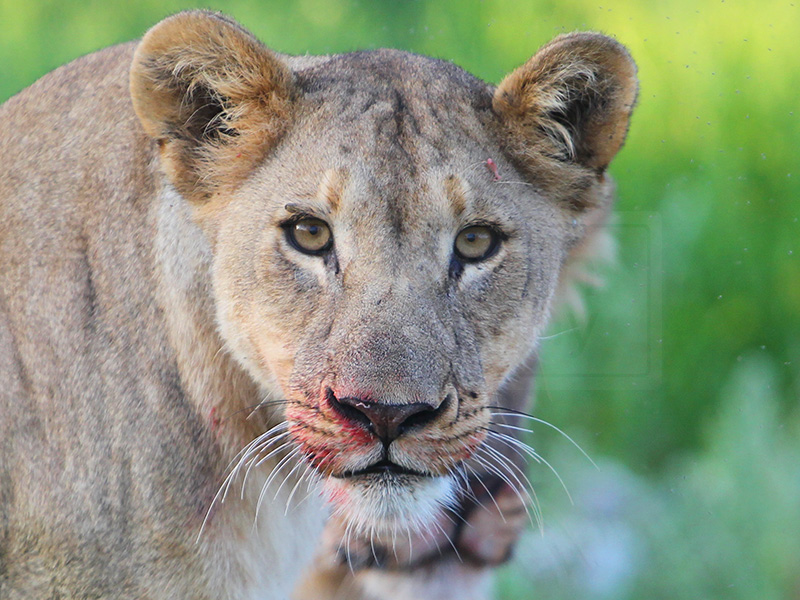 Day eight of Gordon Donovan's journey back to Namibia's Etosha National Park. My first full day out of the Namutoni Camp. Lets see if my fortunes continue.

As I jumped out of bed late and ran out the door to grab some breakfast. I was not happy about waking up late. I thought it still in the early morning and I did not bother looking at phone to check the time. None of the rooms I stayed at in Namibia had clocks. I was having so much trouble sleeping and forgot to set alarm. I drove to get tea, toast and fruit for breakfast. I drove out the gate the moment it was opened. I drove 150 feet from gate where NWR truck was parked. When I pulled along the side of the road, a pride of seven lions were having a morning buffet on a giraffe. The large male was gone already since the kill was made before sunrise. I was able to get some great shots and video for 20 minutes before the general admission vehicles arrived with noisy tourists.

As more cars arrived, the lions ran off but returned a moment or two later. The kill was 15 feet from the roads edge and then two of the young males pulled the carcass further back from the road. You could hear the bones crunching and growling of the lions. The young males sucked the bones dried and then left scraps to baby sister. As she chewed up the giraffe, several jackals approached to eat what remained. A few other members of the pride chased off the jackals. The young lioness finished up as one jackal returned to chew up on the remains.

I moved on to Dik-dik Drive to find the woods filled with zebra and giraffes. Some dik-diks were eating vegetation along the side of the road. Plenty of trees but no leopards were in the trees. There were many splintered trees in some spots. It looked as though they were struck by lightning. I headed to other locations north of Namutoni past Tsumcor to see a few places I did not visit back in October. Not much going on up north. At Stinkwater I did see a few things, a camera shy martial eagle and a dead giraffe that looked like it was dissected in a high school biology class.

My good fortunes had dried up in the hot sun as the temperatures begun to rise to 37 Celsius (98.6 degrees). The animals were in the shade to beat the heat, as should I. After a break I wondered out in the late afternoon to get photos of flamingoes and other birds in the Fischer Pan. Aroe was beat but I got some landscape shots at Two Palms Waterhole.

I drove back to Namutoni but had an hour of light left. I darted out to Kalkheuwel and Koinachas but no activity other than a few kori bustards and giraffes on the side of the road. Chudob was holding a giraffe and antelope conference. It’s a shame I could hang out after dark. There was a lot activity and something was spooking the giraffes in woods on the far side of the waterhole. I headed back to camp but I crashed Klein Namutoni one last time to see if the pride was back. No action and so it was time to go back to the room to pack for Okonjima and fill up with fruit and fluids. I had two good mornings in a row and one very successful day. No reason to complain anymore. I will have a lot of editing to do.

Click here to see a video of lions eating and watching onlookers.