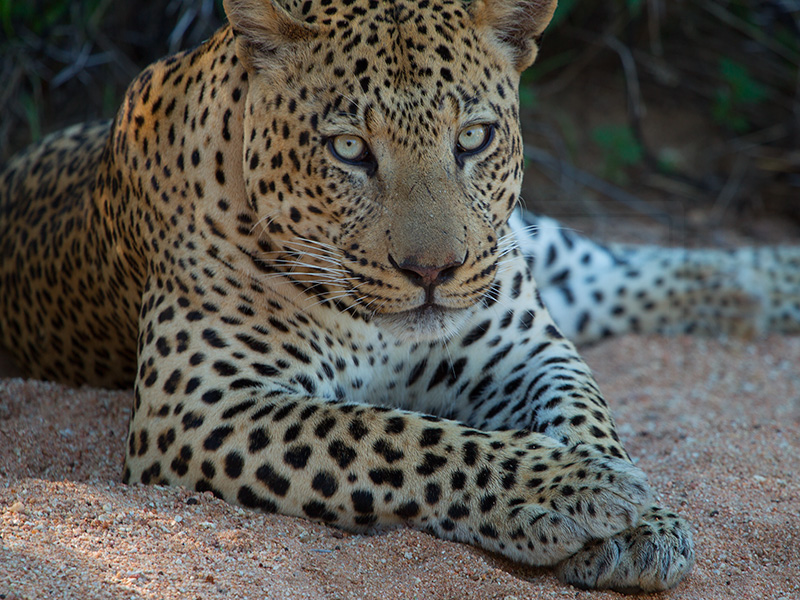 I did not have the best night's sleep as I packed early for my journey home. I had to pull out the pants and the fleece. There was a great chill heading toward the Northeast. The temperature change was 80 degrees. I enjoyed a morning bite, and off we went to track leopards. We drove and I finally saw some red hartebeests enjoying breakfast.

We saw some kudus chopping down on vegetation, but they were very jumpy and making noise. Out of the brush came a male leopard.

The leopard rubbed his face against the brush and moved toward a dried riverbed that was easier terrain on which to to walk. We followed him at several points of the riverbed, and then moved right behind him. We then went past him to catch him coming toward us.

We then waited -- and here he came, right at us. As he approached the vehicle and walked alongside, we were told -- no sudden movements.
He walked with the truck, then past us and down the riverbed. After moving ahead, we got stuck in the riverbed.

We eventually got out and did not see any more of the leopard, but we did encounter a hyena who just wanted to be left alone. He just lied in the riverbed, occasionally popping his head up. We headed back to lodge for breakfast and to load up the truck.

After a lovely breakfast, I said good bye and cleaned out the truck and drove slowly down a lumpy gravel road behind my new friends from Angola. The drive to Windhoek was smooth, and I arrived back at the car company early. No flat tires, no breakdowns, just extra gas in the tank that I did not get credit for. Samuel drove me to airport for a day of planes, buses, customs, subways and a drastic change of weather. I will be in Africa again real soon. I miss it every day.