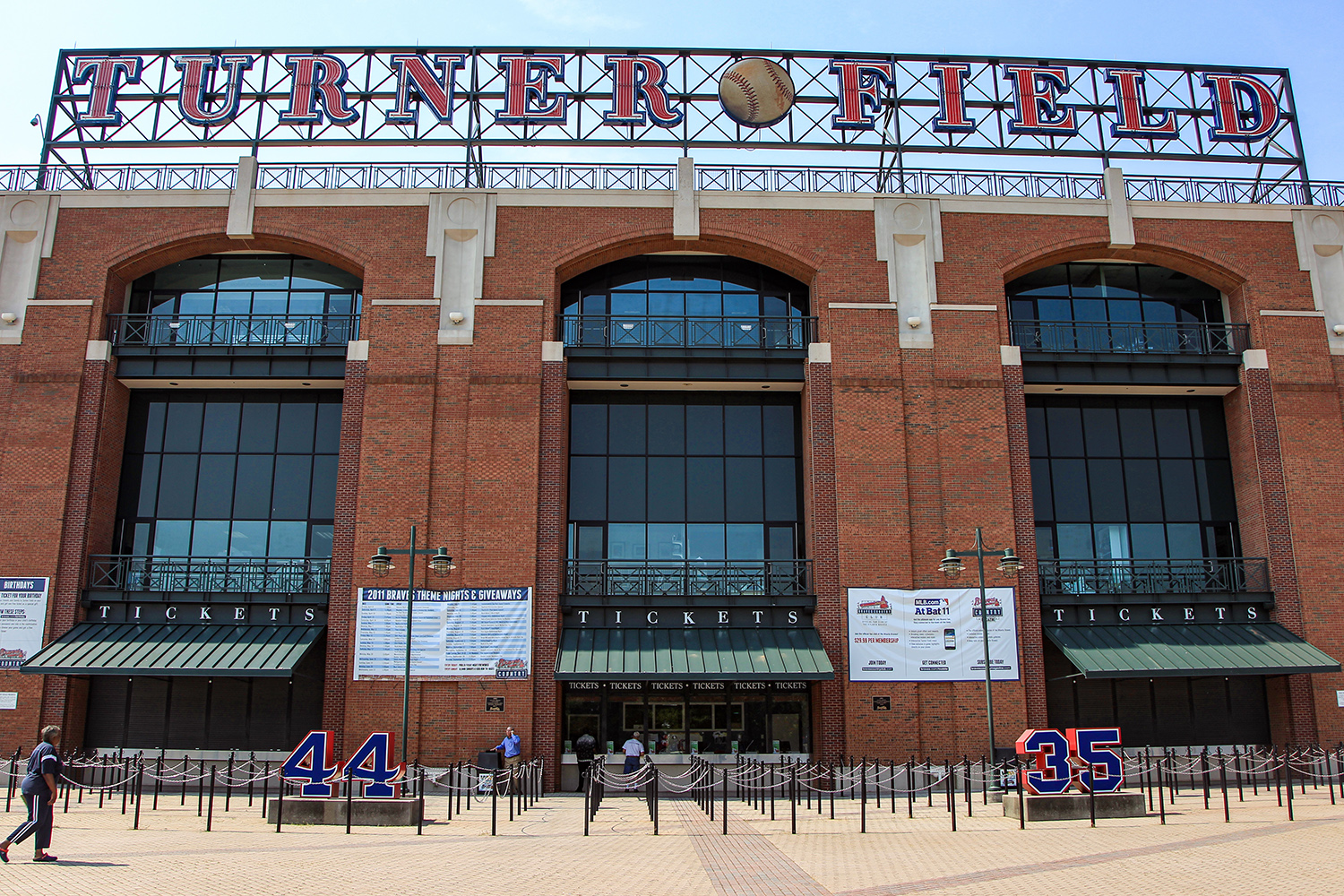 The ballpark is just south of downtown Atlanta, just off the highway. I found a parking lot that was small on the side of the street for $12.00. Wearing a plain colored t-shirt, I was greeted by friendly security guards that checked my backpack at the main gate. They asked about my camera I was carrying and if I had a pocket knife?

The kid's area called the "Scouts Alley" just inside the main gate is well done and offers many food choices and the team store. I wandered around the park taking photos during batting practice with no problems. Many ushers welcomed me to Braves Country. The ushers and many of the concessions staff were polite and friendly.

The stadium is nice, reminded of Oriole Park at Camden Yards and Progressive Field in style. But it lacked some of the character those two parks have. I really was not impressed by the park, perhaps because I have found the three of the best and a few of the worst already. So many parks are just in between now. Many now borrow ideas and styles from other parks.

Players are easy to access for autograph seekers as the seats are close to the field to see the action. I was surprised by how the maintenance was not kept up in some areas on the field level. Many seats were rusty and walking areas had paint peeling up and were chipping. It reminded me of Sunlife Stadium in Miami.

The view of the field was great where I sat eight rows up from the field level. I could see all the action on the field. Many Braves fans were friendly even after they realized I was not a Braves fan. Despite a late Braves rally, many fans had cleared out to beat traffic. Many Met fans stayed to the end by the visitors' dugout in the Mets 4-3 win.

Getting out of the stadium was a bit of a headache, no wonder people left early. Traffic was tight until you got on the highway.

The second day I went on a tour of the park. When I arrived at the entrance where the tour started wearing a Mets hat and shirt, I was greeted by a rude staff member who I later observed the same staff member being more hospitable towards fans wearing Braves gear.

The Braves Museum Hall of Fame and Museum is excellent, much better than what other organizations have. Great artifacts and photos, while in the museum the tour guide leader was asked about the Braves days in Boston and what stadium they played. He did not know the answer.

Walking around the park before the game with the Mets hat gear, I was harassed by a supervisor about walking and taking photos. I said hello to an usher who was friendly the night before, who remarked with some haste in her voice, "You're a Mets fan!"

The game was delayed by rain twice and ended after midnight. The Braves staff cleared fans from the field level before the start of the game. An amazing display of thunder and lightning and was soon followed by heavy rain and a hail storm as you heard oh's and ah's from fans in the covered areas.

The storm brought more heavy winds, rain and lightning forced play to be stopped in the top of the fifth inning. By that time the game started again, many fans had left and the die-hards moved down right behind the dugouts.

During the 7th inning stretch, the Tomahawk Team danced on the dugouts to John Denver's "Thank God I'm a Country Boy" while throwing shirts to fans.

As the game ended the heavy rains started once again and as I headed for the car. Many Met fans and myself heard the abuse of Atlanta Braves fans as expected following the Mets 4-0 win.

I feel like attending two different ballparks. One I was treated with southern hospitality by staff and fans. The following day I was treated the way General Sherman the same way treated Atlanta. 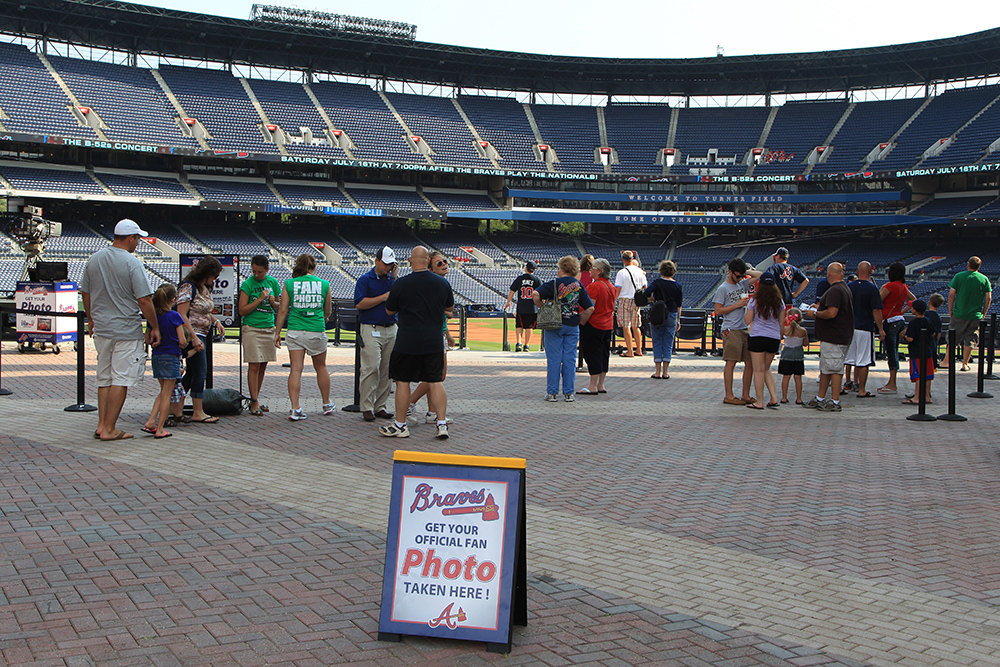 The concourse in the outfield during batting practice at Turner Field. (Photo: Gordon Donovan) 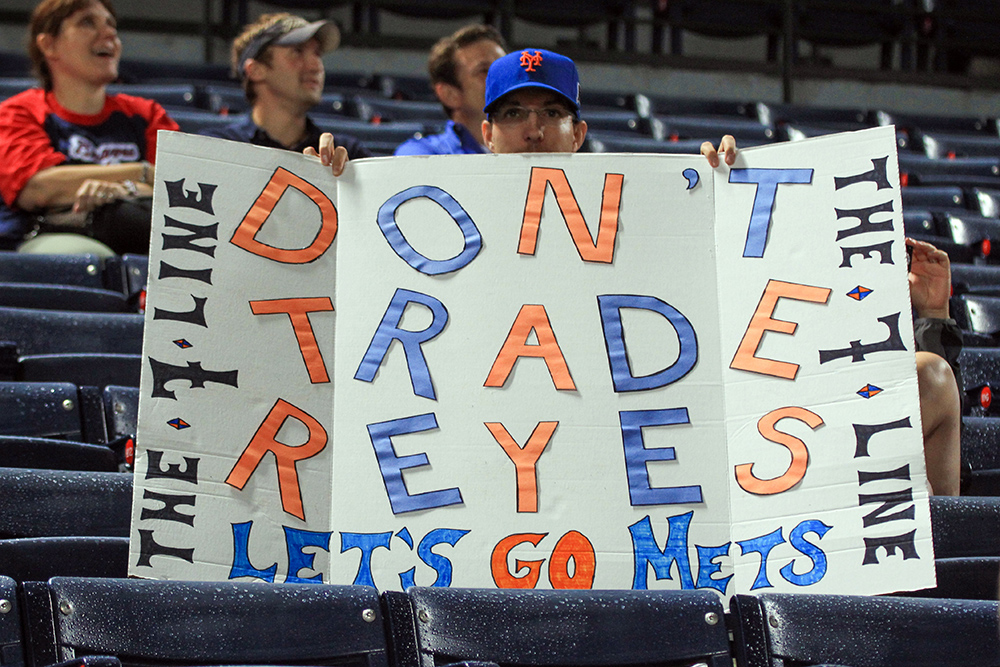 Many Met fans were on hand to cheer on the Mets, including this fan in support of Mets shortstop Jose Reyes who may end up elsewhere due to the team's financial woes. Some said that Met fans outnumbered Braves fans in the Atlanta ballpark. (Photo: Gordon Donovan) 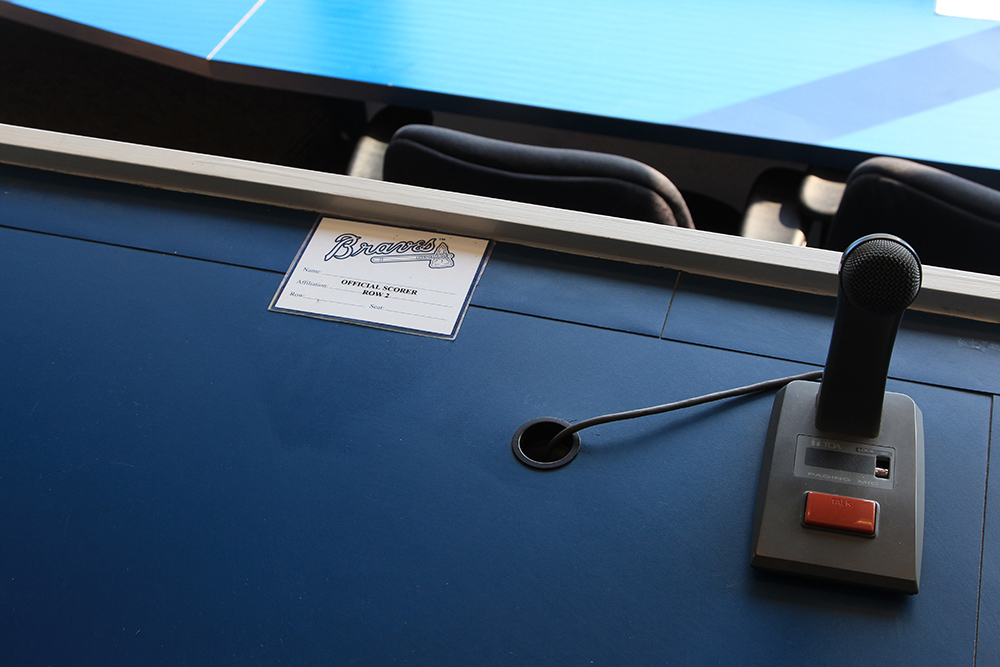 If you are lucky enough to sit in the press box, here is the spot designated for the official scorer with the microphone to report calls to the scoreboard attendant and the radio-television broadcast. (Photo: Gordon Donovan) 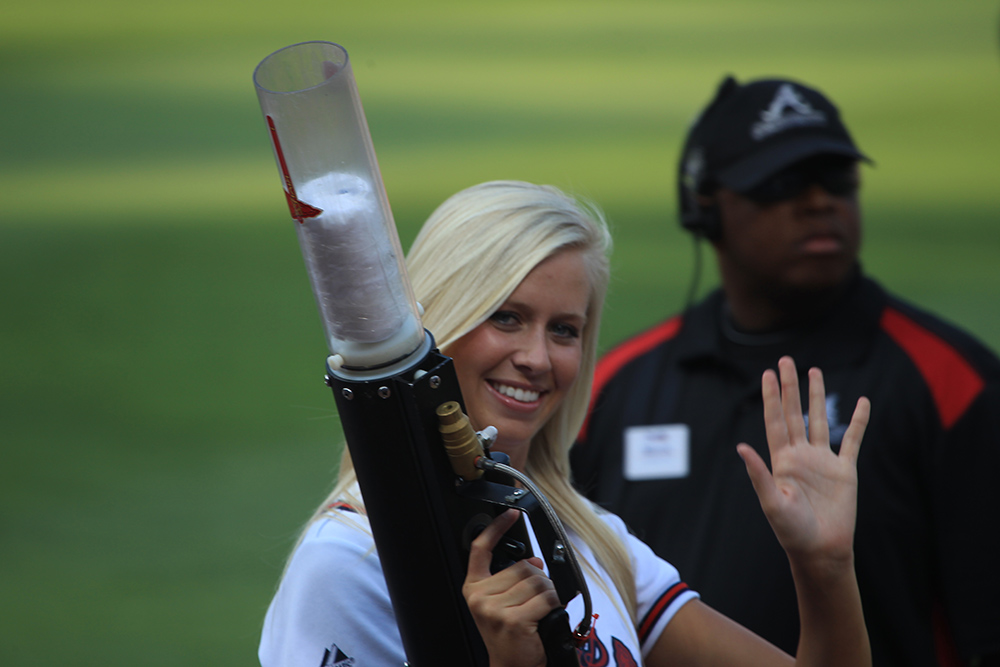 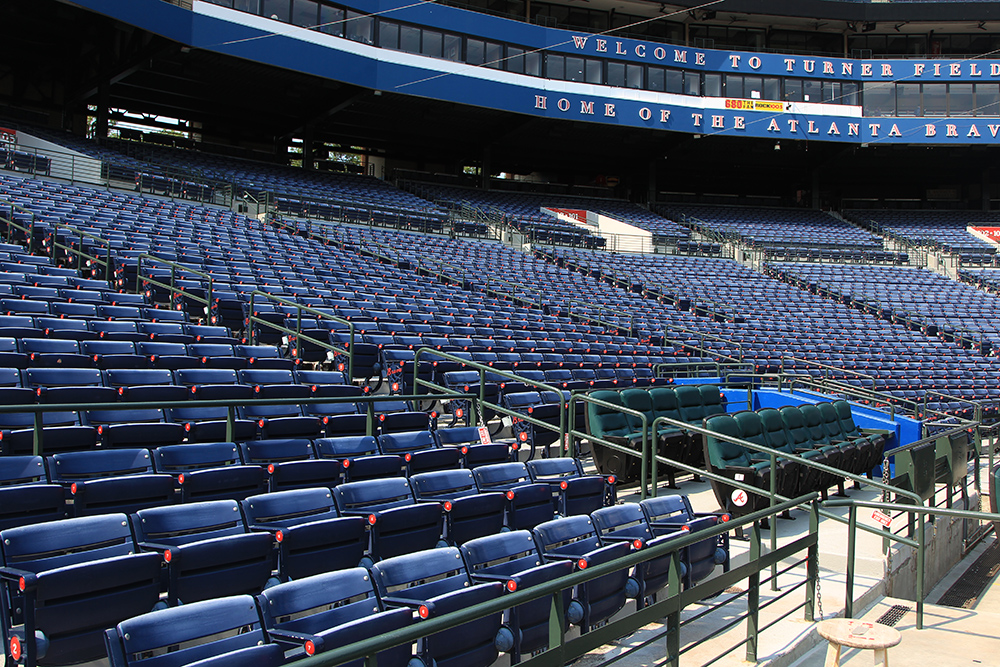 The field level seats are rows of cramped seats not made for overweight Braves fans at Turner Field in Atlanta. (Photo: Gordon Donovan) 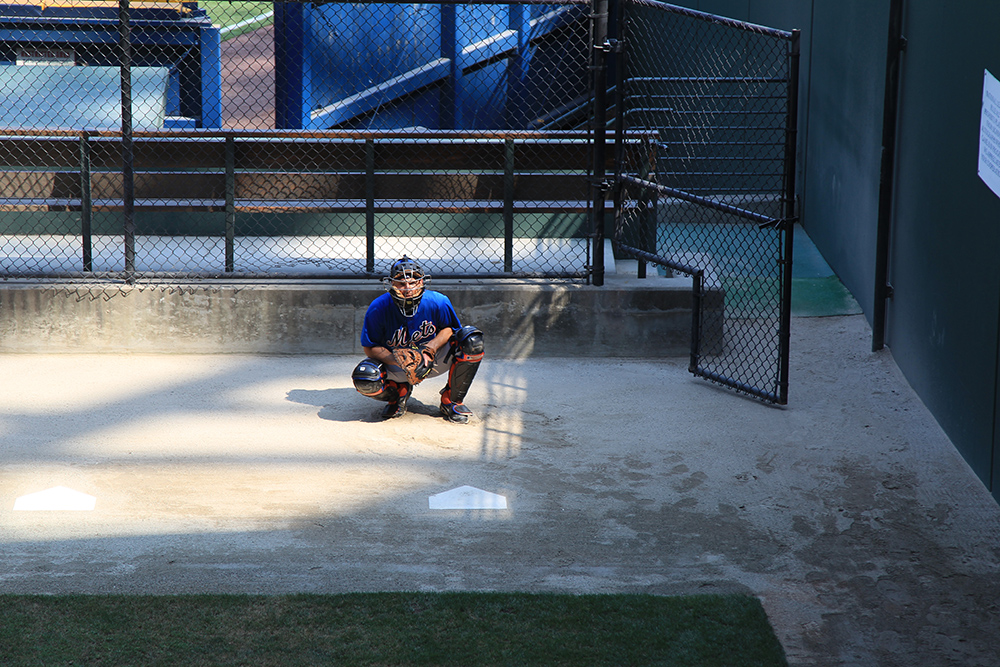 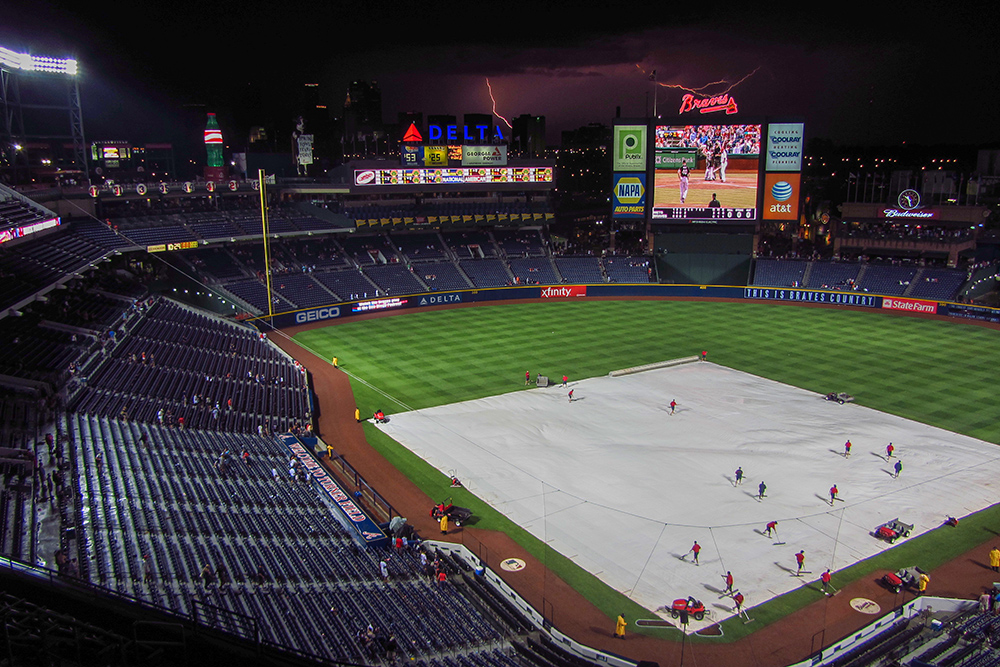 Lighting fills the sky lights as an approaching thunderstorm as the ground crew covers the field during the baseball game between the Mets and Braves at Turner Field. (Photo: Gordon Donovan) 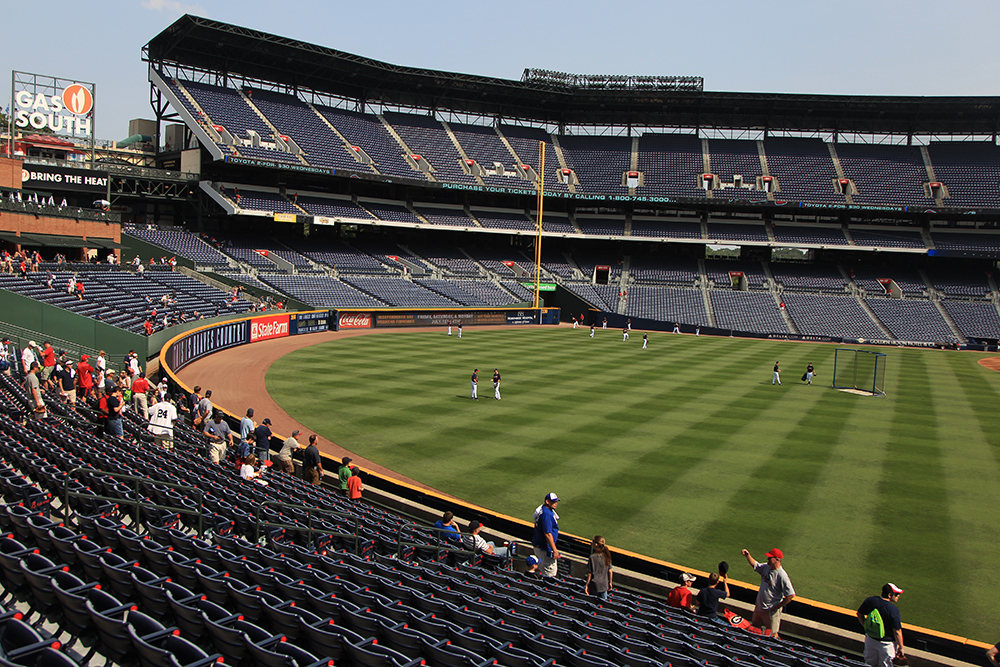 Fans are limited to just the outfield seats while the Braves take batting practice. Gates open up two and half hours before the start of the game. The gates for access to all levels of Turner Field open two hours before game time. (Photo: Gordon Donovan) 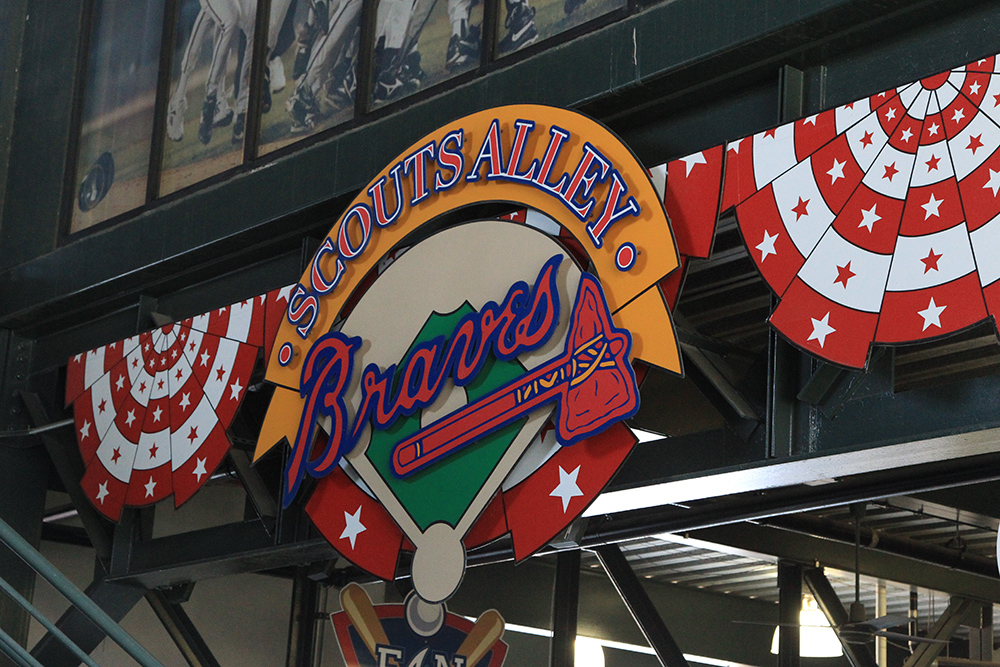 In the Scouts Alley, fans can test their hitting skills at "Outta the Park" and their throwing skills at "Power Pitcher," "In Control" and "Throwin' Heat." (Photo: Gordon Donovan) 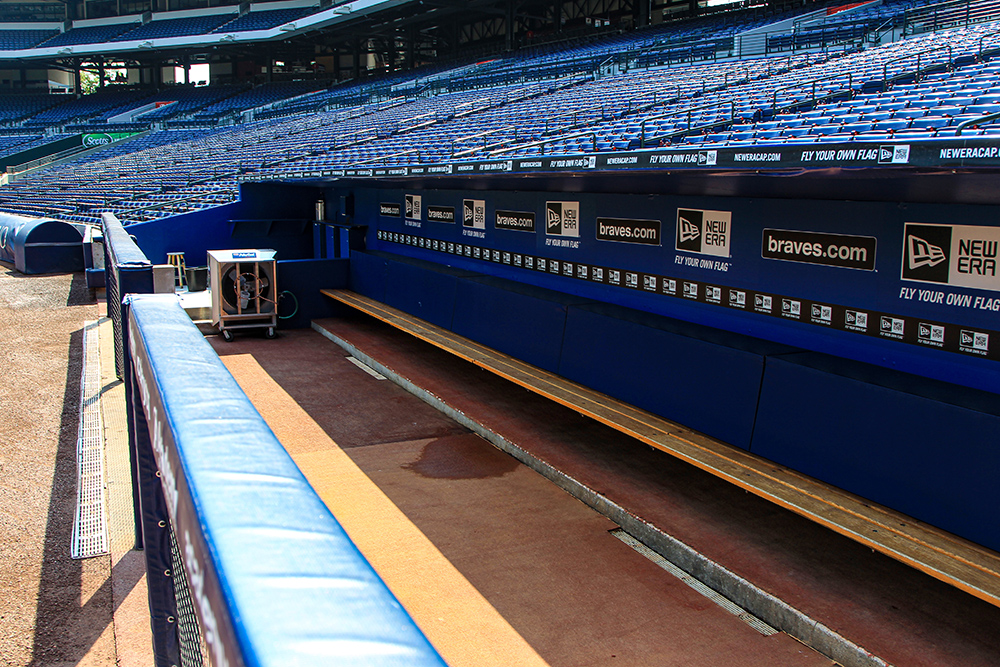 The home team dugout of the Atlanta Braves at Turner Field during a tour of the ballpark hours before game time. (Photo: Gordon Donovan) 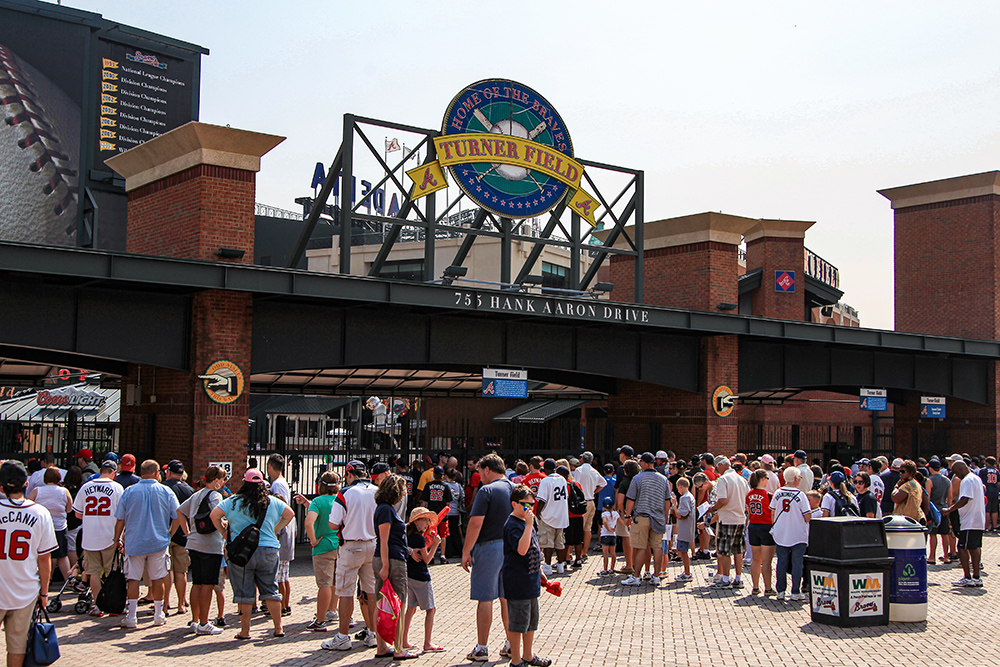 Fans gather outside the gate at Turner Field before the baseball game between the Mets and Braves. (Photo: Gordon Donovan) 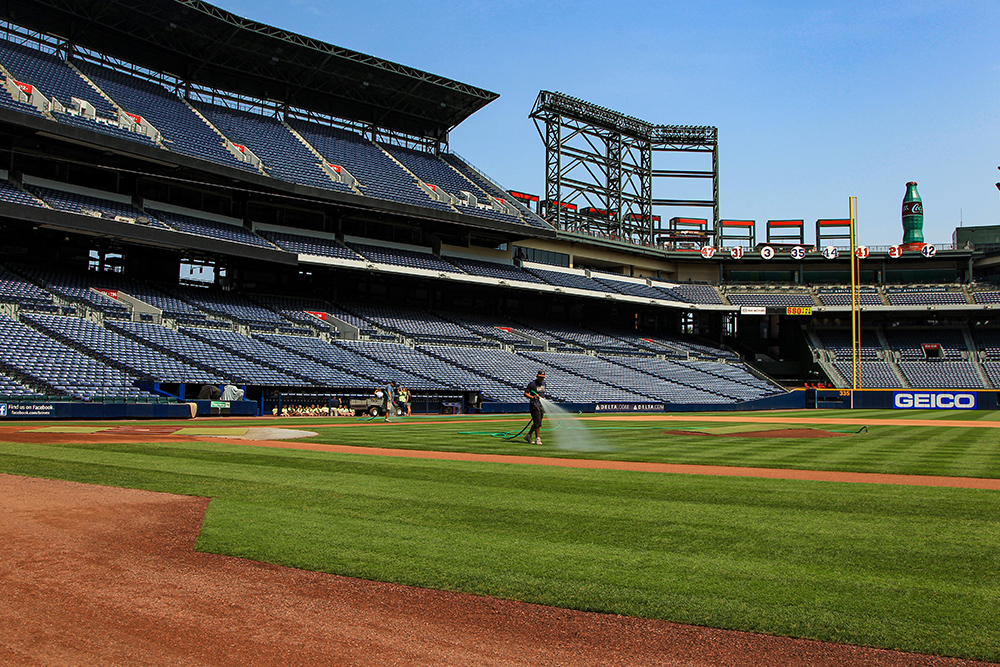 The grounds crew prepares the field hours before the baseball game between the Mets and Braves at Turner Field. (Photo: Gordon Donovan) 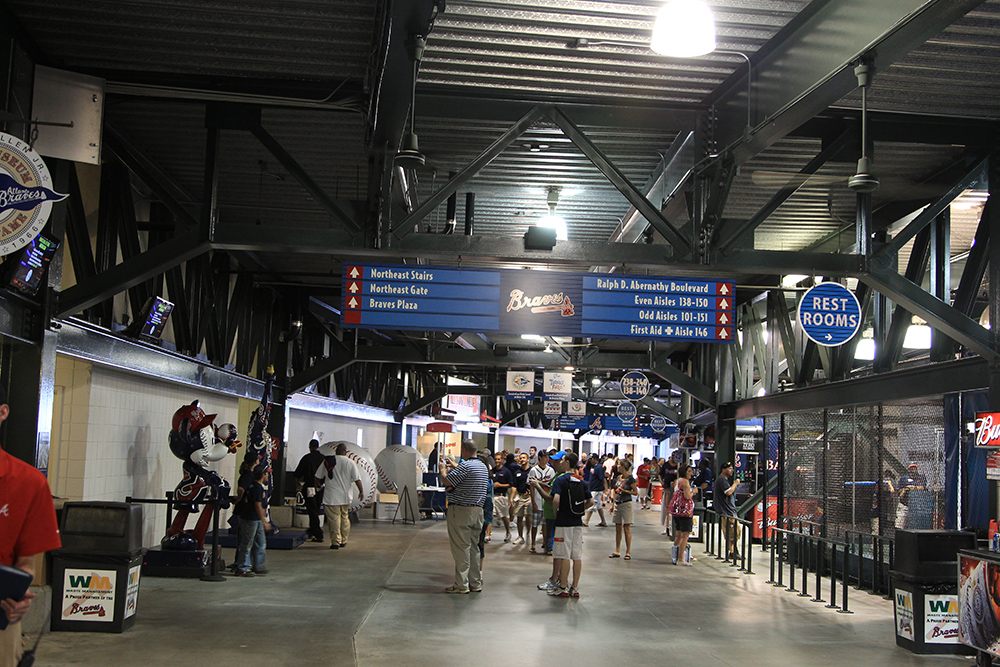 The concourse is wide and offers a wide variety of food. Fans are able to see the action on the field while grabbing refreshments and food. (Photo: Gordon Donovan) 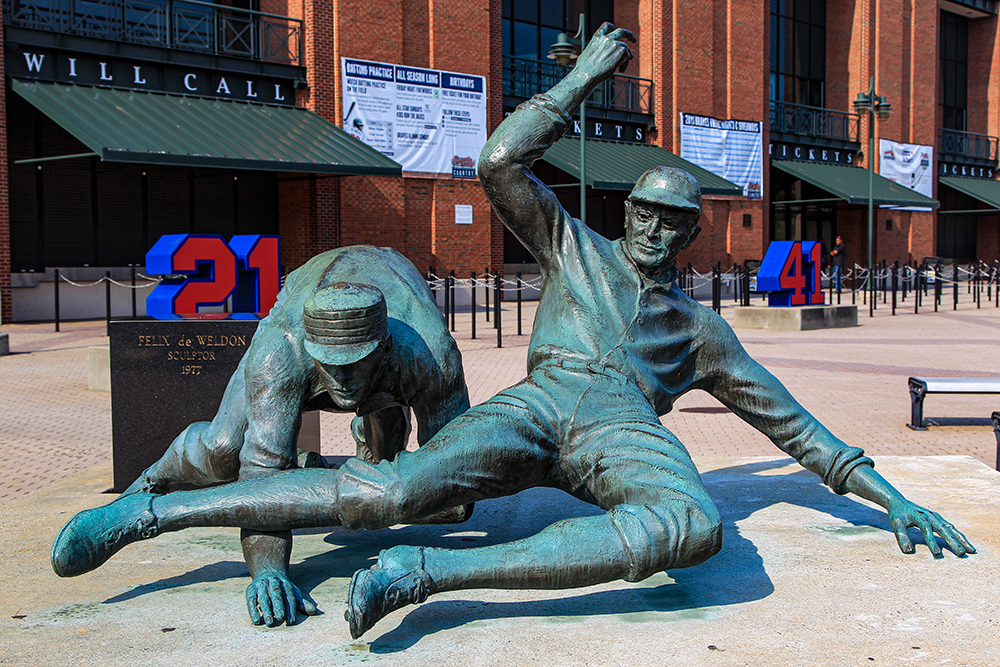 Outside Turner Field are statues honoring many Braves all-time greats. Here is a statue of "The Georgia Peach," Ty Cobb, Born in Narrows Ga., Cobb is widely regarded as one of the best players of all time. (Photo: Gordon Donovan) 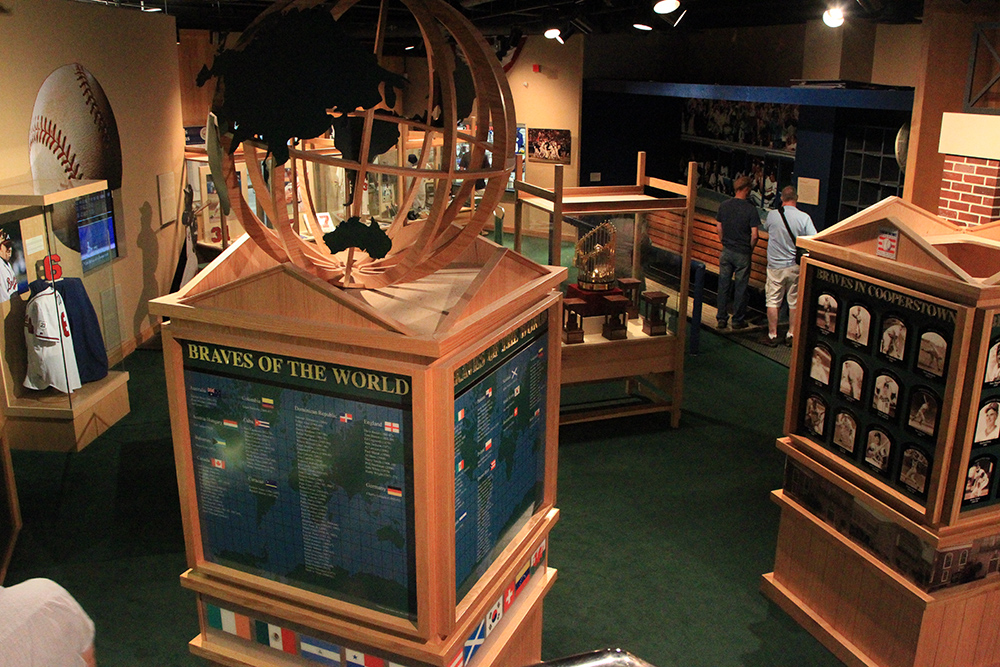 The Braves Museum & Hall of Fame is one best in all of baseball. It showcases artifacts and photos from the team's beginnings in Boston in 1871 and their days in Milwaukee from (1953-65) to the present. The display case in the center contains the Atlanta Braves only World Series trophy from 1995. (Photo: Gordon Donovan) 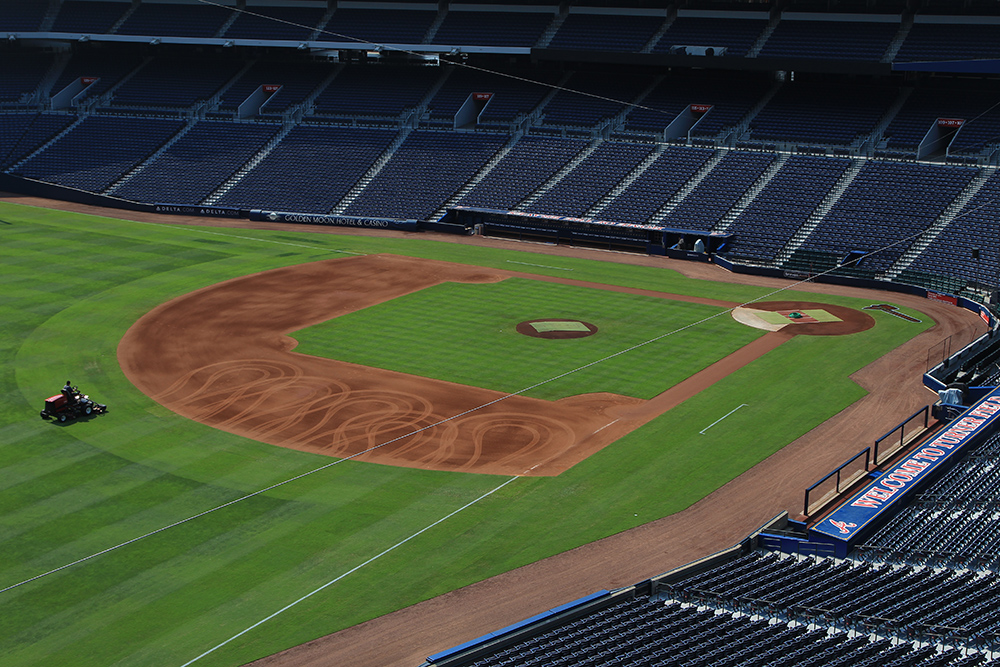 If you can afford a luxury box, here is the view from exterior seating. There's plenty of foul territory for players to track down pop ups. (Photo: Gordon Donovan) 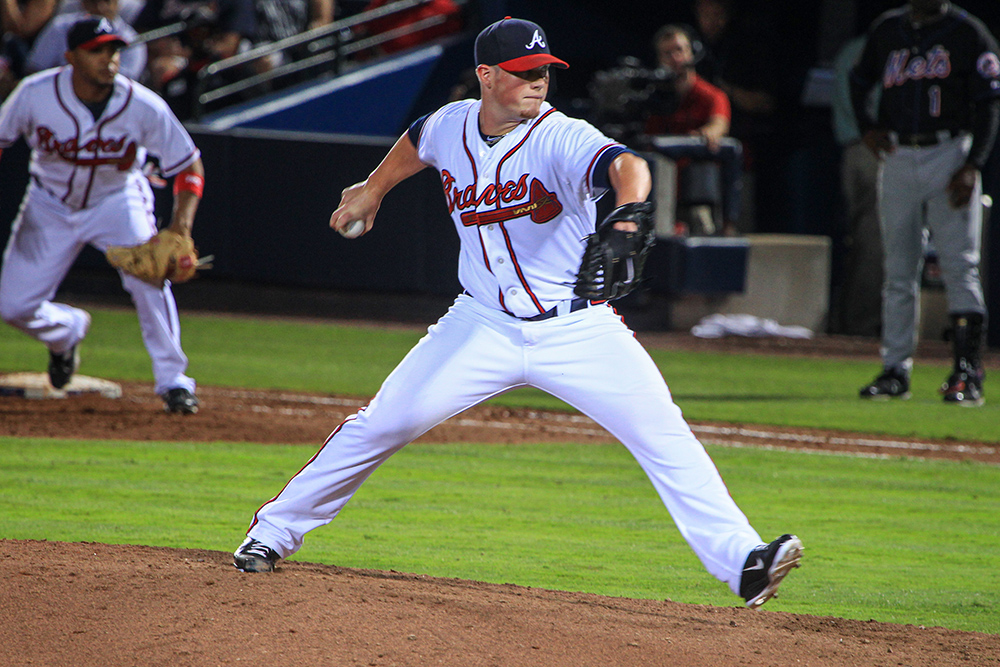 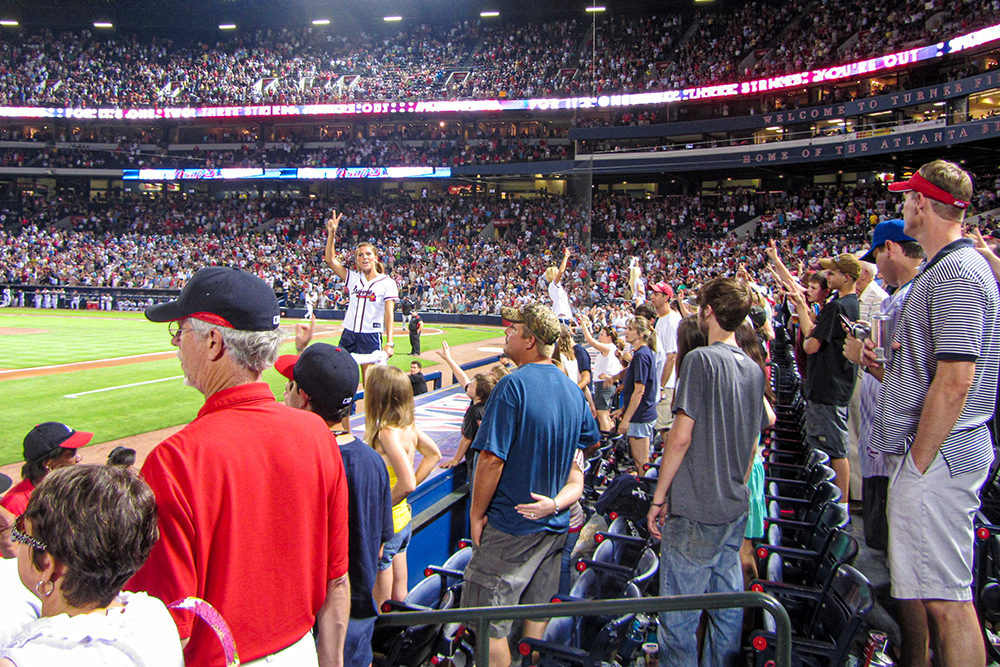 Fans stand for the 7th inning stretch during a game between the Mets and Braves at Turner Field. (Photo: Gordon Donovan) 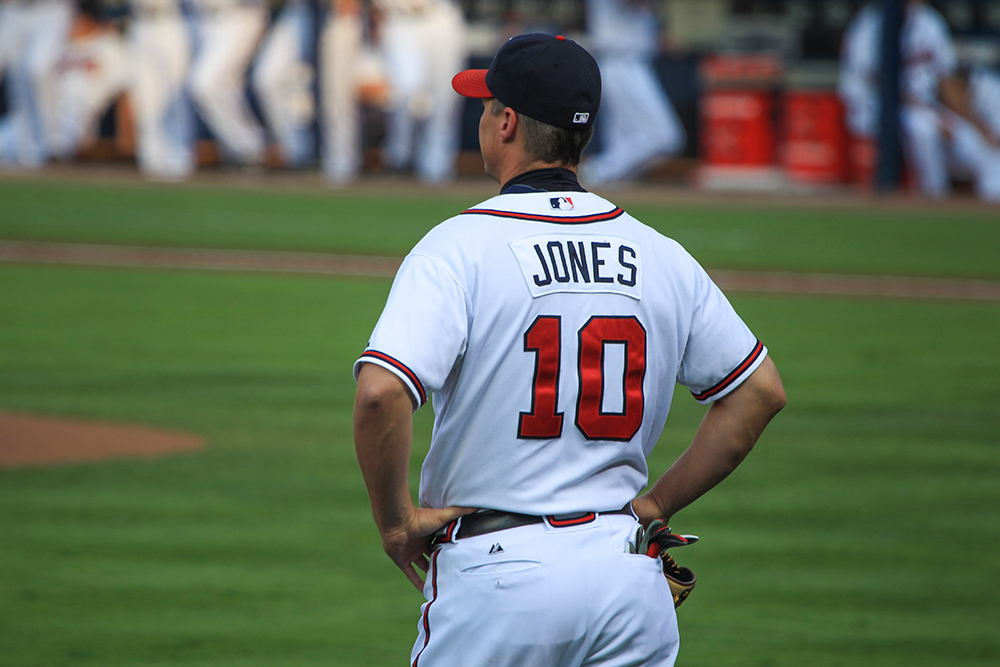 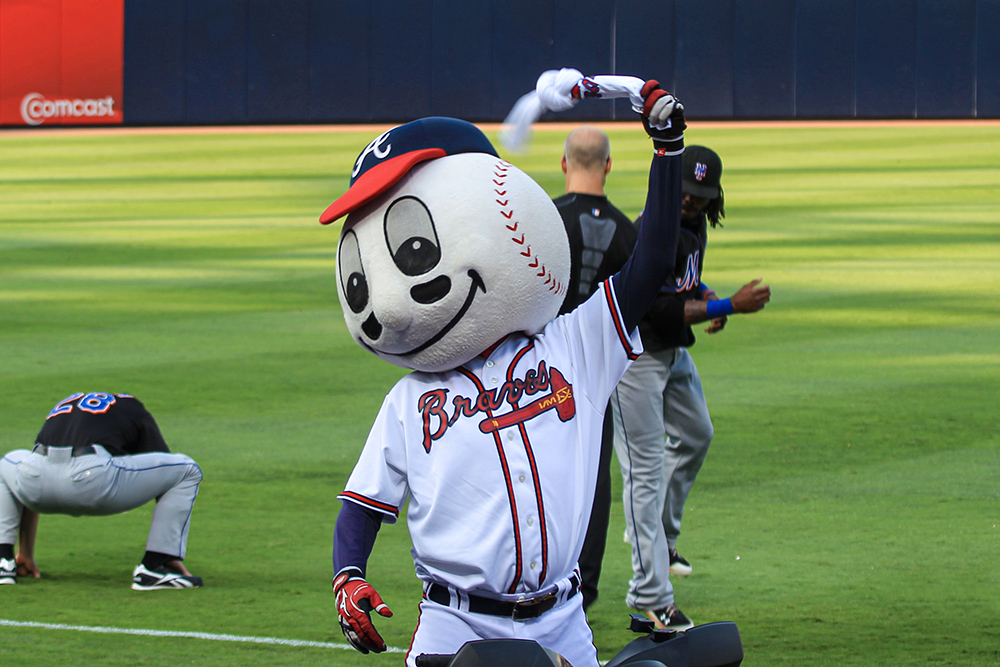 "Homer the Brave", the Braves mascot who drives around the field before the game on ATV. The team stopped using their Native American-themed mascot, Chief Noc-A-Homa, in 1986. (Photo: Gordon Donovan) 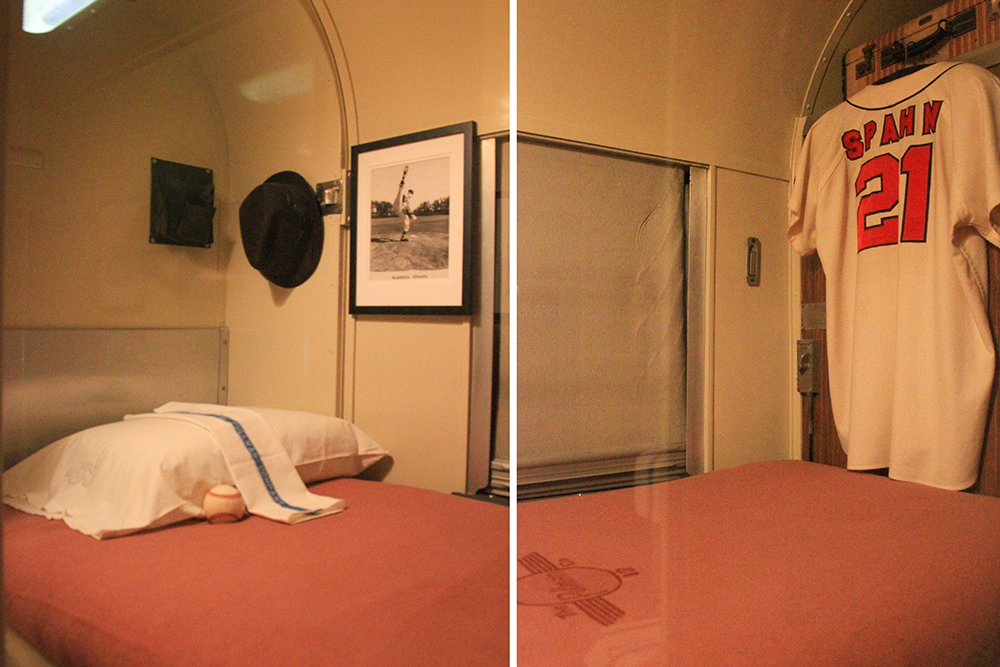 One of the awesome displays in the railroad car showing how players traveled from city to city on road trips. This side-by-side photo shows the sleeping area for players with a photo and the jersey of Braves Hall of Famer Warren Spahn. (Photo: Gordon Donovan) 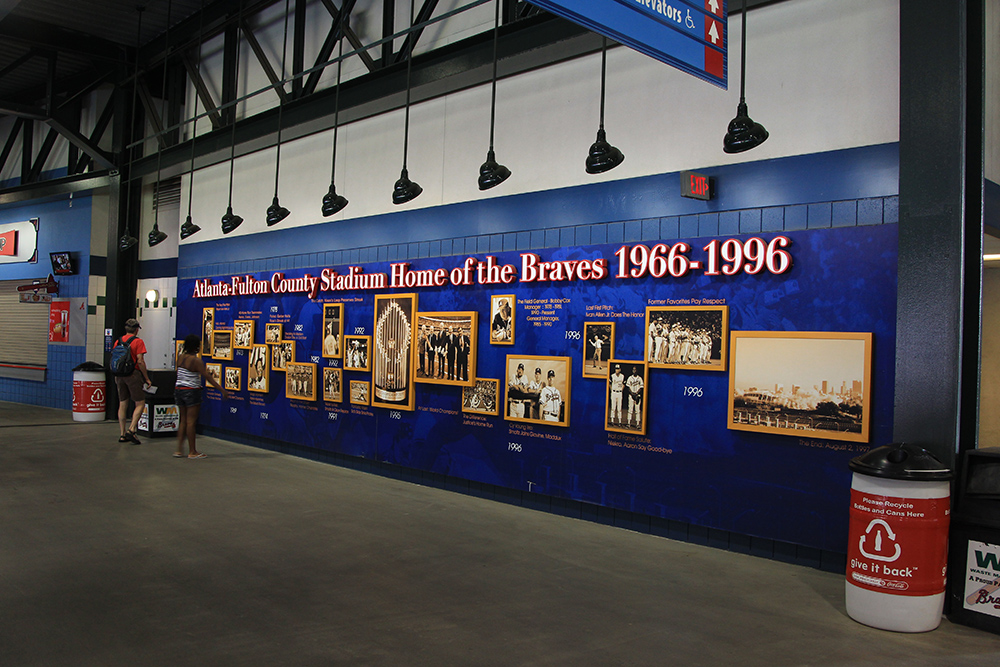 The concourse has Braves displays like this timeline of the team's history while in Atlanta and Fulton County Stadium. (Photo: Gordon Donovan) 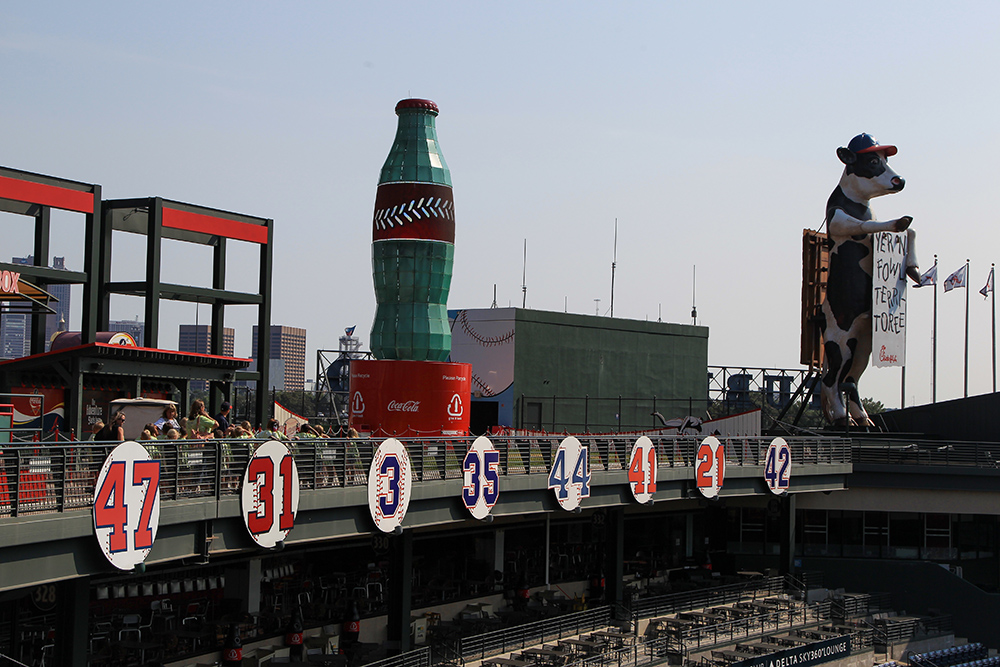 The retired numbers of former Braves greats are displayed on the Coca-Cola Sky Field. The Sky Field is a 22,000-square-foot fan attraction that sits atop the outfield roof at Turner Field and features a giant Coca-Cola Bottle, a pavilion with picnic tables and a base path for kids to run. (Photo: Gordon Donovan) 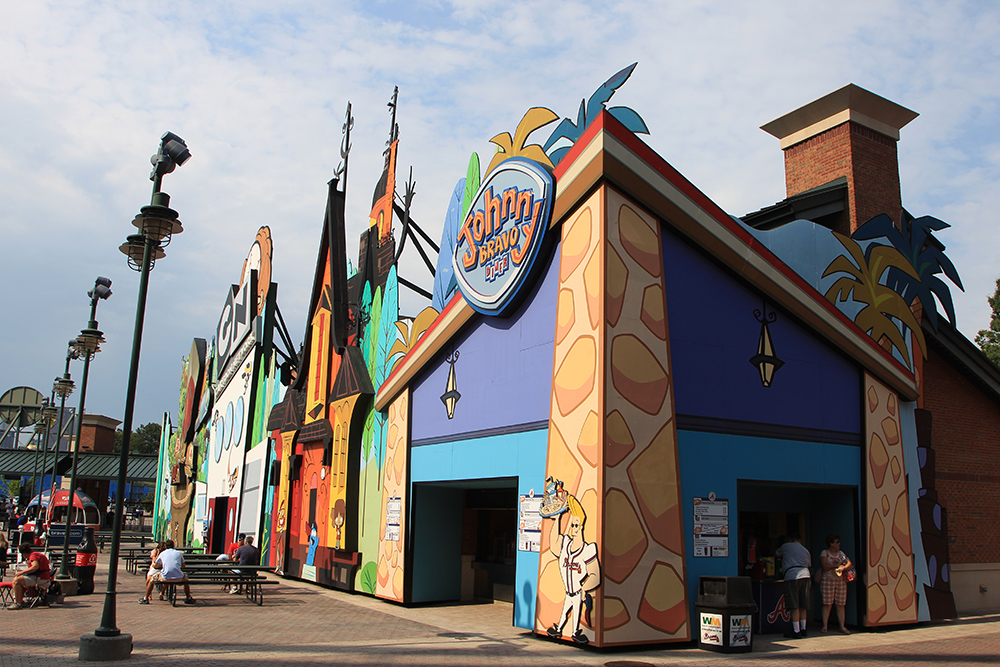 For the kids just past the main gates in center field is the Cartoon Network: Tooner Field. There are plenty of activities for children at Turner Field. (Photo: Gordon Donovan) 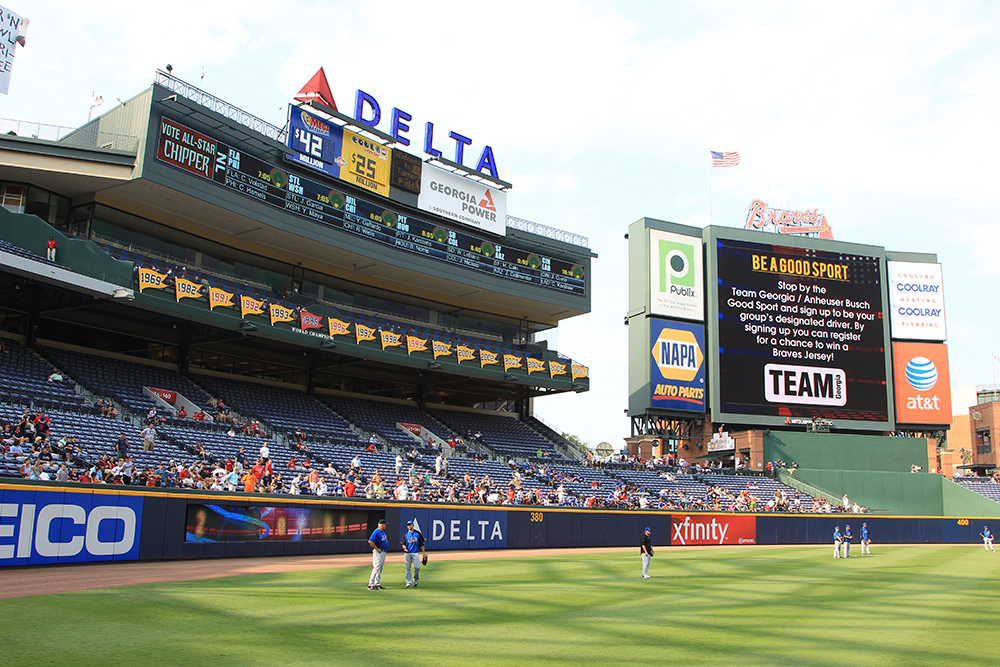 Pennants representing Division Titles, League Championships and one World Series title are posted on the facade of the upper level in the outfield of Turner Field. (Photo: Gordon Donovan) 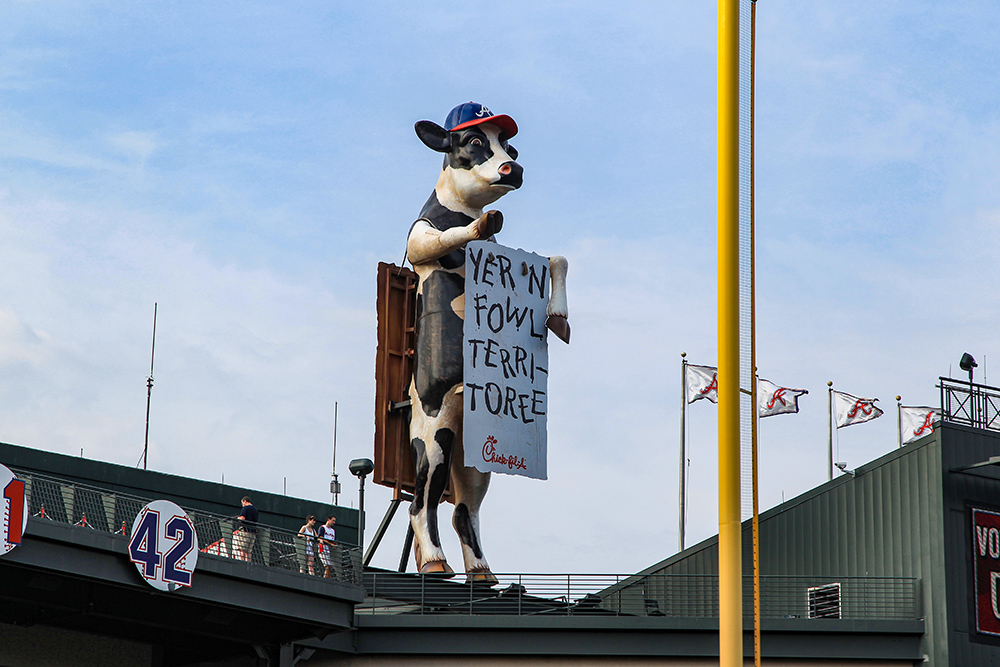 The Chick-fil-A cow ad on the upper level along the left field line above the foul pole at Turner Field. (Photo: Gordon Donovan) 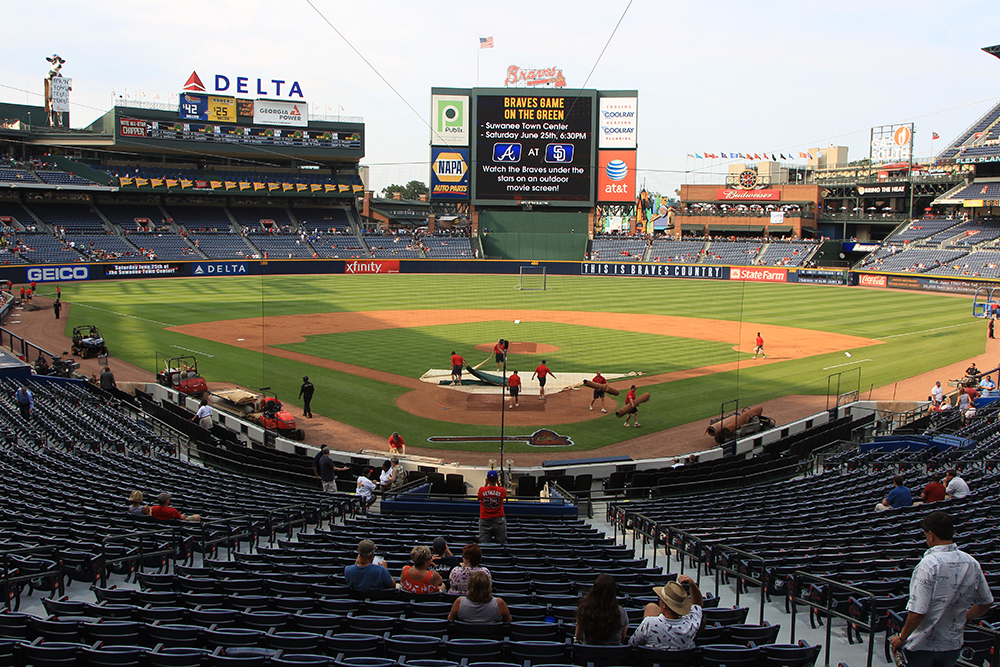 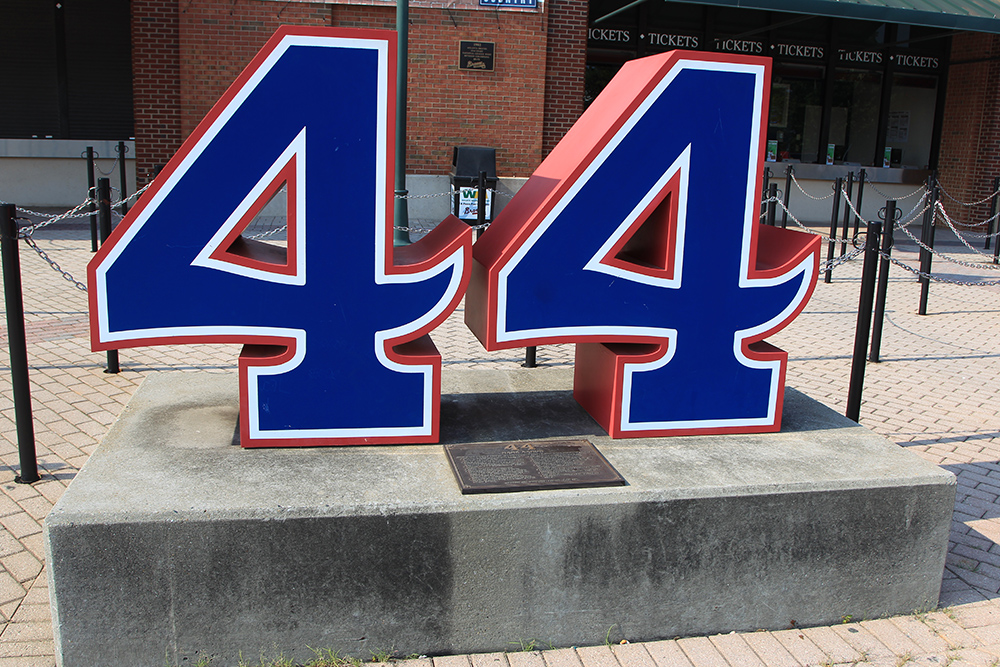 The 44 marker honoring the greatest Brave of all-time, Hank Aaron. Aaron played with the Braves from 1954 - 1974. (Photo: Gordon Donovan)


Ballpark: B - Seats are rusting, paint peeling from chipping concrete on field level. The tour was not one of the better ones I've been on, the tour guide made baseball even more boring. Plenty of stuff for kids to do, great views of the field.
Fans & Atmosphere: B - Fans are more interested in country music concerts this weekend than the current game. People walked in late and took off at the first sign of rain. Many fans act like they have won 12 World Series instead of just one title in Atlanta. Wake up! Bush league atmosphere by attacking opposing teams' history with an obnoxious video introduction. Just play baseball!
Food: B - Had a Chick-fil-A chicken sandwich and bottled water for $8.75 dollars! Sandwich was great and during the rain delay had real ice cream for $5.00.
Mascot: D - Homer the Brave. Baseball headed like Mr. Met who meets the Phillie Phanatic brother he does not talk about, but not as funny.
Staff: B - Friendly security staff when I wore plain clothes with no allegiance to any team. Next day I wore a Mets hat, shirt and was treated not as well. In between innings entertainment, "The Tomahawk Team" are the most attractive in baseball.
Team Tradition: A - Oldest running franchise in existence from the teams start as the Boston Red Stockings in 1871. Team honors past very well The Tomahawk Chop is more annoying in person. Proud of success since 1991 to present.
Location: A - Just a tomahawk chop from downtown Atlanta. Across the parking lot was Fulton County Stadium. I was warned by security and other fans that the area was dangerous.
Photos taken June 14-15, 2011 using a Canon EOS-1D Mark IV Digital SLR with a EF 24-105mm f/4L IS USM Standard Zoom Lens, EF 100-400mm f/4.5-5.6L IS USM Telephoto Zoom Lens.